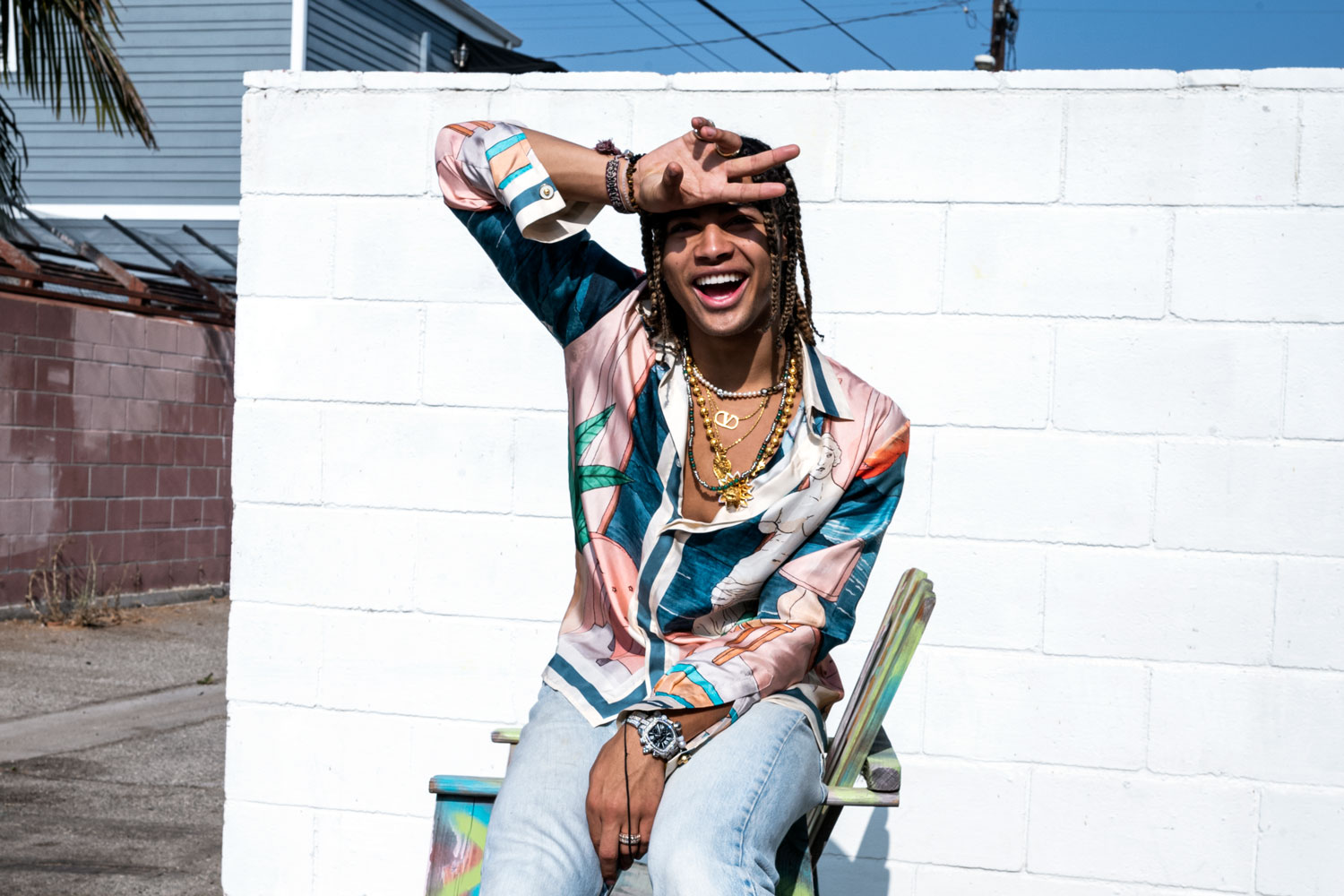 24kGoldn: “I’m trying to create a world for my fans to live in”

When 24kGoldn – real name Golden Landis Von Jones – swept his way to the top of the charts with ‘Mood’, reaching dizzying billions across streaming services, there’s no way he could have seen it coming. But that’s not to say the idea of being one of the biggest artists in the world hasn’t been there from the word go.

Right now, he’s a busy bee. Understandably, given that with success comes the avalanche of opportunity that can feel a bit blink ‘n’ you’ll miss it. Finally pinning Golden down, the Californian is sitting in a coffee shop after a “cup of tea”, he says with a cheeky put-on British accent.

When he quit college and moved to LA to truly become 24kGoldn, the plan was “to be the biggest artist in the world!” he explains. “I didn’t know how – I didn’t know what to do; how to get there but I knew if I just keep doing what I’m doing, I think it’s gonna work out.”

As with most things, “by meeting the right people, learning the right things and being open to new experiences,” it did happen. “Technically you know when it was Number 1 on the Spotify global and everything, I was the biggest artist in the world for a little bit!”

But as happens with most who travel to the top of the highest mountain – how do you deal with conquering the reasonably unconquerable?

“That’s the most important thing to me; I realised once I got all these accolades… it didn’t make me fully happy,” he ponders. “Like, alright, we got to Number 1, and we got all these plays, but what was more special to me was this song hit a chord with a lot of people – my goal wasn’t to make the number one song. My goal was to make a real impact.”

When they say there’s no rest for the wicked, the same goes for the virtuous. With his debut album proper, ‘El Dorado’, in the works, Golden is ready to take the 24k world to the next level.

“Historically, mythologically El Dorado is recognised as the lost city of gold, right?” His excitement at the explanation is palpable. “It also means the Golden One, and that was my nickname by my mom and her co-workers, you know, as a kid. Because my name is Golden – I’m the Golden One!”

Hard to dispute given the success that seems to continually appear from wherever his name appears; there’s ‘Mood’ (featuring iann dior), his feature on Clean Bandit’s ‘Tick Tock’ along with Mabel, and most recent single, ‘Coco’ (featuring Da Baby) – all turning Golden into the goose that lays… well, you know the rest.

But, trying to get the world of ‘El Dorado’ out of the mythological and into the musical, especially with the world watching, is no easy feat.

“If anybody tells you that making an album is easy, they’re a fucking liar – location switch up!” He says amidst laughter. Sweeping out of the coffee shop, he jumps into a cab.

“Especially for the first one,” he continues as buildings blur past. “At least if they’re making a good album, because it’s not hard to put ten songs together and then release it, but I’m not trying to put ten songs together. I’m trying to create a world for my fans to live in, and interact with. And I think that [with] this album you really feel that you feel like you’re stepping into another world.”

In constructing the world of El Dorado, or at least to understand where Golden wants to go with it, you have to take a look at what he achieved on his debut EP, ‘Dropped Out Of College’. An interlacing collage of genres, including another of his smash hits, ‘City of Angels’, with its slacker-guitar riff and dosing of imagery of heaven, hell and the LA in-between.

“But now that I’ve done all those different genres I don’t want to just make different genre music, I want to make something that’s cohesive. This is my album – my debut album – so I want it to be a blend of all the different things I learned while making those other types of music. It’s got a unique sound to it that you’re not going to be able to hear anywhere else.”

Golden’s pop bangers are perfectly suited for an escapist world; they’re coated in the truth of his voice while never take things too seriously; there’s always a beat to latch onto, or a hook to sing continuously for days on end. However, Golden wants to be a part of that escapism for his fans, hence the construction of his new world in ‘El Dorado’.

“The internet has been a gateway for me to connect with my fans on a more personal level than ever before,” he says. “Like, no other time in history has any artist been able to press a button on their phone, and instantly connect with thousands of their fans in live time and have their fans watch them give a review of a chicken sandwich!”

Sarnies aside, he knows that it’s important – especially in these crazy days – because “it allows people to remove themselves from whatever situation they’re in temporarily and just vibe with me. My good energy rubs off on them because it’s contagious! Even through the computer screen.”

But how far does this energy go when you’ve achieved one of your career aspirations at such an early point – and young age to boot?

“It was bittersweet,” he sighs. “It’s like, if I had worked for ten years and got it, that’s one thing, but literally like I did it so early on in my career, and so young. I’m like, fuck, what do I do now?!”

A very good question that we have to wait for an answer for as he’s just hopped into the elevator in his hotel. A couple of minutes later, glitching back to form, the answer turns out to be giving back – as well as making the “best music [he] can possibly make”. Obviously.

“I want to inspire the world with fashion too because that’s something that I’m really passionate about,” he continues, “and just give back in a more literal sense. It’s one thing knowing you could do something, but actually doing it? I know that I would not be in this position, if it wasn’t for scholarships, if it wasn’t for, you know, my mom’s union paying for me to have daycare as a kid so that my parents can work to put food on the table.

“If anybody tells you that making an album is easy, they’re a fucking liar”

“If it wasn’t for these free after school programmes I could have had a very different life path. I know how big of an impact something like that can make, so I just want to keep feeding into that and pay it forward for the next generation.”

It’s not hard to see Golden as someone with a deep sense of humility. He’s barely turned 20 and had one of the biggest songs of the last year, continually racking up plays like a broken Tesco meat-counter ticket machine; and he’s still ready to give back.

“You can blame my mom for that because she is the sweetest woman ever,” he earnestly smiles. “She’s literally a saint. I have no idea how she does it, but that’s like sank into me since I was a little kid, so I’m always looking at the glass is half full. I give a lot of credit to my parents, they’re probably top five best parents of all time!”

He’s also someone with innate confidence – which surely being given the name Golden was in itself a sign of things to come. Thinking back to a visit from one of his old high school pals, the serendipity of it all sitting with him even now he recalls:

“He came and visited me back when I moved to LA, a couple of years after stuff had already gone well, and I asked him, ‘Yo, how did I change since high school?’ and he said, ‘Honestly, bro, you didn’t really change that much. You were all this always this confident, and nobody knew why, but now, I guess it kind of makes sense’.”

Undoubtedly whatever the future holds for 24kGoldn, it all seems to have been written for him already. He’s the one with the golden touch, and in his own way, he sees it as written in the stars.

“I’m a big believer in alignment, and you know, manifesting and faith and making this happen because I have so many blessings in my life,” he says with more humility. “I would be very ungrateful if I was just like ‘Yeah that was on me.’ It’s never all you.”

Taken from the March 2021 edition of Dork, out now. 24kGoldn’s debut album ‘El Dorado’ is due later this year.