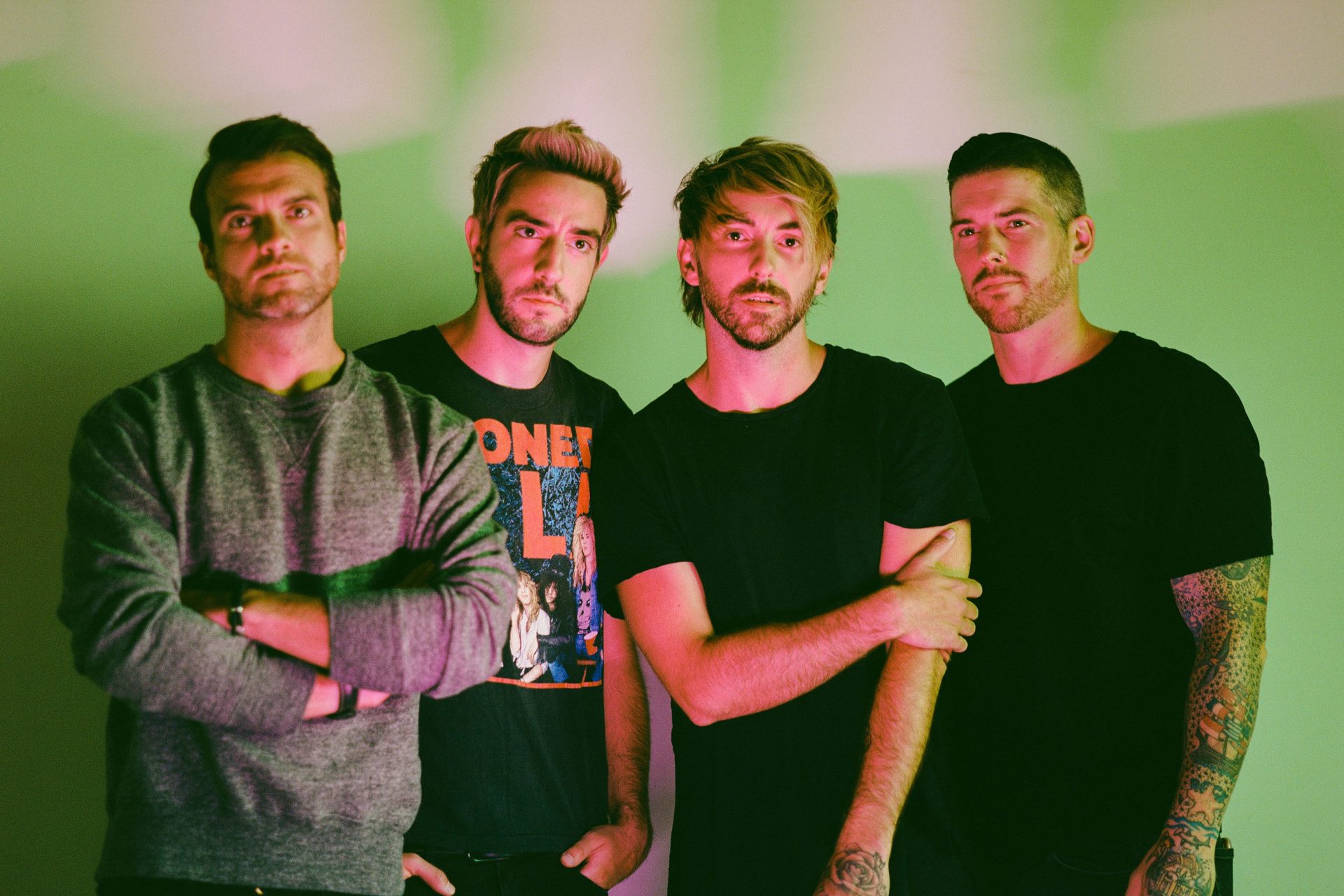 All Time Low: “I’m a huge fan of Pale Waves; I love their music, and I love what they do”

If you were to ask us who All Time Low were going to collaborate on a single with this summer, it would have taken an awfully long time before we guessed Pale Waves, but here we are.

The news of two acts coming together in the name of creating glorious bangers is always – ahem – music to our ears. Indeed, the meeting of US pop-punk titans All Time Low and Dork faves Pale Waves couldn’t come at a better time. Finally, the world’s opening up and the sun is shining, but closer to home for Alex Gaskarth and co., they’ve been continually making waves since releasing their eighth album ‘Wake Up, Sunshine’ back in March 2020, as well as dropping recent surprise single ‘Once In A Lifetime’. Now, with Heather Baron Gracie tagging along for their new track ‘PMA’, we nab Alex for a chat to find out a bit more about how and why these two worlds collided. And sausages rolls. Obviously.

Hi Alex, you’re back! Again! Another new track, what’s that about?

We’ve been writing for what feels like a body of work. We still haven’t fully figured out what we’re going to do with that body of work yet, or when it’s going to come out, or in what form, but at the same time we’ve been plugging away making new music, and ‘PMA’ was kind of born of the same, or around the same time as ‘Once In A Lifetime’.

Lovely. What was the decision in getting someone to jump on it?

We realised early on that it would be a really cool song to get someone else involved, and I sort of heard it as a duet. It’s about loneliness and experiencing everything that transpired throughout the pandemic in the lockdown. I was hesitant to write that song at first because I felt like it was a little bit too easy and a little bit gimmicky. There are lots of artists writing songs about the pandemic and lockdown, and in some ways, it feels a little bit old hat, and this story has been told, but at the end of the day, these are my unique experiences, and these are my feelings and my thoughts going through it. A big thing was about speaking to the isolation of it all and how disconnected it made everybody feel, and the rising levels of anxiety that stemmed from that. That’s where we landed with what the song was about, and because of that, I thought it would be cool to share the crux of the song about loneliness and disconnection, and feature someone else from our world.

The feature came together really well. I’m a huge fan of Pale Waves; I love their music, and I love what they do, but we’d never met or worked together on anything before; it was just this beautiful moment. We managed to get in touch because we had some mutual friends in the industry, and I found out that she liked our band, and I obviously loved their band. It was that nice moment of being like, yeah, this is cool, this is something to work on together. What was really nice was the timing worked out great by the time we got around to actually having her come in and cut the song. We were both vaccinated, and things were starting to lift and return to a little bit of normalcy, so we got to finish the song coming out of quarantine. We got together in the studio out here in LA with our producer Zach; we got to go through everything together in a room, which was my first time since everything shut down, working with another artist or another band in person. It felt really good.

What was it about Pale Waves, and Heather, that felt like the right fit?

For me, Heather has such a unique voice and brings such a cool thing to anything she lays her hands on. She sounds like no one else; that’s a really cool, unique thing. I have a real soft spot for everything she does in music. I think she’s just super talented, and her band’s great. At the time we were making this music, I was listening to a lot of Pale Waves’ new album, and it was one of those things where I was just like, I’m a huge fan, we’ve got to work together.

Did you have a moment of mutual admiration then?

It was really fun, we both sat there, and kind of gushed to each other about how much we liked each other’s music. We gassed each other up so much that we worked on the song, and then we actually ended up writing another song together, starting something else. I think music that’s born of really natural connections and ties like that is always really fun and interesting, so it was cool to dive in and write something together. There’s more in the chamber, and I think we’ll have to go back and finish that at some point, but it was really fun, and the creativity was flowing.

Oh my gosh, we were just talking about this yesterday. I absolutely love ‘When Did I Lose It All’ from their first record. I was talking to Heather about this, and she was like, ‘Oh that’s cool, nobody ever says that song!’ But I think it’s one of those things where to me, it’s got this quintessential like 80s ballad vibe to it. It just feels like such a moment in time. It feels like it should be on some classic 80s film soundtrack during a sad scene, and it paints such a great picture. I love that one, and then ‘She’s My Religion’ is such a well-crafted song. I love those two so much.

Did Heather mention her fave All Time Low song?

She did, actually! She texted me the other day, I guess she was diving into our back catalogue for whatever reason, and she sent me a little screenshot of ‘Break Your Little Heart’, and she was like ‘Oh my God, when this record [2009’s ‘Nothing Personal’] came out, I loved this song so much, she was like gassing me up, I felt cool

Weirdly, it sounds like recording ‘PMA’ was actually the opposite of what the song’s about?

Yeah, 100%. I thought that was a nice juxtaposition with the themes of the song and feeling isolated and lonely, and anxious in your loneliness. This whole song is about just sitting around and stewing in your own thoughts, your own swirling anxious thoughts, and in that sense, it was nice to break the fourth wall in certain ways and make the song collaborative and a reflection of getting through those tougher times.

In the song, you mention wasting time watching “Jeopardy and late night tv” – that sounds familiar.

I would find myself just sitting there watching something I knew that I didn’t even care about. I fell into this hole of not watching a series that I actively want to watch; I’m just sitting here watching late-night TV and being like this is really cheesy and telling myself that and be like, I’m not even enjoying this, what am I doing? It’s that sense of killing time, you know what I mean? It felt very purposeless, and I was just floating from moment to moment and finding something to stare at while I was doing that, but it wasn’t necessarily about actually engaging and investing my time wisely. In the second verse, there’s this line about ‘I don’t mind the fireworks that keep me awake’, and like back in 2020 at the beginning of lockdown there was all this weird stuff – at least in the US news, I don’t know if it was happening in Britain as well? – but there were all these weird accounts of people hearing fireworks at night, and there was no reason. It went on for a few months; I was like, why are there fireworks going off in the morning on a Tuesday?

We did not have that!?

You’ve got to Google it; I don’t think that anybody figured out why they did. People just got collectively bored and looking for something to do, again, in lockdown, and caused by the isolation. But it’s just all these little moments that hark back to that first feeling of, wow, we’re really disconnected, and we really are just kind of killing time here.

What was the epitome of killing time for you, then?

It was kind of early on, to be fair. It was when I got halfway through Tiger King, I was like, this is absolute trash; what am I doing?! On this weird societal level, it kind of spoke to the whole moment. The entire world was talking about Tiger King, and at the end of the day, when you look back now, it was so dumb.

You’re back on our shores soon, exciting!

I know, it’s unbelievable. Even up to this point, it’s all been sort of a moving target. We’re taking it day by day because obviously, the situation in the UK is different from the situation here in the States and realistically speaking, it all feels fairly tumultuous still. But you know, everything we’re being told is that by then we should be good to come over and we should be good to play these shows. I hope people continue to get vaccinated, and we can make this as safe as possible, and yeah, I’m looking forward to it. We don’t go long without coming to the UK for shows, and it’s been over a year at this point, and I’m jonesing. I miss my homeland, and I miss the energy of those shows. It’s nice to see that people are so excited and as ready as we are.

What have you been missing about the UK?

Oh, man. Gregg’s sausage rolls, big time. Again, the energy of the shows, the UK has always really been not even a second home, like a first home. We got bigger in the UK than anywhere else first; the UK took us in and made our careers something special, and that’s something that we’ve really placed a lot of importance and emphasis on. It feels like coming home. I mean, for me, it literally is, but when we go over and take a stage there, it feels like we’re landing where we’re supposed to be, and that has always felt very special to me. I’m looking forward to seeing my family when we get back over there; most of my family still lives in the UK, so it’s always like a great opportunity for me to pass through everybody’s hometowns and say hi. What else… I mean, a good cold Carling is always a welcome friend in my life. So, sausage rolls and beer!

Taken from the September 2021 edition of Dork, out now. All Time Low’s single ‘PMA (feat. Pale Waves)’ is out now.