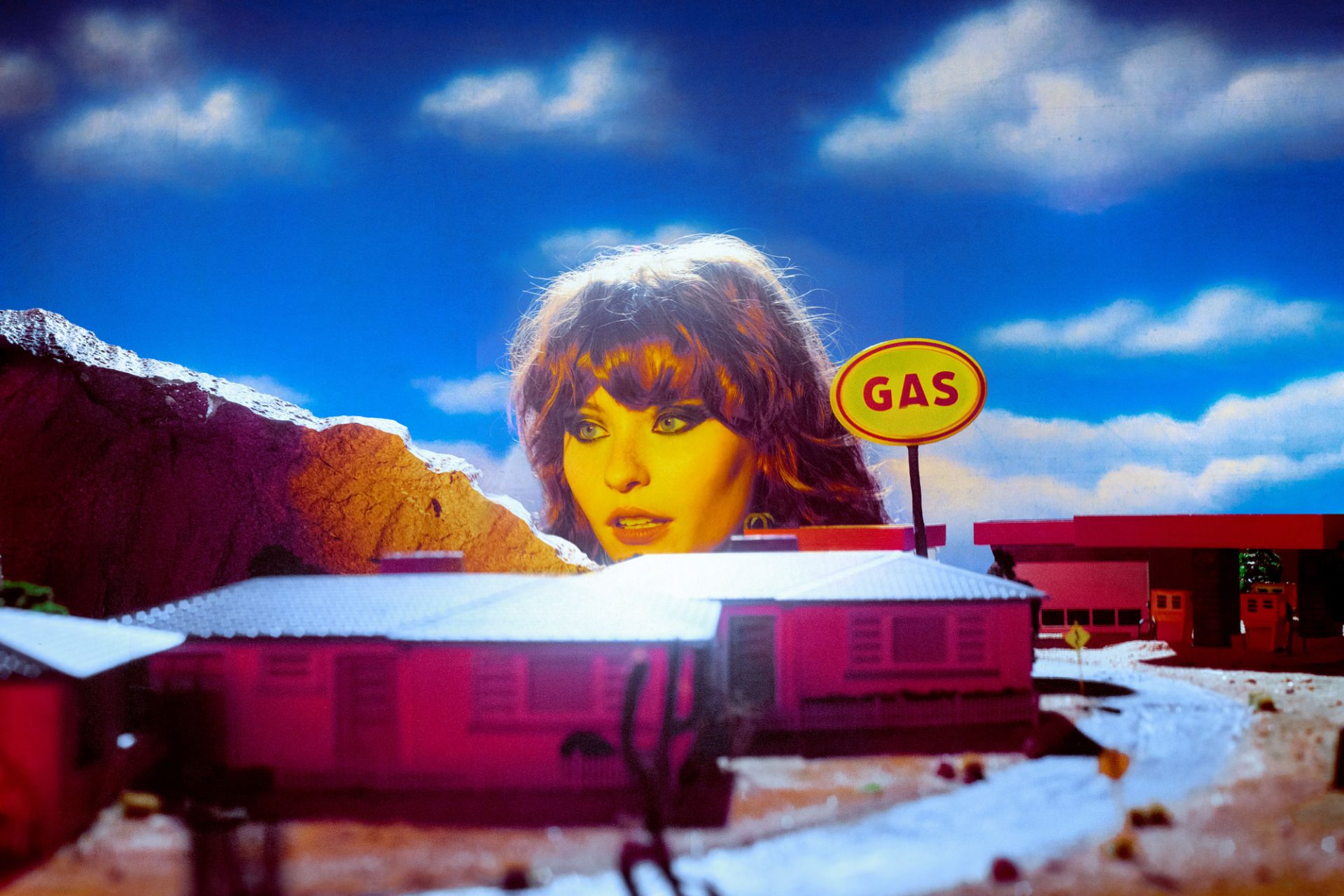 Allison Ponthier: “I was going through a major identity crisis. I didn’t know who I was”

With her first track ‘Cowboy’, Allison Ponthier announced herself as an icon in waiting. With its follow up ‘Harshest Critic’ out now, we caught up with her for a quick introduction.

“Just imagine if I just started sobbing uncontrollably right now,” exclaims Allison Ponthier. Through laughter, she’s calling back to a moment that showed vividly what an artist can become: one with words and a story that can capture something within that you’ve desperately been trying to say but have been unable to put out into the world. “It was my first ever big concert, and it was Lorde playing the Barclays Centre in New York. She played ‘Writer In The Dark’ and like, I wasn’t even a huge Lorde fan at the time, but I wanted to see her live. So she played the song, and I just sobbed my eyes out.

“That was a huge moment for me where it was like, I need to be an artist. I’d love to do that, play that venue even, and have people with their phone lights up – because that was super special to me. I tear up about it now just thinking about it. I can’t believe how much that impacted me”.

That ‘special’ is something Allison Ponthier has managed to capture right from the get-go. “I think when you put out your first song, you have a lot of expectations of what’s going to happen, but I just wanted it to be out,” she admits. “I think having a song that is so autobiographical does a really great thing for me because I feel like people can just listen to the song or watch the video, and they can understand me better. Much better than how I can describe the words or even from meeting me for the first time. It’s kind of a blueprint of how I think and feel.”

With ‘Cowboy’, Allison has laid out her soul for the world to see. A personal-yet-inclusive modern country classic full of swooping cinematic warmth, there was no other way for Allison Ponthier to step into that spotlight. More than just a great first impression, it represents a full-circle moment in the journey Allison has taken through life. Of finding who she really is, putting in the work and feeling ready to tell her story and be the self she’s always wanted to be. “It came from a painful and real place. It’s always been hard for me to find a lot of people that I relate to, and that’s been the best thing that’s come out of this. That people who can relate, relate to it – and it’s related to way more people than I thought it ever would.”

Growing up in Allen, a city nestled towards the outskirts of Dallas in Texas, Allison’s early years were – in those free moments – spent mainly by herself. “I struggled to make friends growing up,” she recalls, “I really found comfort in having hobbies, but I would do those alone. I was a loner for a long time, I just didn’t know how to connect with other people, but I found my happy place making things! It’s really easy to feel good about yourself when you’ve made something you’re proud of, and above all else – it helped me express myself.”

It’s something Allison turns to now when a spare moment opens up, a survival skill from those childhood days that forms a key part of who she is today. “I never grew out of it. My free time is making a little alien sculpture or watching a musical, or even me pretending that I’m in Hereditary. If there’s a creative hobby you can think of, I’ve tried it… to different success levels.”

In the background, there was always music – even if Allison didn’t truly know yet how to express that passion. There were early poems (and even a song about the Salem Witch Trials, “which my English teacher still has, I’m sure!”) and singing privately to herself, but to show the world that passion was a whole other step. It took enrolling in a music school, surrounded by music and people who had that shared love for music like she did, to flick a switch in Allison. “I was inspired by the people around me and friends who had written songs,” says Allison. “I was like, ‘everyone here is really good, oh my god I need to like practice and get better’. I threw myself headfirst into trying new things.”

If music school was flicking the switch, then Allison’s next move was like turning on the floodlights. Heading straight to New York City can always be deemed as a significant moment in anyone’s life, but the phrase life-changing truly doesn’t do justice to its importance to Allison, even if there were challenges. “I fully stumbled for the first six months I was in New York. I didn’t have enough money, I didn’t know many people, and I was going through a major identity crisis. I didn’t know who I was, I had met my girlfriend, but I wasn’t out to my family or even to myself to a certain degree. There were moments I thought about moving back, and I just kept asking myself, what is happening? I wanted to move here, and I feel like… I have no idea what I’m doing.”

What followed was a huge personal time period which Allison describes as one where she needed to “put in the work”. “I needed to get to know myself more and give myself that patience and time. Then I started to get comfortable. I started to make friends. I came out to my parents, and that’s something I don’t think would have been possible if I didn’t move to New York.” It was a defining moment of accepting herself and seeing firsthand the happiness that’s there waiting to be embraced. “Being able to see queer people live their life, and not just queer people who are my age or younger – queer people in their 60s with wives and children, just living normal lives. That is the biggest thing that made me feel comfortable because I’d never seen that when I was in Texas. It was great to see that of people living their lives and being happy because I think every queer person can relate to someone being like, well, ‘it’s not that we don’t like that you’re queer, it’s that we don’t want you to have a hard life’. And I saw people who had great lives.

“I think a lot of people don’t realise how that mentally affects you to grow up in a place where you don’t see people, obviously who look like you or act like you, but just people who are happy and living their lives. You feel a little bit doomed, but I got to New York, and I was like – wait, that was a lie? I’m going to be totally fine. I’ve been like putting up these walls for so long, and I didn’t need to.”

Taking the pain and fear, but also the hope and love felt in her own personal path – no other song could have introduced the world to Allison Ponthier. “In a weird way, I’m really glad that ‘Cowboy’ came out after I had some time.” First written four years ago, Allison admits: “I wasn’t writing for other people, I was just writing for me because I didn’t know how to process my feelings. It takes time not just to know what’s going on with yourself but also time to be ready to talk about it and have other people comment on it. Now I’ve had that time, I can put it out and be like: this is what I was going through.”

Its impact has been immediate, as seen in the countless messages Allison has had since. “That really is the whole point. I think that my experience growing up, as someone who was in the closet, was made painful because I felt like I was totally alone, like an alien. It’s important for people to talk about their experiences when they’re ready because that’s what would have meant the most to me when I was younger. It means a lot because it is such a vulnerable and personal thing.”

What’s clear is that ‘Cowboy’ has set Allison Ponthier on a special path, forged in honesty and turning that vulnerability into a home of strength. “I mean, that’s it!” cracks Allison. “I’ve written over 50 or 60 songs for this project. And only one is out! There are songs that are about to come out that I love and serve a similar purpose to ‘Cowboy’, maybe not the same exact subject matter, but these are songs that make me feel better about things that I’m going through.”

Finding that vulnerability and allowing herself to be open to the world, Allison Ponthier is the sort of artist whose star is only going to get brighter. “I think when you first start writing songs, you’re like… trying to write the final version of that ‘cool if I was on stage playing Madison Square Garden and playing this song, what would it sound like?’ moment.  And that’s just not realistic. You’re starting. You should just find out what your voice is, and it took me a while to be vulnerable enough to be like, ‘Oh actually, instead of writing what I think would be like super cool to all my peers, I need to write from my own perspective.”

“For so long I’ve compared myself to other people – like, so long! I’ve super struggled with that, and the minute that I started doing my own thing was the moment that people started to pay attention.”

The world truly at her feet, Allison Ponthier is about to become a big deal to a lot of people. One word at a time.

Allison Ponthier’s debut single ‘Cowboy’, and follow up ‘Harshest Critic’ are both out now.