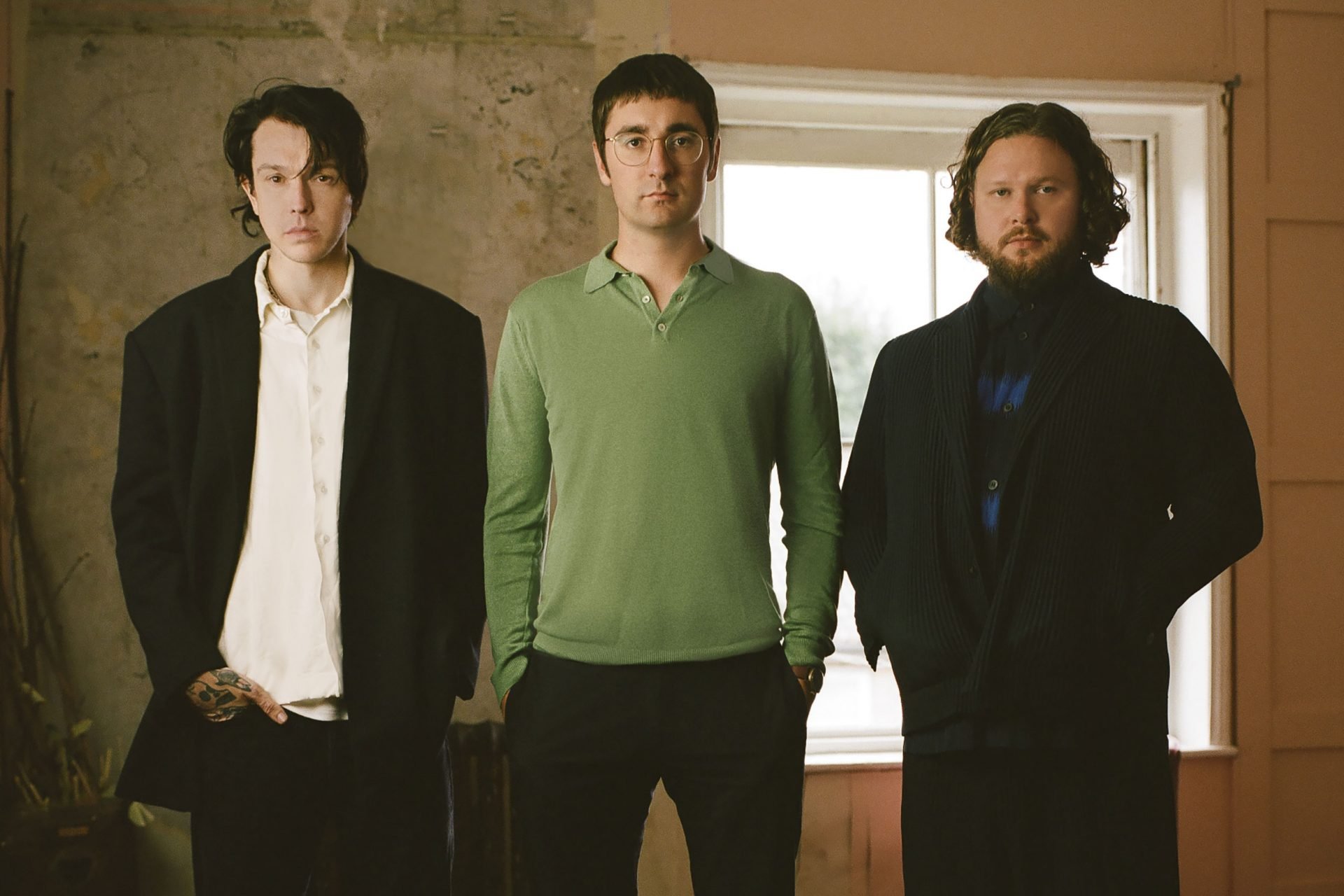 alt-J:  “That lack of outside stimulation did make us more stimulated on the inside”

With one of the albums of the year so far under their belt, and a huge UK tour currently underway, alt-J’s legacy looks more assured than ever.

Sometimes, you’ve just got to sit back and smell the roses. After ten years and four albums, a Mercury Prize win, and Number 1 hits, alt-J are living the dream. The trio have been tessellating their indie-rock with art-pop and folktronica since their debut ‘An Awesome Wave’ drowned out landfill indie like a tsunami in 2012.

While ‘An Awesome Wave’’s songs jumped from genre to genre, 2014’s ‘This Is All Yours’ and 2017’s ‘Relaxer’ tightened up the cogs for more concise efforts. This year’s ‘The Dream’ opens the floodgates for twelve flights of fancy that owe as much to barbershop quartets and operas as it does The Beatles. But ten years on from ‘An Awesome Wave’, how do they feel its successors weigh up?

“I think ‘The Dream’ is a better album,” asserts keyboardist Gus Unger-Hamilton, juggling his thoughts with watching his child in a San Franciscan hotel room mid-tour. “But I also understand that ‘An Awesome Wave’ was super special for people. We’re well aware it’s our fans’ favourite album, but we were very young when we made ‘An Awesome Wave’ and were still figuring out what was what.”

Some pine for ‘Breezeblocks’ night after night, but alt-J look to the future. While ‘The Dream’ is “more assured, and more mature” than anything before, it’s no guarantee for future form. ‘Relaxer’ divided fans like Marmite does the nation, whereas ‘The Dream’ has endeared the faithful once more. But they wouldn’t want it any other way; they find figuring out music’s mysteries fun.

“It doesn’t necessarily mean that our fifth album will be better than ‘The Dream’, it might just be that the stars aligned on this one, and maybe it’ll be our seventh or eighth album where we reach this form again, but it’s exciting. The ups and downs are part of the journey, and if we were chucking out 7 out of 10 albums each time that sounded vaguely similar, that wouldn’t be a very interesting band to be in.”

If they were looking to shake things up a bit, Covid-19 came like dropping a Mentos in a Coke can for them. Breaking habits they’d built since ‘An Awesome Wave’, they had to shake up their studio rituals – but they weren’t even sure they’d make it that far at first.

“We went from planning everything and anything, and barring a major mishap, you knew something was going to happen. We could go ‘we’re going to go play in Manila in nine months’ time’, and suddenly we had no idea because we’re talking about variants of a disease; it’s all like something out of a disaster film. When you step back from it all, it’s like, ‘what the fuck is going on?’”

The break in routine came at the right time. Rather than hop in the studio with all their eggs in one basket, they got to go back and forth when they felt ready. For the first time in a while, they weren’t pigeonholing themselves in any one sound. It also saved them from throwing in the towel.

“We had these breaks from the studio during lockdowns that let us have a bit of a mental reset and come back to the studio feeling hungry to be there again, rather than smashing all that in one long session,” reflects Gus, laughing at just how different the pandemic pushed alt-J to be. “We would’ve done that had there not been a pandemic and gotten to the point where we were all knackered and pissed off at each other, as often happens to us.”

While ‘Relaxer’ waded into internet-era pop waters and swam the channel, ‘The Dream’ travels the world in eighty days (or twelve tracks, to be precise). In fact, not being able to tour or take off on holiday meant they had to travel in different ways.

“We couldn’t travel anywhere, we were all stuck at home for two years basically, and I think that made us travel further in what we were doing musically in the studio. It was this armchair travelling thing where if we couldn’t go anywhere, we were doing what we could do, which was staying at home and experimenting with songs. I think that lack of outside stimulation did make us more stimulated on the inside.”

It wasn’t all bad. Wedging themselves in a studio sandwich between Hackney and Islington, feeding themselves on a deli they deny sharing the name of, they began to build ‘The Dream’ out of a need to escape. At a time when we were all locked in our rooms, they created a communal space both physically and spiritually, threading their family and friends through every track.

“My mum is on the album, Joe’s mum’s on it, Joe’s dad’s on it, my wife’s on it, my best friend who I grew up with arranged all the strings for the album. That was a very nice thing for us to do. It’s the kind of thing that doesn’t really matter to fans; to them, it’s just a voice or just a name. But to us, it’s a nice feeling of working with people who we love and saying thank you to them.”

Some of ‘The Dream’’s easter eggs can be found through these moments, from popping to the shop and picking up a couple of Coke cans for their friend Lance to crack open at the start of opener ‘Bane’ to recording ice cream vans speeding past the studio. It’s an ode to appreciating the little things. But if you thought ‘The Dream’ was a lofty title with lofty ambitions, unlike its songs, it was a little less thought out.

“It’s quite an arbitrary title because we just couldn’t decide on a name. ‘The Dream’ was nobody’s favourite, but everybody’s third. My favourite was Tom’s least favourite, whereas we were all like ‘yeah, ‘The Dream’ is okay’,” he shrugs nonchalantly. “We realised afterwards that so many of these tracks are different types of dreams, whether literal dreams or broken dreams or aspirations or nightmares – we accidentally stumbled on the perfect title for the album.”

‘The Dream’’s subject matter is a therapy session for split personalities. In fifty minutes, you’ll find out about the joys of drinking Coca-Cola (‘Bane’), the perils of cryptocurrencies (‘Hard Drive Gold’), the death of John Belushi (‘The Actor’), and the heartache of seeing those you love suffer through pain (‘Get Better’).

It’s the latter that’s truly transformed itself into something else. A skeletal acoustic number that nurtures itself with gentle nourishment throughout, it takes influence from vocalist Joe Newman comforting his partner through period pains as much as it does the pandemic and its lyrics of cheering on frontline workers. It’s the song they couldn’t have sung in any other situation.

“A lot of it was written before the pandemic, but it took the pandemic to finish that song. I’m not gonna say that was good luck because it would seem inappropriate to talk about the pandemic in that way, but some pieces of art need a certain time to make them happen.”

‘Get Better’ has become an unlikely fan favourite, fostering a special relationship they haven’t seen since ‘An Awesome Wave’. It’s something their American tour has opened their eyes to in world-shattering ways, Gus explains.

“I know that song has become very personal to a lot of people. We met a fan the other day in Washington DC who wanted to meet us after the gig, waited for ages so we’d sign a poster of his grandmother who died of Covid, and he was extremely close to her, crying his eyes out. It was quite incredible to see the impact a single song had on someone.”

‘Get Better’ might have become a fan favourite, but Gus, Joe, and drummer Thom Sonny-Green had all but banished the track to album-only status.

“We had to stop the gig in Seattle because somebody fainted, and we were standing awkwardly on stage, and some fans at the front shouted at us to play ‘Get Better’,” Gus laughs, finding it funny on reflection. “We were like, sorry, we’re not playing that song. People kept asking for it.

“We were like, shit. We’d written off ‘Get Better’ as a live song because we were worried it would be what my wife calls ‘a talker’. And it probably would be, ‘cause the people who are there to have a good time, have a few drinks and jam to ‘Breezeblocks’ – they’re great, but when their attention wanders, they talk loudly and forget that maybe 50% of the audience wants to hear the song. As artists, we take that as a sign that the song isn’t working.”

Since ‘An Awesome Wave’ sent them into the stratosphere, often at war with the music industry media but adored by listeners, they can lose sight of how far their sounds travel. ‘The Dream’, in many ways, has helped them land their feet back on the ground, giving them a purpose to their madness. It’s bought it full circle for them.

“When we were a band in university, we were writing for ourselves and never thought we’d have an audience beyond a few random people on MySpace. Now we’re aware we have a large audience, and we’re writing songs for them instead of ourselves.

“Sometimes you can get desensitised to it all because it’s almost too much to take in. I’ve read YouTube comments and things with people saying stuff like, they were hospitalised after a suicide attempt, and our song saved their life. It’s such a huge thing to hear.”

Like spandex-donning superheroes, with great power comes great responsibility for bands like alt-J. But talking to fans after shows in America has cemented the purpose they serve once and for all – they’re not tessellating sounds; they’re tessellating meanings.

“When you really think about what that person has been through and what they’re telling you, it’s the biggest privilege in the world. Just knowing that one story is enough to make you realise you’ve made a difference to one person, and that’s an amazing thing.” ■