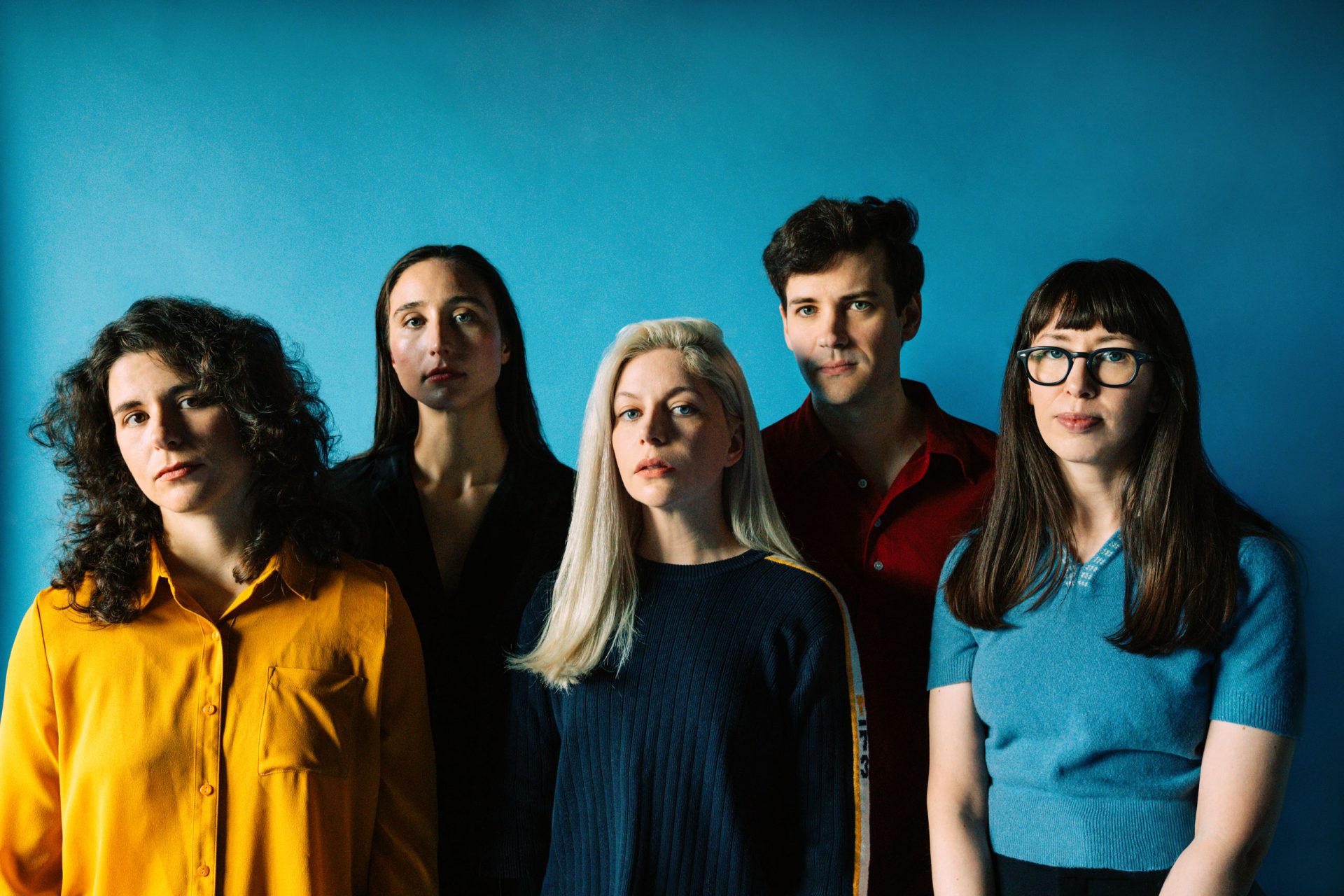 Alvvays: “I can be pretty greedy with choruses – I like big choruses”

After five years away, indie’s beloved darlings Alvvays have returned with quite possibly their biggest album to date.

Five years is a long time between albums by any stretch, but especially the last five. Alvvays released their now beloved ‘Antisocialites’ back in 2017, and just about everything since then has been transformed. And yet, there’s never been a better time to return to the world of Alvvays. Thankfully, they’re on hand to deliver – this time, it’s the all too aptly titled sugar rush, adrenaline-heavy ‘Blue Rev’. Much like the drink it’s named after, ‘Blue Rev’ immediately boosts; rushing into action with ‘Pharmacist’, Alvvays prove there’s no time to lose. Their new era has begun.

“We do take a lot of time between records,” vocalist and guitarist Molly Rankin laughs. “Alec [O’Hanley] and I are both really hard on each other and ourselves with just making everything the way we want it. We take a bit longer to sit with things and go back and forth. In that way, everything is a bit more daunting – we’re very scrutinising, and sometimes we need people around us to tell us to let things go.”

Dissecting the minutiae of the record and its every beat can be a consuming experience, but the result is resoundingly worthwhile. On ‘Blue Rev’, Alvvays are tighter than ever. It’s a fresh start and a chance to unlock years’ worth of development and build an album that transcends its predecessors. “We never intended on making anything sound bigger, but we’re definitely trying to make everything hit in a way that felt very satisfying,” Molly explains.

Though unintentional, it does sound bigger – it’s more aggressive at times, less restrained. It’s frequently in a somewhat deceptive way, too. ‘Many Mirrors’ seems soft to begin with, but it soon unleashes the full force of their creativity as the track drives home. It’s on a completely different scale.

“It took a long time to make every song feel like it was really resonating,” continues Molly. “It’s also probably our growing knowledge of the sonic spectrum. I think our first album sounds really cloudy, to me at least. There’s a whole layer of frequency that simply doesn’t exist on that album. We’ve learnt how to make things fuller over the years. I can be pretty greedy with choruses – I like big choruses. I don’t really care what genre the song is. If it has a big chorus, I’m usually into it if there’s an emotional lift melodically.”

If their seminal self-titled debut was cloudy, ‘Blue Rev’ is nothing but crisp blue sky and beaming sun. One look at the album’s high saturation cover shows that. It’s as though the album places a pair of sunglasses on that brightens the world immensely. Those big choruses Molly adores are mammoth on here: ‘Pomeranian Spinster’ is a relentless ride, leading to a gargantuan release. Everything is felt to full capacity and never dulled down, that intensely saturated quality extending far beyond the vivid primary colours of the album artwork.

The flitting, never-shy emotions of ‘Blue Rev’ are crucial and, in many ways, reflective of their career’s longevity. They’re always progressing and learning, something that applies to their emotional selves, too. “People go through so many different phases in their lives,” Molly acknowledges. “I feel like I have so many different personalities, and I’m changing all the time. It’s reflective of that – maybe one day you feel a certain way about a situation you’re in, and the next day it’s completely blown away by some revelation you have no control over. It’s crazy how things warp over time. I’m not someone who writes about their own life. I collage together different stories and imagine different worlds, and I think that has been a theme throughout our music.”

It’d be easy to take those experiences Molly and the band sing of as profoundly intimate, personal confessions. Yet, as Molly notes, there has always been something fantastical and dripping in imagination about the band. ‘Antisocialities’ imagined a world where a break-up changed the trajectory of their lives. It’s a fine-tuned skill they possess – those feelings are palpable and resonant, yet there is a layer of detachment. To craft such a rich, intricately characterised world full of specific tales and anecdotes is impressive. As ‘Blue Rev’ grapples with the person we become, there is great comfort in that stretch of the imagination.

“It’s a really nice outlet for me to have, to create different universes and different situations,” Molly elaborates. “As long as I believe what I’m singing and I can channel my feelings into something; it doesn’t necessarily have to be exact scenarios that I’m going through in life. It’s a healthy, productive way for me to draw from experiences without putting myself through a lot of pain. I think it’s important to have an enamel coating between myself and everything that gets thrown into public discourse.”

It’s a wisely protective approach, especially considering how fans demand access in a more online age. Even though the way songs manifest instead may be miles from Molly’s experiences, they still ask questions and demand answers to things we have all felt. It doesn’t have to be cut from the core of your being to be deeply evocative and personal.

Alvvays show that having that intricacy to an album is achievable beyond the expected – a fresh approach to the recording of ‘Blue Rev’ allowed them to steep it in ornate details. While usually they would take a more traditional approach, on their third album, the band chose to abandon the fastidious planning and just embrace and play the music as it was. The next challenge lay in returning to that energy and adding layer upon layer of extra gems to be uncovered in between every line.

“We’ve generally done the traditional recording approach where we work up everything, learn it, learn how to play it, go into a studio for two weeks and just churn it out,” Molly recalls. “That process seemed to maybe not the best approach, and we were hoping to expand on that. It ultimately worked out by sending things back and forth to Shawn [Everett]. But Alec has become really good at producing and recording and mixing, so things obviously fall into his hands more in that realm. As time goes on, his involvement becomes more evident, and his fingerprints are on this album a lot. Shawn wanted to finish the record with us as much as he could, and we appreciated that he didn’t have a time limit. He’s like this mad scientist who is fine to stay up all night tweaking things. It’s the first time we’ve worked with someone as annoying about that stuff as we are.”

It’s the kind of album you can repeatedly revisit without fear of getting bored; each time, a new detail presents itself. They play with dynamic, swirling around one another. Part of the process involved playing live from the floor of the studio as opposed to being in a booth, resulting in an album that sparks with real-time, potent live energy despite the level of consideration poured into it. ‘After The Earthquake’ is quick-paced, yet overlapping vocals offer at least a little calm amidst the chaos. “We’re trying to blend the right amount of heaviness and beauty – it touches on the right lyrical elements of the record where there’s this looking back on a different era of your life and reflecting on that in a healthier way.”

They dance along that line with ease – perhaps due to the combination of frenetic live recordings and precise afterthoughts. Somewhere in that intersection, they unlock this capacity for forward-glancing nostalgia. Those sometimes fictional memories allow the band to sort through their own individual stories so far and decide who they want to be when they emerge, reborn, into this new era. It imagines different paths and fizzes with uncertainty but finds comfort in that too. Hinging on that gate between two chapters might perhaps force something to be lost, but Alvvays never lose sight of that. Instead, in trying to forge new ground, they turn back to the things they know best.

“We have a lot of overlapping references,” Molly shares. “We’re fans of a lot of things that were done in the past. Trying to create that with a modern narrative might help blend those two worlds. Whenever we try to reference something, I feel like it ends up just sounding like us anyway. Deciding how modern you want your music to sound… we’ve never been a fan of expensive-sounding, spacious music where it sounds like it cost a lot of money to make – really glossy synths and digital sounding reverbs. I think we degrade things in a way that flatters our taste, and there are some lyrical elements that nod to modernity, too.”

The band recently retweeted someone proclaiming, “This new Alvvays song is happily very Alvvays-y.” It seems to epitomise what the band have done with this record. They’re meandering further afield, that’s for sure, and there’s a much wider spread of mood throughout, but there’s no escaping those Alvvays touches. Nor would they want to. Even now, when they have a much wider arsenal and undeniably bigger songs, there’s no unnecessary sheen, no people-pleasing attempts to make the album more lustrous than needs be. It’s Alvvays, as they are and always have been, just continually creating stronger and stronger records.

‘Tile By Tile’ is one of the album’s more significant offerings, with a chorus that kicks the wind out of you. It reaches newfound heights for the band but is also one of those tracks closest to the sound by which Alvvays have come to define themselves. “It’s reminiscent of some of the headspaces I’ve inhabited for previous records where it has that solitary, reeling energy,” Molly suggests. “The original demo was just a full thought. We took it down several roads, tried to make it something that it wasn’t and then reverted back to this woozy, moody verse. I think maybe the more recent element of the song is the way it explodes at the end. The lyrical approach is maybe pulled from older Alvvays, perspective-wise.”

Some things you can’t help but be pulled back to – for Alvvays, there will always be that charm about their music, something in the way they share these thoughts so dreamily with those typical jangles and joyous lifts. On ‘Blue Rev’, they enter heavier territory, but they will always have that gaiety to their sound. But most important for the band is ensuring their listeners join them on that journey – that each beat hits home for everyone. “Making sure every part of the song and the arc is felt and punctuating all of those moments that need to feel moving – that’s my indicator with songs in general. If the recording isn’t reflecting that, it needs to change until that’s felt,” Molly concludes.

Thankfully, those moments do move you. You feel every aspect of the tracks alongside the band, and the adventure it takes you on – one of discovery and remembrance and clarity – is as immersive as Molly hopes. ‘Blue Rev’ is a step up for the band. To relish in that with them makes every minute of that five-year wait worth it.  ■

Taken from the October 2022 edition of Dork. Alvvays’ album ‘Blue Rev’ is out 7th October.