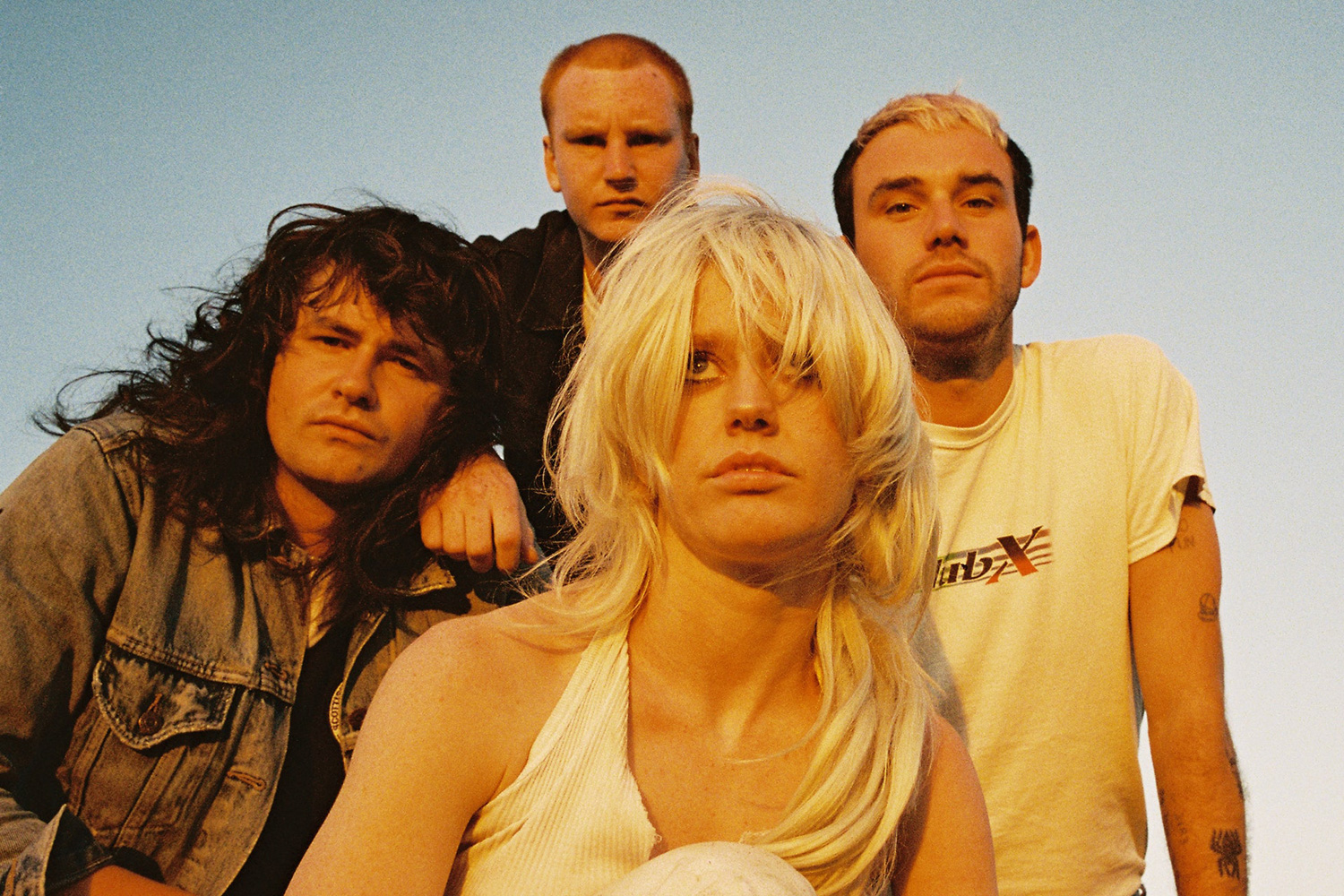 Amyl & The Sniffers: “We’re all just flesh sacks on this hell rock”

Aussie punksters Amyl & The Sniffers’ debut album made enough noise to grab attention. All eyes (and ears) ensured, they’re back with a follow-up.

Australia’s favourite punk band, Amyl and The Sniffers have just dropped their second full-length ‘Comfort To Me’ – and it has a lot to live up to.

The foursome’s gargantuan self-titled debut, released two years ago, saw them tour relentlessly and quickly garner a cult following spanning all corners of the globe. Fans quickly took to their assertive, full-throttle, no-fucks-given energy, propelling them to the front of their very own scene.

Their new opus – born during both the Australian Bushfire season and an intense but surprisingly enjoyable pandemic period “trapped together for months in this house with sick green walls” – is described by frontwoman Amy Taylor as celebrating “how weird life and humans are. The whole thing is a fight between by my desire to evolve and the fact that somehow I always end up sounding like a dumb cunt.”

Our kind of record.

Hey Amy! How have the past 18 months been for the band? Have you played any shows in that time?

We did five or four in regional Victoria, and then one in Melbourne. The Melbourne one we got to squeeze in just before midnight lockdown, which was pretty sick because people had been holding on to those tickets since the end of 2019, and we’ve been dying to play them. Everyone wore masks and shit, but the vibe was fucking good. The regional ones were pretty special because we got to see a bunch of small towns outside of Melbourne. I’ve never been to any of them; I don’t think the boys had either but [they were] classic Australian pubs, right near beaches, right near rivers. It’s pretty amazing. They’re really fucking beautiful. I remember on the first show we played at this pub which was a great pub. The guy that owned the pub, I think he got into a brawl with someone.

Before we get talking about the new album ‘Comfort To Me’, you guys had an incredibly successful debut record – how would you sum up the past two years looking back? What have the highlights been?

Before the band, the biggest show that I had ever been to was just 100 people or whatever, and I didn’t really read any magazines or anything. So lots of stuff went over my head. Juliette Lewis is a fan which I think is awesome cause she’s fucking sick. Sometimes people send you free stuff, and that’s pretty special. Seeing your picture on the cover of a magazine and playing somewhere overseas and people recognising you, or appreciating the music. Sometimes people message us being like, I’m going through a really hard time, and this music has really pulled me through.

‘Comfort To Me’ feels more diverse sonically than your debut – how did you come to hone in on the sound it has?

This album could come out, and, realistically, a bunch of people are going to hate it, and a bunch of people are going to like it. Same with the last one, we didn’t have time to stop and think about it too much because we’re so busy. I think we’re all proud of it, and it has allowed our lives to go into a pretty weird direction because none of us have jobs. If you worked at a bar and you made a cocktail, it’d be yummy, but then three years later, it’d be really yummy. You wouldn’t really notice the difference, but your customers would, and you’d feel more confident making it.

You’ve said that the album makes you think of the 90s TV show The Nanny. Tell us a bit more about that.

The main character [played by] Fran Drescher is Nanny Fine. She’s hilarious and full of life and quite a style icon. She’s living in this rich guy’s house as a nanny, but she loves him too, and she wants to get married, but she’s just a nanny. It’s very funny and very easy to watch. It’s pretty trashy, she lies about her age and wears funny skirts and can’t really cook, but she’s just fun!

Why did you call the album’ Comfort To Me’?

“Comfort to me” are the first words of the song ‘Capital’ on the album. It’s kind of an existential song. It’s saying “comfort to me”, what does that even mean? What reasons do we persevere? Existing for the sake of existing, meaning disappears. Nobody really does anything for any reason, no matter how much meaning they inject into it. We’re all just flesh sacks on this hell rock. There’s not really any meaning; we just do it to do it. But then comfort to me is a punk album, or a rock album, or speeding in a car. Naughty shit!

Taken from the October 2021 edition of Dork, out now. Amyl and The Sniffers’ album ‘Comfort To Me’ is out now.