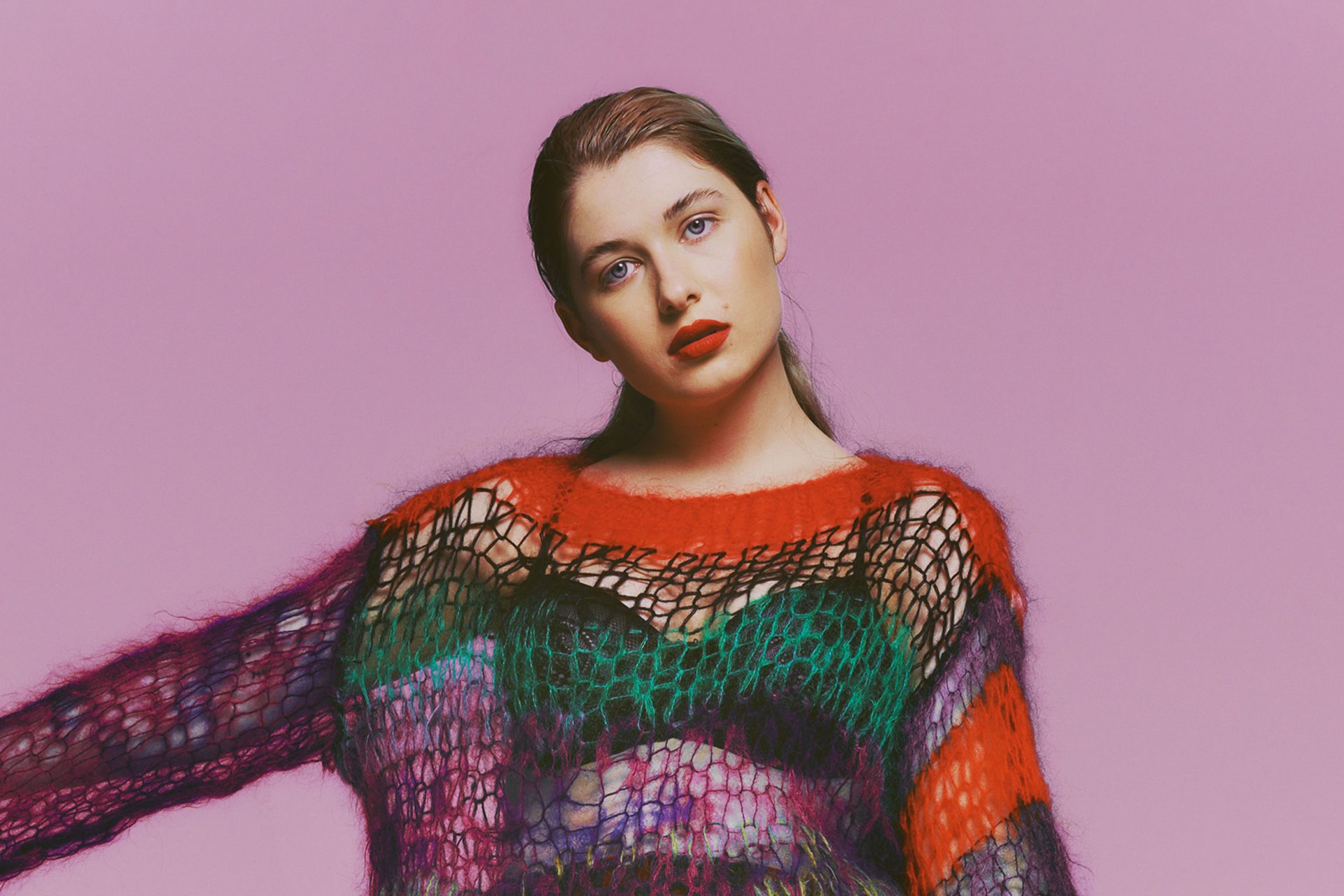 Baby Queen was already making waves at the start of 2021, when she fronted our annual Hype List. Now, she’s dropping ‘The Yearbook’ – a new collection of pop perfection.

If you have yet to stumble upon her kingdom, regal jester Baby Queen has dutifully arranged her own wondrous world of glossy anti-pop for your compulsive consumption.

Bella Latham has had one hell of a rapid-fire year, dropping glazy anthem after another and easily cementing herself at the top of the league of promising popsters with more than enough potential to change the game. Baby Queen herself is known as much for her bubbling, addictive soundscapes as for the signature pessimistic commentary buried within, and fusing these two opposing elements into such a compact package is bound to leave you exhausted. As she only half-jokingly laments through her phone, “if I could sleep for the rest of my life, I would.”

This authenticity and openness is a staple of the project, with an array of songs jumping bravely into heavily personal topics that let fans see reflections of their own insecurities. It seems that the honesty is only becoming more and more unflinching with each offering, but on the most sensitive topics to date, Bella divulges: “’These Drugs’ was very soul-bearing and kind of a touchy subject which I was scared to broach.’ Pretty Girl Lie’ is about body image, which was very close to home because of how much I’ve struggled with that growing up. Those two were pretty spiky, but I like being honest – those two were diving deep.”

Revealing that she is now keeping a list of raw statements to encourage herself to open up even more (!), it becomes obvious that these intimate themes are being navigated in a very poetic way. Poetry is, in fact, where her lyrical development began, before she discovered the Trojan horse of music in which such cutting topics can be inconspicuously delivered. As the Queen of babies herself agrees, “it’s a fun mix to put this raw honesty into a disguise of sweet pop sounds; that felt really interesting, and I enjoy the juxtaposition. It’s cool to get messages out to a larger audience who might not know the true extent and depth of what the lyric is saying until they listen a little bit harder. I like the battle and contrast between those two sides.”

Baby Queen’s music has truly landed at the perfect time; in an era that is ripe with division, uniting audiences with shared fears has been the unforeseen crux of her success, fulfilling the dormant desires of unknowing listeners in the current era. “In this specific moment in pop music, there’s a lot of demand for satirical, ironic social statements,” she observes. “I don’t think it’s a direction that you consciously or deliberately take; the climate was just right at the time for the music I was making. Hopefully, I can grow with something like that, that seems very reflective of the time – I hope I can grow with the people who are listening.”

Growth is something that Baby Queen is grounded in, as Bella herself claims to have had, “a few ‘eras’ of my writing before I found this tone and voice that defined what Baby Queen is – a tone that worked for me.” The way artists write is, of course, ever-evolving, and so she considers herself very lucky to have experienced such catalytic moments at a time when she was ready. “I can’t imagine where I’d be if something had worked out when I first moved here; those years of development alongside the same producer was huge; we never thought I’d get signed; we were just making music and growing in the safety of that – away from all of this… “

“I’m a fucking hopeless mess, seriously. Being alive is hard; being a human being is hard”

‘All this’ refers to the almighty cogs helping the British music industry to keep spinning, and jumping into that machine can be a risky venture. On this, Bella adds: “that changes it quite a bit; you have to redefine your ability to be creative within a space that is a lot less safe than in the beginning.”

In such a dangerous environment, with the eyes of the world watching, there are fine lines between pressure and prosperity, between admiration and idolisation. As someone who claims that aesthetic promotion is damaging but also endures pressing insecurities all while inflating a career, Baby Queen is no stranger to such a balancing act.

“Image… fuck. It drives me insane,” she resigns ruefully. “One thing is the music, and another thing is existing online. Ultimately, when you’re putting an identity online, it’s very difficult to put across a true reflection of who you are – how do you even begin to do that? I just reached this point of acceptance that you just have to be yourself, because that’s the person who’s writing this music and can get their message across. If you pretend to be anything else, it’s not going to connect.”

The necessity for genuine connection is all that more powerful in the pop sphere, where layers of pumping production can often serve to obscure the human responsible for the art itself. Despite reigning this arena, it is actually not a calling Baby Queen felt from the beginning but rather grew into overtime. “Pop music has a reputation of being unauthentic, of being vapid, of being devoid of raw authenticity. Pop just means popular; it’s not even a genre thing,” she exclaims. “To fear popular is a bad idea; you should instead fear a lack of substance, and those things are associated but very different. You can have something that’s popular and appeals to a mass group of people that does not lack substance; there can often be more substance in pop music than in alternative rock music.”

Pinpointing this identity took time but moving to London was a unique gift, with an exposure to diverse voices not forcing Bella to adapt but instead giving her the freedom to carve her own path. Reminiscing on the geographical journey, she says, “growing up in South Africa or really any small town, you develop into this mould of the person you’re expected to be; you never have the freedom to become who you should have been. London gives you that chance because there’s a willingness to try something new. Where I came from, anyone who steps out of the box is considered to be quite strange, whereas here you’re encouraged to do that.”

Baby Queen’s new mixtape ‘The Yearbook’ is a somewhat fictional, somewhat biographical recounting of this venture through adolescence.  “It’s an American coming-of-age film,” she definitively states. “The music felt super adolescent and coming of age, and as a person, I have multiple characters; multiple differing personalities. It’s a characteristic of growing up, and so I wanted to get across that explorative feeling. The character of me is always behind it, though. It’s the same person speaking to you, and that’s what makes Baby Queen – the words.”

Expressive verses and an established sonic home do serve to define a familiarity with Baby Queen, but she is not an artist happy to bathe in comfort, instead preferring to traverse the uncomfortable for the sake of her later self. “That’s a huge part of my personality – never being satisfied with where you are and what you’ve done, always looking forwards,” she agrees. “I find it really hard to live in the present; I’m stuck living in the future. There is another element to it that as a songwriter, you do genuinely get better – that’s proven. Fuck, I hope you get better!” Bella jests.

Feeling lost in the pursuit of her own direction defines the all too relatable attitude of Baby Queen’s core ethos, and as her thematic discussion has proven, she’s never afraid to admit being a mess. “I’m more of a mess now than I was when I first admitted to that,” she declares. “I’m a fucking hopeless mess, seriously. Being alive is hard; being a human being is hard. I didn’t ask to be born. I’m a super pessimist, but really, no one has their shit together. No one was it figured it out.” And that, ladies and gents, is the sympathisable appeal of Baby Queen.

Taken from the September 2021 edition of Dork, out now. Baby Queen’s mixtape ‘The Yearbook’ is out 3rd September.