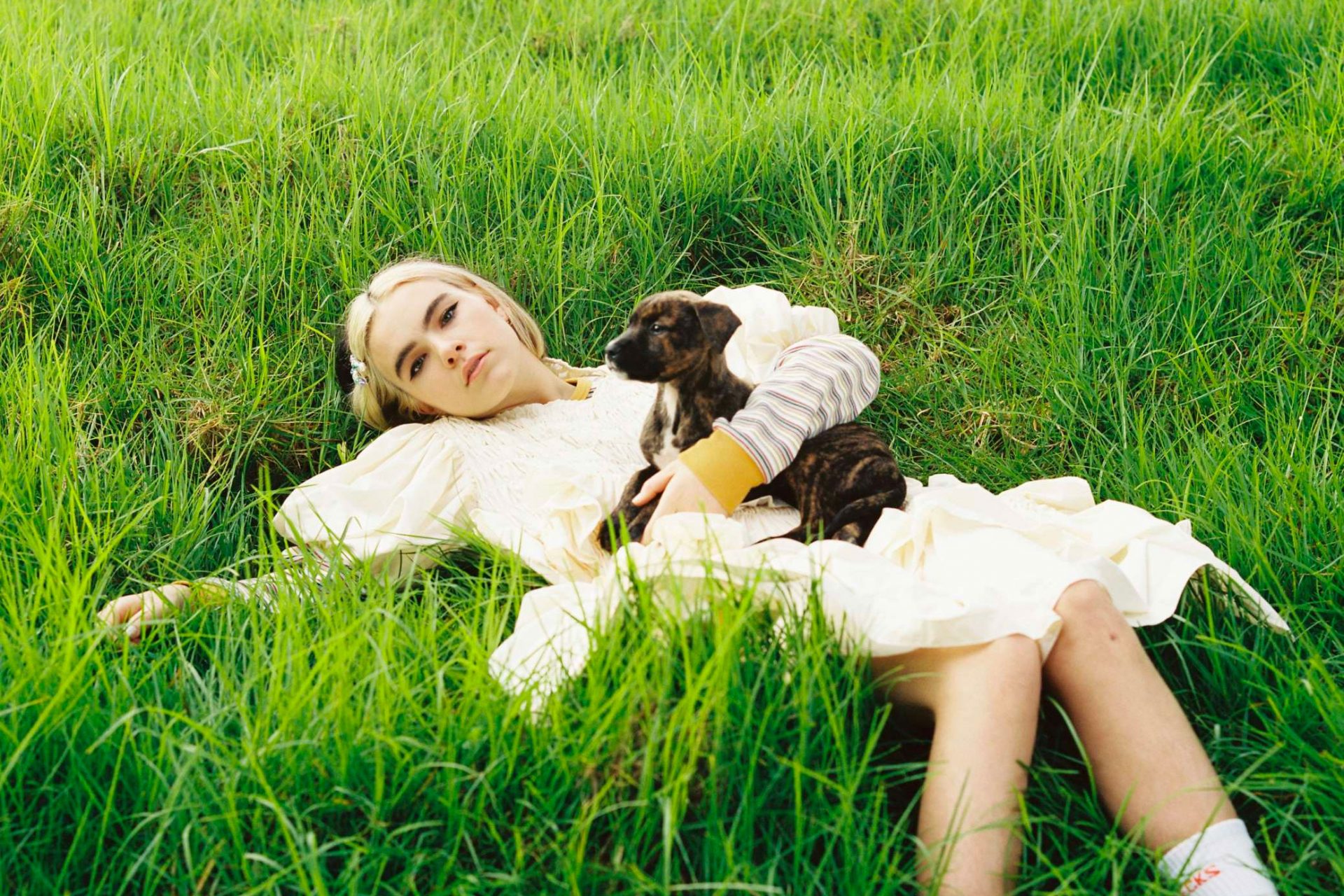 A rare bright point in a pretty damn difficult year, BENEE‘s arrival has been a serotonin shot in the arm. With her debut album finally here, the future looks brighter already.

New Zealand’s new sensation BENEE is different from your usual pop star. She loves animals, she loves swimming, she loves snails, she’s fearless and brimming with confidence and is ready to shake up the pop stratosphere while forming her own idiosyncratic world for us all to wonder in. The new pop age of BENEE is upon us.

BENEE is the creative outlet for Stella Rose Bennett whose journey into making music and creating viral hits was a relatively recent one. “I’ve always loved music and grown up around a lot of music,” she begins. “I used to play the saxophone and the guitar. It only hit me that I could do something with it in 2017. I had released SoundCloud covers [including songs by Amy Winehouse and Gnarls Barkley] which were terribly recorded into GarageBand. They had me terribly playing acoustic guitar and then I got into contact with my now-producer Justin Fountain and made my first proper song in the studio. I used to play about with GarageBand when I was 15, but nothing was ever really good. When I got into the studio, I was like, this is so freakin’ cool. Then I released a song and thought this is insane, I want to give this a crack.”

Since then the rise for BENEE has been swift and striking as she progressed from a couple of EPs released in 2019, ‘FIRE ON MARS’ and ‘STELLA AND STEVE’ culminating in this year’s success of the global smash hit turbo banger ‘Supalonely’ which has had everyone talking for months. For Stella, her rise to stardom in this particularly strange and emotionally punishing year has been a bittersweet experience. “This year has been pretty crazy,” she explains. “It’s been really good for my career but terrible in every other way. The hype that 2020 got was insane, and it’s just been a bloody shitter for everyone. It’s been pretty weird having my biggest song and also having a global pandemic and things like the Black Lives Matter movement and climate change and everything that feels so much more important and are more important. It’s been weird to find a balance.”

“Snails are really quite cute. They’re quite random”

Despite the trauma and upheaval going on in the world, Stella still had to prepare to take that jump to the next level in her career. “I realised, alright, I’m going to release an album. I kind of have to. It’s the right time,” she says. “People have found lots of comfort in music during this time, so that’s when I realised that artists have to keep working even with everything that’s going on.”

“Hey, you roll on!” she exclaims with all the youthful exuberance of someone who is not going to let adversity stand in the way of what she wants to do.

‘Hey u x’ is the sound of BENEE making her own sense of a mixed-up world. It’s hyper-modern and super resonant for contemporary times. The album is a perceptive snapshot of all the emotions, fears and dreams that our generation experiences in modern-day society. Big emotional themes rub up against playful vignettes of surreal imagery and crushing heartfelt depths.

It’s hard to really characterise BENEE’s sound. In fact, it’s so hard you’d give yourself a bloomin’ headache even attempting to try. It’s better just to kick back and luxuriate in her own idiosyncratic bubble. “I describe it to people like my whole plan was to be like a Jackson Pollock painting and have all different sorts of materials splattered onto one canvas,” she says excitedly. “When you start out as a new artist, no one knows anything about you. For me, it was putting my songs onto the canvas and making them all over the place like organised chaos and also having visuals that add to that and just having a bigger picture. I like everything to be eclectic and messy but at the same time, organised.”

Maybe the best way to try to describe the sound of BENEE is to say there is no sound. Fluid and free from boundaries her music is infused with infinite possibilities as she flits from pure pop to industrial drum and bass, whimsical folky ballads and intense electronic beats to pristine indie-pop. She can do it all. “My sound has changed a lot, and I’ve learnt that I can really make anything that I want to,” explains Stella confidently. That’s a good feeling. Sometimes you forget that. This album is where I want to be in terms of experimenting with different genres and playing around with all sorts of themes. I feel confident that this is the place I want to be at the moment. I’ve grown a lot, and now there are people listening to me so that means I can call the shots a bit more.”

Indeed, despite featuring a staggering and impressive list of collaborators including (deep breath) Lily Allen, Gus Dapperton, Mallrat, Flo Milli, Kenny Beats and Baker and, phew, Grimes, the album is very much defined by Stella’s personality and vision. Collaboration has always been at the heart of her work though going right back to the song’s conceptual state. “I want to work with as many creatives as possible. Collaboration is a huge thing for me,” she says. “I’m very stoked with everyone who has collaborated on this album. It’s very surreal to me. All of the people on the album, I got my people to reach out to their people because they came to mind and I was like, fuck yeah I want these guys on the album. I was shocked when they all agreed and wanted to do it. When I have a song, I always know whether or not I want a feature or not. I always have someone in mind who pops up. That’s when I thought about how can I make this happen.”

While all the collaborations on the album thrilled Stella one was really notable. “I love them all equally. Every one of them has smashed it and added so much more to the songs,” she says. “One that surprised me was Grimes. I’m a huge, huge fan. I never even thought of her at first because I thought she was just way too good for me. I was very stoked with that one.”

There isn’t really one distinct theme that ties the songs on ‘Hey u x’ together. It’s an album that highlights a whole wide range of emotions. One of the quirkiest and most compelling songs on the album is a simple tale about a beautifully humble garden creature. “I’m writing about a snail,” begins Stella. “An isolation, lockdown story about a snail and a human. Snails are really quite cute. They’re quite random. People always forget about them. They’re innocent. When you watch them, they’re quite fascinating, and I was doing that a lot during lockdown.”

While some of her lockdown was spent gazing at snails and admiring their quiet beauty the album, Stella created this year also highlights some darker times and bleaker feelings like the isolation of songs, like ‘Winter’ written while she was, “lonely in LA and hating where I was at the time and wishing that I was in New Zealand, with the quiet and not having to go out and talk to anyone.”

The album acts as a window into Stella’s world. “I like how it’s like someone is being sent a message like ‘hey u x’ and someone is opening my brain and getting the whole rundown of my feelings and emotions. The album is very honest, and I want it to feel like the listener is a friend. I think you learn a lot about me listening to it,” she reflects.

One thing that Stella always wants to communicate with all her work is the importance of emotional honesty and being unafraid to show her emotions, whether happy or sad. “It’s extremely important, and it’s something I previously struggled with,” she confesses. “I still don’t really like talking to people about how I’m feeling, which is the case for a lot of people. I have people commenting on photos, saying your life is perfect. It’s good to remind them that I’m very far from that and I’m very much a human who has emotions. With social media, you can look at Instagram and go, fuck, their life is so awesome. It’s important to remind people that there are a lot of low points as well that come with a life that looks so glam.”

That honesty and relatability is one of the reasons why BENEE has grown such a devoted, perceptive audience. There is no mystery or no barrier. She understands what we’re feeling, as she feels the same way.

It’s not just her own career that has been on the rise in 2020. Stella has always been helping to nurture and discover new talent by forming her own record label, Olive. “With a lot of new artists that I find sometimes I just get this crazy feeling about them, and I’m like holy crap this person is so cool! I want to talk to people about them, and I want to help them. That’s why I started the label because I want people to hear these artists that I find. People are listening to me now, which is crazy, so I’m going to use that,” she explains about the impetus for starting the label.

“With Muroki, the first guy I currently have signed, I found this song of his on Spotify and played his song ‘For Better Or Worse’ for maybe three months almost every day. Ridiculous, obsessiveness, this is the best song of my life levels. I get that a bit with different artists, but the thing for me is I want to be so so pumped on an artist. I met him, and he was so cool, and he has this crazy stage presence. I just want to be so into him. I would hope that any label has that feeling about their artists. Looking for artists to sign in the future, I just want to have that same belief that they’re super cool and someone I want to work with.”

So, the future looks to be exciting not just for Stella but for the artists she’s working with and hoping to discover. It’s all part of the creative whirlwind that makes BENEE such an interesting and exciting artist right now. She may have been hamstrung by the global pandemic and unable to play shows just like everyone else in the world, but just like the magical world of her other true passion of animals, nature always finds a way and BENEE has managed to navigate her own unique way to the top of pop’s tree.

The 1975‘s Matty Healy turned up to support Phoebe Bridgers in LA last night, and brought some unreleased songs with him

Måneskin played a last minute, secret London show – and it looked like this