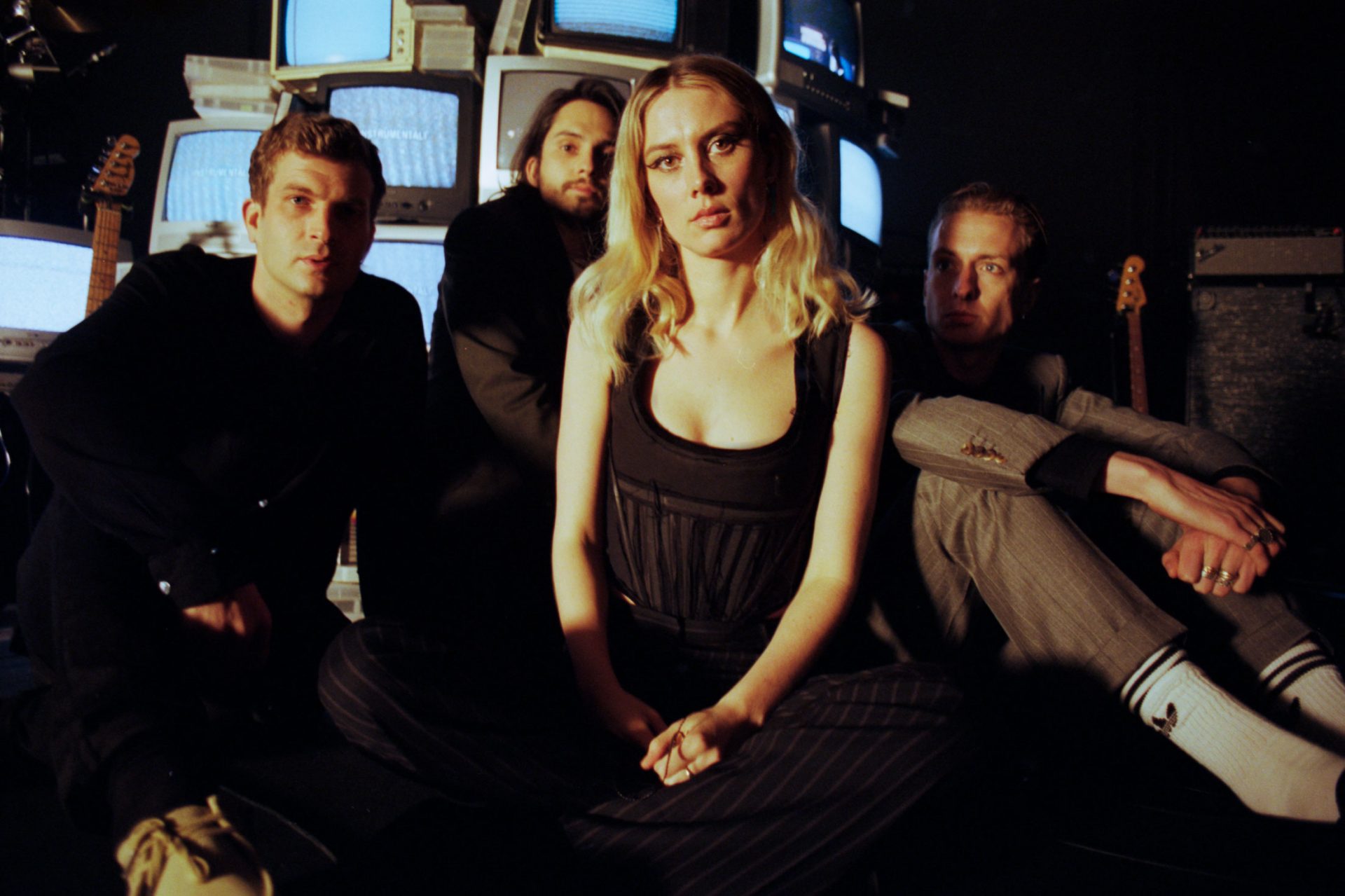 The Best of 2021: Wolf Alice: “We had a feeling it was good, but it was hard to perceive it for what it was”

With every new music drop, it feels as though Wolf Alice couldn’t possibly get any better. Then, they do another album and deliver something that’s once again surprising, innovative, and ridiculously special. Magic.

It’s July 2021, and Wolf Alice are getting ready for an intimate headline show in Bournemouth. In any other year, the fact that Ellie, Theo, Joel and Joff are pulling into another town for another sold-out night wouldn’t exactly be a shocker. Over the past decade, they’ve gone about becoming one of the most essential and beloved British bands. Grandstand ambition, an insatiable creative streak that’s expanded their world of alternative hooks and dreams all while holding on to the core sense that they’re ‘one of us’, has made them bonafide modern greats. Throwing in the fact that their latest album, ‘Blue Weekend’, has been out for nearly seven weeks at this point, and you’ve got the pretty understandable feeling that what Bournemouth will see tonight is another jaw-dropping headline moment.

Things are different, though. Wolf Alice’s first full-on gig in nearly two years, for most gathered, it’s their first non-socially-distanced gig since early 2020, too. Oh, and the next night, Wolf Alice will be headlining the biggest festival of their career, Latitude. In a year that has felt more like tunnel vision, that moment before stepping on-stage in Bournemouth is one that Ellie Rowsell recalls vividly. “I think looking back, it was that moment in the year that I really felt the most,” she explains. “When we were just about to go on-stage in Bournemouth, and suddenly I could hear people chanting. We were in such a nice venue, and I felt very close to the five of us and our crew. It felt like everything had fallen back into place a little bit, and it was really nice. We’ve had some really brilliant experiences this year, but that moment… I treasure that one more so, for some reason.”

Fast forward to now, and it’s fair to say Wolf Alice have seized the year as their own. It’s no surprise; they’re a special band – and that’s not a statement you’ve never seen before or one you’ll find many (if any) detractors arguing against. Yet even for a band who have well and truly set themselves apart, 2021 was something different. What began confined in rooms and houses blossomed into their grandest era to date, with a record that takes everything you hoped Wolf Alice would do next and goes even further. As Ellie and Theo look back, just days away from heading to the US for what will be their biggest headline run of shows for quite a while, it’s been a surreal 12 months. “It’s weird to think at the moment,” cracks Theo. “It’s just like tunnel vision, isn’t it? At the moment, we’re just like – right, let’s fucking do this American tour and make sure it all goes fine and well. It’s kind of nice because it makes you live in the moment, but also the moment is full of anxiety because of all the ways things could go wrong.”

“When you’re not playing shows, it’s quite hard to gauge how things have gone down”

While the world may still have potholes to dodge and avoid, ‘Blue Weekend’ took on a life of its own. Sitting with few contemporaries, it’s an album that transcends, both capturing a moment in time and timeless all at once. Pushing that cinematic flair to the very top, it’s a lush album that’s taken on a rightful life of its own. With the adoration and plaudits for previous album ‘Visions Of A Life’ and the incredible response since, you’d think that Wolf Alice were pretty confident before its release, right?

“We were really nervous before ‘Blue Weekend’ comes out,” admits Ellie. Being away from the usual sights and sounds of being in a band for so long found Wolf Alice wondering how their next chapter would be received. “We had spent so much time making this album in such intense circumstances that we couldn’t see the wood from the trees. Deep down, I think we had a feeling it was good because I don’t think we’d put out something that we thought was shit, but we were so immersed in everything ‘Blue Weekend’ that it was kinda hard to perceive it for what it was.

“Being blessed with nice reviews, that was a relief. We were flattered by those, but y’know, when you’re not playing shows, it’s quite hard to gauge how things have gone down unless you want to take the time trawling through Twitter and whatever.” Ellie takes a moment as memories of finally stepping back on-stage flood back in. “We really weren’t expecting people to sing back the words and stuff like that, you know? But that’s why doing these shows have been so good.”

No concerns were needed. ‘Blue Weekend’ proved itself not only in fulfilling every ounce of anticipation that came from being quite the big deal following two gold-standard albums but also in expanding everything that makes Wolf Alice so sensational. From the moment ‘The Last Man On Earth’ arrived, it was clear that this was a Wolf Alice searing for the big leagues.

Boasting an album that jumped from feverish intensity and hooks (‘Smile’, ‘Play The Greatest Hits’) to jaw-dropping beauty (‘How Can Make It Okay?’, ‘Lipstick On The Glass’ and ‘Delicious Things’ to name but a few), it delivered on every level. It makes Wolf Alice impossible to ignore, a band that a generation of alternative music fans will forever point to as The Best. After every stone laid down across ‘My Love Is Cool’ and ‘Visions Of A Life’, ‘Blue Weekend’ managed to feel like an album essential for now. Truth be told, it’s a type of magic.

Stepping on-stage once again has given the band the chance to really gauge the impact of ‘Blue Weekend’. “It’s where we usually gauge things,” details Theo. “Looking out into the audience and literally seeing people’s reactions. We don’t compare it to what we’ve done before because so many factors are at play. You change, people change, but it’s ultimately us at the core of it. When you can look out and see people singing like ‘Delicious Things’, they’re really significant moments. These songs aren’t singles, so maybe it suggests that the album overall is hitting people at home. It’s hard to compare to what’s happened before; it almost feels completely new each time.”

Finally giving Wolf Alice a deserved Number 1 album, it’s yet another achievement to add to their incomparable resume. And the small matter of headlining a major festival? Yeah, why not – let’s add that in there too. “Yeah, in hindsight, for that to be our first show…” begins Ellie, as Theo beams at the sheer chaos of returning with a defining show atop the Latitude bill, with just the one small warm-up date to follow nearly two years away from the stage. “I can’t actually believe that was our first major show back. I must have been on autopilot or something because, looking back now, I’d be so nervous to do that. Nothing really made sense at the time, if you know what I mean? I was just as scared to do a Zoom interview as I was to headline Latitude. Everything was up in the air and just fucking weird or whatever. Just crazy.”

“It was also basically our first show playing with a new band member live,” adds Theo, referring to former Superfood favourite Ryan Malcolm joining the fold on-stage with the band. “Adding something that significant to the show as well, something that it feels like you need so much practice in front of audiences to get right. For Ryan… what a fucking horrible first day at work. It’s amazing because you’re headlining, but it’s like playing in the Champions League Final for your debut instead of going on trial at Charlton Athletic!”

There’s something ever so Wolf Alice about it all, what’s taken them to this level. With three albums to pull from, it felt like a coronation that we’d all been waiting for. “Yeah,” picks up Ellie, “because I feel like the small grassroots venue tour we just did… obviously you give your 100% at every show no matter how big or small it is, but it’s quite nice to play things for the first time and trial things and stuff in front of a smaller audience, isn’t it? And I now feel more confident to play those bigger shows, but it’s like – fuck, we’ve already played the biggest show again, right? I was like, oh my god, we didn’t have a road test or anything before we went and headlined a festival. I was there like, ‘Oh, what about this?’ It was quite mad when you think about it.”

That headline moment became a true highlight of the summer, a culmination of every step in the Wolf Alice story and a welcome celebration. During a time deprived of unforgettable nights under the stars with your favourite bands, something special happened. Call it a light at the end of a very long tunnel, but it felt like there was no better band to capture this year. “I will treasure that memory forever,” admits Theo. “That weekend was just fantastic, being able to headline a festival with a light show… I think we were really proud of that show.”

With that scorching run of intimate shows across the UK now in the books, as well as another crowning moment high-up at this year’s Reading & Leeds, attention for Wolf Alice now turns for what comes next. In what’s been a year of incredible moments, juggled with a slightly disjointed return to normality and playing shows, it’s clear what sits at the forefront of their minds. “With the world allowing, I think the ambition now is to get out and just play. Play quite a lot,” states Theo, that hunger to travel the world and get in front of fans wherever possible more prominent than ever before. “It’s weird having an album come out and not being able to properly give it a go at playing to loads of people around the world and trying to show people what it is in that environment is strange.” A sold-out January UK headline tour already promises to be a truly special set of evenings where ‘Blue Weekend’ can come to life. “That, plus hopefully we’ll try and make some new music or do something else because it will be quite a while since we’ve been doing stuff like that. It’s weird to think, we’re back there already.”

Turning a year of uncertainty into their finest to date, Wolf Alice are leaders of the pack.