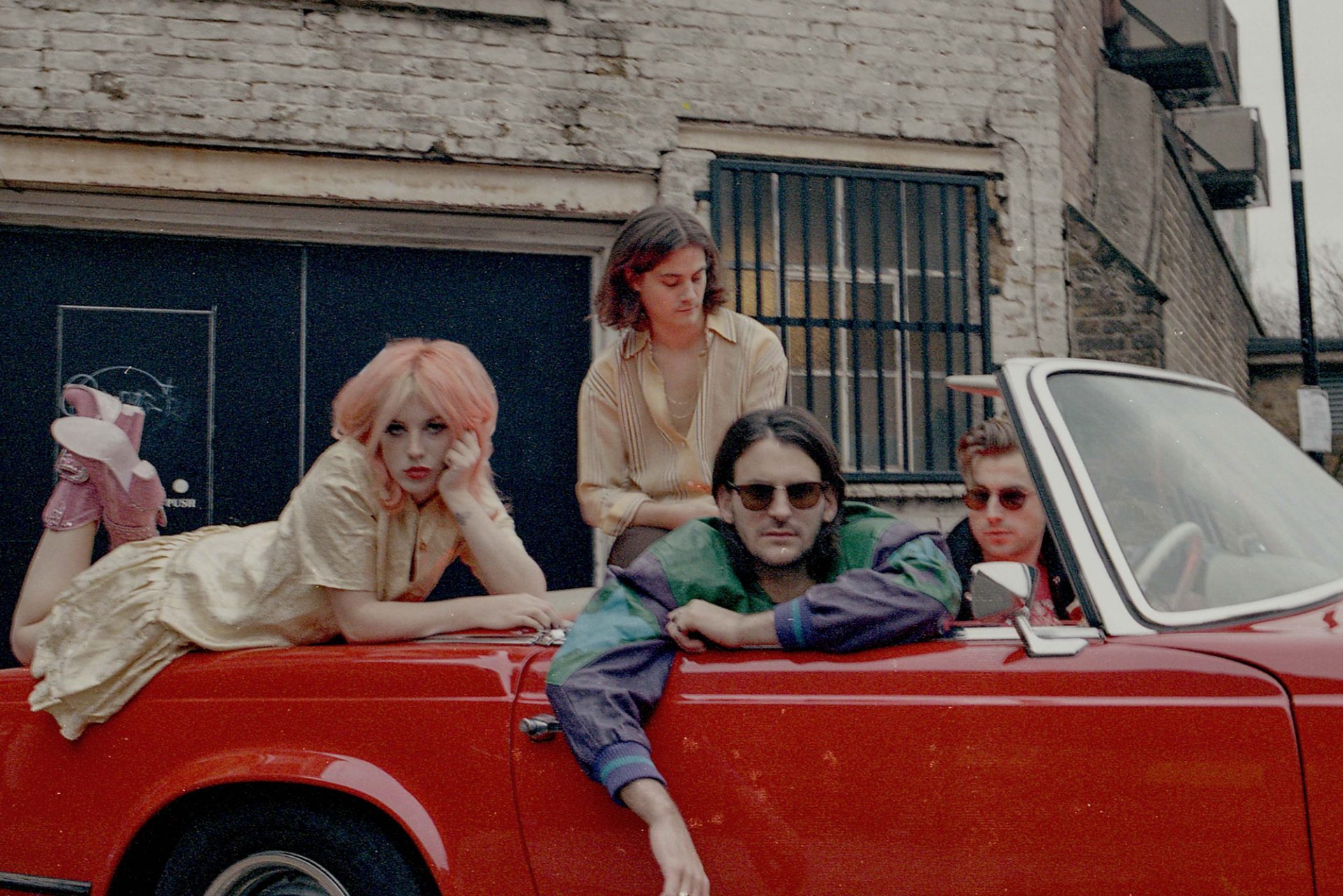 Black Honey: “I just wanted to fuck it up and blow the lid on some shit”

Back with a second album, ‘Written & DIrected’, Black Honey have lost none of their theatrical side.

Black Honey have always been ones for the limelight. As a band that thrive on kitschy and theatrical aesthetics, their second album ‘Written & Directed’ takes things up a notch not only by taking centre stage again, but orchestrating the whole affair for a cinematic mission statement steeped in pop culture.

“I feel like I’ve learned a lot about trusting my own abilities and knowing about my guts. I’ve always been quite a guttural person.” The band’s frontwoman Izzy B. Phillips reflects on how she has changed since Black Honey’s 2018 self-titled debut. “Through the process of making these last two records, I’ve really learned a lot. With album one there were a lot of different elements that affected the way that album came out. We were in the middle of a tour… the pressure that we were under, all of those things add up. Whereas this record [was] fucking amazing. There was no part of it that was hard.”

Inspired by grindhouse cinema and pulp films, alongside a title referencing Quentin Tarantino, ‘Written & Directed’ is more soundtrack than album. “When we were making the record, we didn’t have the title alone, just thinking a lot about the arching perspectives that we wanted to deliver. With every song that we made, we were like, does this fit into a movie? If the answer was yes, what scene does it fit into?” Izzy explains.

“We started talking a lot about the different ways in which cinema depicts different storytelling. We listen to music to feel like we’re in a movie, I think. I’ve got this lyric in ‘Corrine’ [from Black Honey’s debut album] where I’m like, we’re only playing make-believe. We live in a movie, everyone’s living out there in their own movies. So I really wanted to dig into that idea and explore artistically what would a Black Honey movie feel like in a record?

“In the past, people have critiqued me for having a really changeable or flitty artistic style. The fun part of this record was seeing all of those things or the contradictions of my nature come through, but in ways that felt like they sat together and in a cinematic narrative. Women aren’t allowed to have an angry feeling, and then suddenly they’re sad and sometimes vulnerable.”

“I love what we’ve made because I think I felt like it was something that couldn’t be done,” she continues. “Or that it was very uncool to do. We’ve managed to create a world that is so uniquely us, that it almost feels like only we would have done it. I can’t imagine very many bands wanting to do the sort of record we make, and that’s something about myself that I used to critique. Because we’re so campy and we do all these theatrics. A lot of people find that super gross, and I can see why people would. To me, that is my self-exploration of my imaginary world. Not one word on this record is untrue. I lay myself as bare as I can.

“I’ve learned a lot about trusting my own abilities”

“There’s this amazing quote about Jack White that says The White Stripes are simultaneously the most fake band in the world and the most real band in the world. That really resonates with me, and I identify with the idea of creating something that’s almost so fake that the realness of it becomes more real.”

Black Honey’s new record also explores themes of womanhood, flip-reversing female cinematic representation all primed to unfurl and explode around them. But feminism is an issue that Izzy didn’t always resonate with until recently.

“I felt for ages that feminism was this issue that everyone put on me that I had to talk about,” Izzy confesses. “It felt really annoying. I just wanted to be treated like how the boys get treated, and it’s so fascinating, because now the more I’ve learned about it, the more I’m like, I’ve got to do something. I like to let everyone do their own thing, but it’s like, shit this is actually my conversation to be had and just because a lot of things came very authentically to me, like doing masculine jobs is so natural, I’ve always been very in touch with my masculine side.

“But this my conversation to be had, my world that I know best, my window to give other girls and women an opportunity to see themselves in a different light. Just because I didn’t need a woman to become Izzy from Black Honey, doesn’t mean that other kids don’t need that. Or people who are marginalised don’t need to see more diversity.

“I think that’s something that I’ve also loved about this year [2020] is discovering this plethora of diverse creatives and musicians that I can really identify with, and feeling super empowered by all these troops of marginalised people coming through the cracks now. It’s like fuck yeah, this is the invincible time in history. I feel very proud of that somehow. I don’t feel like I created it, but I definitely feel like I’m sort of like cheering the progress on.

“It’s people like Arlo Parks and Billie Eilish. You get pop stars like Dua Lipa who are the archetype of star, then you get Billie Eilish kicking the doors in, and it’s like whoa, that shit is wild. Suddenly this depressed teenager is voicing a generation. I’m absolutely here for it.”

The new sense of empowerment Izzy feels feeds into the compositions on ‘Written & Directed’ that see experimentation with sounds previously uncharted. For instance, the distorted grunge shockwave of ‘Disinfect’ is the heaviest song the band have done to date.

“It’s so weird, because ‘Disinfect’ is my premonition song. I feel like this shit has been fucking coming and bubbling up and for me, when I say lyrics like, we’re just the virus addicted to the violence, I think I was tapping into something. I’m absorbing something from around me. I’m not a fucking crystal ball or anything, but you do have an insight.

“Sometimes I think songs are premonitions, even if they’re just messages to your future self. As a creative, you’re tapped into that shit all the time. You can’t switch it off. It’s a curse. That song felt like I just wanted to fuck it up and blow the lid on some shit, like the film Over The Edge.”

Speaking more about the film that inspired the track, Izzy says, “There was like an overpopulation of kids in this town in America in the seventies, and the kids just overwhelm the school and start burning the school down. It’s unbelievable. That was my theme for ‘Disinfect’, this sort of generational fury and really dark anger that I feel like I’ve carried since I was a kid.”

“I’m completely obsessed with the era of Lou Reed and Andy Warhol, Edie Sedgwick. I love that whole black and white New York seventies shit. I guess the way that you can hear that coming through is in songs like ‘Summer 92’; this beautiful 8mm movie of kids skating in the sunset and graffitiing their schools. I can see these super romantic and beautiful stories from an alternative perspective from someone that is an outsider.

“I think I’ll be working on tracking movies eventually. I would love to do something like that, and I hope I get an opportunity one day. I absolutely love cinema.”

“I think I’m most proud of the fact that I can listen [to the album] and I’m still obsessed with it. I’ve sat with it myself for a while, I didn’t listen to it for like six months, and then in August, I got really drunk and drank like, like five margaritas or something. I was at a train station, and I just thought, fuck it, I want to listen to the record. I just sat off my face on this bench, and I listened to the album back-to-back twice in a row. I just fucking cried like a child. It was just like, fuck I made this, and who the hell is writing these lyrics? What a message to send to myself.

“The song ‘I Do It To Myself’ – that is someone that really doesn’t want to get help, but really needs it. Hearing that now, and seeing that from an outside perspective is like looking in the mirror for the first time and being like, what the fuck? Who’s this person? I’ve never met you before. It’s the time of reflection that you have now as well, isn’t it? Like do you go on tour for five years, but you don’t stop, so you never think or look back or reflect.

“I’ve loved everything I’ve done, every fucking second. I swear to God, I’ve smashed my twenties. But I do think that there was absolutely not one point where I was like, maybe I should just sit and do nothing for a while? Now I’m doing that I’m like, I don’t even know who I am. I’m like, who is this person? I’m fucking proud of this person, that’s for sure. But I also see a vulnerable person as well. A complicated person that needs a lot of help, and support. It’s a really weird out of body experience.”