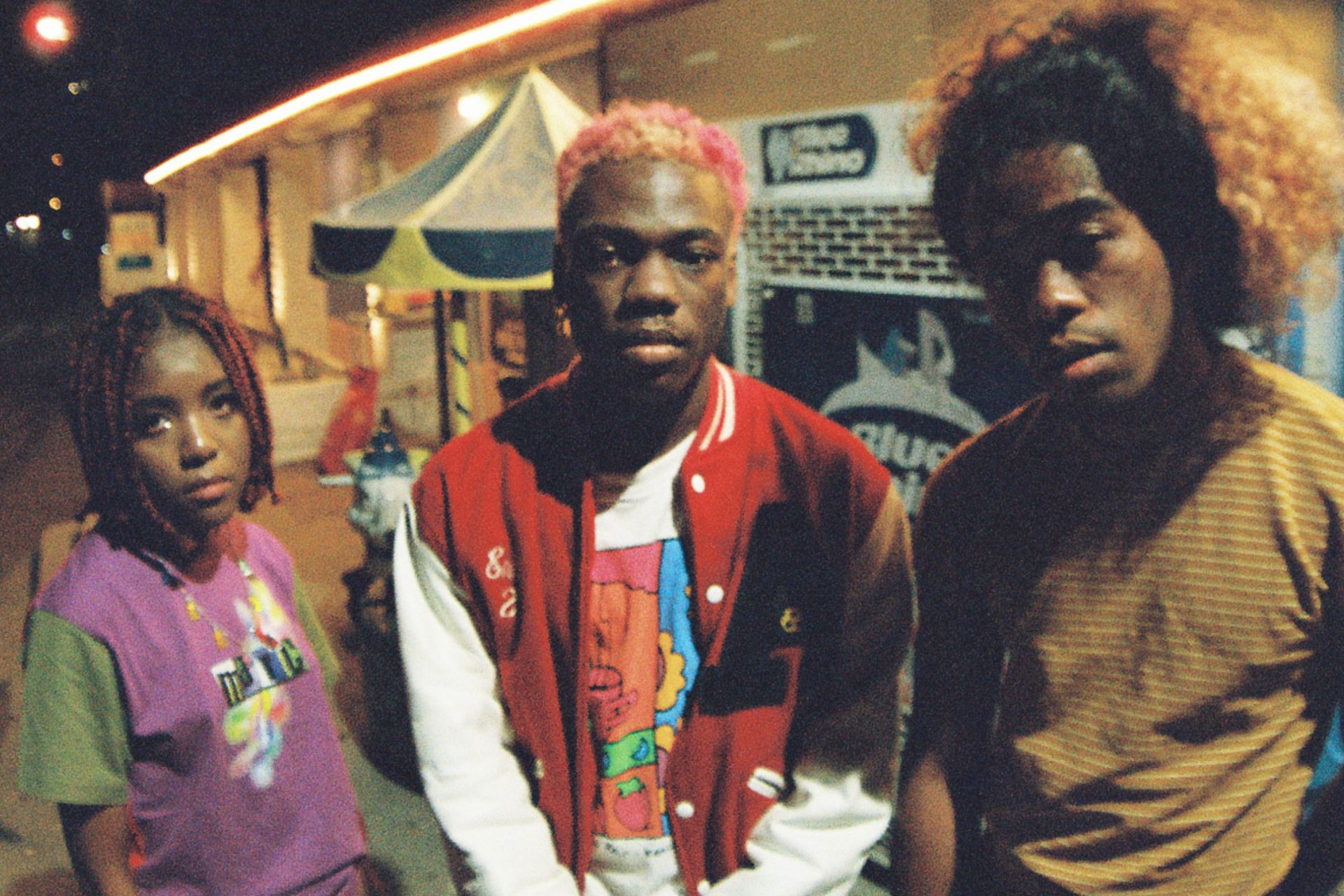 BLACKSTARKIDS: “It feels crazy because we’re just normal people, but people see us as idols”

Having spent the past few years accruing fans like no one’s business, Dirty Hit signees BLACKSTARKIDS are making their opening statement proper.

BLACKSTARKIDS are more than just a band. BLACKSTARKIDS are a family, an unshakeable bond between friends who are living their dream. Ty, Deiondre and The Babe Gabe represent a new generation of musicians who have a different set of inspirations, passions and obsessions, both old and new and are forging a path of how to make music in 2021 and have the time of your life while doing it.

There’s no great philosophy at work here, there’s no grand plan; that’s not their style. BLACKSTARKIDS’ whole thing is built on the simplest and purest of premises. “I would say we’ve just been hanging out,” says Ty when asked to describe the journey they’ve been on since they announced themselves to the world with their first project, ‘Let’s Play Sports’ in 2019. The three friends always had a close relationship but as the band has developed, so has their friendship and bond. “We all met in high school,” explains Deiondre. “Ty had already been making music with me and Gabe separately at the time, but he just decided to bring us together and start making our first album in my bedroom. To this day, we’re making music in my bedroom. It’s our space now as we live together, so that’s dope as fuck.” “Yeah, I see them every day,” laughs Ty. “Even before this, I saw them every other day, but now I spend all my time with them.”

From Deiondre’s bedroom to global indie success, the band are adapting to their newfound fame. “It feels crazy because we’re just normal people, but people see us as idols,” says Gabe.

It’s easy to see why people are so inspired by the band. If you’re looking for a representation of music and culture and what it feels like to be young today and the whirlwind of emotions that goes with it, then you can’t go far wrong with their new album ‘Puppies Forever’, which encapsulates every aspect of the multi-genre rush of the BLACKSTARKIDS experience. “The vision of the band is just total expression,” says Ty confidently. “It’s us being ourselves and leaving a mark. I feel like with this album, we’re definitely expressing ourselves, and it’s a reflection of the moment we were in. It’s important to stay true to yourself.”

The album is the culmination of a three-year rise for the trio. “I feel like we have a better understanding of who we are on each project,” continues Ty. “When we were doing ‘Let’s Play Sports’, I think we knew it was a cool idea. We have a really similar taste and everything. We like a lot of the same clothes, a lot of the same music, a lot of the same movies. We like a lot of the same stuff, so it made sense for us to be together. That connection was always there on ‘Let’s Play Sports’; you can see that when we did ‘Surf’, we got more comfortable with each other and the sound. On ‘Whatever, Man’, we were consistently able to put together a vision of an idea we had and create a world. ‘Puppies, Forever’ is just like knowing who we are, feeling comfortable in it and just creating.”

The breadth of sounds and styles on the record is striking. From straight-up power pop to dreamy synth excursions to frenetic punk to progressive hip-hop, the trio are unafraid to throw everything into the mix. “We always approach songwriting in the same way of expression and chasing ideas that we have,” says Ty. “Making the album was the pursuit of an idea, so each song is just further and further into the pursuit. It will always be that way.”

‘Puppies Forever’ finds the band exploring topics that resonate deeply with them, from very personal to songs that tackle societal issues like the furious album centrepiece ‘All Cops Are Bastards’. “That song is addressing a situation that we saw first hand and the whole country went through,” explains Ty. “We had first-hand experience of dealing with the aftermath of the murder of George Floyd. That’s our reaction to that. Every song is tackling real-life situations and emotions that we’re going through.”

In the post-pandemic world, we’ve seen an explosion of creativity from young artists all over the world who recognise that things have changed and the old ideals are crumbling down. We’re in the middle of a new golden age of technology-aided expression. “It’s always an exciting time to make music because there’s always people making fresh shit,” says Ty excitedly. “It keeps you on your toes and makes you want to get better at what you’re doing.”

There’s a universal quality to BLACKSTARKIDS’ music that is supremely engaging. Their music resonates for many reasons, but one of the primary ones is the memories that they evoke. It’s a form of intoxicating nostalgia that isn’t in thrall to the past but rather inspired by childhood memories shaped into new current experiences. “That time in the 2000s when we were growing up, that was the first shit where we were like ah, this shit’s cool. That’s why it spills out into the music,” says Ty about the period that their music most blissfully evokes. “A lot of the people who listen to us are maybe a couple of years younger or older, and they have a lot of the same interests and memories,” he continues. “Even for people who are older, it might not necessarily be a direct influence or something, but it takes it back to their version. When we talk about teen movies, we might be talking about Scott Pilgrim while someone older will be thinking about The Breakfast Club.” The trio proceed to chatter joyously and rattle off a number of their most cherished 2000s pop culture moments, including Diary Of A Wimpy Kid movies, “Mean Girls!,” shouts Gabe, Napoleon Dynamite and Project X.

At the heart of the band is the relationship and dynamic between the three friends. Nurturing and cherishing relationships is a key theme throughout their music, from their earlier calling card single ‘Friendship’ to the new album’s ‘Pals’. “At a time like this for us at this time in our lives, we see each other every day more than we see our own families, so it’s like we’ve become a family to each other,” says Ty. “These are the people you have fun with but are also the people who can look out for you if you need help in any way. The type of friendship we have is purely love. It’s real love.”

When asked what the best thing about being in BLACKSTARKIDS is, the three of them are all united in their answer. “It’s fun. It’s the people in it. These people are my brothers,” says Gabe. Oh, and the sangria nights, maybe that’s the second-best thing. “We love the sangria nights!” laughs Gabe. “With this album, we started drinking together a lot more,” adds Deiondre laughing. “Ty and Gabe would come on over to my house, and I would probably already be drunk or high. Every night.” “That was our Project X,” shouts Gabe excitedly.

Perhaps the truly best thing about the band, though, is the joy they bring. There’s something distinctive about a BLACKSTARKIDS song. “It’s got to be bright,” exclaims Deiondre. “Yeah, sometimes people will be like, when will you guys do darker, sadder music? But I don’t really fuck with that. I like bright songs,” adds Ty.

There’s definitely a lot for BLACKSTARKIDS to be excited about as they gear up to travel the world, playing shows again. Backed by Dirty Hit in the UK and repped by Matty and Beabaddobee (who they’re about to go on tour with), the trio are going places fast. Time flies when you’re having fun as one of the album’s standout track titles says. “That makes sense for us as friends and the group message,” says Deoindre happily.

Taken from the November 2021 edition of Dork, out now. BLACKSTARKIDS’ album ‘Puppies Forever’ is out now.