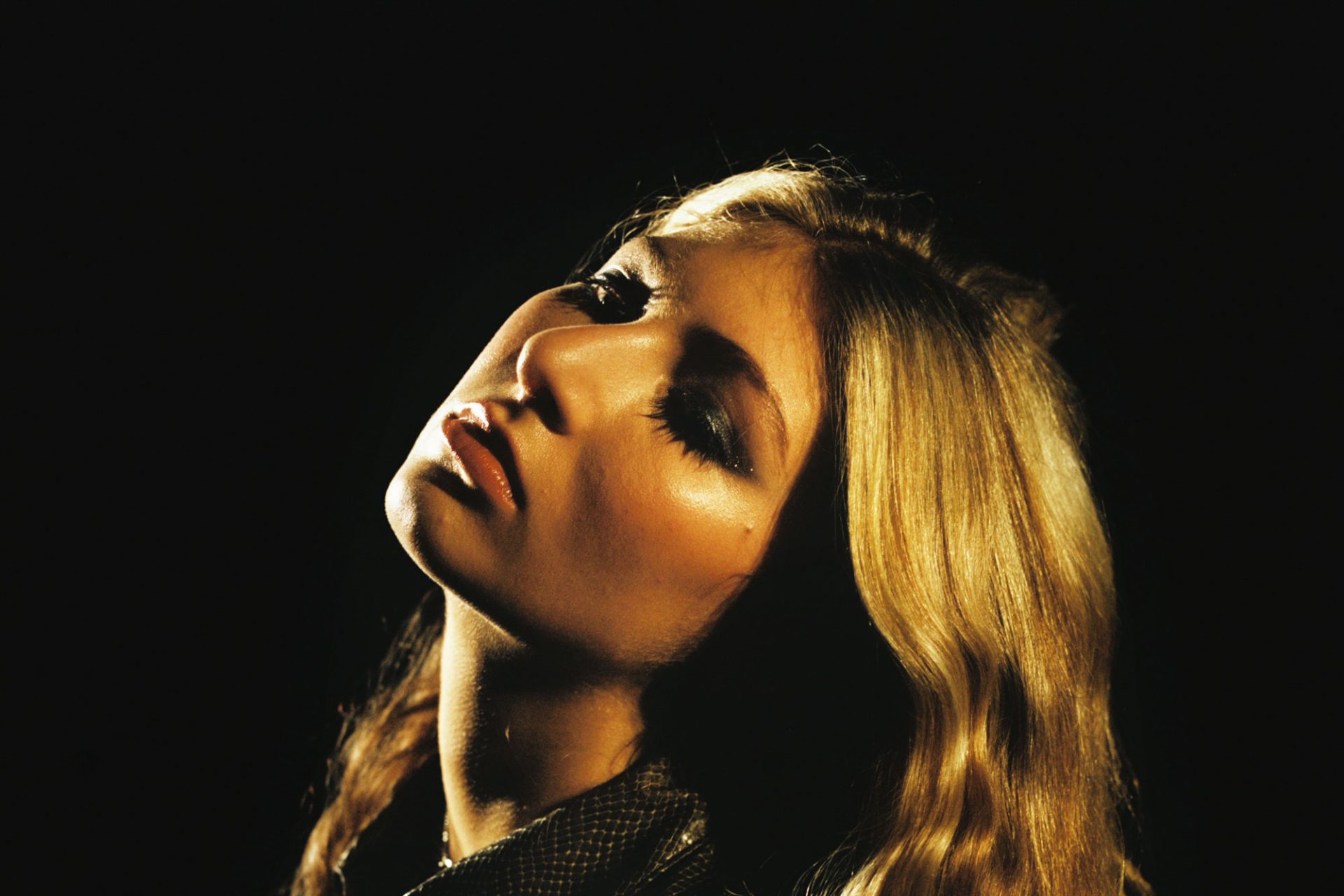 You’ll have heard Blu DeTiger, even if you don’t know it, but there’s much more to her than being the soundtrack to a never ending stream of TikTok videos.

Blu DeTiger is living a life as wild as her name suggests. She’s blowing up on TikTok with her epic bass videos that see her freestyle over pop classics from ‘Baby One More Time’ to ‘Get Lucky’, which are weaved between original compositions and snippets of idealistic New York City landscapes. Her cover of Ginuwine’s ‘Pony’ is also a must-see. Though amassing a following in the millions across the digital sphere, labelling her simply as a TikTok star would be reductive, as she’s been flourishing long before the app ever came into existence, and is now gearing up to release her debut EP.

The EP was crafted in lockdown, which Blu has been spending in her hometown of NYC, where she still resides. “The city is super inspiring. It’s based on hustle and bustle, and everyone’s working all the time, and everything’s moving. You can do a million things in a day, every single day. I think it’s where my drive comes from, being a New Yorker.”

The New York state of mind is instilled into Blu’s existence. Ever since she was a child, she would seize every opportunity she was given, with palpable enthusiasm that she still has to this day, bolstered by a creative upbringing.

“They’re not musical; it’s really funny,” she says of her parents. “But they’re both super artsy and creative. My dad is a painter and a sculptor; he does a lot of different forms of visual art. They were very much adamant about following your passion and living your dream and doing what you want to do. I think that was always instilled in my two brothers and me at an early age, which I’m super grateful for. My older brother started playing drums when he was ten, and I was seven at the time. [It was the] classic sibling thing. I wanted to play an instrument, and I chose bass because I thought it was unique and different. I just fell in love with it. I took lessons and did different music programmes and just practised. There was never a point where I wanted to quit.”

Despite not being legally old enough, Blu’s career in music started to gain traction when she started DJing in clubs around NYC at just seventeen.

“I was playing with a bunch of bands, and this friend of a friend introduced me to this guy who ended up being like my mentor; he ended up teaching me how to DJ. I was just super intrigued by it. We had some turntables at our house and some records, but I was just super interested in the technical side of it. I practised my ass off again; I was super passionate about it.

“I got one gig at The Guest House, which was this really cool club in New York that doesn’t exist anymore. I got one gig there, through my brother [who] was friends with Tyler Mitchell who’s a really successful photographer, he just shot Beyonce for Vogue. He had a book launch at The Guest House, and my brother said I’m a good DJ. So I DJ, and the party’s my first gig. I was super nervous, I’m showing my fake ID to get in and the bouncer’s like, ‘Yo, this is fake!’ Obviously it’s fake because I’m seventeen! It was so bad. I was still in high school, and I had to leave basketball practise early. I’m like, please just let me in; I’m just DJing, I’m not gonna drink, put X’s on my hands. He was like, fine, you can go, but I’m taking your ID. Then I played with huge X’s on my hands… and when I left the bouncer ended up giving me the ID back.”

“I love TikTok. I’m obsessed with it. My screentime is ridiculous. It’s so embarrassing”

“With DJing, the only way you get good is playing in front of a crowd, because it’s so based on that energy of the audience and reading the room. When I finally did that and felt the energy of the room and felt the power of making people dance, it was super empowering to me. It was the best feeling, such a high feeling. I brought my bass, and I was shredding, and people loved it. I kept getting gigs from that. Someone would be at the first one, who booked me for the next one, and then just slowly, you get into it by just working hard at it.”

While making a name for herself as a staple in the New York club scene, whether this be DJing techno in warehouses or securing her own residency, her career reached unimaginable heights when she joined TikTok.

“I love TikTok. I’m obsessed with it. My screentime is ridiculous. It’s so embarrassing,” she laughs.

“There are so many creative people on there. These kids who are just so interesting, and have such good ideas. There are some really good musicians on there too. I think it’s motivating and inspiring. I’ve gotten better at my instrument from making these videos too. I think when I started doing all the TikTok videos, that helped me think differently about the bass, and how it can be more of a melodic instrument. A lot of the time I’ll bring it to the forefront of the song, and I’m putting my own spin on these classic pop songs. That’s been helpful when I even write my own stuff.”

TikTok is one of the fastest-growing apps in the world, but there’s still a hefty amount of stigma surrounding the outlet and whether it should be viewed as a credible platform. It’s a trial Blu has had to tackle as a musician.

“I’m always thinking about this because, for me, there is that stigma,” Blu admits. “I’m so happy that I have a platform there and that I’ve been able to make fans, but I think what people don’t realise a lot of the time is that I’ve been doing music forever. I was DJing since I was seventeen, and playing bass since I was seven. I think it just connected on TikTok. I just found a niche that was able to accelerate.”

The glass-half-full attitude Blu has is mirrored through her colourful and striking style and aesthetic, informing her effortlessly cool music videos and sonic soundscape that’s a divine mix of nostalgic funk grooves and synths seized straight from a futuristic club dancefloor.

“I’m a positive and colourful person. My name is a colour!” she exclaims. “I’ve just always been into that bright feeling. My music is colourful; it’s not dark energy. I think it also comes from my dad, a lot of his paintings use colours, and they’re sort of abstract. Like the colourful neon panels [in her house that are now a staple feature in her TikTok videos] are one of his art pieces that I just put in my studio. It’s me growing up in a creative household with colourful things around. Visually for this EP a lot of the feeling is dreaminess and fantasy, reminiscing… All of the colourful elements really pair with that.”

Speaking more about her sonic influences, Blu cites a string of 70s funk greats alongside 80s new wave legends. “Chic and Nile Rodgers… I wanted to learn every bassline. When I was getting into slap bass, I learned a lot of Larry Graham, Sly and The Family Stone. I was obsessed with Blondie. I’m still obsessed with Blondie. Tom Tom Club, The Talking Heads… All of this late 70s, early 80s funk disco. Zapp and Cameo. Acts that are so ingrained in my head. Grooviness, funk and disco elements are always going to be present in my music.”

New single ‘Vintage’ taken from her debut EP retains her signature grooviness, but also an essence of 00s electro, revealing a surprising penchant for British indie.

As an extrovert that thrives with social interaction, 2020 was a wild ride for Blu. When news first broke of lockdown, she had just wrapped up shows in the UK supporting Caroline Polachek, and now her longing for pre-pandemic times has weaved its way into the fabric of her debut EP for a double dose of nostalgia next to her affinity for retro sounds.

“It’s my first full project, which is really exciting. A lot [of the EP] has to do with the emotions that I was feeling during this quarantine period. A lot of the songs are fantasising or talking about recent memories, like looking at the past or longing for a pre-COVID time, and a post-COVID time. A lot of reflecting and nostalgic feeling, for the dancefloor, since we can’t be in clubs. The production elements are very much remembering that feeling of dancing and being with other people in a room. The bass is definitely the emotional undercurrent of all the songs. It definitely drives all the songs, and it’s kind of like the main element, which is really important to me. It’s just groovy and dreamy at the same time.

“I also produced a lot of a lot of songs on the EP. I’ve always done it, but only now in the most recent few months have started to call myself a producer. During quarantine, I really got into it and just honed my skills and was experimenting and wasn’t afraid to make bad things until I could make a good thing. I think people can expect me producing a lot more after the EP.”