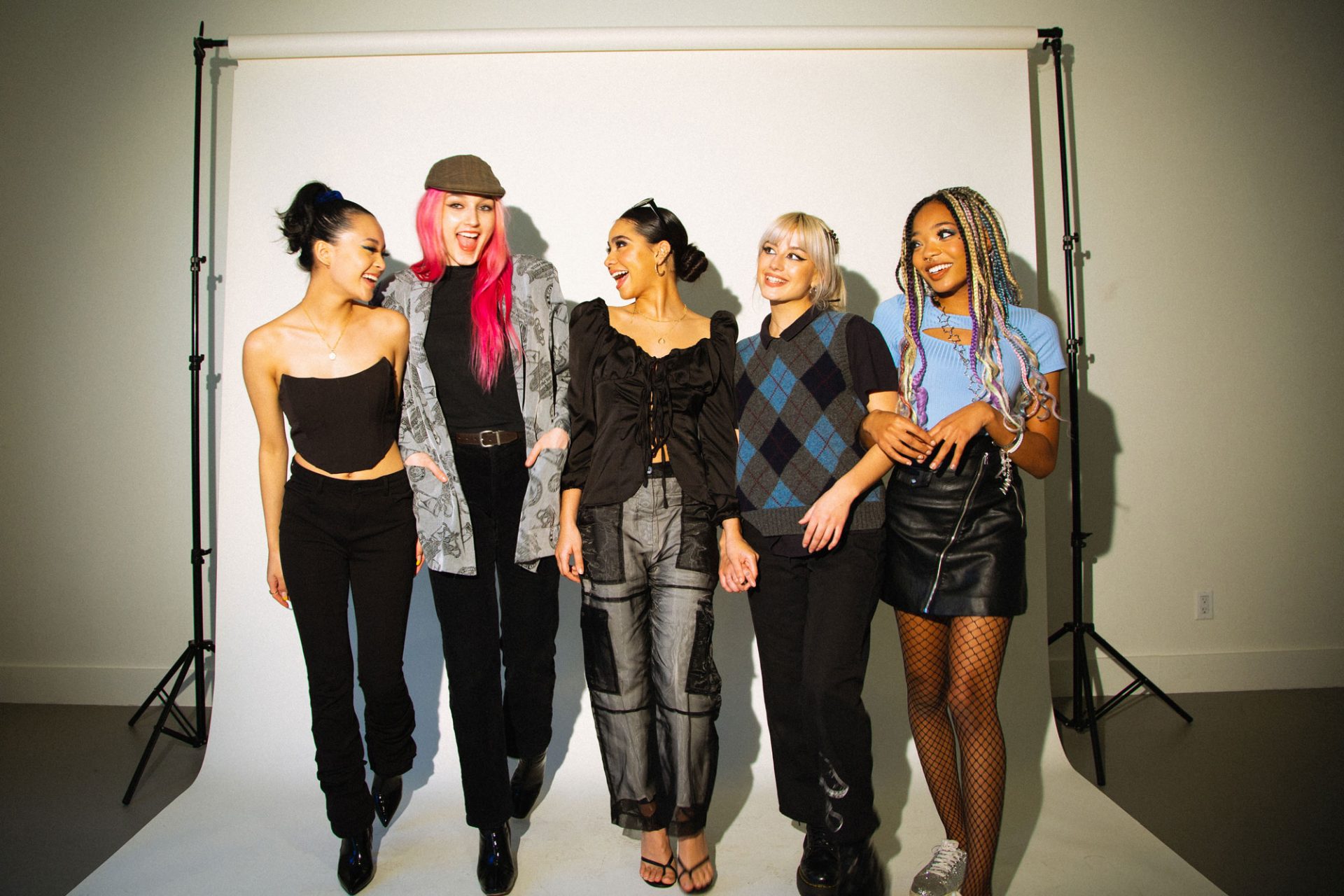 Boys World: “We’re like little sponges, babies in the industry”

It takes a lot to break Dork. We’re rarely out-nonsensed, but on a regular Monday evening, new It girl group Boys World give it a good go. “We just had the most chaotic interview of all time,” youngest member Makhyli tweets shortly after our chat ends, which is quite the honour to bestow upon us.

Maybe the most Gen Z group yet, the five girls – Elana Caceres, Olivia Ruby, Queenie Mae, Lillian Kay and Makhyli – were scouted online and recruited via Instagram DM before being whisked off to Los Angeles to live together. From there, they climbed the ranks of the for you page in 2020, amassing 30.5 MILLION TikTok likes and eventually making their debut as a girl group in October.

Obviously, when we sit down on Zoom, the five-piece have just finished up filming TikToks, and are sitting together at the coffee table of their shared house in LA, where they’ve been living for two years, building relationships with one another and releasing content online while secretly working on music.

“The first year was just all development, and the second year was kind of getting into the music and growing the fan base on TikTok and stuff like that,” says Queenie.

For all their Gen Z-ness, it’s their 90s flavour that’s put them in the spotlight. Drawing comparisons to groups like the Spice Girls and TLC, who hit their peak before Boys World were even born, they merge 90s and early 00s quirkiness with modern pop beats and very 2021 lyricism. Debut single ‘Girlfriends’ mirrors ‘Wannabe’ with a new twist (“You know girls stan girlfriends over boyfriends,” goes the chorus), while ‘Wingman’ embraces independence and latest ‘Tip Toe’ describes a cheating other half who gets caught out.

Speaking about their personal favourite groups, Elena says: “I do listen to more back in the day Destiny’s Child kinda stuff, but I think Little Mix are really great, because you can just genuinely tell they’re friends. I think that’s inspiring, but also when they get up on a stage, they can really work.”

As for the others, Olivia is long time boyband stan (One Direction 4eva), while Queenie was inspired by girl power cartoons like Powerpuff Girls, Winx Club and Totally Spies, Lillian loved Disney groups like the Cheetah Girls and theatre kid Makhyli plumped for fictional group the Schuyler Sisters from musical Hamilton.

It’s clear that, even during our interview, the girls are still learning new things about one another every day. When we start chatting about their backgrounds, they’re well familiar with Queenie’s mother’s musical influence on her, and Lillian’s father’s past in a band and attempts to get his daughter on board (“He tried to sign me up for the Battle of the Bands, but I was incredibly shy so I just sat in the corner,” she says), but it’s news to the group that Makhyli was also in a band growing up.

“I was in a band as well, but it didn’t work out because they didn’t like me, and I didn’t like them. I mean, it’s about chemistry at the end of the day,” says Makhyli, and in their disbelief, the girls veer off into a conversation of their own.

“You learn something new- Oh I forgot we were doing this! I apologise. That’s an exclusive right?” says Olivia. Later on, they’re distracted again as Queenie accidentally spits across a table when talking, and they’re in fits of laughter. “Don’t call me out on this big interview!” she screams.

Olivia also mentions her interest in songwriting, particularly looking up to artists like Lorde, Julia Michaels and Benny Blanco, and it’s something that she’s recently been working on with other members of the group. “Me and Lillian just wrote a song, some of our songs are being sent to Tayla [Parx]’s team so they can level it up, because you know, we’re still new at this, we’re like little sponges, babies in the industry, but we have an amazing team to help us learn.”

“We’re very fortunate that our team is so collaborative with us,” adds Lillian. “They’re always telling us ideas; we come up with ideas for them, you know, switching things around if we get something else.”

Their latest release ‘Tiptoe’ was co-written by Tayla Parx (famously part of Ariana’s 7 rings bestie group), who seems to have had a hand in more Boys World releases than we know, as the girls effortlessly flex how they shared cupcakes with her in a studio session to celebrate Tayla’s Grammy nomination.

The singles already out – ‘Girlfriends’, ‘Wingman’ and ‘Tiptoe’ – make up three of the tracks on their upcoming EP, titled ‘While You Were Out’. “Track four will make you cry,” says Lillian. “And track five will get you hyped up,” adds Queenie.

Olivia jumps in, “So after that, we’re not done here, oh no.”

“Little do you know we already working on something as we speak,” Queenie says.


Get to know Boys World

Queenie
Age: 19
From: Manila, Philippines and raised in the Bay Area, California
Star sign: Taurus
Boys World is… Motivational
Last song I listened to was… ‘Hold On’ by Justin Bieber

Olivia
Age: 20
From: Columbus, Ohio
Star sign: Aquarius
Boys World is… Chaotic
Last song I listened to was… ‘Up’ by Cardi B

Taken from the May 2021 edition of Dork, out now. Boys World’s single ‘Tiptoe’ is out now.