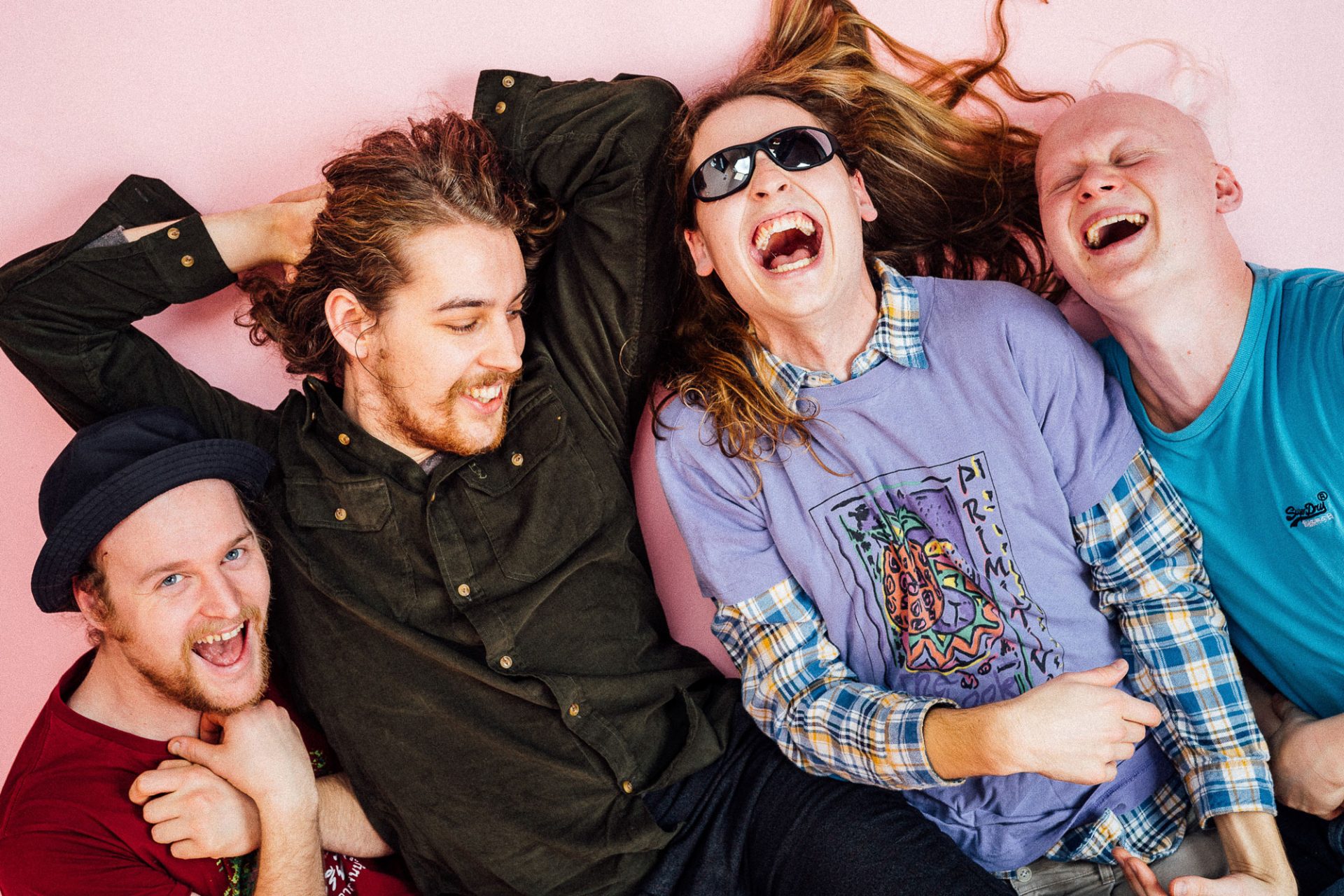 Bull’s opening statement ‘Discover Effortless Living’ is gearing up to be one of early-2021’s most charming indie debuts.

Masters of joyous indie-rock, York four-piece Bull bring the summer sun to cold winter days with their debut album of festival-ready bops – and the band can’t wait to share them.

“There are a lot fewer gigs than I was expecting,” reflects guitarist Dan Lucas on the realities of being a career musician in 2021. Bull have been sauntering around the York music scene for almost a decade, but the fruits of their labour have arrived at a surprising and difficult time in the form of a signing to major player EMI and the release of a debut album all in the space of one elongated pandemic year. “I’m sure they’ll come – it’s been exactly how I’d imagined for the first ten years,” frontman Tom Beer adds.

Along with investing in cryptocurrency, the group have been busy behind the scenes preparing for their March due date with plenty of mischievous artwork, including an ambitious album cover. Drummer Tom Gabbatiss explains: “It’s a photograph taken by a drone – we had a day out in Scarborough and just picked up random items from the streets…” before Tom B chips in: “It’s amazing how much stuff you can find just laying around! We spent a few hours assembling it all in my garden, arranging by colour and texture, along with some throws Dan brought – I’m glad you didn’t think it was a real photo, that’s kind of the point.”

This constant push for creativity is what makes these four lads such a unique band, always trying to surprise those who stumble across them. Bassist Kai West takes the lead on artwork, drawing posters and t-shirt designs for Bull’s various exploits, and this had led to some interesting merchandising. “The Sea Monkeys are brine shrimp eggs that you put in water, and they hatch. Heat lamps are recommended, but that’s an optional extra,” he reveals. Dan even whips out a skateboard deck featuring his own image and exclaims, “Kai drew me on a skateboard, which you can buy!”

Fortunately for listeners, this innovation applies to their music too, pushing the limits of what is commonly considered indie-pop-rock. When asked about the dubious claim that a George Foreman grill managed to work its way onto this record, Dan answers. “It’s actually a sandwich made in said grill. If you listen closely on ‘Eddie’s Cap’ and can pick out a strange, subtle crunching sound in the breakdown, that’s a Turkish-bread toastie.”

Turkish-bread toasties are apparently a common delicacy in their Amsterdam studio helmed by experienced producer Remko Shouten, who himself has a deep history in music, specifically with the band Pavement. “Remko is a great sound engineer, he knows exactly how a band should sound – Pavement are my favourite group, so that was a match made in heaven,” Tom B clarifies. “He definitely influenced the album with his unique taste in music. Pavement have a wacky, bouncy, sort of electronic element to their music – silly but very cool. He would embrace any idea, was very professional, had great equipment and captured the sound exactly as intended, all while allowing us to have fun.”

Wacky, bouncy and fun are words that very much fit ‘Discover Effortless Living’, so it’s easy to see the results of these trips to the Netherlands. The infectious joy it spreads is hard to resist, and this is something the group very much intended. Tom B comments, “I’ve realised recently that I like blissful music that just makes you happy to hear something so beautiful, so we try to capture those evasive, magical sounds. The lyrical content is less happy in places; when you write songs you tend to be on your own, and I don’t like being on my own very much so that’s why the lyrics go a bit ‘woe is me’. But music-wise, we just want to make people happy – that’d be great.”

Delving more into this lyrical element of the writing, he confesses that, “there is no specific underlying lyrical theme across the whole album. When I write a song, it’s a different person each time – they’re all different versions of myself with different opinions and feelings. I don’t feel now how I did when I wrote any of them on this album, and none of them are the same, they’re all their own thing. The real theme is Bull: Greatest Hits.”

This approach could easily lead to a disparity across the tracks, but that is not the case here; the only chaotic elements are those that are thrown in purposefully to give the tunes a dynamic tone, such as the abrasive vocal performance in ‘Smoke’ which contrasts with the delightful harmonies generously sprinkled throughout.

“Regarding that chaotic aspect; we may have spoken about it occasionally in the rehearsal room, but you don’t get that animal instinct of ‘I’m going to scream now’ unless you’re in the right situation, such as during a gig,” Kai discloses. “There are lots of loud bits in that song which definitely weren’t planned.”

“Every time you play live, the song is performed a bit different as you react to the environment,” Tom B adds. “Sometimes this is lyrically driven, so it’s a response to the words, but it can also be reactionary to the music in terms of arrangement or melody.”

Bull have certainly had a wealth of live music experience to play around with their arrangements and figure out the optimum composition for each song featured on this record, after racking up an impressive gig count of over 500 shows. “It’s like you exercise a muscle; the more you do it, the better you get, the stronger you become,” Tom G says on the strain of such excessive touring. Kai adds: “That’s the exciting bit, performing live is what gives us energy, and that’s how we keep going.”

The work has clearly been put in both on and off stage, and the group have even received praise from icons such as Elton John and Declan McKenna, and met some of their personal favourites. “I’ve been star-struck on a few occasions, one of which was when we met Spiral Stairs, which was a real important trip for the band,” Dan describes. “We met Spiral Stairs, our good friends Canshaker Pi and our producer Remko all on one night in Berlin. I was still able to speak to them and have a normal conversation, which was nice. It didn’t make me nervous in the same way that a first date might.”

It’s obvious that Bull don’t allow any common industry pressures to impact them. “There’s an expectation to get down, party and groove – to be the boogie king. I feel pressure to do that, but I also feel like I am able to rise to that challenge – that’s what drives and motivates me,” Tom B quips. “There’s no real pressure though, anyone can do what they want, that’s the law of the land in music – come on, that’s the point!” Tom G summarises this more succinctly; “We follow the Big Beat Manifesto!” The Peep Show fandom is evident here.

Debut albums can be a make-or-break moment, but ‘Discover Effortless Living’ isn’t trying to make a bold statement. “Sorry to say it but no, there’s nothing I want to do with it, it’s just an album of songs,” Tom B reveals. “When we play live, we want people to have a good time, and I’d love it if people were listening to the music and just enjoying it!”

Dan concludes: “Music is great in that you can feel such different things just by changing sounds, so if you can put sounds together in a way that makes you happy… who doesn’t want to be happy?”

Taken from the April 2021 edition of Dork, out now. Bull’s album ‘Discover Effortless Living’ is out 26th March.