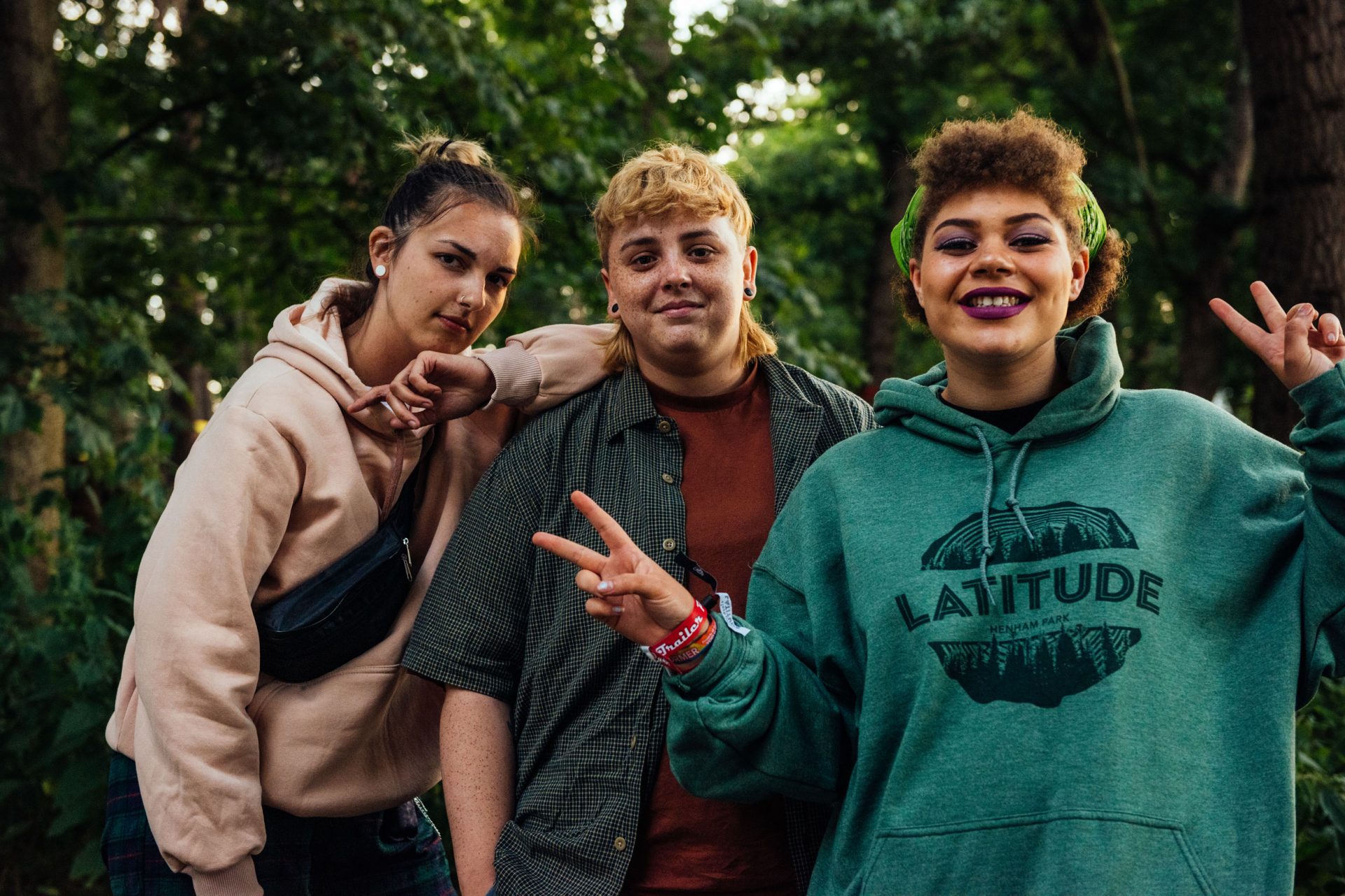 Cherym: “Our main job is to make our gigs a safe place”

Northern Irish trio Cherym have turned their ‘fun’ dial up to 11 with high-energy pop-punk tunes that wouldn’t be out of place on the best 90s-00s teens flick soundtracks.

Since 2016, Derry trio Cherym have been standing firmly on their own musical ground, but when Hannah Richardson (guitar and lead vocals) and Nyree Porter (bass and vocals) first met in school, there was nothing to indicate that one day they’d even be friends, let alone start smashing stages across the UK together. “We hated each other,” shares Nyree. “It’s mad, but she sang, I sang. We were just always in a constant battle with each other.”

A few conversations later, they realised that they’d got a lot in common and the potential to build something great on their shared ground. Not long after, they scouted Alannagh Doherty (drums and vocals). Throwing into the pot of all their, quite eclectic, tastes, they brewed their own delicious mixture with just the right amount of sweetness, sharpness and a tiny pinch of sass.

“We all come from very different musical backgrounds,” Alannagh explains. “Nyree loves country. Hannah’s very into pop-punk, post-punk and alternative. I’m more into metal. Heavy stuff. We all take a little bit of what we listen to and project it onto our band. It makes this wonderful sound that we call Cherym.”

Hannah adds: “I would say probably bubblegum punk or something? I wouldn’t say it’s really dark, but it’s quite poppy. It also has big, fuzzy guitars and big chunky melodies. Like really, really solid melodies and heavy drums.”

Lyrically, Cherym don’t play around: there are no overcomplicated metaphors, no layers-over-layers of meaning. Every time, it’s a real thing that they’re dealing with. A thing that their fans can connect to with no unnecessary fuss. Their newest single ‘We’re Just Friends’ and a cute retro-style animated video for it are prime examples of this no-nonsense method.

“This is another wave of feminism”

“We decided that this is going to be a really cheesy, upbeat song about your soul-mate or whatever. It came about like that, and then we all just were like, ‘yeah, let’s go record this because it’s class,” Alannagh says.

The track’s title is a parody spin on the heteronormative perception of WLW (woman-loving-woman) relationships, often wrongly looked upon as a ‘just friends’ connection.

“We’re not a political band, but we’re all very active and politically aware,” she continues. “It can be unintentional that we bring our views into songs by just being like ‘Hey, I’m queer’, and then people are like ‘that’s very like, out of the norm’. Well, it’s my norm.

“We’ve actually done interviews before where it came across as like, ‘why would she want to be abnormal?’ We were like, ‘this is our normal’. It was really, really strange to me, just because I don’t know, it wasn’t normal for them.”

As young artists trying not to be defined by their gender or sexuality, it’s a struggle to keep nerves calm in front of such ignorance or gather enough willpower to come up with a reply. “Sometimes there’s just no response to it,” Nyree sums up.

Instead of wasting energy fighting with windmills, Cherym prioritise making a change and creating their own surroundings. “If somebody were to come up to us at a gig to say something like that, then they’re out of the gig. It wouldn’t be fair if another queer person was approached by that person and then felt unsafe,” Hannah explains.

Cherym’s inclusive thinking fused with their heads-on attitude conjures the ghost of 90s riot grrrl. “This is another wave of feminism,” Hannah states. “It’s so amazing to see because women are still totally discriminated against, especially within this industry because it is male-dominated. Everything has been a boys’ club for so long. All women should be able to take up space and not feel threatened. Just feel like they can do it and that they’re at a safe place to do so. We’re really excited to be a part of that.”

When asked to define 2021’s riot grrrl, Hannah is quick to answer: “She listens to Cherym. She has a mullet. I think that she has blond hair [laughing and pointing at Nyree]. I would say that she probably doesn’t give a fuck about anybody’s opinion, and she shouldn’t.”

“The modern riot grrrl has to be all about intersectionality because that’s one thing that the first riot grrrl movement forgot a bit, or at least it wasn’t brought to the front,” Alannagh continues. “Focus on that. It’s so important that women of colour and non-binary people of colour are included in that, and also trans people and those from different classes. Of course, the regular movement has always been very punk working class. Including everybody in it and not just the white female that’s really important.”

“There are so many more amazing female, non-binary fronted bands that have come forward,” says Hannah. “Problem Patterns, Gender Chores and Strange New Places are all amazing bands based out of the north [of Ireland]. They really take up space and make the scene a lot more queer-focused, which is so important.”

As for what they want for the future? “Just taking over the world with our music,” laughs Hannah. “We just want people to come and know that they’re so loved and supported at our gigs. Just fuck all the bastards who think they’re going to come and ruin our safe space. Don’t you agree?”

Taken from the October 2021 edition of Dork, out now. Cherym’s EP ‘Hey Tori’ is out 1st October.

The 1975‘s Matty Healy turned up to support Phoebe Bridgers in LA, and brought some unreleased songs with him

Rejoice! The live version of WILLOW and Tyler Cole‘s ‘Meet Me At Our Spot’ has arrived on streaming services