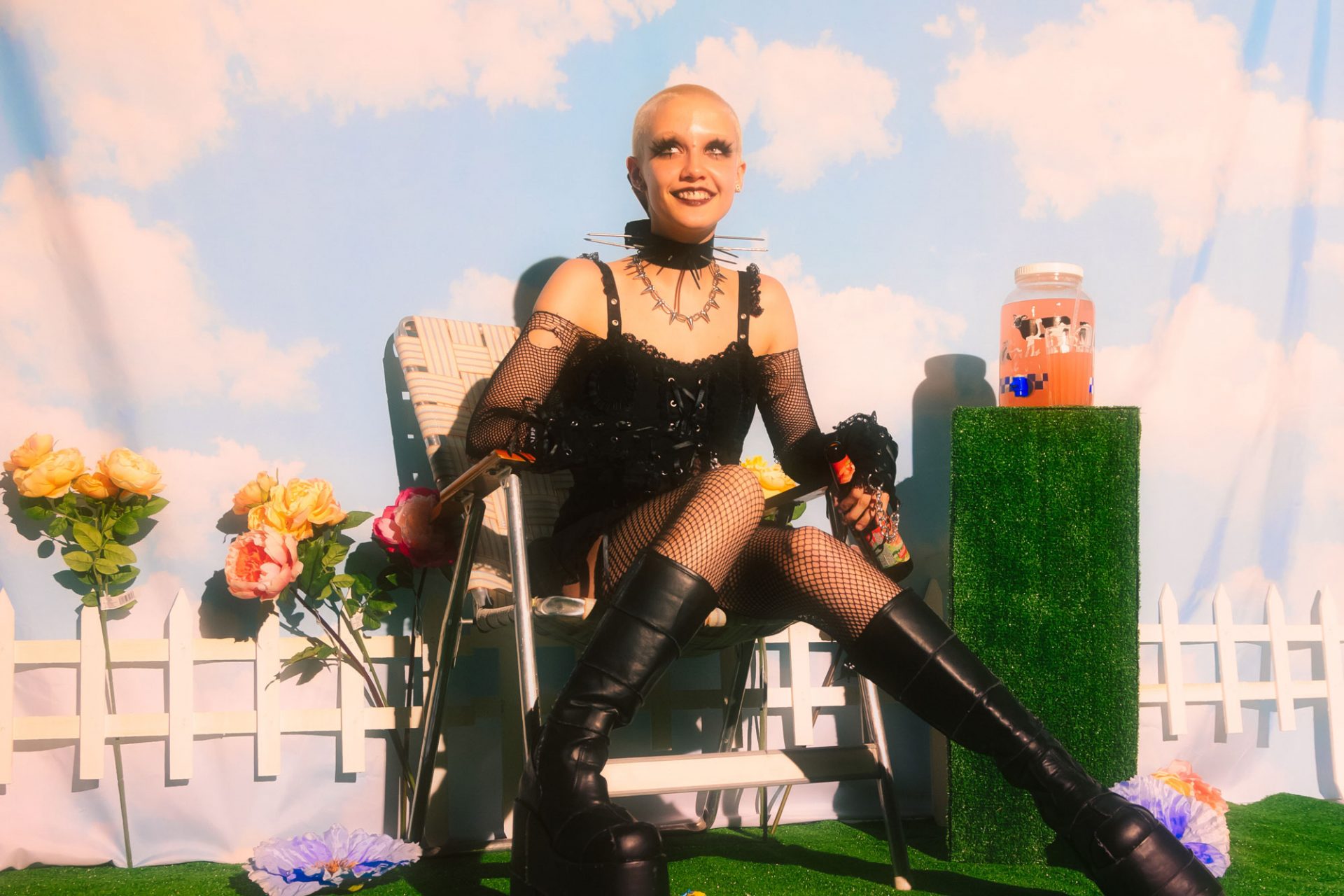 Chloe Moriondo is a fully-certified Dork legend, so when we heard she was coming back with her first new solo music since last year’s amazing ‘Blood Bunny’ album AND it was an EP all about dogs (the greatest animal in the whole world) with a lead track named after and dedicated to her iconic little carrot-loving friend Sammy, we got Chloe on the line to get the low-down.

Hey Chloe, we’re here to talk about a true legend, and that is your dog Sammy – why did you decide now to immortalise him in song?
He is honestly my best friend, and I have no idea where I’d be without him. I got him as a birthday gift when I was 8. He’s the greatest gift I’ve ever received in my life. He’s what I look forward to coming home to. I love him so much. He’s the best little guy in the world, and I needed to write a song for him. It took a second for me to really find the vibe I wanted to go for. Once it was there, I was really excited about it, and I’m really glad it’s in fruition right now.

Tell us all about Sammy then, what’s he like and what sort of things does he enjoy?
He’s crazy. He’s a crazy little guy. He’s ten years old, so he doesn’t get up to much, but everything he does is fun. We have a pool in the backyard, and he frequently falls in in the summer. I’ll look out the window and be like, “oh damn! Sammy fell in again!” so I’ll have to go grab him, and he’ll be paddling all around. He’s blind, so he doesn’t really know where he’s going ever.

What is it about dogs in general that make them so special?
I’ve always been a dog girl. I love all animals and also consider myself a cat person, but ever since I was little, I always wanted a puppy. I would beg my parents for years, “please can I have a dog?” All my little friends in elementary school, I made them help me write three pages of “please can I have a dog?” and it didn’t work, but they were always so special to me growing up. Finally getting Sammy after all those years of really wanting a little furry companion was a really special thing.

What do you think humans can learn from dogs?
As humans, we can learn a lot from dogs. Dogs are very loyal to the people that take care of them. That’s a big thing that human beings need to appreciate a little bit more. It’s great that dogs as loyal as they are also kind of don’t give a shit. As long as they’re eating food and got some water and somewhere to go to the bathroom, they’re just snoozing and chilling and playing all day. That’s what more people should aspire to be like, just be happy with having what you need and trying to make the best of it.

Was it a nice little break for you to take some time out from the serious world of being a major artist to do a playful little EP like ‘Puppy Love’?
Yeah, It fell together really organically. We kind of just realised I was writing a lot of dog songs and putting them together in a folder. It just went in that direction from there. It was fun and sweet and felt refreshing for sure to work on something wholesome and not super dark and heavy.

How would you characterise your progression as an artist since ‘Blood Bunny’?
I’m going in a really experimental direction. I’ve gotten really tired of writing songs alone in my room with just a guitar, as fun as it is, and as much as I like being vulnerable, I’ve been having a lot of fun collaborating with other people and making crazy crunchy shiny pop-sounding stuff. I’ve been having fun trying different stuff in different genres.

Do you have any titbits of exciting info you can give us?
There’s a song that I played a lot on tour and that I’m going to be continuing to play that’s not released yet that’s going to be released a lot sooner than I expected. That’s my tidbit. If anyone knows of the unreleased song, it starts with an H, and I’ve been teasing it everywhere because I’m really excited about it.

What else can we look forward to from you this year?
There’s a whole new album coming out and a whole new project! There’s tons of music coming out in 2022 that I’m really excited about.

“We can learn a lot from dogs”

You recently did a song ‘Dizzy’ with Alfie Templeman and Thomas Headon, who we also love, cherish and respect just like you. If you, Alfie and Thomas were dogs, what type of dog would you all be?
I think Alfie would be some sort of border collie mix. Maybe a border collie/golden retriever. Thomas would be a pure golden retriever or a golden lab. For me, as much as I hate to say it and a lot of people would hate this about me, I’ve always identified with this dog since I was a child because of the movie Beverley Hills Chihuahua! There’s a tiny white chihuahua in it, and her name is Chloe. I was obsessed with it. As annoying as people can find chihuahuas, they are dogs like any other animal, and they have different tempers. I think I’d be a really cute, chilled chihuahua.

What’s it like working with people like Alfie and Thomas? It feels like there’s a whole scene bubbling up with like-minded young artists who are making pop on their own terms in a unique style.
It was really amazing to be able to hang out with them and work with them. We all met on the internet. I still haven’t met Thomas in person yet, but it’s hilarious because he was supposed to do some shows with me but couldn’t, and Alfie could, so I met him in person, which was really sweet. I’m excited to be able to hang out with them both in the UK. I think we’re all awkward little songwriters. I think we all have quirky ways of songwriting that mesh pretty well because we understand that we’re not stereotypical songwriters. It worked really well because of that. They’re cool dudes. I like them.

Aside from dearest Sammy, do you have a favourite famous dog?
I do really enjoy Noodle the dog who became famous recently. He took the world by storm with the whole no bones day thing on TikTok. I think he’s a great pug. I love an old dog that’s just sweet and hangs out.

We have a few questions we’d like to ask Sammy, but I’m sure as someone who knows him so deeply you can help him answer. So, firstly, where’s your favourite place to lie down?
Top of the couch. A little corner in the top left where he can make a little den and rip that shit apart. I love his little cave.

What’s the best thing you’ve buried?
Just pee. All he does is pick up grass and bury nothing but pee.

Taken from the April 2022 edition of Dork, out now. Chloe Moriondo’s EP ‘Puppy Luv’ is out now.