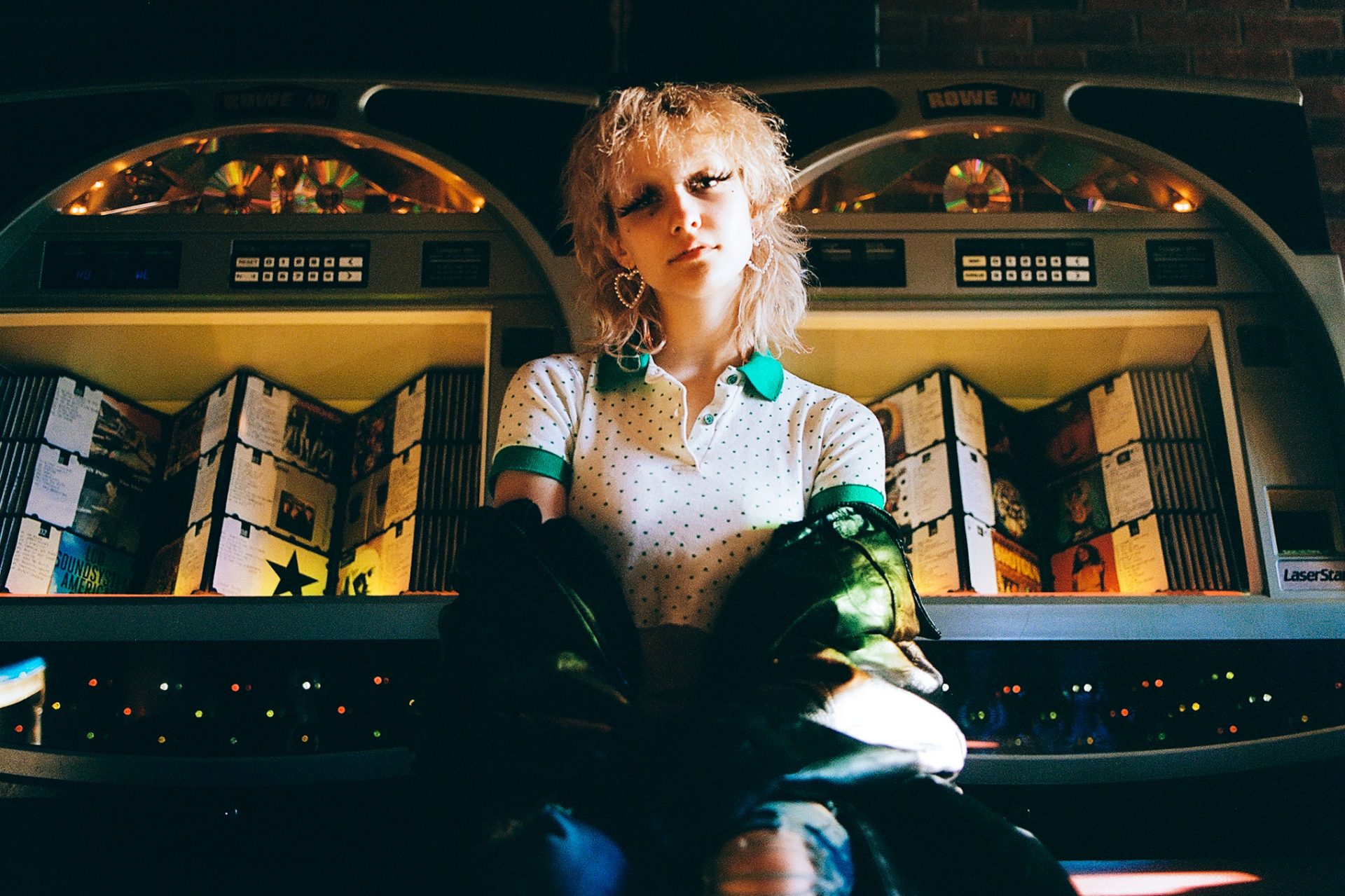 Chloe Moriondo: “I want to sing about eating these gross, scummy boys”

From teen with a ‘uke’ to bubblegum pop rock brilliance, Chloe Moriondo’s new album is a vital signpost to just how far she’s come.

“My rock chick evolution is going strong,” exclaims Chloe Moriondo as she talks about her transformation from sweet ukulele playing 13-year-old to a full-blown amazing pop star. She’s preparing to release her maybe, arguably, possibly debut album proper, but don’t worry, we’ll get to that later. For now, Chloe is on the crest of a wave with ‘Blood Bunny’. It’s certainly been a steep rise for one of indie pop’s brightest new talents.

“It’s crazy. I never expected it to get so big so fast,” Chloe explains from her bedroom in Detroit. Her bedroom is where all her best creative output comes from, see – most of Chloe’s passions can be traced back to these four walls. There are no superstar predilections with Chloe, no desire to turn herself into a character or concept. She knows what she likes, and she cherishes it dearly. “I have a lot of weird little hobbies that I get into and hyper fixate on,” she says exuberantly. “I’m big into video games. I’m on my Nintendo Switch every single day.” The Legend of Zelda: Breath Of The Wild, Stardew Valley and Resident Evil 4, to be precise. She also has a passion dear to Dork’s heart. “I’m also obsessed with animals,” she says. “I’m a huge animal person. I have a pet tarantula, and a gecko, and a puppy. I love them with everything inside of me. I would die for them.”

So, that’s a bit about Chloe, but what about that ace new album and the whirlwind year she’s just had? Passionate about everything she does, she’s poured everything into a collection of songs that show a real step up from bedroom pop naivety to pristine power-pop perfection. “This is my first big kid album,” she explains about ‘Blood Bunny’. “I released my own independent one previously. I called it an EP, though, as I didn’t understand the difference between an album and an EP. I made it all myself. It was very 13-year-old me.”

‘Blood Bunny’ is a whole world away from the youthful charm of her previous releases, though her earliest recordings and relationship with her nascent youtube community back in 2015 firmly established the platform for her musical evolution today. “I’m very proud of this one,” she exclaims. “I got such a lovely start on youtube with so many fantastic, cool young people supporting me. I didn’t realise how big my music could be with the help of other people. I could make music that sounds exactly what I always wanted. I’ve been experimenting with different stuff, and I feel that this album is a product of that.”

The songs on the album are the first that Chloe has written in conjunction with other people, and the ability to call on different perspectives has certainly helped drive her music in a progressive direction. Some of the people she has worked with include Pete Robertson – formerly of The Vaccines – who has worked with Beabadoobee, and Steph Jones, who has worked with the likes of Panic! At The Disco, BLACKPINK and Selena Gomez. Chloe also worked with several other producers and writers in a real collaborative effort, but ultimately the vision is all her. Chloe’s attitude seeps through every note of the album. “I’ve definitely grown a lot in the past year when it comes to music and writing,” she ponders. “I just recently started working with other people on music. I’ve gotten a lot of different perspectives on songwriting.”

As she moved into working differently, it was important for Chloe to get in the right mindset for change, which was a challenge at first. “I had to get over some nerves and some weird mental roadblocks when it came to writing new music in a style that I wasn’t writing in before,” she says. “I did get nervous that there would be people who listened and would be like, “I wish you could go back to the ukulele!” I started writing in a lot of different ways. With new people, new perspectives, new words. There was a lot of change.”

“I have a pet tarantula, and a gecko, and a puppy. I would die for them”

“I wanted people to see my music as a little heavier, more pop rock-influenced,” she continues. “I’ve always been obsessed with Avril Lavigne and Paramore. They are such big inspirations for me. I was hoping that people would hear that.” Despite opening herself up to writing with other people, the core of Chloe’s songwriting remained the same as it was when she started out. “Songwriting is a different process for everyone,” she explains. “There are some people who do it in a very technical and set way, but personally, I feel I can only write good stuff when I’m least expecting it. I’ll be in bed just about to go to sleep, and I’ll think of a really sick chorus idea that will be a concept for a new song, so I’ll open my voice memo really quick, record it, and then pass out. It’s always in the middle of a super inconvenient time. That’s usually when I start a song, and later on, I’ll be in my room alone and think maybe I’ll finish that one.”

Lyrically, the album finds Chloe in a state of emotional flux as she rides a rollercoaster of emotions. “There are lots of underlying themes of teenage angst in all of my songs,” she says. “Especially on this album as I’m building up to the end of teenagehood. It’s a weird time as I’m 18 now, and I started making music when I was 13. I’m really proud of the changes in my music. I want people to listen to it and go, oh, she’s a little rock chick who’s singing about eating boys and stuff.”

Ah yes, eating boys. Another one of Chloe Moriondo’s passions, it’s also the title of her turbo banger single that leads off the album. “’I Eat Boys’ was such a fun song to write,” she laughs. “It was very heavily influenced by the movie Jennifer’s Body, which is about Megan Fox as a hot teenage cheerleader who just eats a bunch of gross boys, and that’s it. It comes from a lot of real frustration that I and many other feminine people have experienced growing up with teenage boys, and the part of the male population that can be a little shitty. I like to vent out my frustrations in that way. I want to sing about eating these gross, scummy boys.”

Challenging gross boys and tackling issues head-on is central to Chloe’s whole approach. She’s fearless and deeply committed to what matters. “It’s more important than ever for artists and people who have big platforms to speak up about things that are important,” she says confidently, as she mentions her vocal support for issues like the Black Lives Matter movement. “As a teenager and someone who has grown up on the internet, I’ve found that it’s important to listen before you make any definitive statements. The best way that I’ve found to support causes that I care about is to listen and provide as much support as I can in that way, rather than speaking over people.”

Listening is essential to Chloe, but another important thing is using humour to get her point across. ‘Blood Bunny’ is frequently laugh-out-loud funny in a playful and hugely exuberant way. For Chloe, it’s just a case of natural expression. “It’s important to remain honest,” she says. “There’s no way that I could make anything good unless I can say every single lyric in my songs with my mouth. As weird as my lyrics are sometimes, the more gross and silly and fun they are, the more willing I am to sing it.”

Chloe has many passions in her life, but one that has remained constant, certainly musically, has been her love of Paramore. She brings that to life on the album with the witty and tender ‘Favourite Band’.

“Everything about that entire era of music was so important to me growing up,” she remembers. “I wanted to write that song about a relationship I was reminiscing about being in. Where you’re with someone and like damn! Your music taste is NOT GOOD. I wanted to write a song where I could hide all these little easter eggs about my favourite bands but also about that annoying ass feeling you get when you’re in the car with someone you’re supposed to be liking, and they’re playing shit that you’re just not into.” And has Hayley Williams been in touch and heard the song yet? “I wish,” laughs Chloe. “The thought of her hearing any of my music or even knowing I exist makes me want to pass out,” she adds.

Despite her excitement about the forthcoming album, there’s one major cloud that hangs over everything in the musical world at the moment, and that’s the inability to play shows. “I feel like I’m 100% more excited to tour next year than anything else,” she yearns as she contemplates the prospect of properly rocking out on stage for the first time. “Things have gotten so much bigger and crazier than I expected them to get. I’m overwhelmed in every good way possible.”

We’ve already detailed some of Chloe’s passions, but one of them deserves a bit more probing – her love of ghosts. We know all about it because of her 2020 song ‘Ghost Adventure Spirit Orb’, so we decided we’d give her a gentle spooky scenario.

Picture the scene, Chloe. You’re tucked up asleep in bed but wake up feeling a little peckish so decide to head downstairs for a snack and see a ghost rummaging through your fridge! What would you say to the ghost, and what do you think they’d be taking from the fridge?

I would be like, dude! Where have you been? I’ve been looking for you. I’ve been trying to find a ghost in this house for the whole 18 years I’ve lived here. I have a feeling the ghost would be taking my uncrustables. Those are really good. They are basically these little pre-made peanut butter and jelly sandwiches without the crusts. They are circular and pre-wrapped and are fantastic.”

Do you think ghosts are misunderstood?

“I think so. I believe in ghosts so thoroughly, but I’ve never been able to have an experience with one myself. I think they are misunderstood, cos there are shows about them being all grrrr and messing with videos and stuff, but I think if ghosts are real, they don’t give a shit about us. They’re just vibing. Ghosts just want to have fun.

Taken from the May 2021 edition of Dork, out now. Chloe Moriondo’s album ‘Blood Bunny’ is out 7th May.