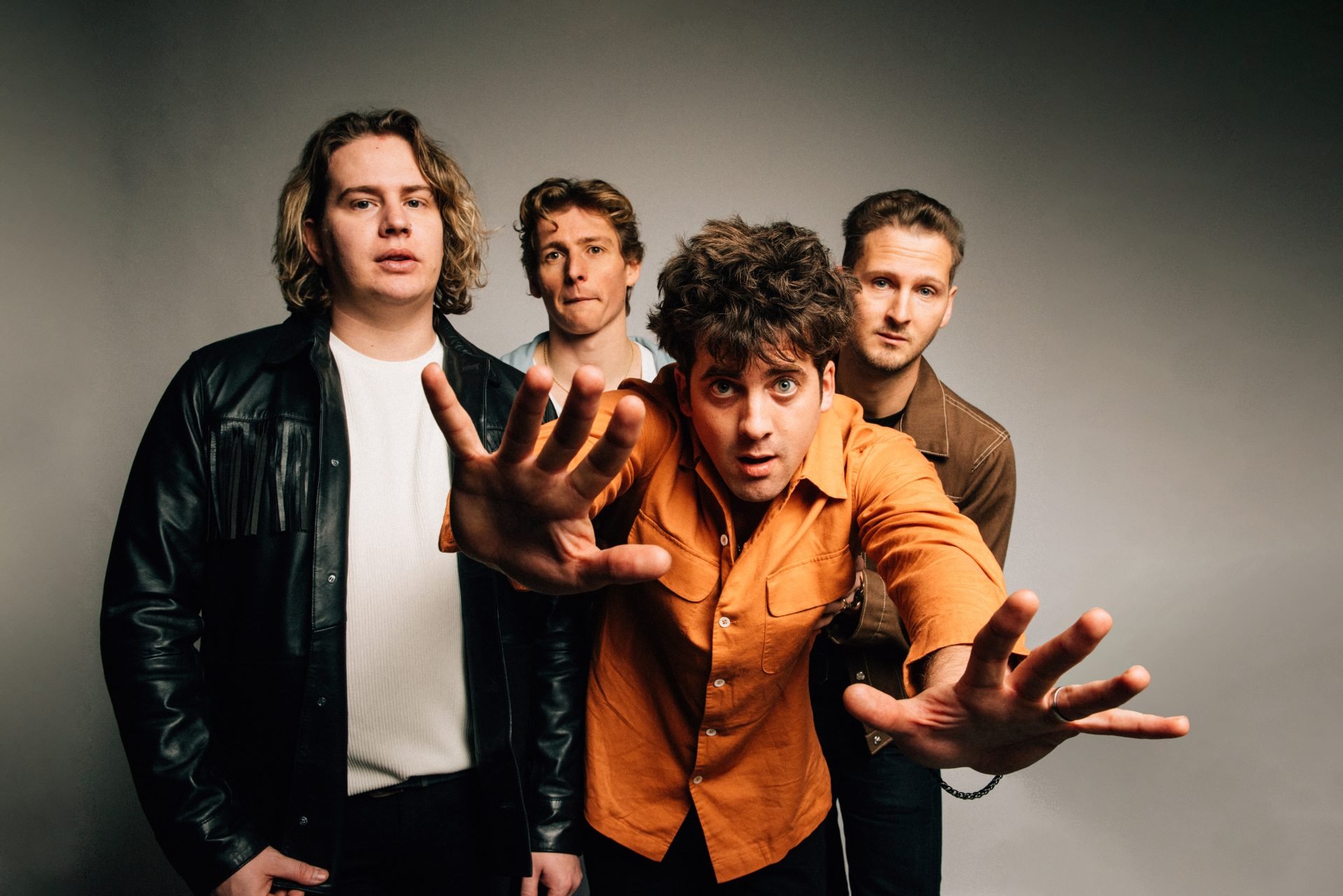 Circa Waves: Never going under

With concern for the future, and a sense of hope that we can sort it out, Circa Waves are back with their fifth studio album, ‘Never Going Under’.

Back in March 2020, Circa Waves dropped their fourth studio album, ‘Sad Happy’, which explored the juxtapositions of modern life through a diverse mix of string ballads, rock stompers, and straight-up pop tunes. The ambitious project made an immediate mark before being swiftly overshadowed by the announcement of a national lockdown.

With tour plans scrapped and frontman Kieran Shudall trading centre stage for less glamorous parenting duties, the unprecedented times certainly proved interesting. “As you can imagine, we’ve been locked away with an insane child for two years,” he says. “It was a bit of a blessing in disguise; I got to be home for those first couple of years of his life, which I wouldn’t have been otherwise.”

Thankfully the darkest days are done, and the indie-rock group can deliver the tunes that fans have been thirsting for over the last two and a half years. As he longed to show them off, Kieran invested his pent-up energy into a new catalogue of tunes that would capitalise on the eventual return to sweaty basements and sunny fields; that venture has now come to fruition with the band’s new LP, ‘Never Going Under’.

“With this next record, we weren’t able to play live, so my desire to do so went right into the songs,” the singer confirms. “I wanted the tracks to become big live moments, so it was very deliberate that it sounds a bit rockier again. I always like to make tunes that are going to cause a bit of chaos.”

The restoration of a guitar-led approach is a drastic change from Circa Waves’ last two projects, both of which experimented with alternative sounds while relying on the same catchy, poppy songwriting structures. That freedom does bleed into their new project – an inevitability given Kieran’s work outside the band, where he helps craft hits for some of your favourite rising acts.

“A lot of pop and dance songs get to the point really fucking quick, and it’s always impressed me how quickly they hook the listener in,” he observes. “I’ve learned a lot from getting involved with that; it all helps. If I just wrote Circa Waves’ songs alone, it would get pretty stagnant pretty quickly. Having that outside influence from other people – writing with Alfie Templeman, Sea Girls, Courting – it all helps me develop the band as I grow myself.”

That external influence has helped the group to hop genre lines and avoid the pigeonhole of any single sonic arena; despite kicking off their careers with the youthful exuberance of ‘Young Chasers’, the evolution of Circa Waves is undeniable. “I physically can’t write the same genre over and over again,” Kieran confesses. “I don’t think like a 24-year-old anymore. I’m 35, and I can’t think like that now. It would be like asking the listener to be the same person they were ten years ago; it’s impossible. It’s easier to write songs when you change the textures around you, or at least it is for me.”

As well as a more elaborate sound, ‘Never Going Under’ takes a new stance on the world. If ‘Sad Happy’ was a cheery inspection of life that upheaved a spot of worry, its follow-up displays the festering result of that anxiety; a mountain of growing concern that began by imagining a child – his child – tackle the never-ending list of global issues we see today.

“I don’t know anyone who’s not concerned with the world at the moment, be it with energy bills, dodgy politicians, or the wars going on,” he resigns. “Now that I’ve got a kid, that worry has turned into more genuine concern – what is social media going to be like in fifteen years’ time, when he’s 18? Are the waters going to keep rising? Will I need to move more inland? We live in a time when it does feel like there are possible end-of-the-world scenarios every five minutes. When I was a kid, I lived a life of reckless abandon and didn’t know any of that; I just played Tony Hawk and drank Strongbow. I do feel sorry for the youth at the moment.”

On the other hand, addressing these issues with the urgency required has given Kieran a sense of hope that he hopes will rub off on those who take a listen. “Having a kid makes me want to head things face on, not bury them. I wanted this record to be resilient; right from the first song [title track, ‘Never Going Under’], I want this album to give people a much-needed kick up the arse, assuring them that we can do this. It’s for me as much as anyone else – sometimes I wake up and have no idea what I’m doing either.”

While providing the motivation to get through these tough times might be the overarching mission here, the catalyst was a far blunter acknowledgement of the bad. “’Hell On Earth’ was the song that showed me a direction I liked, which I then followed as the arrow through to ‘Never Going Under’,” Kieran elaborates. Pointing to lying politicians and unemployment in particular, the track provides a solid foundation that allows him to admit his intensified sensibilities. “Your anxieties start to surface when you have a kid because you worry about them and you worry about the future for them. Every emotion is heightened, including love and fear. It’s a mad feeling.”

Despite being a proud parent, it is obvious that this frontman is tackling that challenge one step at a time. “It’s a strange thing – all of a sudden, you blink, and you’re supposed to be an adult, but it isn’t necessarily that easy,” he notes. “I always thought something would click, and I’d change, but really I’m just exactly the same person who now has to figure out how to be a parent. Just like anyone, I cry when there are anxieties or worries in my head, but I never saw that as a thing that dads did. It’s a battle – what is a man supposed to be? What is a dad supposed to be? I’m slowly becoming more honest with myself, and that makes its way into the songs.”

Slowly getting comfortable with being uncomfortable has allowed Kieran to produce intricate songs like album closer ‘Living in the Grey’ – a complex acceptance that life is not black and white.

“When we first started touring, we’d just had a major record deal, and all my dreams are coming true; we were in a Los Angeles bar after playing 100 dates straight… I just broke down,” he spills. “I wasn’t happy; I wasn’t enjoying it. I was feeling this medium-ness that I couldn’t explain at all. That’s what the song is about – not feeling much towards something you think you should and feeling weird about it. There are loads of things in life that you might expect yourself to be super happy with, but once you get to the top of the hill, all you can see is another one.”

Their relentless ambition has never faltered, and consistently shifting the goalposts is nothing new for Circa Waves. Moving with the times, taking things in their stride and making some rapturous tunes out of the confusing results, the Scouse outfit have made yet another step forward with ‘Never Going Under’ – but, of course, they’re still not satisfied.

“My obsession with trying to write the perfect indie song has never faded,” Kieran confesses. “I’m just obsessed with trying to write strong songs, so that’s probably why we’ve endured – I’m never content. I guarantee every artist at the top of the game is not content; there’s no way Chris Martin is ever content, or Bono, or Matty Healy – anybody who is fighting to be the best cannot be content, and that’s a good way of progressing.” ■

Taken from the February 2023 edition of Dork. Circa Waves’ album ‘Never Going Under’ is out now.