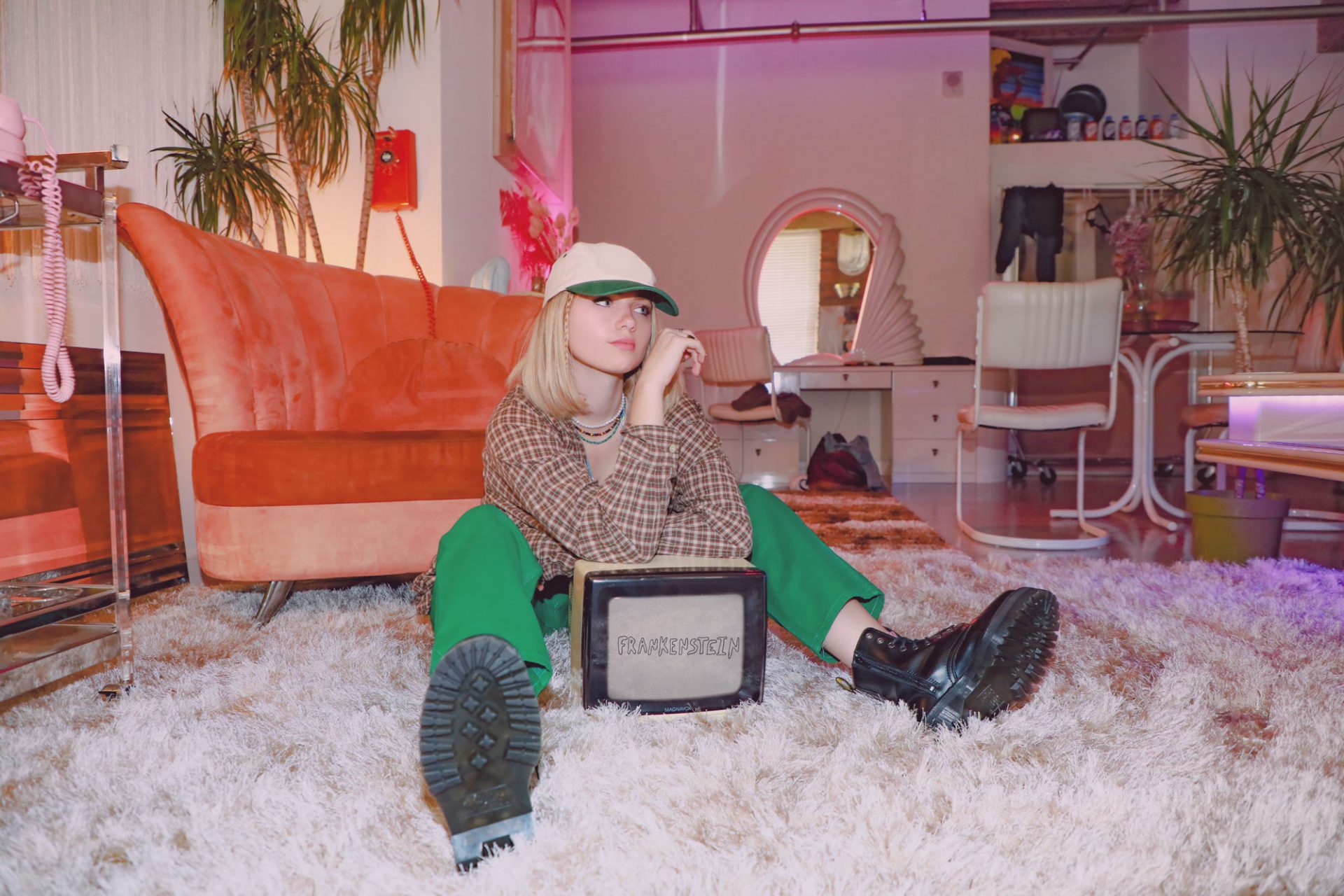 Last year her hit ‘Backyard Boy’ was everywhere; can Claire Rosinkranz follow it up? Of course, no problem.

If you’ve spent any amount of time online in the past year, then there’s no doubt you would have heard the name Claire Rosinkranz. With her song ‘Backyard Boy’ blowing up as a viral sensation, Claire has established herself as one of the most fun and vibrant new songwriters using social platforms in an engaging and creative way to reach new audiences. With one EP already under her belt, last year’s ‘BeVerly Hills BoYfRiEnd’, Claire is now preparing another one that looks set to take her witty, playful and hyper-melodic pop to the next level.

It’s certainly been a swift rise for 16-year-old Claire. “I released my first EP last summer and then had this whole journey of being signed and working with a label and a team, so that’s very different and exciting,” she says excitedly from her bedroom at her home in Agoura Hills, California. It’s really sunny there, btw. 70C. Imagine that right now. Sheer bliss. The subsequent year since her debut EP was released has seen Claire adapting her songwriting process of collecting fragments of words in notebooks to her new life of collating them into defined pieces of work. “The music has changed as I’ve changed as a person, and I’ve gone about life,” she explains.

“We all grow. I still start all the songs the same way I always have, but they’re based on different experiences that I’m going through now and what it’s like being in my shoes at the moment because it’s totally different to a year ago. It’s been a really cool experience. I know what my new life is going to be all about.”

For Claire, her new life as a blossoming pop star is the realisation of a lifelong ambition. “I just want to perform and tour and do big shows,” the words tumbling out of her mouth excitedly a mile a minute. “My goal is to be an artist and meet people and share my music with everyone. My biggest dream is for people to relate to the things I’m saying because I write so much, and that’s where everything stems from. That’s what makes me so passionate about music, and that’s the reason I’m passionate about singing and writing and getting the ideas out of my brain and onto a piece of paper so people can hear them. I want people to be proud of me for my songwriting and ability to connect to people through my songs.”

The development in her songs is clear, from snippets of melodies and snatched memorable lines to fully realised immersive pop songs dealing with the most universal of feelings and emotions, Claire is relishing looking deeper into herself. “I have to be alone when I write,” she says. “I can’t be around people. My brain just freezes. I’ll write in my bedroom, in my car, at the beach, as long as nobody is in earshot of me. I get really nervous for people to hear my process because it’s so messy. I have so much in my brain, and I don’t want people to hear anything before it’s complete or before it sounds good enough.”

+ Claire is obsessed with going to the beach and swimming in the ocean, as well as being out in the mountains. She loves Nature.

+ She likes writing and reading poetry.

+ She has a dog called Coco, who is a golden doodle mixed with 25% St Bernard.

+ If she could invent anything, she would invent an instant food machine that could make whatever she wanted in two seconds

“I love creating worlds and atmospheres,” she says of her songwriting process. “It can be about anything. It can be about the way I feel, how my life is going, things I want to experience. I write about feelings and emotions, but I’ll write from other people’s perspectives. I’ll put myself in different people’s shoes or write as a different character. It’s so cool how you can put words together and make people feel things.”

That sort of simplicity is key to Claire’s work. Her music is fun and playful, and even when things get a little bit darker, she’s there as a friend giving support and encouragement. Her forthcoming EP promises to highlight both the primary emotional dynamics of Claire’s music, mixing fun pop with deeper feelings. “It’s a variety of different stuff. It’s surprising, and I’m switching things up. They’re all fun.”

The first taste is killer single ‘Frankenstein’, which sees Claire take a typically creative slant on relationships as she fantasises about creating her perfect boy in a Frankenstein like manner. It also has one of the best intros of any song in recent memory and lots of cowbell. Obviously a good thing. “I love the cowbell! There aren’t enough songs with cowbell,” cries Claire.

‘Backyard Boy’ was the song that made Claire’s name, becoming ubiquitous on TikTok last summer. TikTok has certainly had a hugely positive effect on her career, but she’s keen to emphasise that she’s only doing what she would be had she been a music-obsessed teenager living online. The fact she’s now a global artist just means more people can connect with her. TikTok gives her that connection with fans and importantly involves them in the process. “I started doing it because it was so much fun,” she explains. “It was really cool because every time I posted something, people would be like, ‘oh my god, that’s so cool; I love how you’re in the studio with your dad’. It’s such a great platform because it’s constantly circling around and feeds into your other platforms,” she continues. “I don’t think about the numbers; it’s just fun for me. Sometimes because I’m a perfectionist, I get stressed because I need to market it a certain way, but then I think no, that’s not what it’s about, and that’s not why I started it. People can see it as my personal video diary and show the process of how I’m making music and how people can find me.”

Claire’s studio process that she documents on video is her working dynamic with her dad Ragner, a working musician composing jingles and TV scores. He combines his musical ear for production with Claire’s gift for words, and that’s how the magic happens. “If I write a song and go to the studio and tell him my vision for it, he captures it right away. He understands me, and it’s not uncomfortable to ever communicate about it. He only hears the musical aspect to it, and I’m always paying attention to the lyrics.” Another benefit of her dad focusing on the music is he might not hear the lyrics and avoid some embarrassment. “It’s nice on that level that if I’m signing about boys or whatever, he’s only looking at the music,” she laughs.

There’s one ultimate ambition that Claire is yet to realise, though. “I’m so eager to be able to go and perform for people and meet people,” she exclaims while talking about her plans to finally tour. “I talk to so many people online that I can’t wait to see their faces.”

Taken from the July 2021 edition of Dork, out now.  Claire Rosinkranz’ new EP is out this Friday, 9th July.