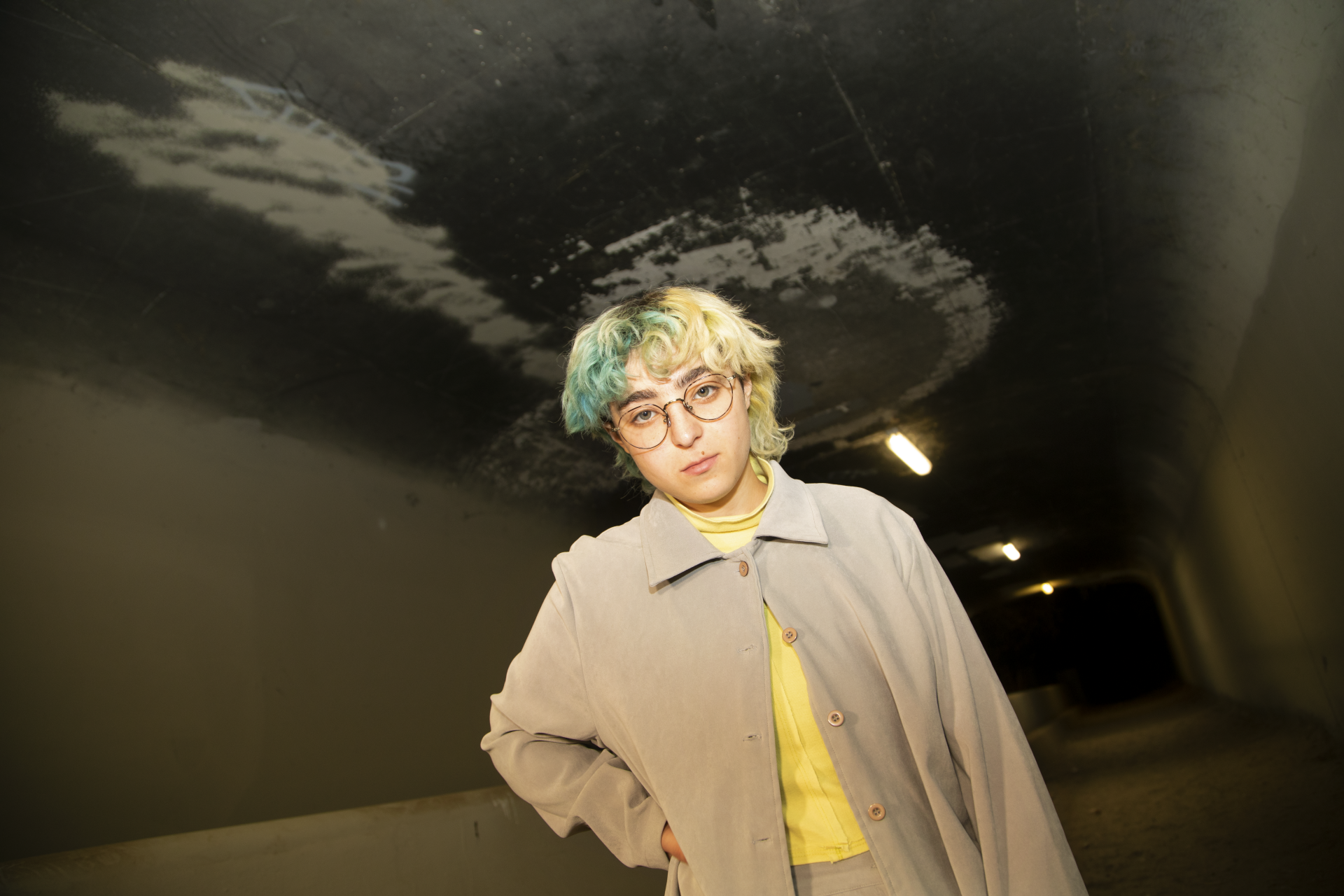 Claud: “People always call me bedroom pop, but I don’t really understand that”

With an ear for pop magic, Claud’s debut album is already one of the best of the year.

When indie-pop star Claud was a child, they had a love of turtles. They had two turtles, in fact – Samuel and Jake. While Claud thought that their two little turtles were young and vibrant, the reality turned out to be a little different, as they explain. “I took them to the vet years later, and they were 70-year-old women! I had no idea. They were so old.” In a way Claud’s experience with their turtles explains how reality can be quite different from perception and the feeling of forging your own path despite people’s perceptions has been a key part of Claud’s life. How has the turtle experience influenced Claud’s songs? “Oh, everything is about them,” they laugh.

2020 was obviously a difficult year for everyone, and while they might have been expecting to be gearing up to the release of their debut album by crisscrossing the world playing shows and meeting different people, instead Claud is at home in a cramped small house with their mum in California conducting interviews outside while the birds sing and flutter punctuated by the odd passing monster truck shattering the blissful calm. As we approach the release of ‘Super Monster’ though Claud is gearing up to release their defining statement after years paying their musical dues and navigating their way through a formative musical journey. It’s an odd time of excitement and trepidation.

“It’s hard to tell if people are listening from where I’m sitting in my house,” they explain. “I guess I was being played on NPR radio quite a bit and my mum was reached out to a bazillion times by her friends because that’s who listens to NPR the most. That felt really surreal because now I was like ‘Wow! Now my mum really believes me!’”

Claud had already been making music for a number of years from their project with childhood friend Josh under the name Toast to various other musical excursions. Even now as a star in their own right Claud is part of another musical collective, Shelly, the band they formed with Clairo. Everything previously though has led up to the coming of age expressionism of ‘Super Monster’.

“From the two projects I’ve had, and also now with Shelley, I’ve managed to stay within the same genre and realm,” says Claud before explaining their issues with the musical term most people have attached to their music. “People always call me bedroom pop, but I don’t really understand that. That was a subculture that Reddit probably made up. I never related to that title. I used to think of myself as more indie rock, but I really have a pop writing style. I prefer guitars and the instrumentation of rock music, but it’s fluid for me.”

Working within an indie-rock framework but with the creative impulse to take on all manner of different musical flights of fancy, there’s an awful lot to pack into Claud’s tender, witty and super melodic songs. The impulse to make idiosyncratic indie rock was nurtured at an early age for Claud. “In the US there’s this thing called School of Rock which is an after school music programme,” they reminisce. “I took a trial keyboard lesson. The teacher said, ‘Your voice with the way you talk and hum along sounds a bit like Feist. Do you like Feist?’ I was 11, so I said I’ve never heard Feist before. He taught me a Feist song on the keyboard, and I thought I really want to write songs like this. I really want to make music like this. That led me down the rabbit hole of indie rock. I forced myself to write songs on a little plastic keyboard.”

Soon Claud’s tattered pink notebook was bulging with songs, and they were well on their way to following the path that would define their life. The process was beautifully simple. “The best songs that I write come out of me really quickly. If I can’t seem to figure a song out after sitting with it for a while, I get really sick of it. I usually tend to lean towards the songs that come out like vomit.”

The 13 songs collected on ‘Super Monster’ highlight just how effective Claud’s instinctive approach is. “The album feels like a collage of the past few years of my life,” they said. “My childhood and upbringing influence my art. I feel like I talked a lot more about the whirlwind of the past few years. Leaving my parents house and turning into a young adult and navigating that. Every time I share a song and people relate to it I’m like wow, I feel like the only person in the world sometimes but other people get it too and are going through the same thing.”

“I like over-romanticising my life; rom-coms were always my favourite thing in the world growing up”

The importance of being super honest and vulnerable while actually talking and writing like a relatable human being is key to Claud’s work. Their songs are never shrouded in mystery or metaphor or wilfully obscure references. Instead, they are direct and crushingly powerful emotional gut punches or doubled over in laughter expressions of joy and humour. Sometimes both within the same song. “I like to emphasise really normal stuff, “ states Claud. “There’s a song on the record called ‘Pepsi’, and there’s literally bubble sounds and a can opening. The lyric is “If I’m Pepsi you’re Coke’. We’re not the same, but people compare us all the time. I find it more interesting to write about too real stuff rather than stuff that’s more obscure.

While the songs are primarily written in an instinctive burst of inspiration, the enforced shutdown of the pandemic allowed Claud the space to finally tune and develop their musical craft to create the layered and compelling final versions. “I’ve become more of a producer,” they explain. “All I really used to know how to do was record my guitar and my vocals. I feel like I’ve reached new limits and a lot of the songs on ‘Super Monster’ came out the way they did because I got to spend so much time in my room last summer, fine-tuning my vocals and playing with vocoders and different keyboard sounds and that really expanded my writing.”

Despite not actually planning to release an album, slowly as the summer progressed Claud realised that they finally had a fully formed record in their hands. Perhaps the circumstances allowed it to truly flourish. “I realised a big part of my process is isolating myself,” they laugh.

Taking inspiration from another major part of their childhood Claud looked for ways to subvert expectations through their writing. “I like over-romanticising my life sometimes,” they said. “Rom-coms were always my favourite thing in the world growing up. I was always like, none of these people are me. I don’t relate to any of these characters. When I realised that my life was so customisable and it didn’t need to look like a rom-com, then I leaned into that.”

Comedy also plays a subtle but striking role in Claud’s music. “I have a really dry humour,” they laugh.” Sometimes I’ll write a joke in a song and send it to a friend, and he’ll be like wow that line is really honest, are you ok? And I’ll be like, no I was joking! And he thought it was this beautifully honest lyric. People always interpret my lyrics differently from what I intended. I would never tell anybody that their interpretation of my lyrics is wrong, though.”

The beauty of Claud and their music is how many people resonate with it and respond in a heartfelt and inspiring way. They tell the story of how a fan was lovingly recreating their song ‘Soft Spot’ through finger painting as well as the inspiring responses they have received from people who recognise something of themselves in Claud.  “My friend sent me a screenshot where one of her mutual friends had messaged her about my music,” they explain about a recent message. “It was a mum talking about her 8-year-old and how her 8-year-old is non-binary and has dyed hair like me and loves to watch my music videos and listen to my music because they see themselves in me. First of all, I was like, that’s amazing, parent of the year award, and that makes me so happy. I love having all-ages shows because there really are young people out there who know they’re non-binary and need to see that validation. They have a long life ahead of them and need to know that they’re not this weird person and not completely alone.”

Someone else who felt a kinship with Claud was Phoebe Bridgers, and Claud’s debut album is being released through Phoebe’s Saddest Factory record label. The importance of signing with someone who truly understands and empathised with what it’s like making music in the modern age was a key factor in Claud signing to Phoebe’s label. “She started her label a couple of years ago and reached out to me a year and a half ago. I guess she heard my music somehow and really loved it and resonated with it,” says Claud. “We had so many meetings and conversations about how the label would work, and it came together really nicely.”

Claud has always had a relentless work ethic and as well as their own album is planning on work with Shelly and even has ideas to expand into visuals. “I’ve always wanted to write a TV show,” they say excitedly. “A dramedy. Most likely it would be set in a town like I grew up in or a city I’ve been in like New York,” Whatever they come up with there’s lots more to come from Claud who is now firmly established as a compelling songwriter and artist distinctly in their own image.

Taken from the March 2021 edition of Dork, out now. Claud’s album ‘Super Monster’ is out now.