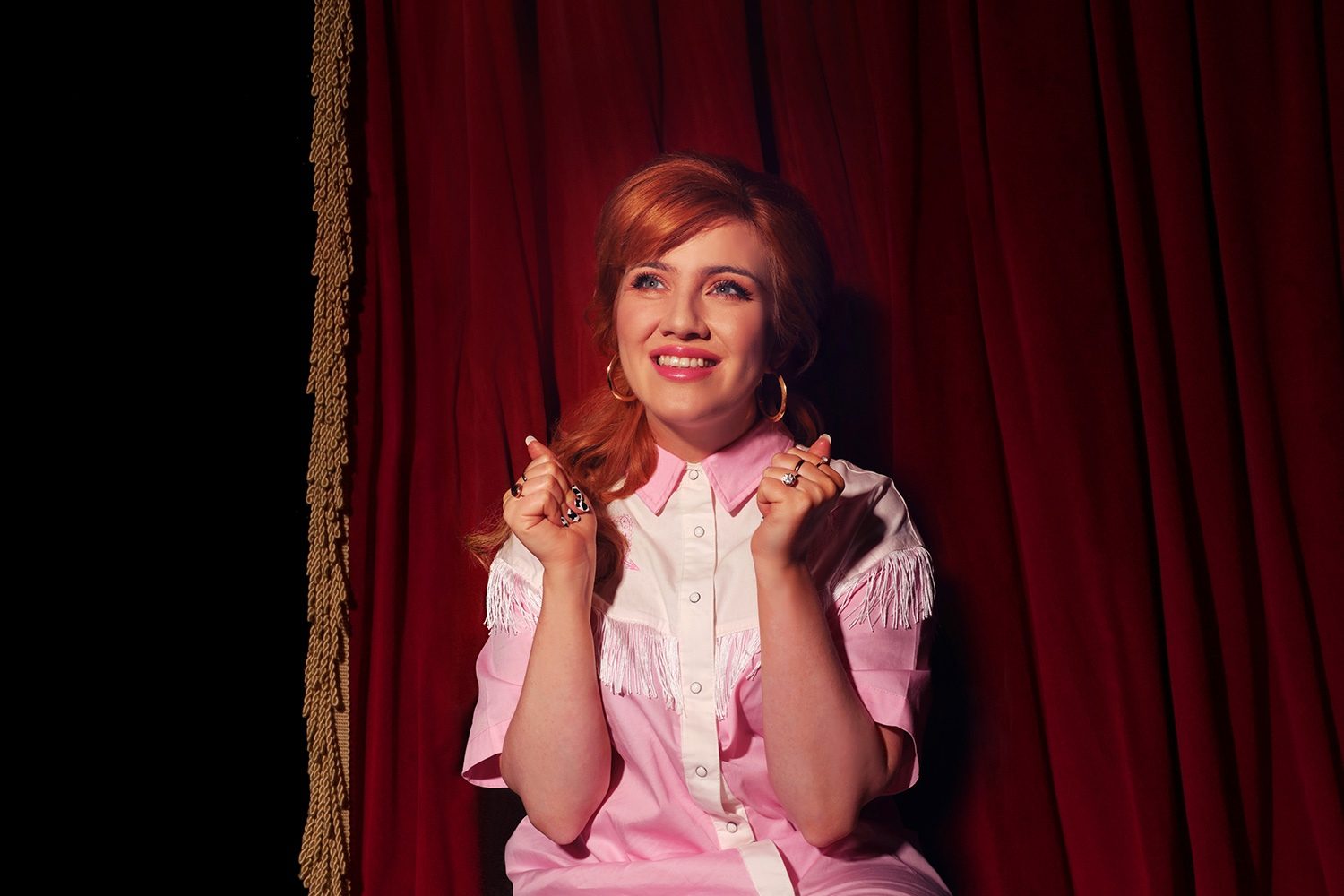 Defiantly FUN with a capital F, U and N, CMAT is a purveyor of witty pop tunes that shine a light on everyday life in unexpected ways.

CMAT stans everything. She stans everything, and she’s influenced by everything. We kick off our chat on a Thursday morning with an in-depth conversation about a Bee Gees documentary she’d watched the night before, and wasn’t impressed by.

When she’d polished off the Bee Gees documentary, she watched two hours worth of Boney M videos – another group she says are one of her favourites of all time – with her mum, and when she’s finished gushing about Boney M and late 70s Euro-disco, we’re back to the Bee Gees and how they’re probably better pop writers than The Beatles. A controversial take from CMAT, but make no mistake, she still loves the Fab Four. “I had like a three-year phase where I didn’t think or talk about anything but the Beatles,” she says. And we haven’t even gotten started on Dolly Parton.

So what kind of music does an artist whose musical obsessions range from Willie Nelson to BTS sound like? Well, she describes her latest single as “ABBA doing a country and western soundtrack”, and her other tracks so far have referenced crying in KFC, the ‘I wanna be a cowboy baby’ vine, and Rodney Dangerfield.

As bonkers as it all sounds, CMAT (real name Ciara Mary-Alice Thompson, if we’re being boring) is about as down to earth as they come, and that’s reflected in her brazenly honest songwriting and stripped-down country production.

Her journey to becoming CMAT has been a long one. Formerly of duo The Bad Sea, she had a kick up the arse from pop icon Charli XCX when she attended a songwriting-camp-cum-focus-group with her once upon a time.

“Then basically, a group of people were brought in to look at Charli’s unreleased music, and every time they would pause it and be like, ‘So what does everyone in the room think?’ Everyone else in the room was like, ‘Yeah, I love that. I think it’s great. I think it’s amazing’. Then they’d get to me, and I’d be like, ‘So I think the pre-chorus is weak, you need it to be like four bars extended on that if you want to have a bit more of a drop going in from there, I feel like the verse melody, and the chorus melody is too similar’. I was going into a level of detail nobody else was.

It’s quite the origin story, and her career has certainly flourished because of it. Since moving back to Dublin and back in with her parents, she’s launched herself as a global teen pop sensation and has been all the better for it. She notes that in a band, she struggled with sticking to a specific sound and was worried about confusing people, but moving on as a solo artist, and obviously a world-renowned, extremely famous pop star at that, the only thing that has to stay the same is CMAT.

She can focus in on her songwriting, and there’s no collaborators on the CMAT project other than producer Oli Deakin, someone she’s known since she was 19 and says she trusts with her life, so she’s free to do whatever she likes with it.

“Being a pop star is ultimately just getting to do whatever you want to do with no limitations on sound. Everything is personality-focused and is seeped in, I guess, surrealism, but also has a heart to it. If the songwriting is consistently good, and I am the person who’s at the centre of all those songs, that’s the only thing that has to stay the same. Everything else can chop and change. I can be free to play with whatever sound I want, I’m free to collaborate with as many people as I want. I don’t have to worry about egos or anything, because like, it’s all about me,” she jokes. “But also, I know that I’m really nice, I’m really sound, so I can have people collaborating on it, and I know that there won’t be any fights.”

CMAT owes everything to her creativity and access to the internet as a child. Her life growing up in Dublin was pretty bog-standard, all of her family grew up to be nurses or teachers, but CMAT had something else in mind.

“I didn’t have that many people that were super influential to me growing up because there was no music growing up. Not that there was no music at all, but I didn’t meet another person who played the guitar until I was 13 or 14 because there were so few people doing anything artistic around me. There were probably four or five CDs that I heard before I was 10. Music just wasn’t anyone’s interest except mine, and I was obsessed with it from the get-go.”

The personality-first pop sensibilities and straightforward, humorous lyricism have helped her to connect with the people who Get It, but have also left her misunderstood by those who don’t. Sometimes branded a novelty act, it’s the one thing that’s really irked CMAT so far.

“I think that it comes from a very sexist place. Because in the history of songwriting, women have often been misinterpreted as novelty. The best example is a very big hero of mine, Kirsty MacColl; for her first two albums was referred to as a novelty act, because her first single was called ‘There’s A Guy Works Down the Chip Shop Swears He’s Elvis’. Because she put the word ‘chips’ into an otherwise brilliant pop song, that is just about delusions of grandeur and lying to yourself and men who lie, everyone’s like, oh it’s novelty. But she was just using her own language.”

Still, for all the people that wilfully misinterpret her music, there’s plenty more who do get it and relate to it. Plus, she’s in it for the fun of it anyway.

When we finally get live shows back, she’s hoping to get out and play the shows she already has booked for a one-woman show that’ll be a mixture of just her and her guitar and a comedy show. “I’m really good at banter with the audience. I’m almost better at that than I am at singing. I really like picking people specifically out of the audience and then tearing them to shreds in a way that they really enjoy, and by the end of the show, knowing the names of at least 20 people in the audience that I didn’t know before I got on stage and making it an in-joke.”

It’s hard to fully describe the whole CMAT package, because there’s so much that goes into it, even by accident. But the biggest constants are her wit and directness, and you’ll find those things in every aspect of her artistry.

She explains, “The number of people where if you ask them, ‘Why are you doing music? What is your motivation to do music?’, so many people will give you some fuckin answer that’s like, ‘It’s who I am’, and they have such highfalutin answers about it. Whereas I feel like right now, if anyone was to ask me, why do I do music? I literally couldn’t tell you anything other than I think it’s fun, and it brings people together. And it’s fun. So that’s it.”

Taken from the April 2021 edition of Dork, out now. 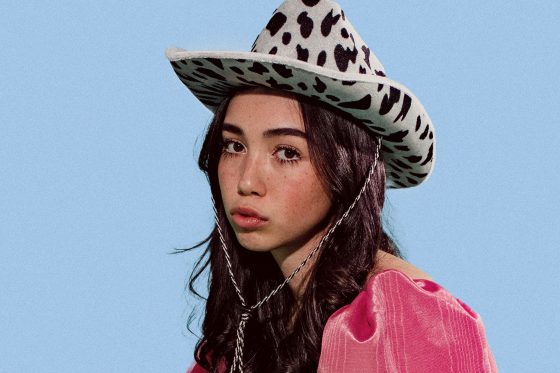 Cover your ears, Michael: newcomer Wallice is back with a biting new track