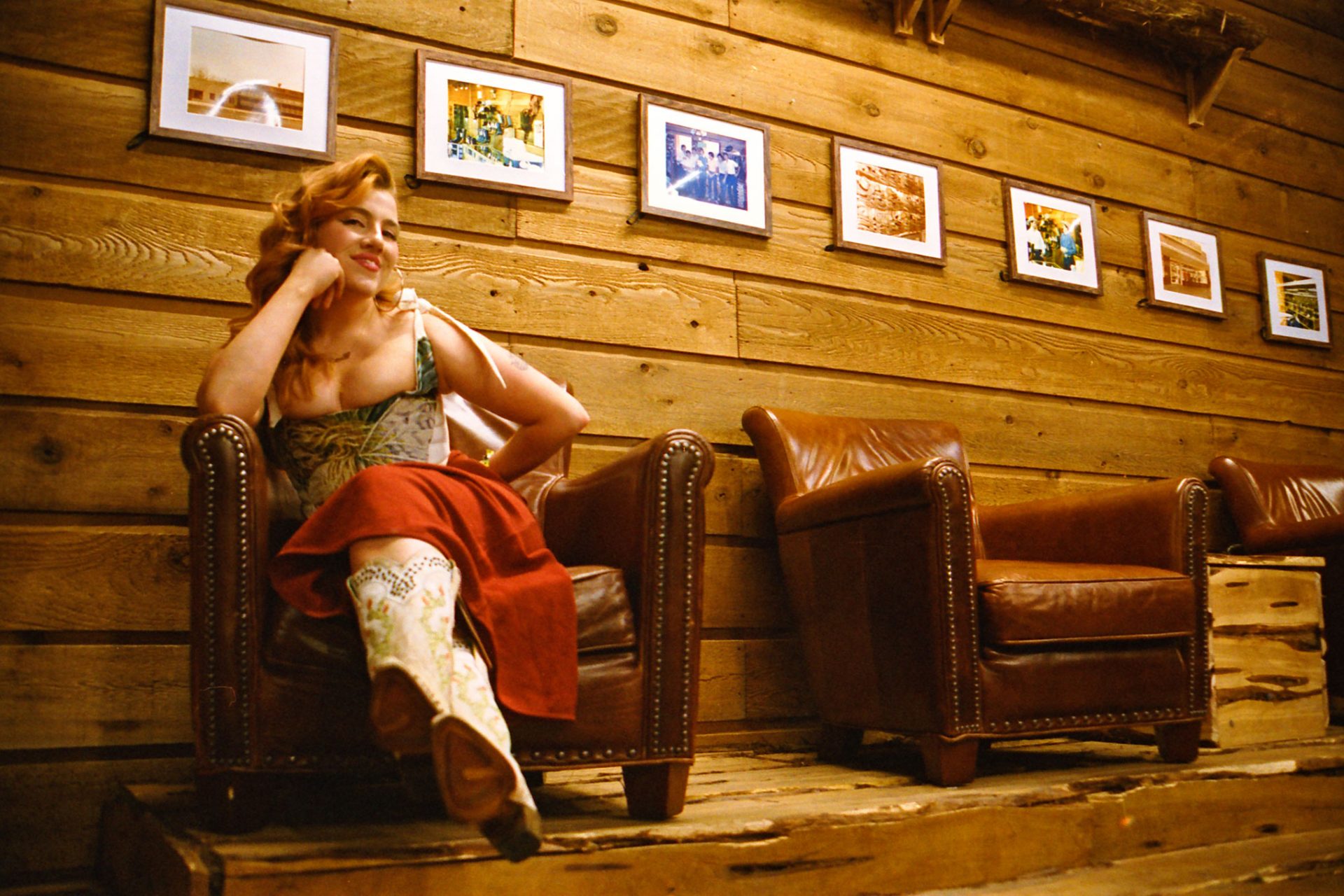 CMAT is going deluxe with a new version of debut album ‘If My Wife New I’d Be Dead’: “Obviously, I’m up to no good”

World’s Greatest Pop Star CMAT is back with a deluxe version of her outstanding debut album ‘If My Wife New I’d Be Dead’. We called her up to find out what’s going on. Chaos ensues.

Yes Dear Reader, in the pages of Dork, there is no pop star more legendary than CMAT. Now that her ace debut album ‘If My Wife New I’d Be Dead’ has been out for a few months, we give her a bell to catch up on what she’s been up to, a special new deluxe version of the album – due this Friday (1st July) – AND find out why her next album might appeal specifically to ice cream lovers.

Hey CMAT, what’s going on? How are things in the CMAT world?
Things in the CMAT world have been busy because it is now festival season, and I am doing a lot of festivals. I saw a statistic the other day that said I was the third most booked new act for European festivals. The second is Wet Leg, and the first is Yard Act. It’s important to have two syllables, it seems.

So, what’s been the best festival you’ve played so far?
Primavera, hands down. We were told there would be like twenty people there because we were the first act on stage, and we were the first people playing the entire site on the Saturday. Everybody told me that it was a good stage but a shit time. 1500 people turned up, and I met loads of them afterwards, and they were like, “We had to set our alarms!'”

It looked like a real moment from all your Insta videos?
It really was! I wasn’t expecting it. It was really lovely. Everyone came out in cowboy hats and Ireland flags and stuff. It was really sweet.

Now that the album has been out for six months, how do you feel about it with a little bit of perspective on it?
The time since it came out has been touring, touring, touring. I’ve only just got a room in a house in Brighton that is actual rented accommodation and not just me living out of a suitcase. It’s been non-stop. I made the album really quickly, and I made it without thinking about it too much, which was at times a good thing, but also, there are certain songs on the album where I’m like, oh, if only I could do this and that differently. If I had made it more slowly where I could think about what I was doing, then there are other songs I might have laboured over too much, and they would have ended up shit, like ‘Cowboy’. I don’t really have regrets. Thinking about it now, I would do things differently, but it’s out, and I still love all the songs.

If releasing the album is like giving birth to a child, it’s now crawling and beginning to walk or say a few words – how’s the album been living in the world?
Sometimes I have to hear the album in different contexts than I’ve heard it before. I went to a restaurant with my friend Ian the other day, and we were sitting down for 20 minutes, and all of a sudden, my album came on the PA because someone working there knew who I was and just put it on. I was like, thanks! Ian was like, do you want me to tell them to turn it off? And I was like, no, it’s grand – let’s just leave it on as background music. I was listening and thinking, oh wow, ‘Virgos’ really slaps.

“I wanted to redo some songs, to think about stuff and not be super rushed”

You’re doing something a little bit special and doing a deluxe version of ‘If My Wife New I’d Be Dead’. Tell us all about that, then?
The unusual thing about recording this album was that I literally just recorded the songs that were going on to the album. I didn’t record any b-sides. I kind of hate deluxe editions on Spotify that have all these songs that I don’t fucking know. I didn’t want to just put random songs on or write new songs that had nothing to do with the writing and recording of the album and just plonk them on for the sake of it. I did really want to redo some songs, though, out of the context of Covid. I wanted to think about stuff and not be super rushed and boxed in. I picked a few songs where I wanted people to hear a slightly different version.

So, you’ve re-recorded four songs in different musical styles with a country version of ‘Communion’ and ‘No More Virgos’, a rock’n’roll version of ‘Geography Teacher’, and a lovely acoustic version of ‘I Wanna Be A Cowboy, Baby!” Why did you pick those songs specifically, and what different qualities came out in them?
‘Communion’ was the main one I wanted to redo because I thought I did the shittest job of that on the album. I really love it, but it was probably the least successful song-to-production translation. It might be because I wrote it quite slow and did a fast production of it. I thought, y’know, fuck it let’s redo it and see if it comes out better; I really love the version we did.
‘Geography Teacher’, I did the opposite of what one usually does, which is usually you take a fast song and make it slooowww and emotional, like Calum Scott and ‘Dancing On My Own’. Urghh, no offence to Callum Scott, but I hate that. I hate that culture. It’s fine when I do it to my own songs. I guess Lewis Capaldi has that trance version of ‘Somebody You Love’ that plays on the radio in America. That’s alright. That’s like the opposite. That’s what I’ve done with ‘Geography Teacher’.

What about the gorgeous country version of ‘No More Virgos’?
I just wanted to do a Gillian Welch version of it because I thought it would be really funny. Just for my own entertainment. There have been some people on the internet who have criticised me for including ‘No More Virgos’ on the album because it’s such an outlier. Somebody said it was my attempt at people-pleasing. I was like, no, it was just my attempt at having fun! I wanted to do a country version so I could go, here’s your fucking sad sack Calum Scott version of ‘Virgos’, you shower of shites. Here’s your emotional man in a denim jacket playing guitar singing soulfully. Here’s your meat and two veg version. Here’s your John Lewis Christmas ad version of ‘No More Virgos’.

“I wanted to do a country version so I could go, here’s your fucking sad sack Calum Scott version of ‘Virgos’, you shower of shites”

And finally, we have maybe your signature song in ‘I Wanna Be A Cowboy, Baby!’.
Yeah, it’s my favourite song. I did an acoustic version of it before it was released for Ireland Music in 2020, and they put it on YouTube. All the comments underneath it were like, I want an acoustic version of this on Spotify. So there you go. I’ve given it to you.

What other things have you been up to then, and what might you have planned? Because if there’s one thing we know and love about CMAT, it’s that you’re always cooking up something new.
There’s nothing that I can reveal, but obviously, I’m up to no good. You know me well enough to know I’m up to no good. The one thing I can say is that if anyone is intending on going to the festival Electric Picnic, I’d recommend seeing myself over anyone else because I don’t think anyone is going to try as hard as I am. There’s a lot going on with live shows.

How much fun are you having playing about with your live show then?
Oh, I love it. I spent the last two days watching Glastonbury footage, and I’ve just been so inspired. It feels less like doing music than doing theatre. I know I’ll eventually get criticised for how gimmicky my shows are going to end up becoming, but I literally don’t care. I’ve decided that I actually just love gimmicks.

Surely CMAT will be at Glastonbury next year?
I fucking hope so! I’m not trying to be funny, but every single person I know that lives in England was at Glastonbury this year except for me. All of my band played Glastonbury with Declan McKenna! It was so funny. I was extra, extra FOMO. I want a good stage, and I have plans. I’d like to be on the telly. I love the telly.

Finally, we’re not sure if you’ve started thinking about your second album yet, but we were wondering if you could conceptualise it as a form of confectionery, what would it be?
It would be a tub of Ben & Jerry’s as it is the food item I most associate with a breakup.

What flavour?
What’s the most sad flavour of Ben & Jerry’s? Maybe the maple pecan blondie one.

What do you prefer between gnomes and scarecrows?
I’m one of those people who roots for the underdog. I think that the underdog is the scarecrow. People are scared of scarecrows supposedly. Having watched The Wizard of Oz many times, if I know anything, it’s that scarecrows are legends. Gnomes are just ceramic gremlins. It’s the fact that they’re always smiling. The minute they come alive night at the museum-style, they will tear your eyeballs out of your fucking head and use them as a badminton shuttlecock. I wouldn’t trust a gnome, but a scarecrow would have your back. Kind of an ugly bitch, has seen some shit, has been walked all over their entire life. Gnomes are just ornamental, so inherently evil. ■

CMAT’s deluxe edition of ‘If My Wife New I’d Be Dead’ is out 1st July.