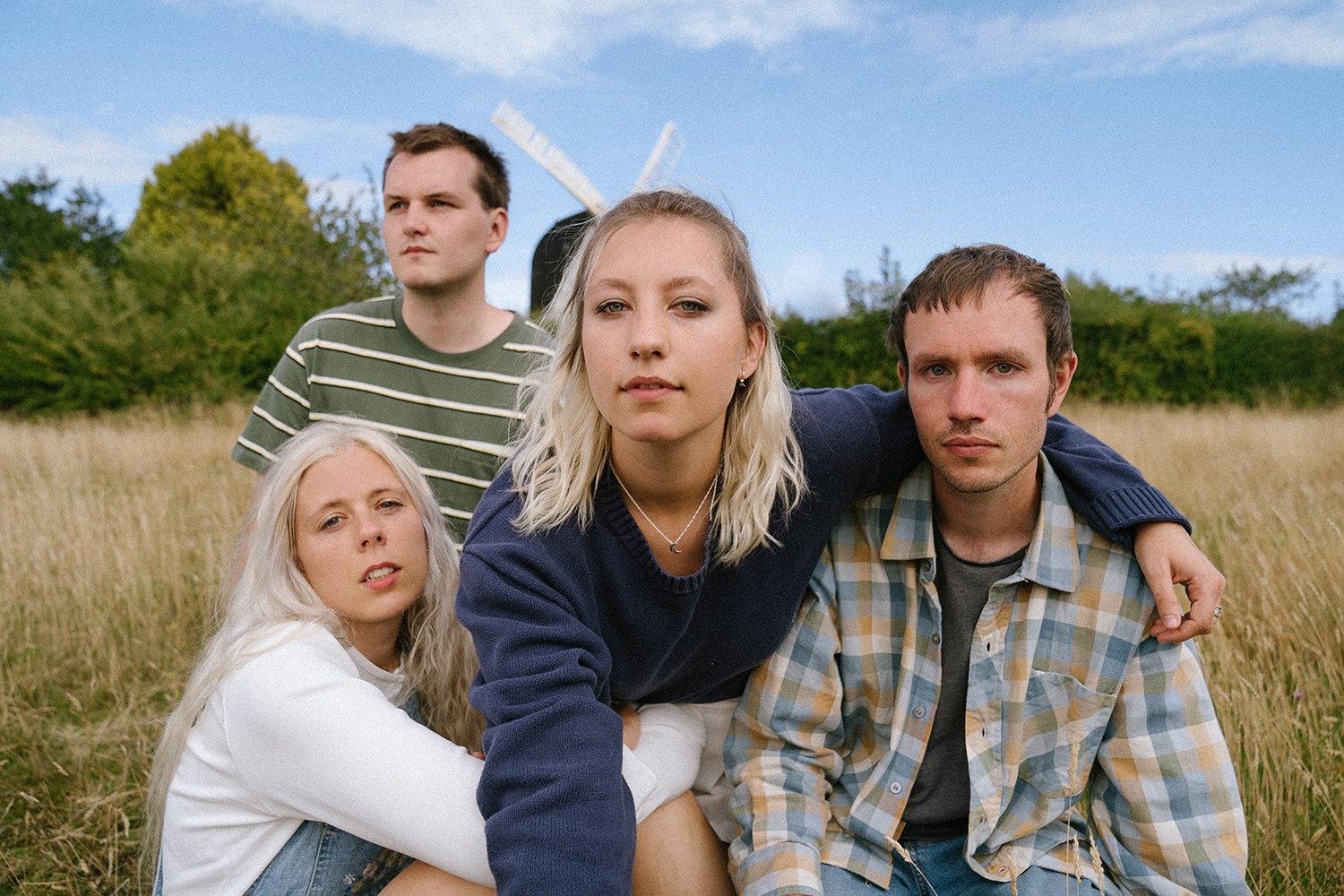 Coach Party: After the After Party

Fresh from their appearance on Dork’s 2021 Hype List, Coach Party are back with a brand new EP and a request that we help them buy their own boat. These pop stars, huh?

Dialling in after a long day working at her very own vegan café, Coach Party guitarist Steph Norris is just about ready to wind down with a cup of delicious hot chocolate. Joined by lead singer and bassist Jess Eastwood, the two give a little glimpse behind the scenes of their second EP, ‘After Party’.

Following last year’s debut EP ‘Party Food’, ‘After Party’ sees the band refine their voice and sound: dark thoughts wrapped into bright, guitar-heavy illusions. “I guess that’s kind of our style now,” Steph says. “With ‘Party Food’, it was younger lyrics because that was our age at the time we were writing them. The second EP has become more like real life and what most people go through, just singing about personal experiences. I think we’re more comfortable writing about our feelings and writing songs that people can really relate to. It’s really important to write about truths.”

Anthemic single ‘Everybody Hates Me’ paints a vivid picture of what those truths sound and feel like. To a chorus of infectious rhythms, Jess gives free rein to the shadows of her insecurity. But where does a song like that come from? How do those nasty thoughts weasel their way into the spotlight? “We wrote the chorus all together,” Jess says of the process. “We were in the studio, and it was really fun. We coined ‘Everybody Hates Me’ thinking, what could everyone hate us for? Lack of affection, that’s good! Jealous and controlling. I think everyone can relate to that, whether it’s plans, a person – anything.”

Talking about the importance of honesty in their songwriting, Steph and Jess quickly agree that getting up close and personal with their feelings and being upfront about their struggles is a priority, even if, sometimes, it might be a little intimidating. “It’s different every time,” Steph muses. “There’s some stuff that Jess will write, and it’s a bit of a release for her, and sometimes it can be difficult, but you have to overcome that. If it is personal, then that’s a good thing because that’s where songs should come from. They should be true and come from personal experiences.”

“I think there is more longevity in lyrics you can relate to on a deeper level for sure,” Jess adds. “I know that’s what I relate to with the songs I listen to. The more in-depth they are, and the deeper they go, I stick with them all the time. I think that’s what the end goal would be: for someone to put a song on at any point in their life and still have it with them 20 years later.”

“We know how to raise this child now”

‘After Party’ more so than ‘Party Food’ hones in on that vulnerability. Talking about the recording process, Jess reveals: “There were a few songs that just happened, and they sounded good. Less was better. But there were more tracks than not that were quite hard to match them instrumentally with their emotional lyric lines.”

That’s when it’s time for the band to shine. “In terms of the music side, it’s definitely more Guy and Joe,” Steph admits. “Obviously, Guy produces all of our songs as well, and he just has a vision of where he thinks it should go, and the same with Joe. More often than not, the song starts off a ballad and ends up being this like high energy screaming mosh pit kind of song. It’s really fun to watch it evolve.”

Does that ever lead to arguments? “When you’re a band, you’ve just got to be open-minded,” Jess considers. “For me, sometimes, I’ve had that feeling where I’m like… if I’ve written a song all the way through and you take it to the recording studio, and everyone wants to make changes to it, that’s been a real lesson for me to be like, we’re a band.”

Steph agrees: “It’s a compromise, isn’t it? Compromise and being completely honest. If one of us doesn’t like it, then it doesn’t happen. If it’s not a four-way agreement, it tends to not go any further than that, and we change direction. But we’re quite open with what our opinions are. When we don’t like something, we say it; when we love something, we say it; and when there’s a tie, I guess sometimes we carry on with both directions and end up seeing what’s best.”

Perhaps the best example of such a change of direction is the journey from EP1 to EP2. Moving from sun-kissed indie to raw alt-rock and switching breezy melodies for swelling urgency, Coach Party have no doubt elevated their sound. A direct result of revisiting their old one and realising, hey, that’s not us anymore.

“It’s always the case that with your first baby, you don’t really know what to do with it. You kind of learn as you go,” Steph explains. “And with this one, we were like, right, we know how to raise this child now. Let’s raise it how we want it to be raised. We knew what we wanted to sound like, so we did that. I’m really proud of it. I think it sounds amazing.”

Now that they have their feet firmly planted on the road to superstardom, Coach Party find themselves in a position where they are expected to deliver. There are deadlines now. Unfortunately, emotions don’t work to a deadline; they come and go as they please.

“I think we just hope for personal tragedy,” Jess laughs, “It’s really weird because there are obviously things that will happen, and it’s true; you can write from emotion. But it’s also… I’ve found this cool way of writing – maybe just like a title – it could be as vague as a red chair and then having the inspiration of being like, I’m going to write a whole song about a red chair. Just having that title is a good start.”

Reflecting on Jess’s lyrical prowess, Steph continues: “Jess does the majority of the writing, and it amazes me. Especially with EP two, the lyrics are so mature. Sometimes it makes me think I should check in on her, make sure she’s alright.”

But what Steph doesn’t tell you, and what Jess very helpfully throws into the conversation, is that she has recently joined the songwriter ranks herself, and quite successfully so. “It’s a beautiful song,” Jess assures.

“We just hope for personal tragedy”

“I just had one of my friends die, and I’ve never written a song in my life, but I just sat down and it just kind of came,” Steph reveals. “I picked up my guitar and was just playing and writing these words, and I was like, holy shit, I’ve written a song! I showed it to Dan, and he helped me with the chorus because I didn’t really know which direction to go in, and then it was a song. Just goes to show that when you’re in the moment, you can do it.”

As the conversation turns towards how it feels to release an EP when you can’t actually tour it, both Jess and Steph are surprisingly relaxed. “I’d say there’s always pressure with a release, but we’ve always been in a position where we haven’t really had the opportunity to go out and play many shows,” Steph explains. “I think as Coach Party, we’ve done only five, maybe four. So, in a way, we’ve always been an internet band. With the Covid situation, I guess there is a little bit more pressure, but more people are actually listening because there’s nothing else to do. They’re interacting more, and it’s really lovely to hear and see.”

“If there is any pressure, it’s internalised,” Jess adds. “We don’t have anything else to be like, oh, there’s lots of people coming. Instead of judging how many people come to your show, it’s how many people buy your record.”

On that note, here is a PSA to all of you lovely Dork readers to get online and buy the ‘After Party’ EP. If not for the music, then to fund their dreams of buying a band boat so our four islanders can come and go to the Isle of Wight as they please. Goodbye, annoying ferries; hello “Not Poor Anymore” (Jess’s brilliant name suggestion). We’re already on board.