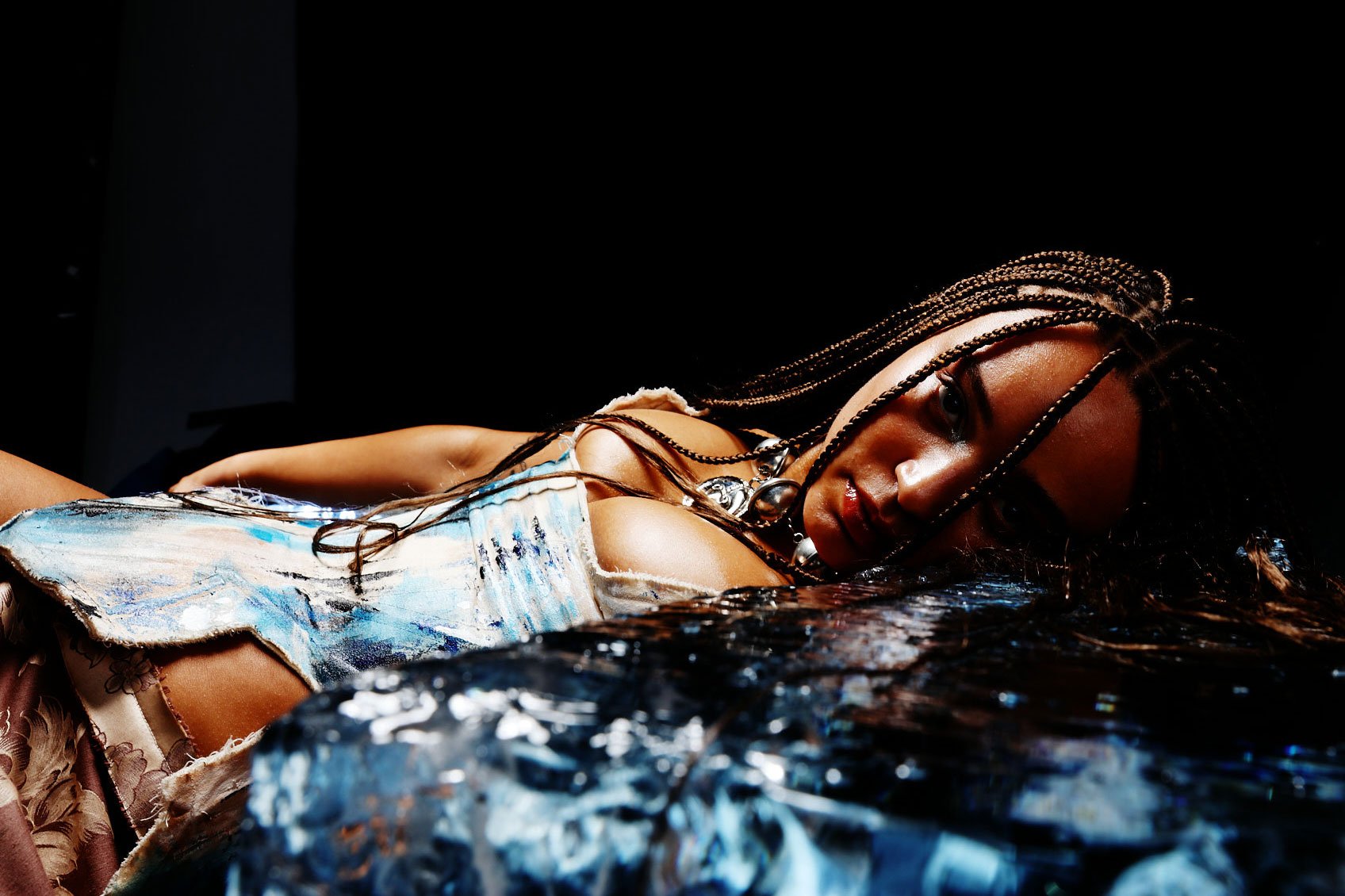 See, now it all makes sense. Yes, ‘Miss Power’ is a triumphant return from an artist whose trajectory hasn’t quite been straightforward but is now revelling in having the freedom and the confidence to just do whatever the hell they want to do, and it pays off in stunning fashion. “I feel really good,” exclaims Connie. “This is my proper baby. I love it, and I’m not afraid to say how much I love it. I’m just excited. I’m excited for people to hear it, and I’m excited for it to be alive outside of my world and my brain. It’s nice to feel excited.”

The genesis of the album can be traced back to the difficult period in the years following Connie’s debut album with a lack of support from a distant major label (“They didn’t give a shit”) plus recovering from a period of trauma coupled with general uncertainty of a career in the music industry let alone the challenges a Black woman in the industry faces. Many artists would crumble in these circumstances, but like pop legend Humpty, Connie is now thriving. Indeed, the final words heard on the album in a spoken word segment at the end of closing track ‘Red Flag’ are emblematic of her creative and personal renaissance. “This is about the first time in 3 years that I’ve felt my flow of energy back. I don’t know if it’s just a creative career, but definitely, in my field of work, it feels like sometimes you’re going up against the wall. You’re going up against the tide, and you’re swimming against the tide, and it doesn’t feel flowing,” explains Connie about the significance of that line. “You’re working so hard, and things are coming in return, but it’s just like, where is this going? Am I meant to be doing this? Doubt kicks in, and you have to try and keep your head above water. It feels sticky, and it doesn’t feel smooth. In 2020 it was like, right, I’m putting a lot of energy into something that doesn’t feel natural. It doesn’t feel like it’s flowing. With this album, it was like, I’m in it again. It’s flowing again. I’m not fighting. I’m just enjoying it, and it’s smooth and beautiful. You have to get there. You can’t avoid the fight, but when you get there, other things come into place. You’ve got to do the work to get to that nice little sunset.”

Part of the work was Connie finding herself in a musical sense as well as personal. “Musically, I’ve developed massively,” she says. “I started off when I was 18, and I just liked writing. Purely it was just about lyrics. I didn’t know what genre I wanted to do. I knew what music I didn’t listen to, but I was just trial and error and putting music out at the same time. It’s taken all this time for me to be like this is my sound. This represents me, and this feels right. My voice fits, and it clicks, and it makes sense. It took me a long time to develop my own musical knowledge of my sound and music in general. That wasn’t my goal at the start. I literally just liked poetry and writing. Now I’ve found my sound, and I know where I want it to go.”

Crucially, Connie also gained some very handy skills to help navigate the choppy waters of the industry by starting her own independent label Jump The Fence. “I’ve been through so many different processes that I’ve gained lots of business knowledge which I enjoy having. I enjoy being a boss bitch,” she laughs.

What was the key principle behind this new feeling of creative freedom? “Trusting myself and trusting my own opinion,” she says confidently. Kanye said something funny when he said, ‘it’s not that I’m not right, sometimes I’m just not right now’. It has allowed me to trust in my ideas and think if you think you can’t make it happen, well, you probably can make it happen. I’ve done it DIY; I’ve done it on a major. I’ve done it so many different ways now that I know I can do it, and don’t worry about it if it’s stressing you out.”

That liberating feeling of casting aside any self-doubt manifests itself in an album bursting with confidence and dynamics. It’s a huge step up. “I’ve learned that I’m just obsessed with making indie bangers,” laughs Connie. “I had to be told to stop. I just wanted to do more, and they were like no, we need to cut deeper on that, and I was like ok, I’ll open up my heart.”

You see, that’s where the magic of the album is. Connie’s right, there are so many indie bangers here, but when they are set against some real heartbreakers that delve deep into her psyche in an affecting and piercingly resonant way, it hits hard and stops you in your tracks. “It was about saying the stuff that needed to be said and balancing that with the freedom that I feel and the energy I feel,” explains Connie. “I never wanted my writing or even just me as a human to feel preachy. I’ve always wanted to just be the things that I hope a younger me needs. Rather than, ‘you need to be like this! This is what’s wrong with the world!’, I’d rather just try and actually be it. There are things that I needed to say. Before I wrote the album, I wanted to talk about the situation with my dad. I want to talk about what I’ve felt like as a female in this industry, but also I want to have fun because that’s how I feel right now. I want to feel like I’ve got my hands in the air with my friends. It’s very synonymous with how I’ve been feeling and the stories I wanted to tell.”

In practical terms, Connie centred the album around a typically idiosyncratic and fantastical story. “I wanted to tell a story of what a fairy might feel like if they woke up a million years later and were in our world today and what they would see and find out about,” she illustrates. “I wanted to use my experiences to write about those situations. That was the overall concept and how we structured the album. It starts off with ‘In The Beginning’, where the fairies come here. I wanted the fairy to be non-binary, so anyone could put their head on and be that person, and the next song is like woahhh, this place is sick. Like when you first come to London. I was like, oh my god, this food looks so good. Everything is so overstimulating and exciting. Everything I want to do in my life, I can do here. Then it takes a deeper turn and gets darker when obviously it’s not all glitz and glam, and then at the end, the finale is this arghhh this was so crazy, but I think it’s going to be ok.”

The record is a swirling mass of emotions and feelings. A roller coaster in the best possible way. One of the many highlights is a raging feverish out-of-control rampage of a track called ‘Kamikaze’ that highlights Connie’s anger at some of the treatment she has faced. “The only way I can express ‘Kamikaze’ is just punk,” she says. “It’s the only genre or energy that this could be in. I’m meant to be this perfect human, but I’m just not. No one is a perfect being. ‘Kamikaze’ is just pure ‘fuck you’ anger. It’s the purest form of, I’m out. I’m done. I cannot do this anymore. I cannot be pulled this way or that way. It’s a reflection, sadly, of some of the recent things. I hate talking about people passing, but in the media, people drag females left, right and centre and expect them to just get on with their day like it’s not going to affect their mental health and sadly, it does, and it can be catastrophic.”

At times it was overwhelming as Connie explored some of the darker themes and personal traumas contained on the album. “It can be hard unpicking a wound. You kind of think, no, I don’t want to talk about that, but for me, I know that I have to. I can have fun with the upbeat indie festival tunes, then it’s going to get to the point where I’m going to have to say ok, let’s unpick. There were definite tears in the making of the album.”

For all the heavy emotional moments on the album, the prevailing feeling is one of liberation and salvation. A feeling that is matched by the expansiveness of the sound. “I wanted to have some big festival moments,” says Connie. “I wanted it to feel like it was outside. We did lots of field recording in the new forest to have all of that trickling through it. It was meant to be folky but indie but pop and just with this outside magical feeling going through the whole thing.”

This is an album bursting with personality with dozens of hugely entertaining, witty and hilarious lyrical asides from an artist who goes deep with intense clarity but also does silly in a supremely engaging way. See, for example, on the instantly iconic ‘Mood Hoover’ or when she’s dragging supermarket pasta meals on the stream-of-consciousness epic ‘Yuck!’. “They need more salt and more cheese,” she says about Sainsbury’s and Tesco’s lacklustre affairs. “They’re just so dry. They used to be so banging. That used to be my go-to meal, and now they’re just not cutting it anymore.”

Having created a career-defining album tailor-made for captivating audiences on every level on the biggest stages, Connie is very much conscious of her position as an inspiring figure for people seeing a young black woman making indie music on their own terms, something Connie found in herself discovering Santigold (“She’s my queen”) and X-Ray Spex. “Every voice is important,” says Connie passionately. “It’s important that young people growing up making music can look up and think I can do whatever I want. I can make free jazz if I want to. Skin tone and my upbringing will not dictate the music that I make.” Perhaps when she takes ‘Miss Power’ out on tour and brings it to life on stage both on her own shows next year and supporting Yard Act, there will be a whole new generation inspired to follow their own path. “That’s the dream, that’s the goal. To take over the world with more Connie Constances,” she laughs. ■

Taken from the November 2022 edition of Dork. Connie Constance’s album ‘Miss Power’ is out 4th November.