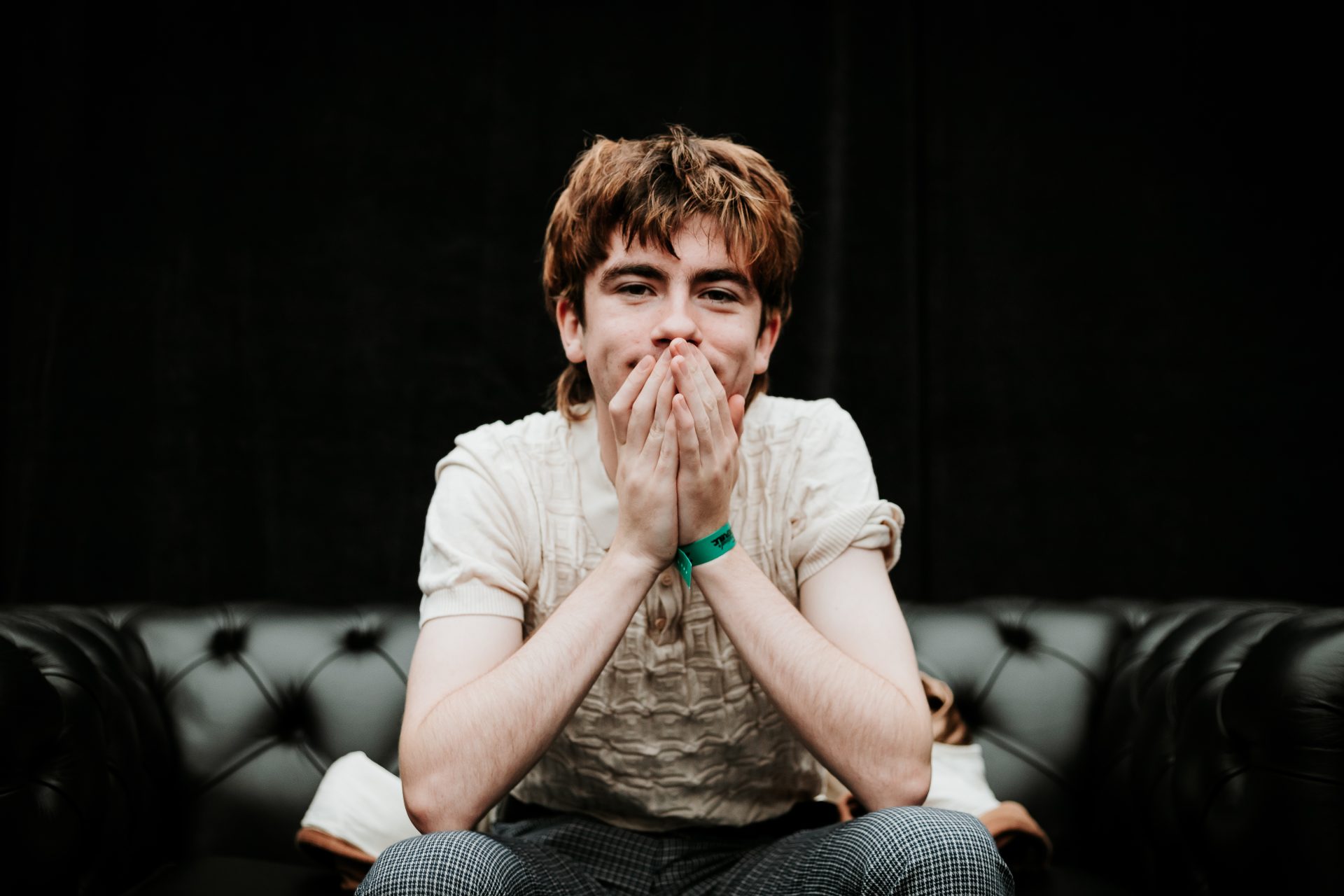 With new material and loads of upcoming shows, Declan McKenna is back in business.

Following the release of his epic space-rock masterpiece ‘Zeros’ in late 2020, indie icon Declan McKenna is ready and raring to go backstage at Latitude. After 18 months of feeling somewhat stuck in the water, he is finally able to debut the new material to a physically present crowd.

“It feels good to be here; playing live again has felt a long time coming,” he sighs with relief. “I fell asleep on the bus last night and woke up here – I just stepped out the door and straight into a festival.”

A well-stocked dressing room fridge indicates some nerves may be kicking around his mind, too? “I’m trying to stay relaxed because I don’t want to ruin it for myself,” he answers. “The more you build them up in your head… well, you’ve just got to take them as they come.”

While the light at the end of the tunnel seems to have finally arrived, we’ve all learnt to adapt recently, and so taking these opportunities as they come has become vital for music fans in 2021 – a time when a phone notification can cause huge cancellations. This means Declan is fixated on nailing this set, his first chance to wow a crowd with fresh and exciting material, although he’s not entirely certain how it’s going to play out or which new songs will connect.

“It’s hard to say; I think today will give us some idea. It’s been hard to pick a setlist because we have little live experience with these new songs to go off,” he admits. “It takes time to find those unexpected moments that everyone sings along to and everyone jumps on board with in a way that I can’t appreciate yet; those moments tend to shine through fairly quickly.”

There are certainly plenty of moments for fans to jump on board with after memorising lyrics at home – the epic scope of ‘Be An Astronaut’, the chaos of ‘Rapture’, or perhaps the tension within ‘The Key to Life on Earth’ all seem very well suited for a set as cathartic as this. However, an even more current release has presented itself with the naturally chaotic sprawl of new single ‘My House’, an early isolation bop that has just dropped alongside an ambitious visual accompaniment.

The track’s low-key flow is a deliberate contrast to the grandiose aura of his recent record, as he earnestly explains. “I wanted something more instantaneous. A lot of what you hear on this song is the first time I came up with it. It’s got out-of-tune guitars and is a generally bit off-kilter, but I really like to hear that rawness in music. Embracing that side of writing was integral to my music for a long time, just working with whatever I could use to make a song. Coming back to that approach after ‘Zeros’ felt really nice.”

‘My House’ feels like another fast reinvention for Declan, an artist who loves to express his fondness for musicians who reinvent themselves constantly, like David Bowie – a trait he’s adopted himself. “I just like to reject my previous work! I got into a grand space-rock energy for a long time, then while I was stuck at home, I wanted to embrace this new energy instead. I actually felt a lot more comfortable championing my own production by creating through circumstance like that too.”

The glam-rock icon has had a more literal influence on the young artist’s mindset moving forward, with a newfound perspective directly informed by a specific quote. “If we’re talking about Bowie, he said that your feet have to be just barely touching the ground for you to make something interesting; that’s so true,” Declan remarks. “I have to not know what I’m doing for the work to be interesting. We all need to be more like a child: be more curious, stop worrying about what people think. Just get out there and ask questions, don’t be afraid of yourself and what you actually want.”

This creative freedom is something that you can expect to translate to these exciting live shows also as epic scale is filtered through a sieve of raw expression that doesn’t try to overthink itself too much. “To some degree, I’m always expressing something important instantaneously. That’s what I’m now embracing with music, shows, videos… everything,” he confirms.

Speaking of live shows, if a slew of summer festivals isn’t enough for you to get your Declan fix, then you’ll be glad to hear of an extensive UK headline tour coming up in September. It’s one where you can not only catch the main man himself, but also some of his favourite rising stars including Wet Leg, CMAT, Alfie Templeman and Georgia.

“I can’t imagine starting out and not being able to get out there and engage with people, finally have that shared music experienced – that was so important for me, I toured religiously for years when I first started,” Declan reflects. “Now that I’m in a position to put on bands that I really want to support, I picked people that I’ve been following and am really excited about. It’s been a weird time for me to figure out what to do with myself, so I’m buzzing for these guys to get out there with me.”