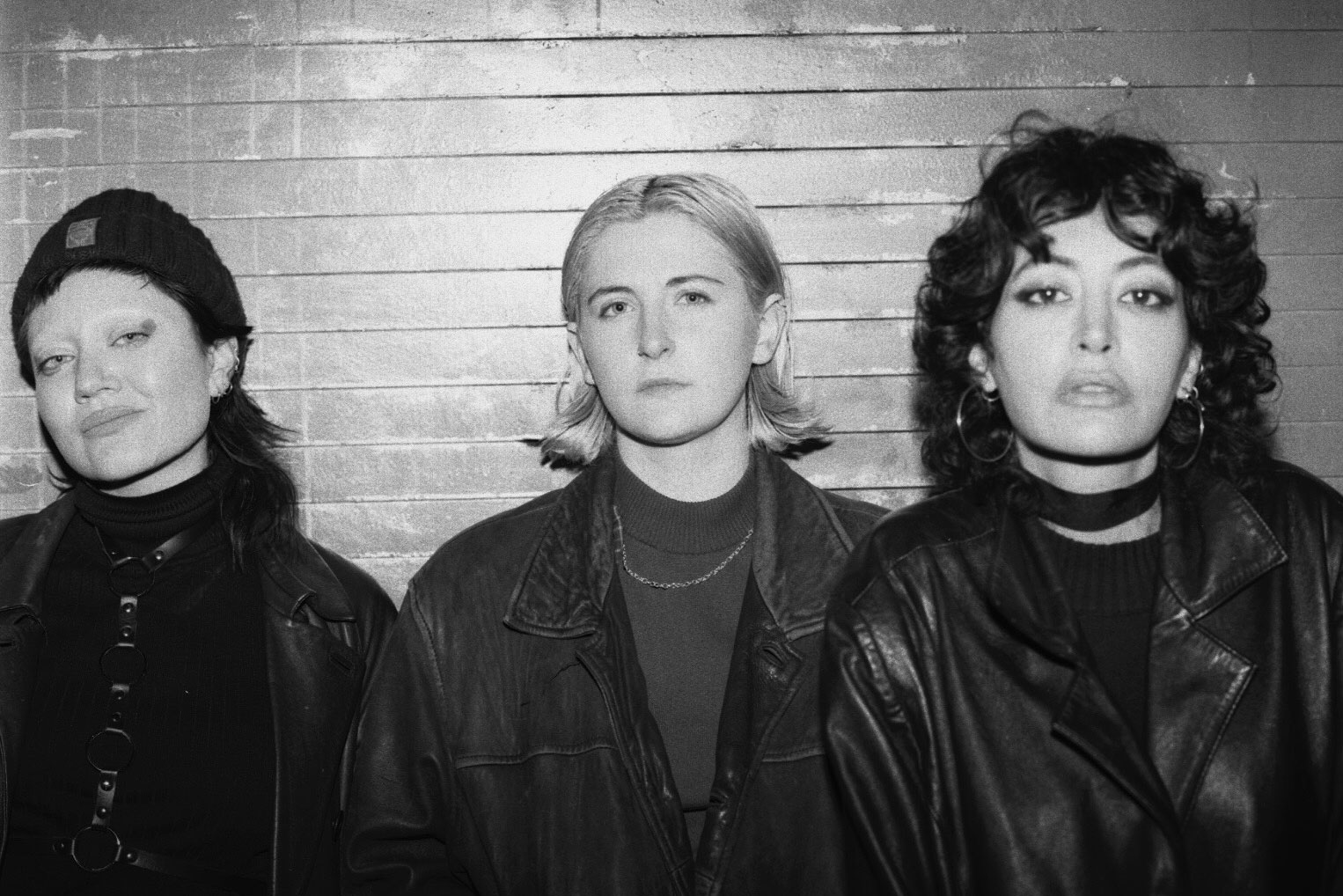 deep tan: “Respect to the underdogs”

Imagine throwing Joy Division’s new wave gloominess into a mixer with The Slits’ exuberating badass energy and the weirdness of Warmduscher: here comes deep tan. Hailing from East London’s underground, this gritty band with a sassy sense of humour has arrived to break through a post-lockdown world. Not afraid to comment on current events – from claiming a pro-sex work stance, to praising our right to party – that (un)holy and unapologetic trio plays on musical contrasts and refuses to bend down to any genre. They would rather come up with their own. So, it’s no surprise when Wafah, Celeste and Lucy, almost synchronically crack open cold cans of beer, bringing pub vibes to Dork’s Zoom video chat.

deep tan came into existence when Wafah went to Female Trouble, a monthly lesbian club night hosted by Celeste at Dalston Superstore, where they also scouted Lucy. With such a badass crew, their name had to live up to their sonic potential for all that’s weird and fun. “I went into Boots and I saw a tube that said ‘deep tan’, and I thought, that’s interesting,” says Wafah. Having decided on that, they went on a journey of creating their distinctive stripped-back, minimalistic noise.

“There were a few sessions where we came up with some songs that were a bit more atmospheric than the stuff we do now,” says Celeste on their first get-together. “When the band started to play live together, we realised that the stuff we enjoyed playing the most was the darker and more driving sounds.”

From the rhythmic and drum-driven groove of ‘Constant Inconsistencies’ to more melodic bops like ‘Air’ or ‘Shimmer’, deep tan shift somewhere in the post-punk/new wave direction, covering the grey areas in between with straight-forward and mantra-like lyrics. “We’re just going with the flow and see what we’re feeling in the moment,” Wafah explains. “I’m not sure if we’re thinking too much about what genre it is. Just trying to make something we feel works sonically. What fits together, not really confiding ourselves into something too square. We like exploring and seeing. It’s all gonna even evolve, so I don’t think it’s about sticking to one thing.”

As the effect of their compositive free-roaming, a trend emerged anyway, Celeste notices: “One thing that’s a constant in all the stuff that we do, is that we’re always looking for some kind of contrast. Even in more atmospheric stuff, even though we’re a bit gentler.”

That’s how their newest single ‘camelot’ was born. Inspired by one of the jam sessions and the growing need for a proper night out, bred in the quiet desperation of the society that demands, and deserves, letting out the steam of the pandemic isolation and drowning sorrows in endless drinks. “When we were talking about what it could be about, there was this feeling that there was something that needed to be quite urgent. ‘Pour one and drink another one, drink one down and pour another one’, that just popped into my head because we’d been working on another song previously that was going to be a drinking song, and it wasn’t really coming together. We thought, maybe this could be a drinking song?” Celeste explains, among Wafah’s laughs.

Besides coming up with an ode to the sesh, deep tan spent last year in the studio, working on debut EP and taking a dive into the world of German psych with NEU! and Cluster as guideposts. “Over Christmas, we were watching quite a few documentaries on krautrock,” Celeste shares. “When we’re talking about German experiments, we’re getting on krautrock, but also, we feel like the name krautrock is not the right name for the genre. Essentially as a name, it was coined by English journalists who were kind of offensive to Germans by calling it krautrock.”

deep tan recognise the power of definitions and double meanings, so the name of the EP had to reflect that and encapsulate their ideological stance. “The name of the EP is ‘creeping speedwells’, which is a weed that grows under tough conditions,” says Wafah. Not that kind of weed. Lucy sets it straight, renouncing any drug connotations: “We were gonna post ‘it’s about weed’ and then got really worried that people would think it’s about smoking up or something.”

If anything, ‘creeping speedwells’ is a celebration of our communal strength that deep tan managed to capture and crystalise into four tracks. “The EP was written in 2020, which was a very tough year for most people, if not everyone,” says Celeste. “It’s a year where we grew newfound respect for the resilience of weeds that can thrive in tough conditions. It’s a little subtle nod to that, to a humble garden weed. They are a type of flower, but a lot of gardeners would say that they are garden pests. Respect to the underdogs. Respect to the garden weeds.”

Missing day-drinking sessions at their favourite venues and mingling with other creatives, deep tan, as probably anyone in Britain right now, look forward to that mystical date of 21st June and foresee a sesh-apocalypse. “It’s gonna be a mess. Everyone’s gonna take work off for a week. It’s gonna be the busiest Monday ever!” says Wafah. “I’m gonna be in a corner like waking up at 2pm from the party a few days ago.”

Celeste predicts an even wilder scenario for her bandmate. “Wafah was also saying she might not even end up in this country and might wake up in Paris or something. I will be disappointed if you wake up in London.”

It doesn’t matter where you end up, but who with. If you get lucky enough to spot a deep tan member in your local pub or on a French cruiser, make sure to get them a drink or two. If not, pour yourself some more, put past pains behind and enjoy the world that’s baby-stepping back into normality. “We’re all owed a million pints by the universe,” laughs Celeste. Cheers to that.

Taken from the June 2021 edition of Dork, out now. deep tan’s debut EP ‘creeping speedwells’ is out 4th June.