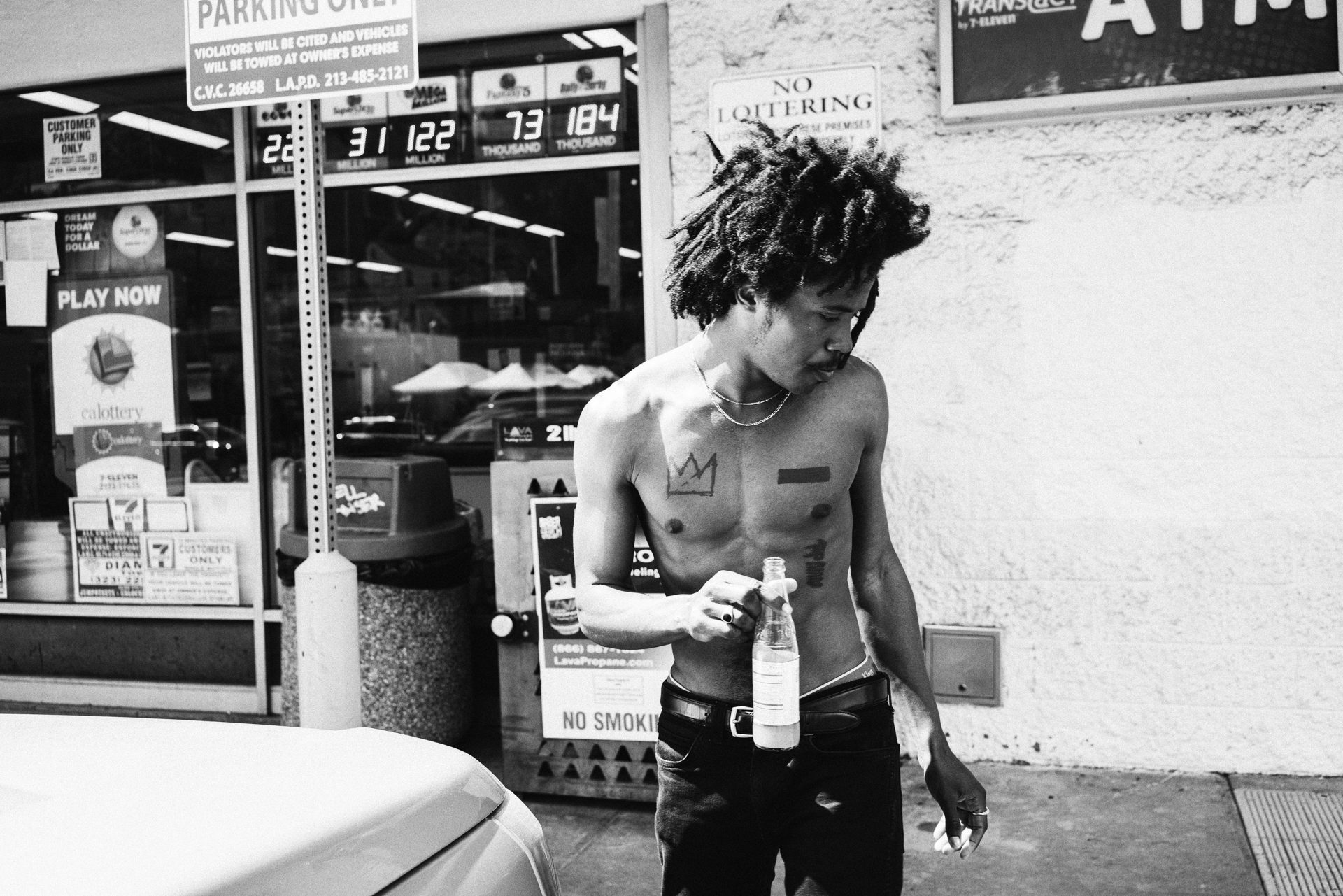 Have you met De’Wayne yet? Everyone’s favourite new punk has just dropped his debut album, and it’s Really Very Good.

Eleven tracks. That’s all burgeoning alt-pop sensation DE’WAYNE needed to construct his debut album. Not forty or thirty. Nope. He had the vision in his head – the lust for life – and knew what his big tasty statement into the world was going to sound like.

You see, it’s because DE’WAYNE – that’s De’Wayne Jackson, to you – exudes ambition. It goes without saying, but he is someone born to be a star. Finding himself entrenched in the rock world, that surly beast which has morphed into something gregariously favourable to things that bounce and beat as opposed to just crunching riffs, DE’WAYNE’s is a sound that wants to take over the world. Truthfully, there’s no one more likely to achieve it, and what better way than embracing that lusty beast called pop.

The key fact of DE’WAYNE’s sound is that it never touches upon one of its trifecta components more than the other. Much like a Twix, each segment plays an equally integral role; from the tough crunch of the rock biscuit, the glueing caramel of rap energy and that sweet chocolatey pop payoff, it’s enough to make you chow down on both fingers at once.

Admitting that he wants to hit the very top certainly suits pop music’s embracing of being The Best, an incomparable thought next to rock’s steadfast need to be hidden beneath the dirt with all the bugs and creepy crawlies. On this, DE’WAYNE exclaims: “If artists are working hard, like, let them eat!” Having survived his period of living on the bread line while chasing his dream after moving to LA from his native Houston, he’s now pinging down his goals like battered metal cowboys at a fairground stall.

“Yo, and I’m glad you brought that up,” a fire burning in his eyes as he analyses the state of the alt world. “It’s like in rock music, it’s not cool to want things, and it’s not cool to say that you want these things, but I grew up with absolutely nothing but the church, you know what I’m saying?”

His upbringing was similar to that of many Black Americans in that it revolved around the church. Of course, DE’WAYNE morphing into the stylistically confident, faux-fur wearing, singular red lock of hair sporting icon counters all of this, which he continues to touch upon. “The church teaches Black people that you don’t even get it in this lifetime; you get it in the next life… I don’t even know what the hell that means now as a 25-year-old.” His voice piquing, ever-smiling. “I want it now, man, and I’m gonna work my ass off for it.” He also notes that it’s “something that rap embraces, which is, you know, a part of me regardless, so it’s like, yeah man, let’s have fun, and have a good time.”

Indeed, there’s nothing but good times on the horizon, but equally as notable as his ambition is the fact that DE’WAYNE doesn’t want to be pigeonholed as a political artist. Sure, his bold debut single for Hopeless Records, ‘National Anthem’, implies a political eye, but DE’WAYNE is a man of many layers who’s interested in one thing, and one thing only – making good pop music.

“When we put out ‘National Anthem’, people were starting to understand and be like ‘Oh, okay, he’s gonna be like a political artist’, and they dug it. But [being able to put] out songs like ‘Perfume’, ‘I Know Something’ and ‘Walking To Work’ and be like, ‘No, I’m just here to make good pop music, and to make good songs that just say what I am’… and to have people still dig it and not try to box me in it feels really satisfying. That’s where I’m at right now.”

Where he’s at, more specifically, is new album ‘Stains’. That statement piece bringing together his deadly coalition of rock, pop and rap, which doesn’t as much threaten to make DE’WAYNE a star as it promises. Starting with the pounding-like-a-biblical-march-to-the-ends-of-the-earth ‘National Anthem’, and ending with the frenzied fury of ‘Me Vs You’, no prisoners are being taken on this pop-rap-rock odyssey.

“I feel like I’m closer to where I want to be bro, so I’m really excited, and I just want to compete,” he enthuses, and the results speak for themselves. There’s the rampaging ‘I Know Something’, even a tender side makes an appearance on ‘The Jungle’, and they all feature a little slice of DE’WAYNE. Love, bravado, ambition, sociopolitical nods – you’re hard-pressed to find something *not* included on ‘Stains’.

“This is like a sexy ass ‘I Wanna Be Your Dog’, but like a pop song,” he says, comparing ‘Super 8’ to the Iggy & The Stooges punk classic. A bold statement if ever there were one, but DE’WAYNE carries the conviction to pull it off. It would be amiss to say the most pivotal part of DE’WAYNE is the attitude he’s lifting straight from the pages of a rock ‘n’ roll handbook, but that’s what’s drawn a crowd in, and truthfully, it’s just DE’WAYNE being himself.

“I want to be a stain on culture!”

As for where that attitude comes from, he notes: “I don’t want to say I’m angry,” which is a fair point. There’s no one nicer than De’Wayne Jackson in this world, but DE’WAYNE-the-artist is someone who has something he wants, nay, needs to say.

“I just have this chip on my shoulder,” he states. “I want to be here for a long time and be a great songwriter, so I think that attitude just comes from that and coming from being a poor kid. Balancing those two things and being like, fuck, I came from nothing, but now that I’m here, I want to stay and be great at what I’m doing, you know? I don’t want to just be playing around.” Also explaining that he’s “tryna be like Iggy Pop,” who he feels “would get on stage and just burst out with this confidence and with this energy that you can’t hold down. I really try to embrace that type of energy.”

The cover of ‘Stains’ – a word in itself that is proof enough of DE’WAYNE’s plan: “I want to be a stain on culture!” – features the man himself in his finest rock garb, but completely spotless. This is someone who’s “been through the mud” yet looks cleaner than your mum’s washing. He’s untouchable.

This all lends itself to wanting to be on top. When you’ve not only come from nothing but also seen a space that is yearning to be filled and not only *that* but being underrepresented in the alt world, means DE’WAYNE is stopping for no one: “We’ve been underground my whole life, right?” he notes on this point. Finally getting signed meant he was also able to actually eat, which is kind of important, along with the world finally getting to meet DE’WAYNE.

Along the way, he’s picked up some mates in the form of Good Charlotte’s Madden brothers, dreamy Aussie alt-poppers Chase Atlantic (who he partnered with for earlier single ‘Adios’), and of course Waterparks who DE’WAYNE supported on our UK shores a couple of years ago.

Additionally, not only featuring on the sniping ‘Perfume’, fellow Houstonian Awsten Waterparks has also been a key player in DE’WAYNES’s journey from scrappy ‘HERE I AM!’ support act to a fully-fledged kingpin of his own fan club, The Circle – more on that later.

“I think he saw it in me early cuz I was still working, and he would take me out, and I wouldn’t have any money,” he says. “And he’d be like, ‘I got it, like don’t worry about it’. I would be so embarrassed, but I think he just saw it in me, and I appreciate it so much.”

Awsten taking a chance on DE’WAYNE is where his luck changed. Taking him out on the road “when even my friends and artists would not,” which he puts down to he and his band being “a bit too aggressive, and a bit too much of an ‘opening act’ to tour with some of these guys who don’t look like me.” Reader, that would be because DE’WAYNE’s energy – palpable enough through a Zoom chat to give you Redbull wings – on stage is magnified times a thousand.

Help from other alt-pop-rock-what-have-you icons aside, it’s also that fanbase that’s giving the DE’WAYNE train the runaway treatment. When initially Dork asks, since all great pop acts have their clubs, what DE’WAYNE’s would be, well, we’re put in our place very swiftly.

“The Circle, man! People got tattoos! They’re starting to grow, and it freaks me the fuck out,” as he exclaims these words, he shows the two words inked on his arm.

After clocking Twenty One Pilots and their Clique, both the literal hunger and that for the spotlight got DE’WAYNE to thinking, if he could develop his own base for those that see things how he sees them, and a place for them all to identify, well everything will be alright. “Yeah, it freaks me out bro, cuz I remember putting on my Instagram in like 2019, being like, ‘this has just started… The Circle’ – and now kids have it in their bios. They have tattoos; we have a whole Discord.”

Since it would seem that things are certainly falling into place for DE’WAYNE, how does he go about knowing where to keep this ambition honed? It’s one thing wanting to make some waves, but when you’re erring toward a veritable typhoon, especially after the liftoff success coming off the back of his recent string of singles, how do you keep that blood pumping? You just keep going, apparently. “I still gotta dig for shit!” he exclaims.

“I want to compete at the highest level, bro, and I know I got a ways to go, but if you get into the music and you hear what I’m doing – I don’t know, I think I’m gonna be here, and I think I’m gonna keep pushing the boundaries,” he sits chewing on these ideas for a moment. “So, if those moments keep happening out of love or out of hard work, whatever the universe is allowing me to push through right now, I’m here for it, and I’m trying to put myself in a position to be, you know? So it’s beautiful.”