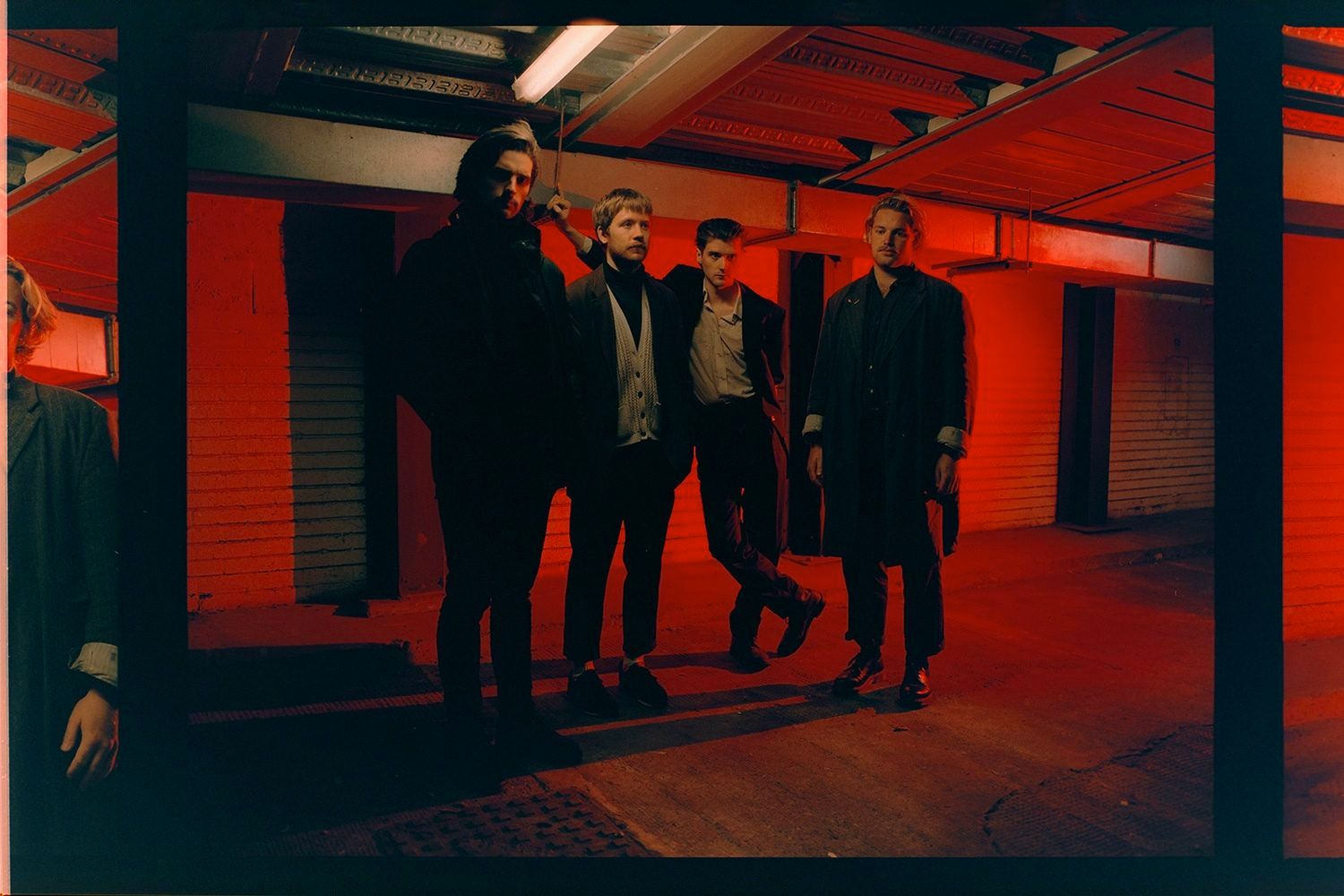 Do Nothing: “A lot of stuff we do lyrically comes from having watched stupid amounts of dumb shit on the internet”

Nottingham upstarts Do Nothing are back with a new EP that’s honestly a touch too relatable for our liking, what with it being billed as “about the inevitable feeling of being thrown onto a big pile of your own rubbish” and all.

“There’s something weird going on out there,” remarks Do Nothing’s Chris Bailey on ‘Glueland’, the title-track from the Nottingham bunch’s second EP. It’s a prophecy he fulfils himself over the following five songs as he cracks open the door to a squelchy, sticky world populated by eels and lizards, swordfish, and someone called ‘Screaming Blue Bill’, as its eerie soundtrack builds on the promising post-punk this outfit are already dab hands at.

‘Glueland’ arrives almost exactly a year after Chris et al’s acerbic debut ‘Zero Dollar Bill’, which cemented their burgeoning rep for making clamorous alt-rock with Chris’ vocals the focus, near-shouted as though from some half-smart sceptic down the pub. That EP swaggered with a looseness that comes from road-testing, from giving the songs room to flex and grow organically in front of audiences, where they ultimately belong.

‘Glueland’, as you might have guessed, wasn’t afforded that luxury. Conceived and recorded since the first Covid lockdown, this EP found Chris “making the songs as songs”, holed up in a basement home studio, a long way from gigging in every sense. Finding the motivation to create wasn’t always easy, he says. “Getting into a good head-space is hard because it’s not exactly the vibiest time. There’s not an overflowing well of inspiration in my world at the minute. You just do the best you can!”

The result of Chris’ cocooned approach is a pivot away from the sparseness of previous efforts towards a fuller, more experimental sound. On the agitated single ‘Uber Alles’, the group incorporate dance beats, a direct consequence of not being allowed together in the same room. “That comes from [me] sitting at home sampling everything rather than recording actual drums,” he explains. “If you’re sitting there playing about like a kid, it’s easy to come up with these kinds of beats that you wouldn’t necessarily ask your drummer to play. But then, in this situation, I can do that and then get Andy [Harrison] to interpret them, which is really fun.”

Do Nothing’s not-so-secret weapon is Chris’ penchant for eclectic and often hilarious lyrics that reference anything and everything that takes his fancy. From ‘Zero Dollar Bill’, ‘LeBron James’ cites Fyre Festival villain Billy McFarland and The Simpsons’ Lionel Hutz to tackle the theme of fraudsters in society. Take the track at face value, and you might not grasp the common theme; once those plot points are highlighted, it’s hard not to see. “I don’t like nailing down interpretations too solidly because the idea is for [the words] to nudge you in a certain direction, to leave enough room for you to see yourself and relate to it,” he muses.

The words on this EP are brilliantly obscure, a testament to Chris’ magpie eye for inspiration in the unlikeliest of places. “You know, they used to make glue out of horses?” he chirps out of nowhere, of the title-track’s origins (he drops a couple of bewildering non-sequiturs throughout our conversation). “I always thought it was hilarious how dark that is to tell a child. It’s horses, and they, like, melt them down. [The song is] laughing about the idea of becoming obsolete.” Equally, he continues, it’s a take on the ever-revolving nature of digital culture in which “things get chewed up and spat out very quickly, news cycles go fucking like that” – he snaps his fingers. “It’s about being at the end of that cycle. The idea of being thrown on the pile.”

Closing the EP, ‘The Great White Way’ is one of the group’s finer efforts, a slow-burner punctuated by guitarist Kasper Sandstrom’s sparky riffs. As well as being the oldest song on the record (“we’ve had it since we were in previous bands… it used to be slower, now it’s a funky boy”), it’s also one of the hardest to pin down a meaning for. Fortunately, Chris indulges.

“It’s what they used to call Broadway [and] it’s an art thing by William Pope.L. He’s a performance artist who did this thing called The Great White Way, where he wore a Superman suit and crawled down the whole of Broadway in shifts. It took him like five years. He’d try and make it as agonising as possible; he had a skateboard to roll over the streets, so he didn’t get run over by a car. He’s a black artist, and it was a sort of commentary – I won’t go as far as to try and actually say what it means, but it’s clearly symbolic. I thought there’s lots of ammunition in there to write a song about.”

Is a short attention span the reason Chris is informed by such a broad range of sources? “That’s a good question. I don’t think so, because writing-wise I can spend hours staring at a screen and I don’t get distracted. I think I have a relatively large attention span in that I get obsessed with stupid things for a long time. Like, I’ll re-watch interviews again and again, or I’ll decide that I fucking love snooker, watch that for ages and then give it up. It’s a thing that everybody does; you just throw stuff away.”

“A lot of stuff we do lyrically comes from having watched stupid amounts of dumb shit on the internet. It’s because I can’t go to sleep without watching fucking magic or people making microwaves… the stupidest things. It’s amazing that you don’t have to work hard to find all this crazy stuff. There’s just clips of everything that you can dip your toes into.”

Conversationally, Chris is as much a musician as he is a comedian, deadpan and exclusively self-deprecating, especially when the topic of ‘album?’ rolls around. You’d expect the next move from these up-and-comers to be a long-player, but with the presence of Covid still lingering, logistics are tricky. For Chris, though, the pressures are more internal.

“For a long time, I was really scared of doing an album. It’s like, ‘once you’ve done it, you can’t do it again, it’s gotta be good, ah!’ I would hate to do a bad one, and I will, I know I fucking will, it’ll be a shocker!” he laughs. “But I’d love to do a good one, you know? It’s a head fuck for me, because I massively over-think things. A lot of bands, their first album is like ‘this is what we are, here’s us as an album’. But I want ours to be a statement in itself, rather than just be a representation of our early years.”

“At the moment, I’m just trying to write a lot and not limit myself, because it’s so easy if you’re a bit of a psycho to do something and then be like ‘turn it off, I hate it’ without giving it a chance. I think that’s the way the people who do ‘the amazing stuff’ always do it. They just do the thing that they really care about. I think people forget that it’s hard to have the balls to do that! I don’t think – yet – I’ve had the balls.”

Like most artists who have put out records in the last year, his main plan for 2021 is to get back out and perform again, and witness the success Do Nothing have gradually been accruing in a real, tangible setting.

“[Being in a band] is the only thing I’m really bothered about, so for it to not just be a complete failure is super nice, but because there are no gigs, it’s hard to gauge. When you’re sitting at home watching telly, it doesn’t feel like it’s going well. You feel like a loser! So it would be nice to start playing gigs again and see and feel that people actually like the stuff we do. To do it for them, in the same room, that’s the nicest thing.”

Taken from the April 2021 edition of Dork, out now. Do Nothing’s EP ‘Glueland’ is out now.