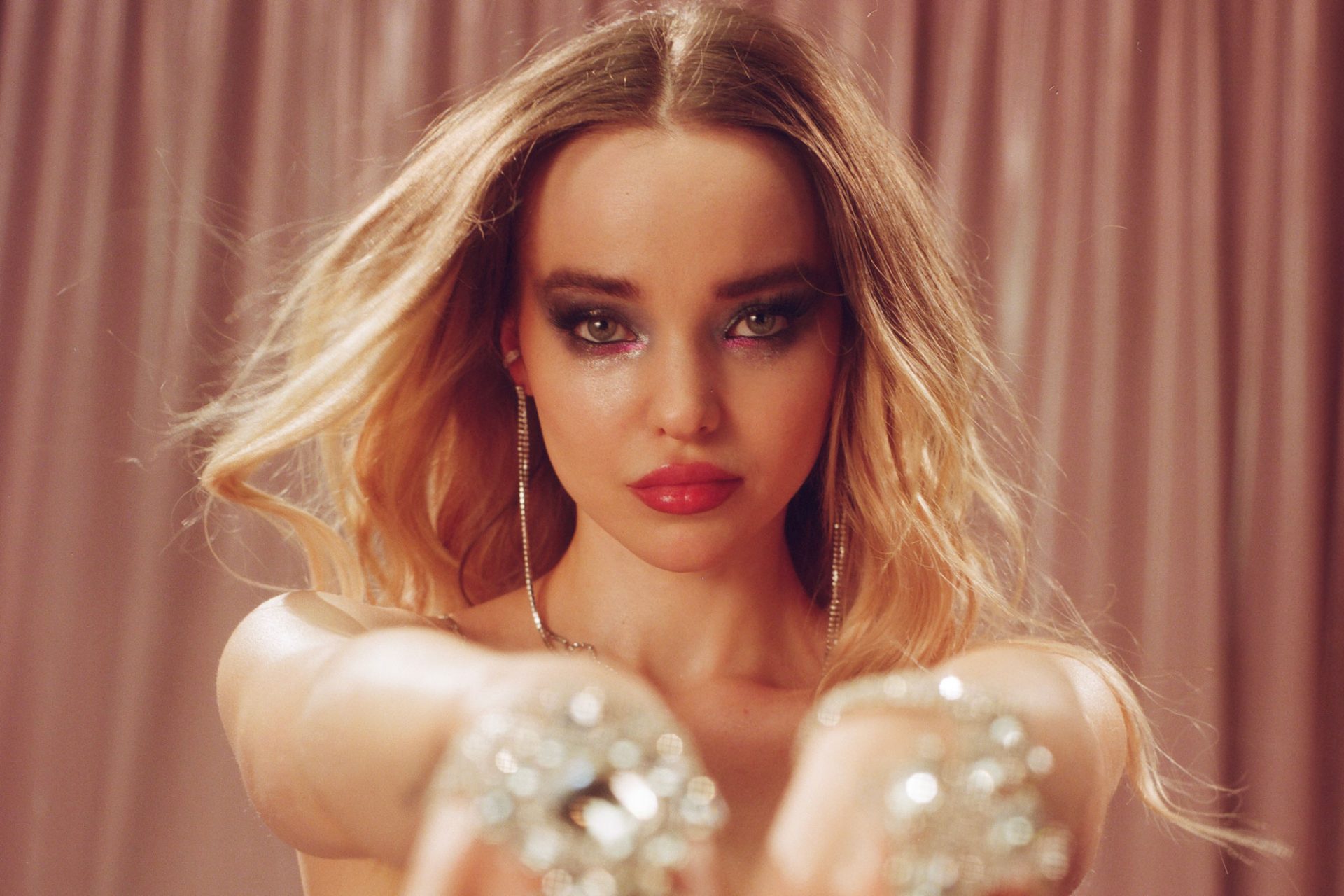 Dove Cameron: “You don’t realise how closely people are watching you”

“My favourite thing is when someone goes, ‘I have no idea who the fuck Dove Cameron is, but I love this song’.” You might recognise her from playing both of the titular characters in Disney Channel series Liv and Maddie. You might recognise her from her role as the daughter of Maleficent and Hades in the Descendants film series. You might even recognise her from being cast as Bubbles in the CW’s currently-filming live-action reboot of Powerpuff Girls. Talking from Atlanta on a sunny Saturday afternoon, one thing quickly becomes clear: with the release of her latest single ‘LazyBaby’, we’re being introduced to Dove Cameron as we’ve never seen – or heard – her before.

“I remember when I was like 14, when I knew I wanted to really do my own music on a large scale, I would say to music producers, ‘all I give a shit about is that it’s anthemic’,” Dove recalls. “I really kind of forgot that was true for me for a long time.” If we were to describe latest single ‘LazyBaby’ in one word, that’d be it: anthemic. With its buoyant melodies and catchy chorus refrains, the song is perfect fodder for hairbrush karaoke at its most empowering. Boasting out-and-out pop hooks and a shimmering sarcastic charm, this is Dove Cameron at her best. It’s also Dove Cameron at her most quintessentially herself.

“I’ve been really afraid of my public image for a long time because it was created with so little intention on my part,” she explains. Landing leading roles on a prolific network in your mid-teens is an impressive feat by any measure, and performing under shining set lights is an adventure all of its own – it just doesn’t leave much time for figuring out who you want to be outside of the work. “They never asked me to change myself,” Dove reasons. “I just knew what was expected.”

“The problem is that when you’re making those choices when you’re 15 years old, the world is watching, and they’re gathering information about who you are,” she continues. “You don’t realise how closely people are watching you because you’re just you.” Being herself is something it’s taken a while for her to settle into. Now she tweets words of gratitude and pearls of wisdom almost daily. Her social media accounts are beacons of positivity, poetry, and self-acceptance. And when it comes to songwriting, Dove is more creative than she’s ever been.

“My notes app has never been more poppin’!” she laughs. “I feel like I’m having a bit of a renaissance, both in my creative, personal, and professional life.” Whether it’s the more intimate, almost journal-esque inspirations found in her day-to-day life (“usually lying on the floor, I may be crying,” she grins), or working with producers to build a song and its sound from the ground up, Dove is in her creative element – and it started with ‘LazyBaby’.

Written toward the tail-end of 2020 into the start of this year, ‘LazyBaby’ is an ode to discovering and owning who you are in the wake of the end of a long-term relationship. “When you have a heartbreak, it rocks you so much that you’re not functioning,” Dove reflects. “I had no answers, and I was just losing my mind.” Born out of heartache and uncertainty, the resulting song is – in Dove’s own words – “not a breakup song. It’s a breakthrough song.”

Learning who she was outside of her relationships and away from her public persona gave her a new lease of life. “When the breakup happened, and I really lost myself and had to redefine myself, I decided I didn’t really care if people received me fully as I was,” she reflects. “It was just much more important to me that I was self-expressed in an honest way where I am now.” The result is music with as much attitude as it has aptitude, songs that are charismatic and contagious in equal measure.

“Music has always been an answer for me. It’s always done more for me than anything else,” Dove portrays. “There’s no amount of therapy or caffeine or speaking to friends or reading books or anything that could do more for me than the right song can.” And that’s exactly what ‘LazyBaby’ was: the right song, one that helped her grow from where she was to the place she needed to be. “I think music does a really good job at cutting through all the bullshit and getting to the core of people,” she grins. Really, that’s all she wants to do.

With videos of ‘LazyBaby’ dance routines, makeup transformations, memes and more filling up TikTok, connecting with the core of people is exactly what Dove is doing. “To see people make it their own is so special to me because it makes me feel less alone,” she enthuses. “It’s not like me, and then the fans as this faceless mass. It’s me and this girl who needed this song,” she continues. “It makes me feel like – and this is going to sound really broad and maybe a little bit heavy, but I mean it really lightly and purely and positively – it makes me feel like I am not a total freak.”

And this is just the beginning. As she talks, Dove repeatedly enthuses over her newfound creative renaissance. “Every release, I find more of myself, and I’m very pleased that the public seems to kind of be coming along with me on that,” she grins. “I definitely am at an all-time high. I’ve never loved myself more.” Preaching empowerment and positivity, her creative energy is at an all-time high – and the wave she’s riding doesn’t show any signs of cresting any time soon.

She’s playing Buttercup in the CW’s Powerpuff. She was recently cast in an HBO adaptation of Field Notes On Love. She’s collaborated with REZZ, and the pair have a new song on the way (“It blows my mind. It’s one of my favourite songs I’ve ever released, ever, ever, ever, ever”). She’s been writing with Upsahl (“one of my favourite artists”), and has more new material to come. To put it simply: Dove Cameron is living her best life right now.

While she remains tight-lipped about what her new music has in store, she’s quick to enthuse about what she hopes it’ll achieve. “I hope that my music makes people feel more themselves,” she expresses. “I hope that it helps you feel specific to you, more emboldened, more on fire, more sure of yourself, more in your body, more self-expressed, more alive… I just hope that my music speaks to you in a way that makes you feel more human, and more comfortable being whatever that means to you.”

Taken from the June 2021 edition of Dork, out now. Dove Cameron’s single ‘LazyBaby’ is out now.