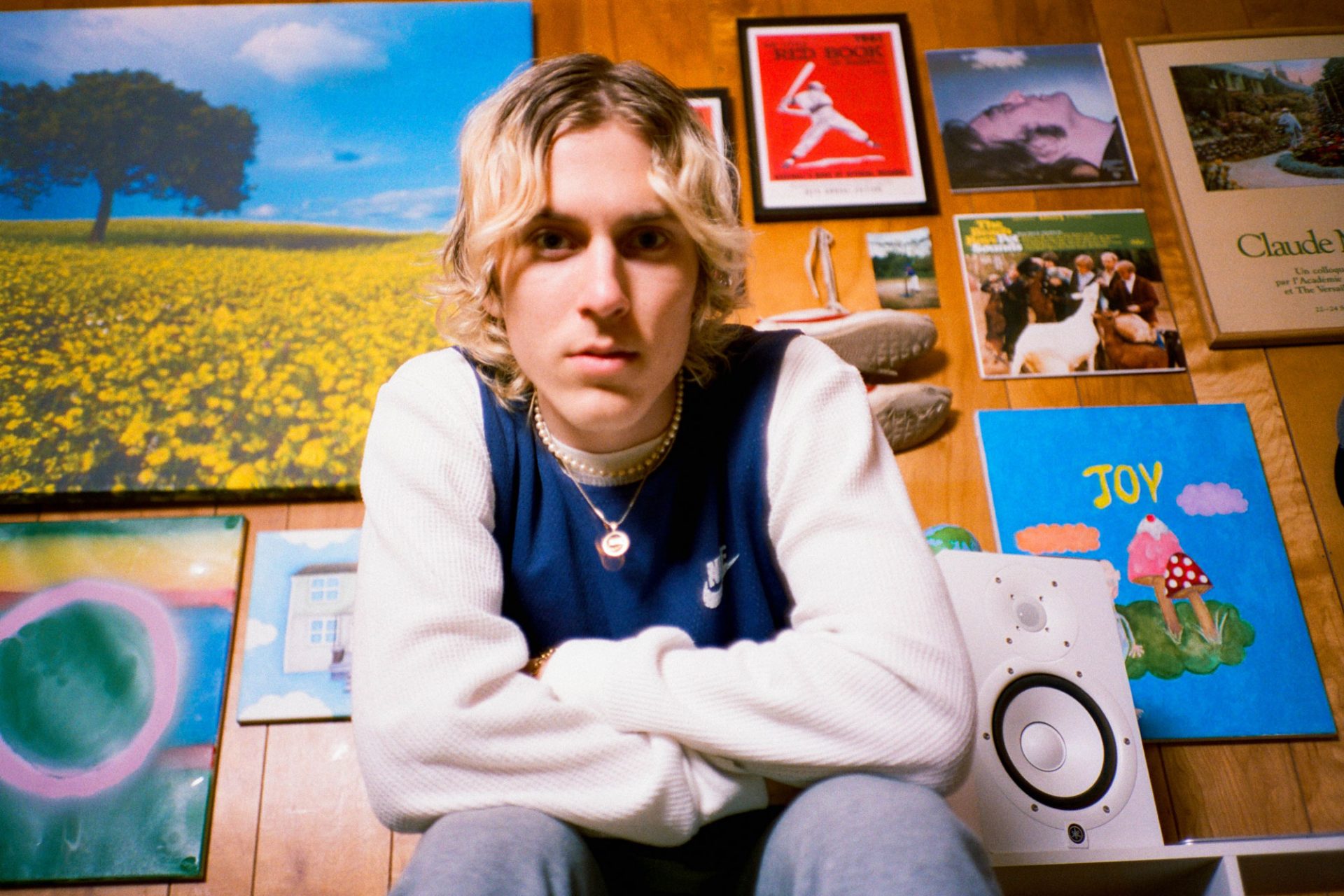 Dreamer Boy: “We brought in the cowboy hats and thought; let’s just go all in”

With a second album on the blocks, Dreamer Boy – aka Zach Taylor – is embracing the cowboy pop yee-haw.

Two years on from establishing himself in the US alt-pop scene with debut LP ‘Love, Nostalgia’, Zach Taylor, aka Dreamer Boy, returns with a new full-length project that he hopes will birth collaboration between young creatives across the globe and expand his journey to share his deep-rooted optimism.

Zach knew he’d be a performer from a young age, but adopting the Dreamer Boy persona was a transformative moment for the 24-year-old. “The first Dreamer Boy show felt like nothing else I’d ever done,” he reminisces. “I was finally playing the music that represented me so clearly and had this fun energy that I could bring out of myself using that moniker. It felt to me, I was finally free.”

This omnipresent joy is something he revels in sharing with his fans, particularly when he’s unleashed on stage. “This wasn’t pre-meditated, but I started asking the crowd to chant ‘yee-haw’ with me. It’s a bit gimmicky, but we’re having fun!” he grins. The Nashville-born artist is clearly not afraid to embrace his roots, and his sound has been described as ‘cowboy pop’; a term he coined himself. “It’s a tongue in cheek way of describing pop music form Nashville, Tennessee. I enjoy playing off of that fact instead of running from it, so that’s the label that I landed on. After that, we brought in the cowboy hats and thought; let’s just go all in.”

Cowboy pop pulsates with an almost excessively fresh and modern sound direction, but Zach still draws upon older influences. “I love singer-songwriters like James Taylor, Joni Mitchell, John Prine, George Harrison… these are my Mount Rushmore figures. I feel that in today’s day and age, music is made in such a different way, but I still romanticise the 60s process and mindset, and just the slow soulful nature of it. The sound I’m working towards has that backbone of these classic songwriters but intertwined with really interesting textures and genres while keeping the spirit of that music as the guiding light.”

Utilising those sonic textures gives the Dreamer Boy project its unique voice, and voicing emotion is the focus of the creative process here. As Zach explains, “I’m a very words-first person, but music to me is the perfect backdrop to support those words. When I’m making music, neither lyrics nor instrumentation comes first; it’s the song that comes first. I create a vibe and figure out a way to exist in the middle of it; I’ll chase the way the music feels. It’s an exciting adventure; I’m this narrator using my friends to help paint illustrations around the words.”

At a point where many artists are chasing listeners’ abbreviated attention spans as viral sensations, the auditory experience compressed into a 10-second make-it-or-break-it clip to represent the artist’s entire message, Dreamer Boy does not succumb to this. This second album once again delivers a long, atmospheric escapade.

“I come from a segment of my generation that fell in love with ‘Man on the Moon’ by Kid Cudi, ‘Channel Orange’ by Frank Ocean, ‘For Emma, Forever Ago’ by Bon Iver. These were world-building albums, so I’m so drawn to that album experience as a whole. That’s always the goal when I’m making music; the album comes first – I’m never working on a song and not thinking about its context in the record. I’m developing this bigger piece of music, and on the day-to-day, I’m just in the weeds working on specific parts of that, which are the singles.”

Zach and his team have maintained a clear vision for where they want to focus their output, which is building an expansive body of work, and the collaborative aspect has other concealed advantages. “Dreamer Boy as a collaborative project is why it is what it is; I work on all sides of the albums alongside my friends,” Zach clarifies. “We keep each other accountable; we’re constantly pushing each other, and it’s hard to even answer what it’d be if I was doing it alone because I have no idea. I’m so grateful for my friends; they’ve definitely kept me sane through this ‘slow’ year – having others around to lock arms with and go through this time together has been amazing.”

Having benefited from surrounding himself with fellow creatives, Zach wants to share similar opportunities with others, using ‘All The Ways That We Are Together’ as a delivery mechanism for this community-building.

“If my goal is to build a community and bring people together, I need to find every little way possible to do that. I’m starting small and hoping this record will generate a network that keeps growing beyond just this album cycle. I want to help people meet each other to help inspire that next collaborative project by giving people fellow artists to work with, or even just a friend.”

Alongside this influential position as a figurehead for the project comes a level of pressure to maintain this positive image and message – ‘with great power comes great responsibility’ and all that. Zach professes, “You have to acknowledge that you’re not a perfect person every day, and you can’t facilitate that positivity as easily every day. I’m learning to put less pressure on myself. We all have great days, we all have bad days; it’s ok for me to show up on a bad day – sharing those feelings can help instead of burying it deep inside because other people build us up. That’s a great practice, not even for just this project; I always try to be honest and open myself up for learning.”

It may seem that he can spin anything into a happy soundbite message, but Zach of course has those sad moments himself, and he utilises them very deliberately.

“I try to keep hopelessness out of my music unless I’m specifically writing about that feeling. There is a song ‘Mesa’ on this album which explores not feeling seen, experiencing some abandonment in a relationship, but in that hook, it turns around into this sonic oasis; even in this terrible, heartbreaking moment, with this person by your side, life’s still beautiful. I try to maintain that feeling of hope.”

Reshaping these more melancholic circumstances into the vital ingredients of Dreamer Boy’s journey required a lot of growth. “’Love, Nostalgia’ was mainly about past loves and me naively experiencing feelings, but this album was written while making that first album; that time of community and friendship, and feeling true love and connection for the first time. This is the part where it becomes real! Experiencing all this growth is what the album is all about; it’s about love, but not necessarily the romantic gushy kind – more the real, earthy type. The soil in which you grow something pure. It came from feeling connected to personal, spiritual experiences that guided me along the way.”

Touring the first record around the globe alongside his talented contemporaries like Clairo enabled this perspective. “Every time I’ve been on tour with someone, I’ve learned a bit more just by being around them – I’ve grown as a musician, artist and touring act just through conversations and the experience,” Zach reflects. “If you’re a doctor, you go into a residency and learn from other doctors – it’s the same for musicians.”

Existing in the public eye with a published body of work gives artists a clear point of comparison to benchmark their own success against, constantly challenging themselves to push themselves further, which is one facet of this adventure Zach enjoys the most.

“It’s interesting to have these albums as chapter marks for my own growth. When I listen to ‘Love, Nostalgia’ it feels like I’m turning back the pages in a book. I’m still the same character; I know why I wrote those words and how I was feeling at that time – but it is beautiful to have those as big journal entries to put a bookend on moments in your life. I’m still learning and growing as I go, but I think that starts as soon as you can ditch expectations of what you think you’re supposed to be and get busy being yourself; that’s what I wish I did sooner.”

Romanticising growth is the overarching theme with which ‘All The Ways We Are Together’ hits hardest, and the record itself explores its own journey. “I wanted the arc of it to be having feelings for someone. Not knowing if you should tell them, having told them and feeling chaotic, then arriving at a serene place not without its own questions. I don’t want to put people in a box and dictate how you should feel when you listen to it, though. My goals is to have it be a wishful, hopeful album that you can get lost in, and I hope by the end you feel renewed and can sense a new life chapter starting.”

Taken from the May 2021 edition of Dork, out now. Dreamer Boy’s album ‘All The Ways We Are Together’ is out 22nd April.