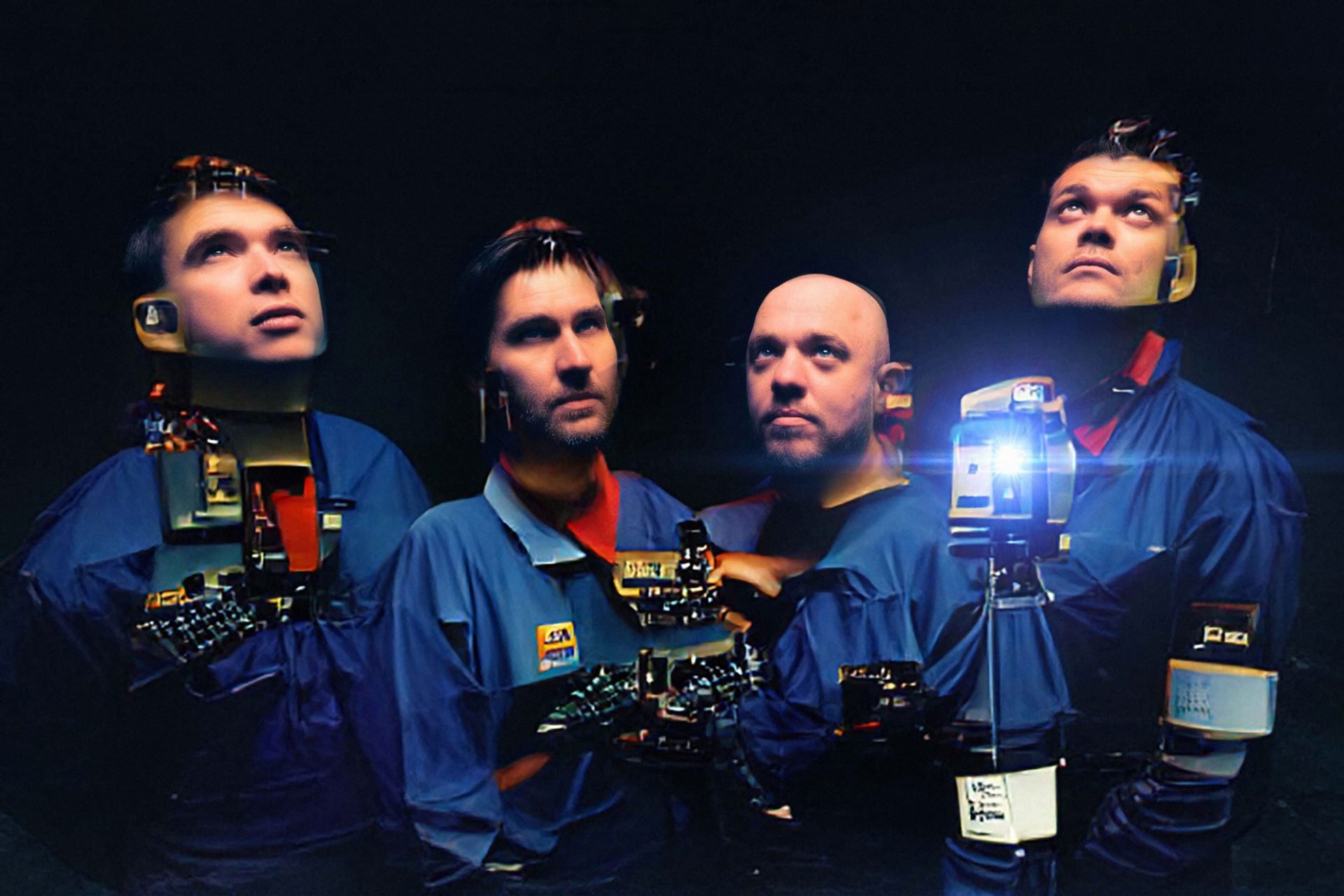 Everything Everything: “I don’t have space in my emotional cupboard for sad content right now”

Grounded, yet abstract; meaningful, and yet elusive. Everything Everything’s sixth record ‘Raw Data Feel’ processes trauma through the lens of technology, proving the indie darlings as raw and sophisticated as ever.

Everything Everything are well-known to stuff heaps of weird, complex and multi-faceted ideas into their sonically eccentric and yet always enjoyable music – an element of juxtaposition seems to define their art. With the experimental nature of their fifth and most recent record ‘Re-Animator’ earning the band their third Top 5 record, how does this success weigh up against their peculiarity? As frontman Jonathan Higgs surmises, “it’s, as always, not a straightforward answer.”

Bringing targeted themes with huge scope to the mainstream is not an easy or underappreciated feat; recalling the time their 2010 single ‘Photoshop Handsome’ first received Radio 1 plays from Zane Lowe, Jon reflects: “There are lots of little moments where I just think, how the hell did we manage that?” Over a decade later, the band are still pondering the same thought.

Now that their previous desire to dodge clichés is becoming somewhat relaxed (“how the hell can you repeatedly reinvent what we do? It’s impossible”), the Mancunian quartet is withdrawing from offering speculation on global events. Having predicted society’s downfall with ‘Get To Heaven’ and dealt with the aftermath on ‘A Fever Dream’, their upcoming sixth LP is turning inward. “I was an artist when we had this revolution, and I’m proud of that, but I don’t want that to be what I am. I don’t want to be defined as a political singer,” Jon states. “This record isn’t really looking at the world. Instead, it’s very personal. It’s about getting over trauma, but using characters to play that experience out, so I don’t have to deal with it head-on.”

Marketing a trauma-processing record embedded in upbeat electronica is, unfortunately, far from abnormal in current times. “A lot of people probably do have trauma from this period we’ve all gone through, whether they directly relate to what I’m saying or not,” the singer-songwriter confides. “I’m trying not to make [the theme of trauma] super obvious, but a lot of the songs converge towards the same thing, which is unusual for us.”

Trauma is dealt with indirectly, at an arm’s length and never as an isolated focus. “Not really thinking about it fully, but just distracting yourself from the truth.” This procedure is expedited by the second, tightly interwoven theme of ‘Raw Data Feel’. As Jon elaborates: “I speak about using technology to deal with something rather than me dealing with it myself. I used an AI’s brain to write my songs because I don’t want to talk about those things right now; that’s kind of the idea – relying on technology like a crutch, and this modern loneliness where your only friend is your phone.”

Hold on, AI writing songs? Yes, you read that right, Dear Reader. Midway through the creation of this new record, the band had a spark of inspiration and reached out to “some professor” who required data to fuel the mind of this artificial intelligence. “I chose four elements: the entire terms of conditions from LinkedIn; Beowulf, the ancient poem; the sayings of Confucius, the philosopher; lastly, four hundred thousand comments from 4chan.” An eclectic combination, for sure.

While a lot of filtering was needed to find usable content from the results, digitally-generated lyrics form a solid backbone of ‘Raw Data Feel’. Entire lines were lifted, rephrased, or reworked to form songs like closer ‘Software Greatman’, the title of which was the answer to the existential prompt – ‘what now?’

Computers are also responsible for the album’s artwork and distorted music videos, which build upon the haunting 3D renders used throughout the world of ‘Re-Animator’. “Well, this is a different thing entirely. Much more realistic and much more horrific,” Jon grins. “A big column of the record is this sense that trying to get emotion out of technology that isn’t real, but you feel like it is when you see it. You relate to these things… but they’re never real.”

Distancing oneself from reality became a necessity for the frontman, having faced a personal breaking point during 2020, which induced much-needed change and a less temporary sense of happiness into his life. “I had some turmoil in my life and knew that I didn’t want to sing about the same shit anymore; I invented some characters in the hope that maybe they could deal with it because I couldn’t at the time.”

One such recurring character is Kevin, who “comes up quite a lot on the record – his life, his trying to get out of his situation, his dreaming about a car to get him out of there; ‘Kevin’s Car’ was the only idea I had, I just kept thinking it’s got to be ‘Kevin’s Car’.” This sense of desperation may have stemmed from very real feelings, but the face of Everything Everything confirms he is moving away from sadness and positively utilising momentum. “I don’t have space in my emotional cupboard for sad content right now – I’ve done my wallowing, and I’m sick of it… but I still have to say some things. I’m just saying them in a different way now.”

Drawing less from psychology and neuroscience and more from inner intensities, the band ditched extensive reading material and wrote songs, “very much straight from the heart.” As Jon continues: “We wrote the record really quickly; there was no research or grand plan. It was just: let’s write a load of bangers.”

If you’re a regular Dork reader, you’ll know that exciting is exactly what we’re about. Genre-bending is also unavoidable within these pages, and yet Everything Everything still push forward a sonic that you’re probably not too used to hearing. Living outside of the box is a lifestyle that comes naturally to such an act, and they don’t spend too much time worrying about that either – “we’ve never fitted in, no, but I can’t think of any great band that did.”

With one track from ‘Raw Data Feel’ already proving the inevitability of standing out, the lead single ‘Bad Friday’ is one which Jon wrote thinking entirely about himself and the direction he wanted to travel, which doesn’t happen too often in this four-piece. Buried within a catchy hook is something more sinister… “At surface value, it’s about a night out. Really, it’s about violence and abuse, but it’s being given this coat of paint which makes it appear to be a song about a crazy night out – one during which you get so drunk that you can’t remember what happened, you can’t remember how you got beaten up. It’s obscuring the reality and blaming it on someone else. But as far as anyone listening is concerned, it’s a party tune.”

“It’s quite carefree, and it’s very us. It’s confident because it does sound ridiculous, but we’re just very used to what we sound like.” In terms of the thirteen tracks yet to drop, ‘Bad Friday’ gives a solid hint at the future. “It’s a good indicator – it’s a party with a dark secret, which is how I would describe the whole album.” Get ready to dance, but remember to keep an eye on your surroundings.

Taken from the March 2022 edition of Dork, out now. Everything Everything’s album ‘Raw Data Feel’ is out 13th May.