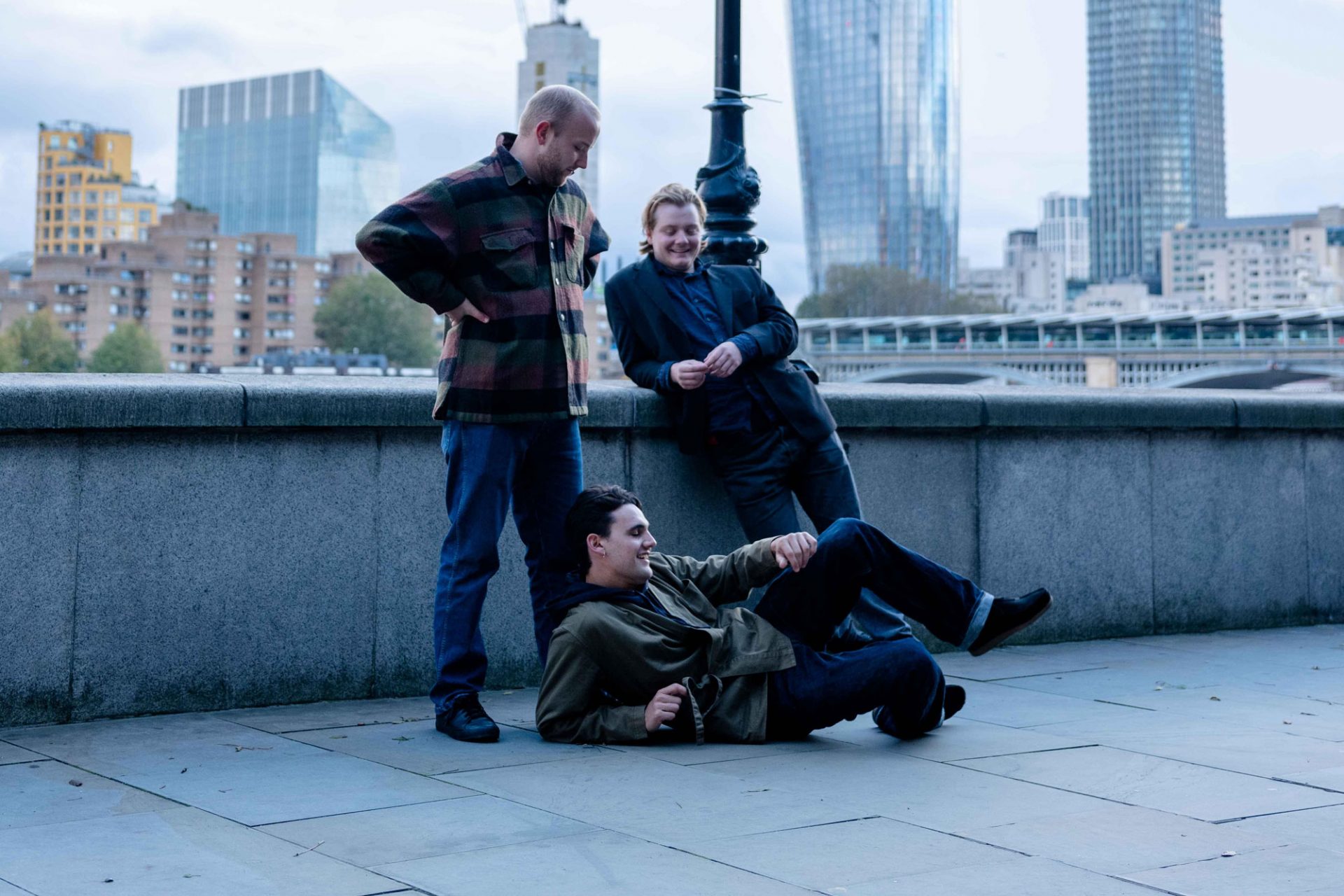 Famous: “We’d prefer our music to be considered as emotional stand-up comedy”

London trio Famous are coming out the gate with a 5* EP full of twists, turns and unexpected charm.

Everybody wants to be famous. That’s what Superorganism said anyway, and we’ve never seen a reason to argue with bangers like that. So that must mean that you can definitely put your trust in London art-rockers Famous, especially now with the release of their stunning new EP ‘The Valley’. With songs about what becoming an adult brings and how to get through a quarter-life crisis, it’s at times dazzling in its ingenuity and wild in its multiple abrupt musical left-turns. It’s a good time right now for bands who like to stretch and push at the boundaries of what indie music can be like, so it was perfect timing for Dork to catch up with Famous frontman Jack Merrett and drummer Danny Sanders.

Their new EP carries on and capitalises on the potential that ‘England’, promised. Now permanently cut down in size from their original six-piece days, the trio (bassist George Gardner is missing today), the band have at the same time still managed to expand their sound. ‘The Valley’ is a scintillating, richly textured deep dive into life in a modern city, exploring themes of isolation and what Jack describes with an embarrassed laugh as “that particular kind of malaise that one feels in those very early days of feeling vaguely like an adult”. Later on, he talks about how any certainties of life that he held during childhood have faded away to be replaced with an uncertain future. But somehow, all those bright colours of possibility, potential and despair have merged into one heady mix, a soundclash that veers wildly from the high-energy aural assault of ‘Nice While It Lasted’ to the triumphant lo-fi of the title-track and ‘Modern Times’. It’s equally utterly brilliant and inescapably off the rails. “I definitely had a few sleepless nights trying to think how it could all fit together,” admits Jack, laughing.

Pinning down what their sound is proving to be beyond anyone. There are guitars present, but they aren’t a guitar band. There are synths and electro surges, but you wouldn’t call them an electronic band either. The last couple of years have seen a host of bands who fall through the genre cracks, acts like black midi and Black Country, New Road proving too elastic in sound and style to be pigeonholed anywhere easily, most stuff just getting chucked under post-punk. Slowly, a tight-knit scene is emerging, as this generation of bands name-check each other on their songs. This time ‘round, it’s the turn of Jerskin Fendrix to get a mention here on ‘The Beatles’, while Jack reveals that he is mentioned on BC, NR’s ‘Track X’. He won’t confirm where, but we’re almost certain it’s the bit where they talk about someone called ‘Jack’. “The truth behind the music,” quips Danny at this hot scoop. Famous are more than happy to be part of this scene. “It’s really an honour to be considered alongside them,” agrees Danny, “because what bands like this are doing is what excites me the most at the moment. We’re not paving the way but just to be a part of that is really great.” It’s a subject the pair are passionate about. “With some notable exceptions, British music was shockingly worse when we were growing up,” says Jack. “So just being around people who inspire you is obviously a nice thing. I don’t listen to guitar music, though, so it’s always kind of strange that I’ve ended up making it,” he finishes with a laugh.

Of course, all this talk of genre-defying bands can only lead one way – especially when ‘Modern Times’ starts talking about ‘Fucking in a car, shooting heroin / Or at least spending better times with my parents”. Sound familiar, anyone? “Oh yeah, I love The 1975!” states a suddenly 110% more animated Jack. “They’re definitely our soulmates.” Danny looks nonplussed, but the frontman isn’t hanging about. “I don’t feel like there are many people on his level of actually writing songs; they’re all fucking bangers.” Danny’s facial expression doesn’t change, even when he wryly describes the sight of Jack losing his mind in the front row of a ‘75 gig. “To be clear, I’m speaking for myself here,” chuckles Jack. “I don’t need to sully their good name with my 1975 obsession. But you loved it!” Shaking his head mournfully, Danny explains that he was simply in the wrong place at the wrong time.

Feeling that this one could run and run, we move on to the subject of Jack’s exasperated cry on the title-track that we don’t need any more songs. “It was me saying I need to stop writing songs about a particular person,” he explains before reconsidering. “But yeah, maybe there’s an element of it all being downhill from here with songs. There’s been enough. We’d prefer our music to be considered as emotional stand-up comedy or something from now on anyway.”

It is this that seems to finally break Danny, the drummer simply walking off for reasons unknown. He does return pretty sharpish tbf, and he begins to talk excitedly about resuming their Windmill residency. “We’re gonna get by on the fact that no-one’s done anything for months,” he grins. “We could go up there and play the spoons, and it would be entertaining.” “Is it still socially distanced?” Jack asks, worryingly uncertain on the legalities. We assure him that it will be and pleads with him not to leap onto the front row, especially as Dork plans on being in it. “That’s good. We’ve only sold the socially-distanced amount,” he sighs, before pointing out that they are well used to only having twenty people watching them in an awkwardly big space anyway.

“Maybe we should have a song where we play the spoons,” Jack ponders, Dork realising that this is a glimpse into how the magic happens in the Famous studio. “Yeah, that is how it happens. I have an idea, and Danny says no,” Jack says, at the exact same instant that Danny shakes his head. “I’m pretty into the idea of the album opening with a rapturous chorus of bagpipes, too?” he offers, as if this will get a better response. It does not. “The live review will be ‘it was a fucking shambles’,” grins Jack, ignoring any traditional band publicity tropes. Thankfully for all concerned, he was wrong. The fame is spreading.