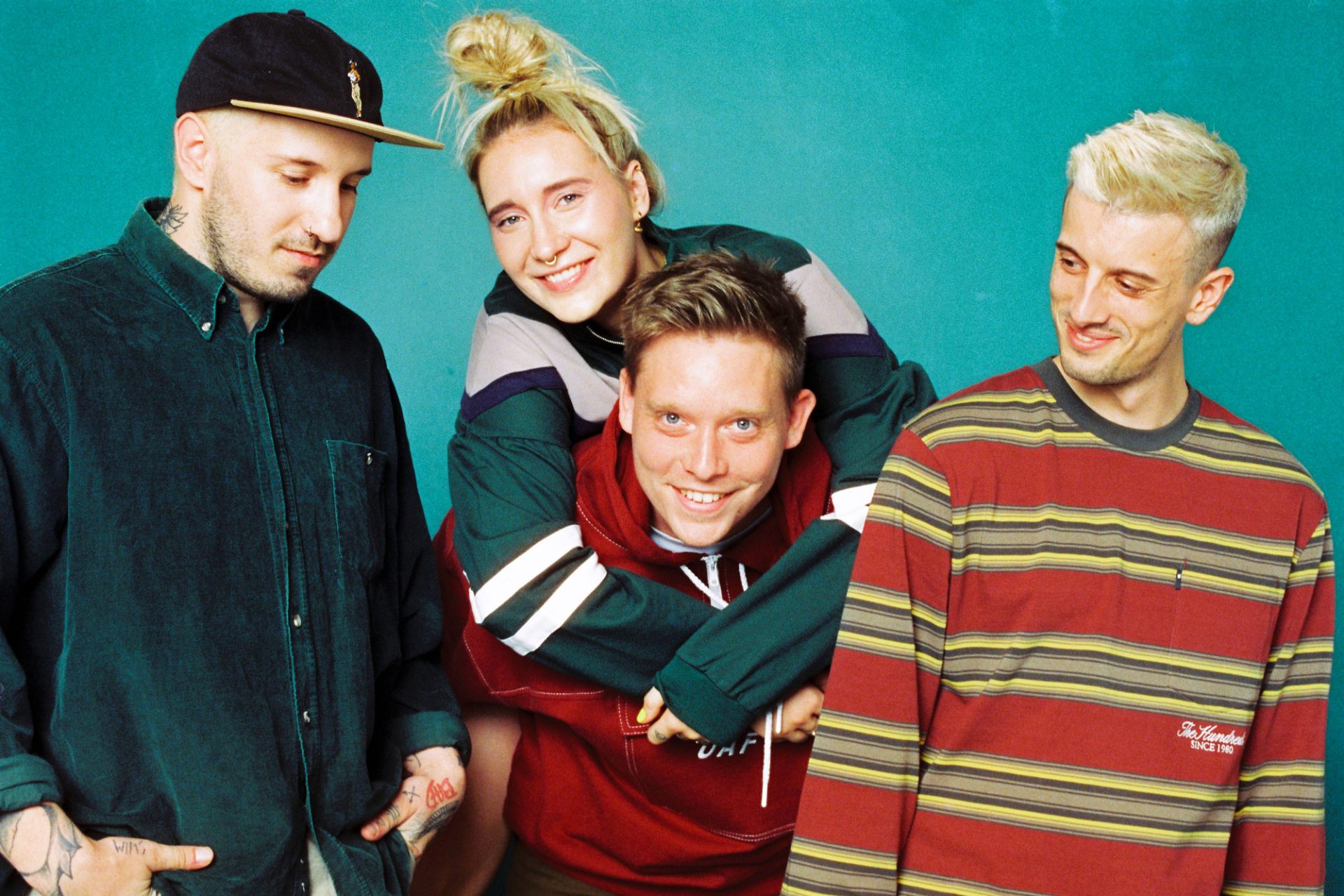 Fickle Friends: “Is this weird? Are people gonna get it?”

Guys, we don’t mean to alarm you, but it’s nearly 2021. We’ve only just stopped writing the date as April, and now there’s a whole new year to contend with. Christmas dinner? It’s just gonna be you and your cat, mate. New Year’s party? Under a blanket on the sofa. Resolutions? Dunno, can we leave the house yet?

There are a lot of unknowns going into January, but one thing we can put in the diary is a new EP from Fickle Friends. Back with their retro pop bops, ‘Weird Years (Season 1)’ is the first instalment of their upcoming second album (oo-er), and it’s coming early-doors next year.

Frontwoman Natti Shiner tells us more about what the band are up to, before popping off to watch The Great British Bake Off.

How’s social-distancing treating you? Have your days been very different than usual?
We should have been on tour in Asia right now, so yeah – pretty different vibe right now. Lots of downtime. Lots of time in the studio, writing and recording. My social life is exclusively visits to my yoga studio, the train ride to Brighton and Zoom meetings, lol.

What’ve you been doing to keep your spirits up?
Writing songs, drawing illustrations, learning to animate, playing with my kitty cats, stick and poke tattooing myself, becoming a yoga teacher, cooking new vegan recipes, cycling EVERYWHERE, watching Korean movies, fantasising about being able to tour again…

What has all this meant for how you create music?
I still commute to Brighton every week so Jack and I can work in the studio. When it was full-on lockdown, and we couldn’t travel, it was super tough, but we would share the odd voice note, and I wrote a lot of poetry and scribbled down thoughts for concepts. Thankfully our creative process has stayed relatively the same. It keeps us sane. Ish.

What else has changed for you guys this year?
The whole album campaign, really. We’d kinda planned for a September release, but with COVID we had to rethink everything and came up with this TV show / multi-part album format. We’ve just changed management and are super excited to have new blood and new ideas in the FF camp. I’ve said it so much this year, but amazing things can come from setbacks and limitation. We are super stoked for what’s to come.

Can you tell us a bit about how this new EP came to be?
This is the first instalment of our second album. We wanted to break it up into parts as it would allow us to go with the flow a bit more and release music more consistently. We have had a lot of time off, and we just wanna keep putting out as much content as we can now. The whole album will kinda be like a box set: ‘Weird Years’ seasons 1-3. I keep thinking to myself like, is this weird? Are people gonna get it? But there aren’t any rules for putting out records anymore. So we are doing what suits us. Maybe that will end up in a 20 track album, who knows? Haha.

So there will be three instalments?
Planning for three, but it’s really up for grabs, to be honest. I don’t know where ‘Weird Years’ will take us, but I’m excited for it all.

‘Weird Years’ feels very apt for life at the moment, do you think upheaval and uncertainty are the new normal?
I definitely think so. If there’s anything to take from this year, it’s that you gotta keep riding the wave, steering into the skid. Going with the flow. Any more shit analogies?? Haha.

Does ‘the state of the world’ impact the music you find yourselves wanting to make?
I think it impacts our music conceptually, but we have always been creatures of habit, and that’s writing upbeat, happy-sounding tunes with sad undertones. If anything, right now, we have more of a drive to write happy songs to try and lift the spirits of both ourselves and our fans.

It’s really interesting that the release method is inspired by TV, has that influence seeped in anywhere else?
I think visually it’s served as a big influence. Our inspiration behind the press shots and artwork for this record were tonnes of 90s Japanese TV adverts, really awesome fashion and brick mobile phones and record players and Walkmans. And then the artwork/box set vibe definitely had a pinch of our fave TV shows from that era. Friends, Buffy, Goosebumps, Fresh Prince… I’d like to bring some of this into a really awesome music video at some point too.

Are each of the seasons going to have a different vibe, or narrative?
The narrative kinda runs differently for each song. They’re all moments from the last few weird years. If anything, ‘Season 1’ is on the more pop side of FF and ‘Season 2’ will be slightly more lo-fi. But I guess the main thing is that with each season there will be a little more growth, a bit more acceptance for what’s happened and what’s going on. There’s so much more we wanna write, so it’s hard to nail down the complete narrative right now.

What TV shows are you into at the moment?
I’ve been watching Gilmore Girls, hahaha. It’s very comforting and wholesome, which is exactly what I need at the moment. But I’ve loved watching Fleabag, I May Destroy You, Chewing Gum, Ru Paul’s drag race, Girls (for the third time), Normal People (preferred the book), The Boys, and Sex Education. A fair bit actually, haha.

In what ways is this new music a step on from what you were doing before?
I think we have never had the time to just write and write and write without the distraction of tours etc. We have produced a lot of useless shit but also some of our favourite material to date. Song concept has become something really important to me, and I think that makes for a much stronger creative foundation. Hopefully, that can be heard in the new music. I feel like we used to be quite fickle with song meaning and lyrics. I look back at ‘Say No More’ and think to myself, what an earth was I getting at?! Lol.

What’s next for Fickle Friends?
LOTS of music. Animations. Livestream gigs… real gigs, hopefully. Art in all forms. Collaborations. Ups and downs, for sure. Living in an ongoing pandemic, I guess I don’t really know – and I’m just trying to make peace with that.