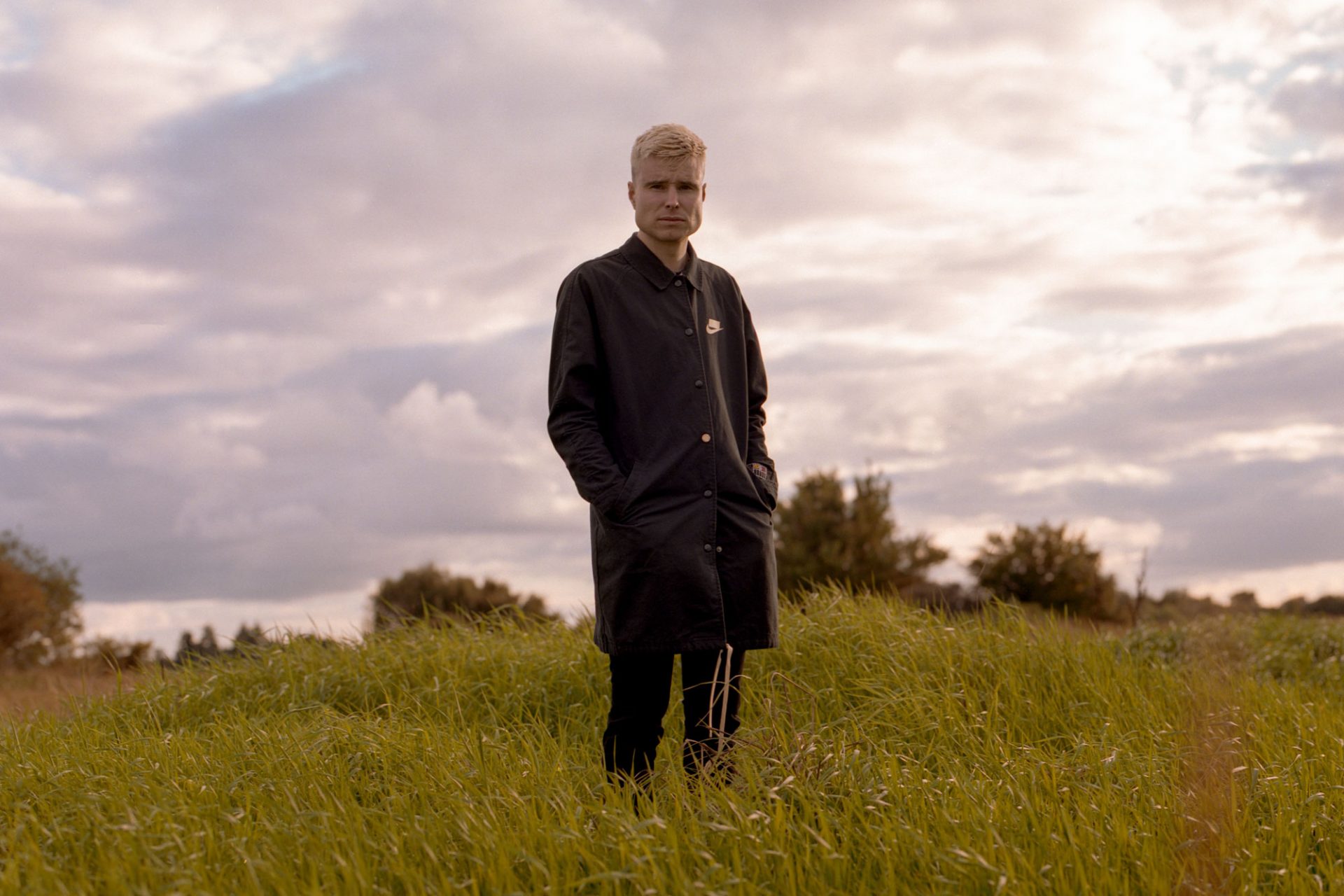 For Those I Love: “There’s a great responsibility when you make this sort of thing public”

The project of Dublin producer David Balfe, For Those I Love’s self-titled debut album is a poignant exploration of grief.

Some people never fade from memory, no matter how painful the parting. When Coolock poet Paul Curran passed away in 2018, the ripples that he been making in his local scene became a surging tide that have since washed around the world – first as a huge inspiration to The Murder Capital on their debut ‘When I Have Fears’ (the record was dedicated to him), and now once again as the focus of the stunning self-titled debut from David Balfe, aka For Those I Love. It is as much a raw exploration of grief as it is a celebration of life and friendship, a brutally honest examination of David’s journey through an emotional landscape that none would want to tread. Catching up over Zoom, he sat down to talk us through what is evidently still a hugely painful area of his life.

“After everything happened, I remember everything feeling so dream-like. I would sit outside in the freezing February cold just to feel uncomfortable,” he recalls from the immediate aftermath of Curran’s passing. “And there was maybe something in that about how I acknowledged that it made me feel ‘something’, that it made me get a sense of life happening again.”

There were some seriously dark moments for David, something that he recognises today. “There came a time during the writing where I was lost to the world, I was just walking myself down a very dark road, and my friends knew it,” he reveals. “I was just seeking oblivion through drink every day, just going for it way too hard every single day. I would get obliterated and send my friends these ridiculous voice messages saying ‘everything is grand, I’m having a great time’.”

Thankfully today, due to what he describes as “uncompromising and uncomfortable love and comfort from friends”, and help from therapists, he finds himself in a much better place. ‘For Those I Love’ is a record that doesn’t shy away from the dark spells (many of those voice messages appear throughout), but also one that spends as much time basking in the nostalgia of true friendship and times well spent. Over classic beats that bring to mind the likes of Jamie xx or Burial, Balfe delivers lyrics in a style that drips with every emotion under the sun. Get him to describe that style, though, and he is, for once, stumped.

“I’m not a very good singer,” he laughs. “People call the stuff I’m doing now ‘spoken word’, and I don’t know if it is? People have asked me to speak about the spoken word scene, and I’m like, mate, I don’t have a fucking clue!” One comparison that comes up often is Mike Skinner. “I don’t ever remember people saying ‘Original Pirate Material’ is a spoken word album, though! I was told at the start, ‘You need to be able to describe your music’, and I don’t know where it fits in?” he questions. “I’m certainly not listening to fucking Polar Bear when I’m trying to write, or that bizarre Henry Rollins spoken word thing. But Mobb Deep isn’t helping me either!”

In truth, those Skinner comparisons are a thing because, like him, David captures the tiny details of life and brings them to you in just the same way while also making it sound like a perfect night drive soundtrack. There is a sense of euphoria to the music that carries through tracks like ‘To Have You’ and ‘Birthday’ that feel like they are almost a direct contradiction to some of the themes of the record.

“Someone in my family passed, and I ended up with a little 2001 Renault Clio when I was 20, and so I learned how to drive before my friends did. It opened up the geography of our world a monumental amount,” he remembers. “We would drive around the city all night and listen to Raidió na Life and their dance programmes. So for years, the bedrock of the most formative moments of our friendship were to the sound of dance music.”

As he began to retell these stories and revisit those memories, it was natural to base them on the original vibes that soundtracked their lives at the time. The addition of WhatsApp recordings and precision-aimed samples add up to a heady listen that almost places you in the back seat on these night drives. These times cruising around Dublin were also the beginning of For Those I Love, whether David knew it or not. “I’d burn CDs with a few tracks of other artists, and then I’d insert one or two of my own in-between,” he says. “And if one of my friends asked ‘what’s this’ or tried to find it on Shazam, I knew there was something worthwhile there.”

Eventually, he ended up with over seventy songs for his project and began the daunting job of whittling them down into something cohesive. “There’s a great responsibility when you make this sort of thing public, not just the open world but your immediate friends and family,” he says. “And I really wanted to make sure that the balance was struck between something that was realistic of our experience during that period, but also wasn’t entirely devoid of light and hope.”

Admitting that a lot of the songs were “anchored in darkness and the pain of it all”, that pain is etched on his face as he describes trying to find that balance. “There was no net benefit for anybody to hang about in that feeling; you have to find a way out of it,” he simply states.

Like everyone, he hasn’t moved through grief in a straight line, but there is a sense that he is at least still moving through it even in his lowest points on the record – even if he has not perhaps yet found his way through by the end. There is no disguising its impact on him and his tight-knit circle of friends. “Loss is something that’s so individual to each person, and the way we move through those stages is so different; everybody went a different route at a different pace,” he admits. “Some people felt everything immediately; others of us didn’t feel anything at all for months?”

That sense that there is no full stop at the end of mourning returns at the record’s climax. “The end of the record is, I think, a lot darker,” he says, “It was somewhere I could just write very directly about a thing that happened and the pain that I feel from it. I really struggled writing some of those lines; it’s one of the few moments where there really is nothing left to hide behind. It was extremely important to acknowledge that reality.”

The record doesn’t shy away from bigger themes that feed into its main focus. On tracks like the scorching ‘Top Scheme’, Balfe explores the factors that led to his best friend’s untimely passing. “There is such a misplaced hatred against a lot of working people, and there’s a lot of chasms in our society and communities who struggle,” he explains. “They’ve just got no understanding at all of what can lead a person down some of these darker roads, particularly stuff like addiction. It’s so utterly misunderstood. And with economics, and the lack of hope that economic instability can cause… I had an inability to sleep for months and just obsessing over everything, like where did this go wrong with Paul? What happened? This stuff can absolutely haunt you, but I was trying to look very directly at these root causes of suicide within our socially and economically deprived communities.”

David might not find any easy answers, but he sure isn’t going to stop looking – admitting that much of his current writing is also delving into the same subjects. You get the impression that this will be a lifetime pursuit of truths and reasons.

Ultimately, ‘For Those I Love’ is a record built on a community of friendship as much as it is rooted in the real Coolock community. Admitting a fear of losing these memories over time, David thinks of it as a way of “immortalising these people and moments”, something that will live on forever. Just like your Sam Fenders and your Fontaines, there is a real texture and, well, real-ness about it that is in huge part down to it being rooted in a particular place and time.

“I’ve seen more and more of a rise in people being more comfortable in their own accent, their own slang,” he agrees. “And I think, when you see that then it’s natural that more people start to express themselves a bit more with their own voice.”

He might not rate his own singing ability, but Balfe is using his unique voice to celebrate his best friend. “Paul found a voice that represented all of us,” he says in tribute at one point, a fitting testament to a life, and a friendship, that will truly never fade.

Taken from the April 2021 edition of Dork, out now. For Those I Love’s self-titled album is out 26th March.