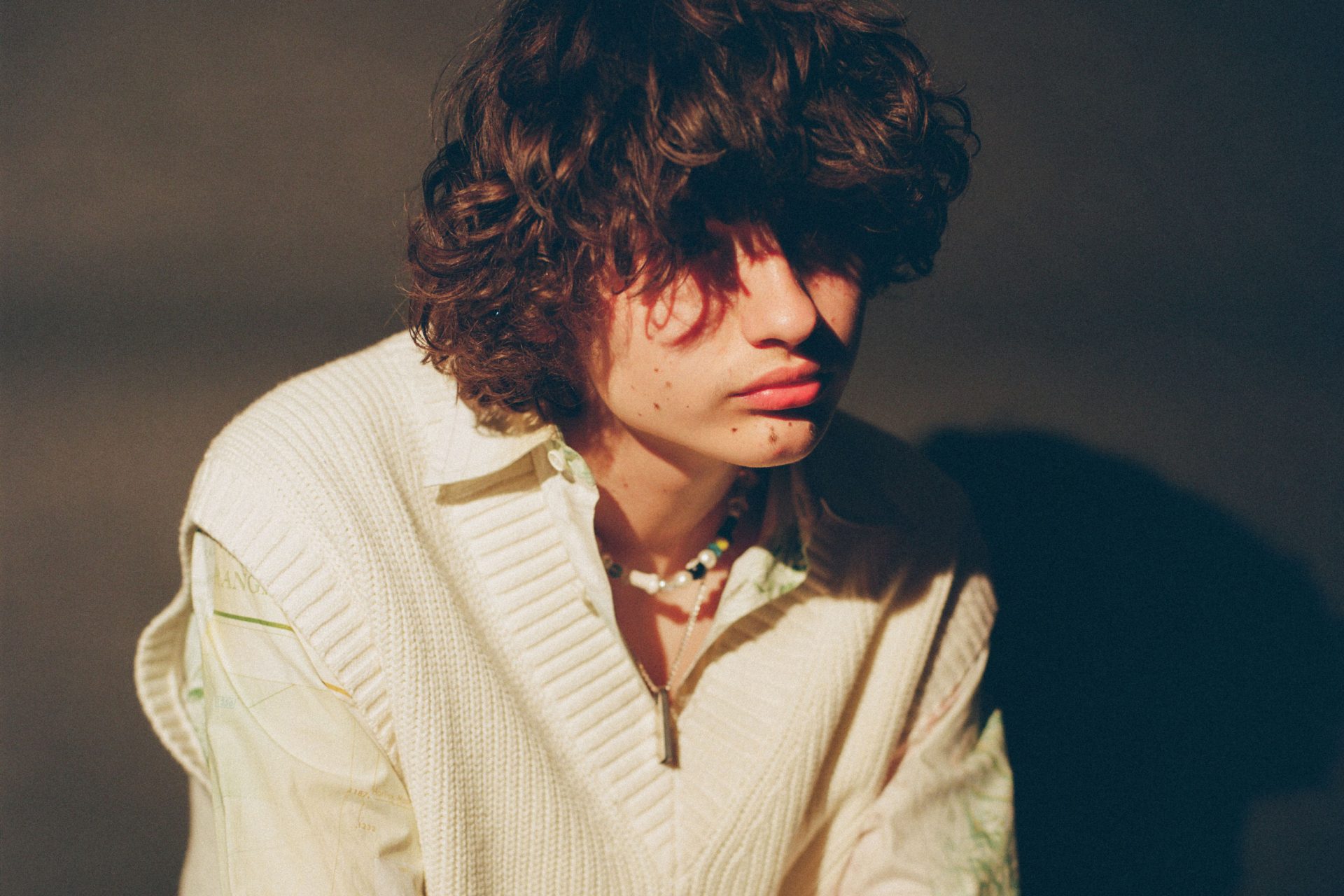 With his new EP ‘all dogs go to heaven’ just landed and a heap more to come, Glaive has the potential to become one of hyperpop’s breakout stars.

“I’m obsessed with music. Everything about music is the best thing in the world.” These are the words of a young kid for whom the whole world of possibilities and inventions and hopes, dreams and inspirations is spilling out in front of them. Glaive is only 16, and he’s not concerned with the baggage of the past or conventional wisdom of how you should do something. No, no, Glaive has only one concern. To be the absolute best musician he can be making exactly the music he wants to make. There are no boundaries and no sound, no matter how strange is off-limits. Welcome to the new generation.

Glaive’s passion for music has taken him from making experimental beats in his bedroom to well, making more expansive and mind-bending alt-pop songs while still in his bedroom. But his bedroom is of central importance. “This is where I do everything,” he exclaims. “It’s crazy.” Indeed, Glaive’s bedroom in his North Carolina home has been turned into a full-time creative hub. For a start, it’s massive and is illuminated by a number of LED strip lights that give it a piercingly bright glow. The walls are covered with writing and weird art, and general ephemera. There are cameras and of course, the obligatory computer and workstation. Glaive, aka Ash Gutierrez’s, whole creative world is encompassed within these four walls. He started out just making music, but this has snowballed into something pretty big pretty fast. “Everything creative has become an obsession,” explains Glaive as he talks in a super endearing mile a minute way. At first, I just did music, and then everything else would be figured out. If I wanted to do merch, somebody else would do the design. Now I’m like, I have to do the merch, every design that’s come out recently I’ve done. It’s just me sitting in my bedroom doing all of it, including the cover art.”  “It’s annoying for other people because I’m doing everything creative that surrounds my stuff, ‘’ he laughs infectiously. “I love creating so much. I have Photoshop on my computer, and I’ll just sit there for hours creating. I like designing stuff for fun.”

With school just broken up for the summer, Glaive has a decision to make now as to whether he leaves now and leaves his school days for dust or carries on. He is in the third year of high school in North Carolina. Over her, that is the equivalent toi the year you can leave when you basically have something better to do. We think it’s fair to say that Glaive definitely now has something better to do. “Do I have enough time as I’m starting to do shows now?” he ponders out loud. “The first week I’m due back, I have a festival.”

It’s easy to understand how school suddenly took a backseat. Glaive’s rise up the alt-pop world has been swift and striking. He is now seen as a figurehead of the thriving hyperpop movement, but in truth, you can’t really put a label on the music that he’s making as it’s changing all the time. He only started making music properly in the first instance in the last year of the pandemic. The only thing you state with certainty is that life won’t be the same for him again. “It’s been life-changing,” he says, talking about the last 18 months. Even that sells it short. This has been the best year of my life. Music went from zero to a hundred. Recently I’ve been doing things that are gonna take it to a whole new level. I’m very excited.”

The next level stuff he’s talking about is his forthcoming EP ‘All Dogs Goes To Heaven’, which follows last year’s acclaimed ‘Cypress Grove’ release and the huge number of tracks and sonic experiments that he has been dropping online on platforms like SoundCloud along the way. Being online and part of a collaborative community of like-minded artists, musicians, and fans is central to Glaive’s work, and it’s exciting now that things are opening up again for that online buzz to translate into real face to face excitement. “Online was such a big part, and only now is it becoming a real thing that I can feasibly see,” he says. “Now I’m going outside, and I’m being recognised, and it’s crazy to see. Online is different, they are just people on the internet, and it’s easy to connect with them, but in real life, you’re able to see what people really are, and it’s cool to see that people like your music and support what you’re doing. That’s been a big thing for me. Wow, it’s translating to real life really well.”

Glaive’s music is a genre-fluid expression of a desire to do things differently. A desire to shake things up and forge your own path. Sometimes the harsh electronic sounds will clang and rub against each other abrasively, and sometimes they will sound sweet and blissed out. It’s an amorphous, ever-changing experience. For Glaive, though, one thing is at the heart of it, and that’s the emotional resonance of his songs and words. These are not sonic experiments but songs rooted in deep impulsive feeling. “I think the words are immensely important,” he explains. “I’m not a writer. I don’t sit down and write anything. I have a song called ‘1984’, and there’s a line where I say, “I wasn’t lying when I said you meant everything to me”. I had that on my phone in May 2020. I wrote that down in my notes and didn’t use it until May of this year. I’ll jot down notes here and there, and whenever they fit in a song, they fit in a song. I’ve never sat down and written anything, but I’ll just go line for line and think up something on the spot. When I’m in a creative flow, I’m not thinking about how deep the lyrics are just making something that feels good.”

His earliest musical grounding was in the brightest and most expressive pop music, and you can still hear that in his music today, albeit in a rather more warped fashion. “I grew up on pop music. Just whatever my mother was playing on the radio. Very catchy sounds, and I think that definitely comes into my music today. It’s music that gets in your head. I’ve been trying to do that. I got into EDM on youtube when I was 12. I got into SoundCloud through Lil’ Peep. I got really into 100 gecs, and they were a big inspiration. I’m wearing Yung Lean merch right now. Yung Lean was very inspirational with the way the beats were. All that stuff culminated into my music.”

He’s already had some experiences where some of his idols have been in touch with him. “I was a really big fan of the rapper Young Bans. That was my era of Soundcloud. Cole Bennett got in touch with me. I feel like everyone who likes music knows at least one Cole Bennett video. He’s a legendary guy,” he says excitedly. One celeb connection, though, stands head and shoulders above the rest. “Avril Lavigne DMing me was cool!” he cries. “I posted a question on my Instagram story, and they asked me if you could make a song with one person in history who would it be and I said Avril Lavigne. She responded and said ‘Who’s that?” I love her so much.” which Avril song is his fave, though? “’Sk8ter Boi’ is obviously a classic, and everyone knows ‘Complicated’. Maybe the whole album ‘Let Go’. I would say the entirety of ‘Let Go’. It came out in 2002, and my dad had it on his iPod. That was the first time I heard Avril Lavigne.”

Looking ahead to the future, his next EP marks a significant moment for Glaive. “It’s a huge step up,” he proclaims. “’All Dogs Go To Heaven’ is on a different level. ‘Cypress Grove; was more indie pop and a little bit more romantic. These songs are more fuck you, I’m doing amazing now, I’m feeling great. They’re not super uptempo happy songs, but they’re more hard-hitting.”

It’s an exciting time to be a musician operating in the experimental sphere that Glaive works in. A new audience is finding their new heroes. “It’s definitely getting to a place where people are not going to listen for a certThere areng,” he says. “There’s obviously kids who are only into one kind of music, and that’s how it’s going to be forever, but I think we’re getting to a place where people want to hear stuff that’s not as conventional as stuff that’s on the radio. When I was growing up, music was all very similar chord progressions. It was conventional. Very well made, written and produced. People my age want to hear something a little off-kilter and a little different.”