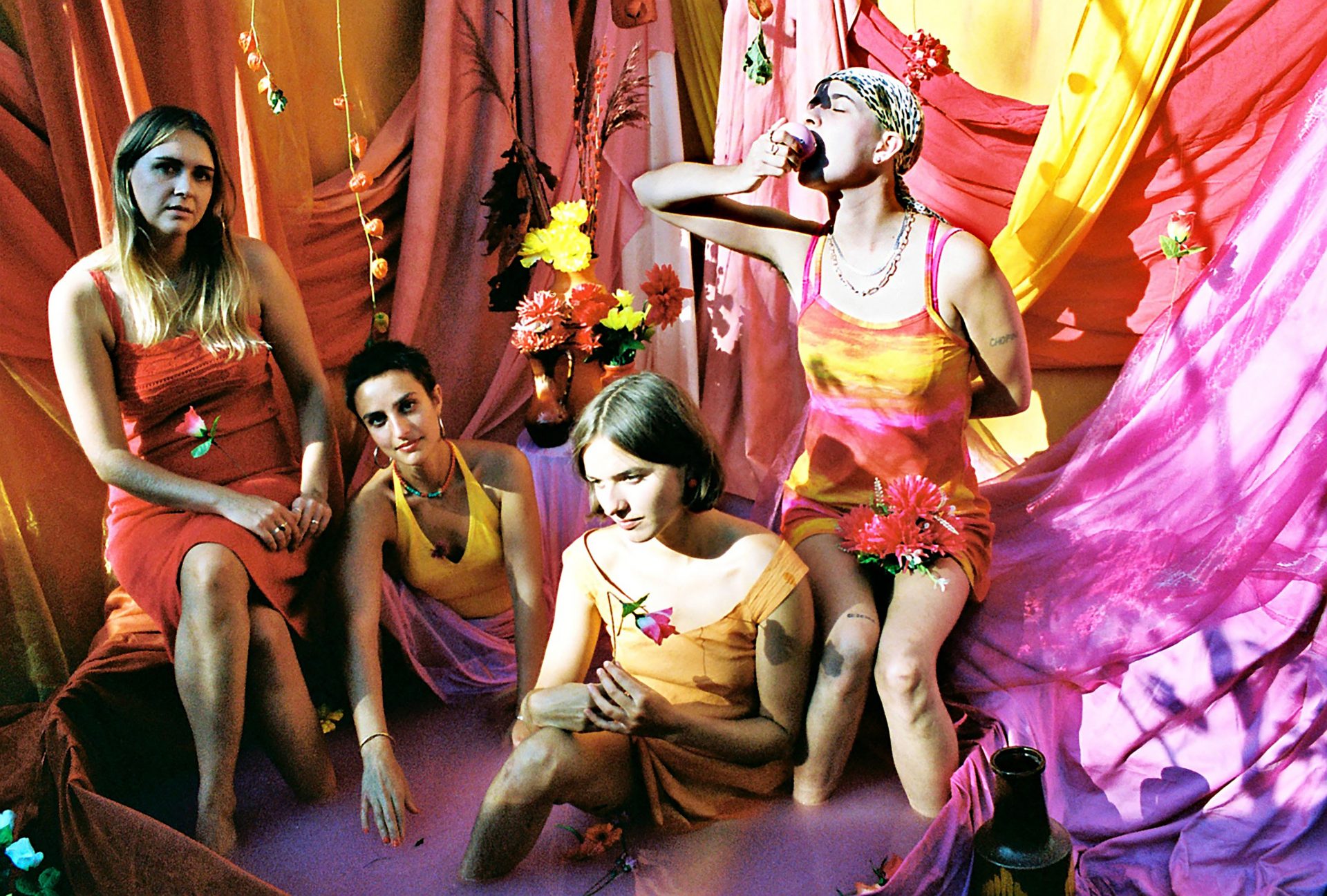 Goat Girl: On all fours

Cult London faves Goat Girl are taking on the world with their much-anticipated second album, ‘On All Fours’.

Even before they released their remarkable self-titled debut album in 2018, Goat Girl’s razor-sharp post-punk was a South London sensation. When the scene hailed them as one of the best upcoming bands around, it was both exciting and a bit suffocating for the foursome. Sticking to their guns, they holed up in Dan Carey’s studio to press personal struggles and growth into their brand-new record, ‘On All Fours’.

Amid the second UK lockdown, three of the dream team – Clottie Cream, L.E.D. and recent addition Holly Hole (minus Rosy Bones, who was otherwise engaged) – jumped on Zoom to talk about all things concerning their second album.

The album name itself, ‘On All Fours’, came as a revelation when Clottie was going through John Barth’s fleetingly-popular 1966 novel Giles Goat-Boy, the story of a human boy raised as a goat, and read the phrase aloud.

“We’d been talking about how we keep playing four-to-the-floor beats, and Lottie thought it was called fall-to-the-floor for ages, which we kept joking about, so it just kind of connected,” Holly explains.

They like to play word games, so the reference means more to them than just the idea that they’re stronger when working together.

“It was also primal, kind of animalistic… I don’t know if ‘urge’ is the right word, but it lends itself to that world. [The book’s] also kind of promiscuous and talks about being submissive or dominant, like sexual as well. It just sat with the vibe of the record,” she adds.

‘On All Fours’ drifts away from band’s previous post-punk political mayhem into a surreal inner landscape. “I think that’s to do with life experience and the places that we are at the time,” says L.E.D.. “On the first record we were 15-17 years old, so there’s a bit of an anarchist, anti-establishment feeling which is quite natural during that time when you want to separate from institutions like school or your family. You’re creating your own identity.”

While their signature sound might now be a little softer around edges, there’s still enough grit and turbulence to it. It’s as powerful as before, but a step on.

“I think it’s weird pop music. I don’t know how else to describe it, because indie-rock isn’t doing it justice really,” Holly says, trying to self-label their sound-shift.

“It’s hard to use one or two words to describe it,” L.E.D. muses, “because there are so many influences, from R’n’B, bands like Broadcast… If you take all the music that each of us listens to, that’s the influence for the music we make collectively.”

“It’s quite post-apocalyptic,” she continues. “It’s ugly and beautiful at the same time. I think a lot of our music has shown the grotesque side of humanity as well as the beautiful and the surreal. In this album particularly, we got a bit more abstract with it, with the references and the imagery, lyrically and also with the artwork, with music videos. It’s all quite surreal. It evokes this kind of dream-like landscape.”

Has lockdown changed the way you approach the creative process?

Wanting to encapsulate that sensation, they took Aidan Evans-Jesra’s drawn characters like Bow and Arrow Lady or CowToy and placed them into their dreary wonderland-based video for ‘Sad Cowboy’, directed by Jocelyn Anquetil.

“It was talking about this strange world outside that was quite surreal, from a perspective of feeling excluded from that and bewildered by everything. The visuals had to have this dream-like feel to them,” Clottie elaborates.

It’s the kind of dream that can quickly turn into a nightmare if you’re not careful where you step. Like every paradise-like place, this one also has its upside down, entangled in the ethereal.

“A lot of record touches on being sort of out of touch with reality and struggling with mental health,” says L.E.D.. “On one hand, it’s like all of the craziest stuff going on inside your head, but then there’s crazy stuff that’s going on in the external world as well and how weird it all is.”

The outside has always seemed a bit of an odd, scary place to be. ‘On All Fours’’ opening track, ‘Pest’, feeds off that primal fear of not being in charge of your fate.

“I’ve been exploring different ideas and images,” Clottie explains. “I guess that in a way, it’s a similar concept to being controlled by someone or something. It’s like the power of religion, the power of the people who tell you about those religions. It’s formed by humans. So, sort of talking about dictatorships, controlling governments that, I guess, have created those religions in the first place.”

‘On All Fours’ is a thirteen-track symbolic journey of self-consciousness and self-discovery that subversively ends on ‘A-Men’, a song of realisation that change is natural and a stay in your comfort zone should be only temporary. It’s a record that flows with such grace that it should be listened to exclusively as a whole.

“I had this playlist on my phone that missed out two of the songs by accident because it just didn’t download them all properly,” admits Clottie, “and I felt like it really missed them. It just needs to have all of them.”

Goat Girl are firm believers in spontaneity and a spur-of-the-moment kind of energy, and to create the coherent sound they wanted for ‘On All Fours’, their method of recording had to be adjusted.

“We had to plan it a bit better because Goat Girl is predominantly a live band and obviously the first album was recorded practically live, so we didn’t want to lose that sense of life and rawness,” explains Holly.

This time around, they stuck to a plan.

“With this album, there was a lot of preproduction,” adds L.E.D.. “Rosy played with an MPC drum machine, which we’ve never done before. The first album is very loose, like rhythmically. This album was very much to the grid which helped with the electronic elements like the arpeggiated.”

In very Goat Girl-style, they tracked most of the songs in a day leaving space for extra layers, synth and experiments.

“Dan put boxes, in the middle of the room, of percussion, so it was really quick,” Holly recalls. “We just had to grab something and not really think about it, and then he picked bits out of that and incorporated that into the songs. I feel like that’s a big part of the sound as well, which was quite unexpected.”

“I feel like his attitude is quite contagious,” L.E.D. grins. “He’d be smiling the whole time, have this massive grin on his face. He’s genuinely so excited which really come through in the music being recorded, it ends up being recorded as well. Just pure excitement.”

It’s not just in Dan that they’ve found support, with the band heaping praise on their local scene, too.

“I think it shaped my view of how music could be and how it doesn’t have to be like a really formulated thing,” shares Clottie. “It could just really be in a sort of embryonic state of it. I feel like a lot of bands we were watching at [South London venue] The Windmill were quite loose and free with their performance. It was all quite lo-fi.

“My upbringing of music was going to classical music concerts, and everything being very regulated. Like, you’re not allowed to clap after pieces are finished and stuff like that. When I entered that world, it was really eye-opening and inspiring.”

They took the best of the world that fascinated them so much and filtered it through their one-of-a-kind Goat Girl power-lenses to create a sound that captured the energy pulsing in the walls of local music pubs and the anger of their inhabitants. The dystopian fantasy they put forward was a complex one, full of gritty guitars and back-alley jazz that escapes narrowness of post-punk and indie gutters.

“From a lyrical point of view, I felt like there was pressure,” says Clottie, “but it’s pressure from so many different angles. It’s pressure from that bit, it’s pressure from people expecting you to sound the certain way. I feel like that’s how music journalism works a lot of the time, sort of trying to box you in with a simplified version of what it is. It’s hard to break out of that once your image has been created for you. I feel like we were almost told what we were, which was Brixton punks, which just wasn’t us at all. We played at The Windmill obviously, but I don’t feel like we were punks. I don’t think that’s what we were trying to do.

“We always write music that we wanna listen to, and that is for us. We manage to separate ourselves from that because, at the end of the day, it’s obviously for people to enjoy, but it’s also mostly for us.”

Accepting an invitation to Goat Girl’s enigmatic world, you must expect the unexpected. Last time it might’ve been anti-establishment havoc, now it’s weird pop, and who knows what beats they’ll be dancing to in the future. Only one thing is sure – it won’t be boring.

Goat Girl’s album ‘On All Fours’ is out 29th January.

Lorde has updated her profile photo on Facebook and yes, this is news

The Horrors are back with a brand new song ‘Lout’, and it’s not at all what you expect