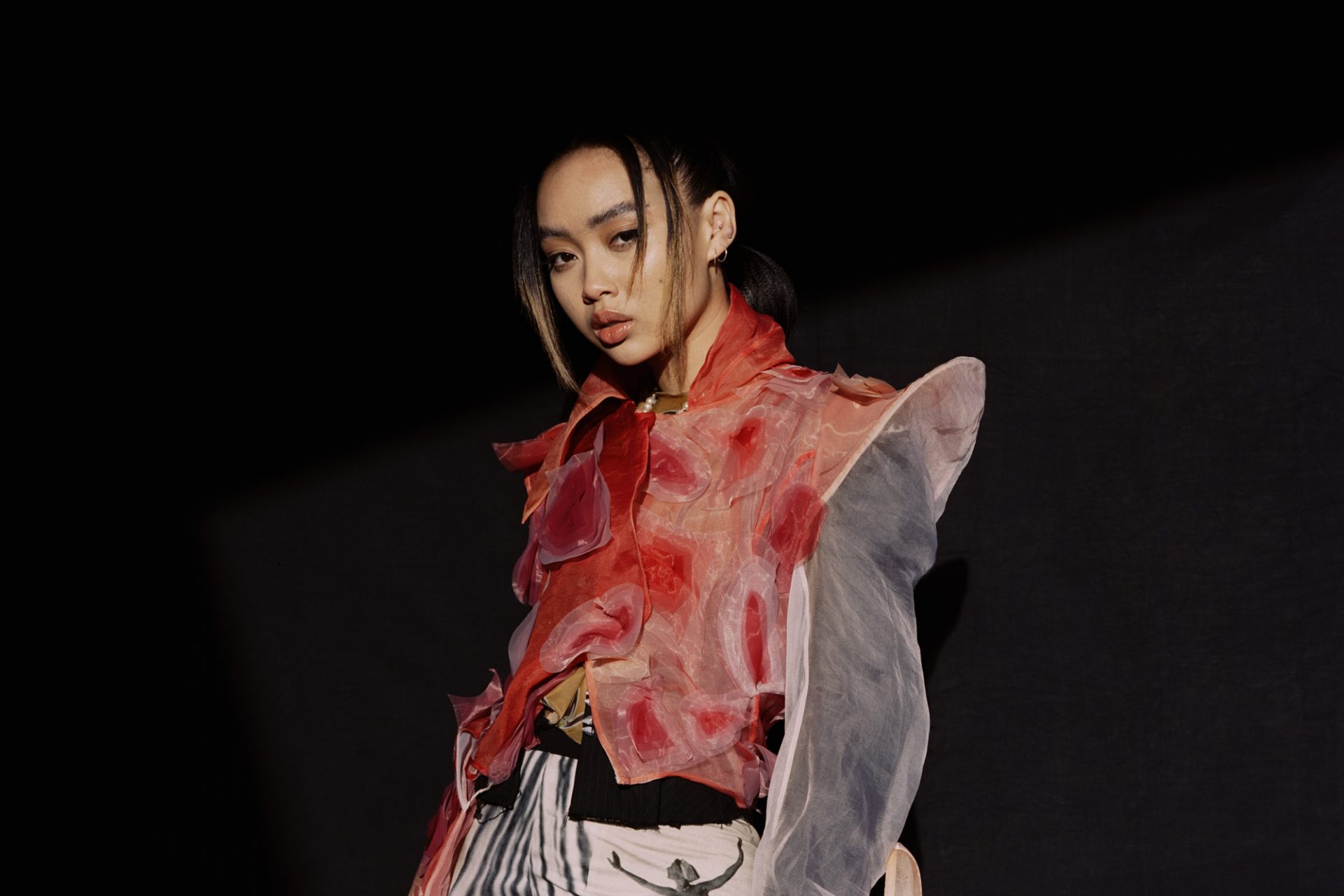 Six months on from appearing on every new year tips list going, and our Griff is living up to the mountains of hype with a BRIT Award and a brand new mixtape.

‘Things just take longer to heal these days,’ sings Griff on the titular track of her upcoming mixtape, ‘One Foot In Front Of The Other’. Healing has never been linear. The past year spent sequestered in our own homes has undoubtedly taught us to treat ourselves with more kindness and patience in that regard. The importance of taking things day by day, step by step, has been more prevalent than ever before, and it is this that Griff taps into on her mixtape. That need to slow things down and alleviate the pressure you put on yourself is captured immaculately. “Even if there’s not a conscious theme, there’s definitely always a subconscious narrative that you’re going through in your head. That idea of one foot in front of the other was relevant whether the song was about my relationship with my family, my love life. The songs about my own insecurities and fears about the future – the same principle across all of them is that all you can really do is put one foot in front of the other,” Griff reflects.

The mixtape’s artwork sees the 20-year-old balanced, arms stretched upon a tightrope, the stability of ground out of sight. “That’s definitely what I wanted to communicate – that sense that you could fall at any point, and there’s a very vulnerable feeling of taking another step and trying to heal and trying to get better, but feeling a bit helpless in that as well.” While most of our next steps thankfully see our feet firmly on the ground, the need to continue is still as prescient. It shines through on each track on the mixtape – it can often feel like a tug of war of emotions, flitting between shattering heartbreak and uncontainable admiration.

That progression towards getting “better” is similarly unpredictable and speaks to those early days of lockdown last year, where the future was even more uncertain than it is now. At that point, all Griff knew she had to do was write. “It was actually really hard to be inspired and feel like I was writing good stuff because I wasn’t bouncing it off of anyone, and I obviously wasn’t meeting people and getting inspired in that way,” she explains. “I was writing a lot of songs, and I didn’t know if they were any good. This year, I’ve taken them all and reflected on which are the best and worked on them – we’ve come out with these seven songs, which I think are the best reflection of what I’ve been writing this year.”

The first glimpse of the mixtape came in the form of ‘Black Hole’ – the synth-heavy, intoxicatingly dark retelling of a heartbreak that viscerally tears something out of you. Having graced radio stations since its January release and surpassed two million views on its music video, there’s no doubt of its enamoured reception. The latest instalment of the track’s success saw Griff take stage at this year’s BRIT Awards, in front of an audience including none other than HAIM, Harry Styles and fellow performer Dua Lipa, to name a few. Needless to say, she delivered an enigmatic performance. “I knew that everyone would go with the glitz and glamour and use the video screens and LED lights and have dancers and do that classic pop look that we’ve all seen. That’s why I wanted to go for something more organic looking, which is why we did the backdrop and wooden structure. I guess the idea was it’s a bit postapocalyptic; everything’s a bit deconstructed, even down to my dress and the fabric. It was supposed to feel very gritty and deconstructed.”

That unrefined element translates to her sound, too. The majority of the mixtape was produced by Griff, and it lends integrity to each track. It deviates from the polished sound pop continually leans into, but it is more enticing for it. Of course, this is compounded by the earnestness with which she sings. “I like to think that my best songs are the ones that feel the most personal. There’s just so much music and content that’s coming out now that I think unless as songwriters we write honestly, and from our own experiences, people see right through it. People know when something is authentic or inauthentic.” It offers a unique chance at connection, regardless of the track’s subject matter – perhaps because they’re all intensely matter-of-fact and brazen. While ‘Black Hole’ languishes in heartbreak, elsewhere, she sings of the jarring intrusion of dreams, but they’re consistently intimate throughout.

The result of contemplating that intrusion is the aptly named ‘Dreams’. A dizzying channel into distortion and jolting percussion, it’s one of the most interesting tracks on the mixtape. “I went away, I got an AirBnB with my friends to write songs, and I just felt like, at the beginning of lockdown, everyone was having the weirdest dreams. Especially when we went away, we were all weirdly remembering our dreams. I think that was one conversation that happened right at the beginning. We sat down to write one of the days, and it felt like a cool concept it developed, and we created a story around that idea of whether it’s your deepest fears and anxieties or an ex – in the day, you feel fine, and you feel like you’re getting on with life and suddenly, at night, when you lose control, that’s where all those things come back to haunt you.” That sense of unease similarly permeates the track – her delivery is scathing at times, despite the otherwise light-hearted beats grounding the track. “What was also cool is that all of the production on that track, we built out of real sounds in the barn – if you listen to the song, it’s all these percussive knocks and clicks that were all just recorded and sampled in the barn.”

Those subversive moments of percussion are recurrent throughout the rest of the mixtape, too. ‘Heart of Gold’ is buoyed by its percussion and swirling vocal samples – it is deeply intricate yet deceptively minimalist. “The song has got to be able to carry with or without production, that’s why I quite like minimal production because it allows people to focus on the song, and the lyrics and melody. I think I always try and not overthink production too much – you don’t want to distract from what the actual real emotion of what I’m trying to say is. That’s how you strike the balance.” Griff asserts. She strikes it perfectly, of course. The immersive, overlapping sounds are intricate and intriguing, but they never detract from the heartfelt core of each track. There are some moments, however, where that production is scaled back even more. ‘Earl Grey’ favours a piano-led track that places her honeyed vocals centre-stage. Its meditation on fear sees her vocals practically fluttering at the track’s close, as she reflects: ‘You’re so scared of ageing faster / so you drink Earl Grey tea because you heard that’s the answer’. “I think you could replace that “ageing faster” line with anything and any sort of fear,” Griff muses. “Whether it’s your fear of failure, your career, any deep fear we have – we can prioritise that almost and it takes over your whole mindset; while so many things around you are probably falling apart a little, your relationships are actually the most important thing. The Earl Grey tea line came to mind because my dad got really obsessive with drinking it because he’d heard it’s really good for cancer, and it’s funny because I think we can get so caught up in these weird things that make us feel like we’re either self-improving or making ourselves healthier and better. But actually, the most important things around us that we need to be taking care of is our family and our relationships.” Again, she returns to the mantra at the core of the mixtape: it’s so easy to get caught up in life and things that don’t matter, but slowing down and appreciating things as they come, one at a time, is crucial.

Even on the tracks with slightly darker undertones, that positive, affirming message shines through her sound – it’s like an unspoken promise that everything will work out, eventually. “Even though there’s elements of sadness, and drama, and darkness to it, I try and always create a silver lining of something that’s uplifting and hopeful.” That talent for finding light and spreading it is something that translates to her online presence, too. Whether it’s asking her followers to pick her outfit for an appearance on The One Show or putting together covers ‘Against The Clock’ with the likes of Maisie Peters and Nina Nesbitt, that sunny outlook shines through. “I try not to overthink social media because as soon as you do that, it can drive someone insane. I think treating it like it is just your mate and you’re just sending stuff to your mate is the best way you can be on social media and make it feel authentic to you.”

It follows through the mixtape completely. The seven tracks are bookended by two seemingly oppositional songs. ‘Black Hole’ introduces us to Griff’s world in that unsettling, heartbroken manner, but by the time the final track ‘Walk’ rolls around, it’s hard to recall the desolation that opens up the mixtape. It’s as though with each track, she weaves a little bit more hope into each beat. As ‘Walk’ plays, it reaches euphoric levels. It’s a perfect exercise in how to make a pop song – electric and relentlessly sunshine-enthused, it practically simmers with pure, unfiltered adoration. “I feel like that emotional journey of starting somewhere dark and ending up somewhere that feels light and optimistic is something that we’ve all kind of experienced in some ways,” says Griff. It is embedded into every listen of the mixtape, if not. By the time the credits have rolled, it’s difficult to shake the extra bounce it puts in your step. It might be subtle, but that silver lining Griff offers glistens.

The sense of Griff which shines through comes from that resounding faith – it’s a self-assurance bound up with the belief that things will be okay. To return to that striking image of her on a tightrope, she recalls the shock she had when her production team hired a Cirque de Soleil tightrope performer for the shoot. “I was like, ‘what the fuck? I’m going to have to do that…’” she laughs. Daunting as it may have been, her own philosophy prevailed, and she found herself suspended in a display of fearlessness that seems natural for someone raised on a healthy diet of early Taylor Swift. “It didn’t matter whether I could or couldn’t do it – it was more about trying to get up and capture that emotion of nearly falling. I think the beauty of that shoot was that we had no idea what the exact shot we were going to come out with was.” That’s the beauty of the journey that ‘One Foot In Front Of The Other’ documents, too. You never quite know in which way your progress will manifest, or what could be around the next turn. You just have to wing it.

“It’s funny because the guy told me, ‘you never look at your feet when you’re walking a tightrope. You always keep your eyes focused on where you’re going’.” For Griff, what is coming ahead looks unbelievably bright. It’s hard to imagine you’d want to focus on anywhere or anything else.

Taken from the July 2021 edition of Dork, out now. Griff’s mixtape ‘One Foot In Front Of The Other’ is out now.