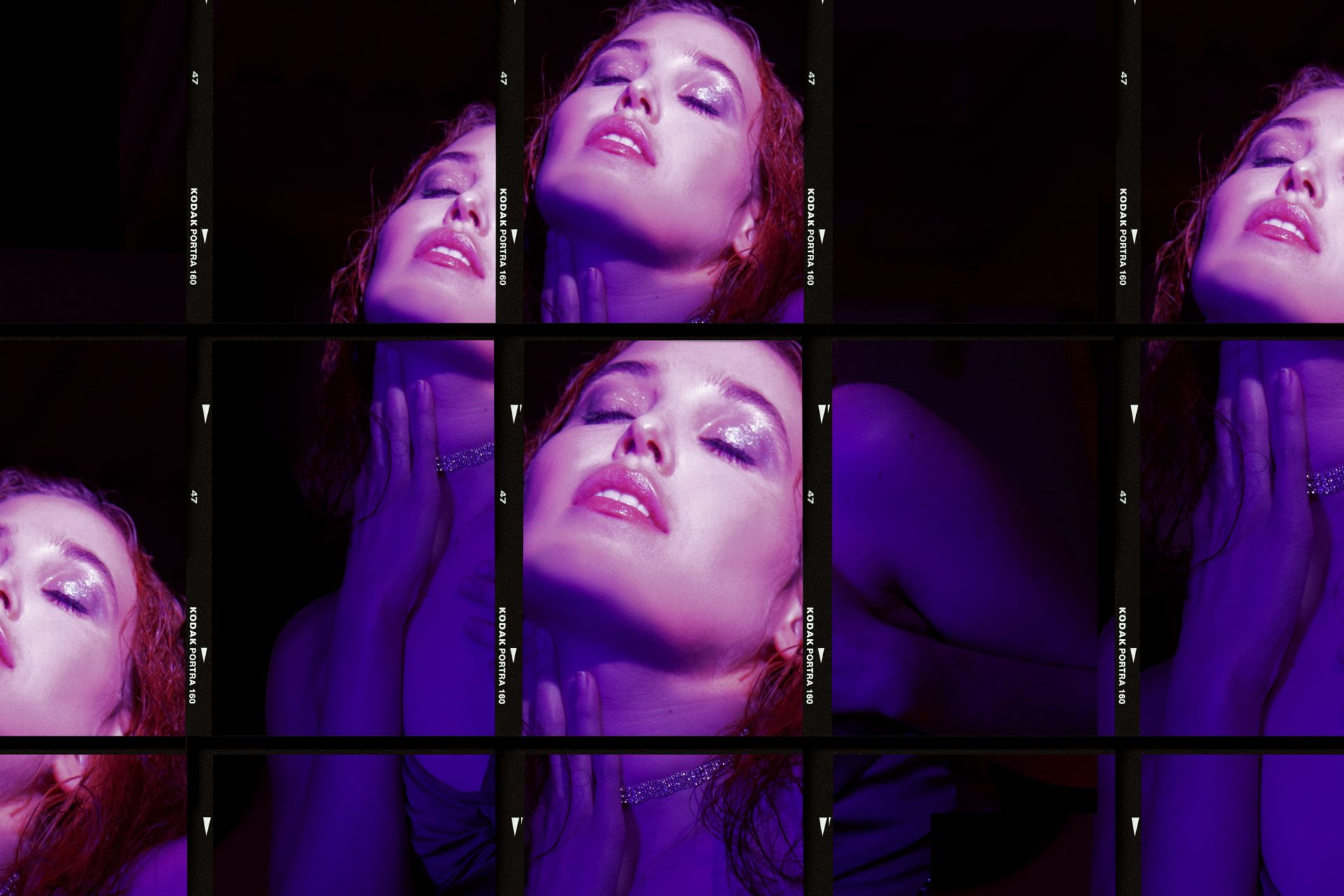 Hatchie: “I felt like I didn’t deserve to feel sad because on paper my life was amazing”

The euphoria of dance-pop and the introspection of a global pandemic meet on Hatchie’s new album ‘Giving The World Away’. Turns out, it works.

The pandemic taught Hatchie the value of a good party. While she obviously wasn’t spending much time socialising over the past couple of years, some big do’s beforehand and the promise of a blowout to come inspired half of the new record ‘Giving The World Away’.

The other half is based on the lull in between, the solitary moments spent at home contemplating life. It was there in Brisbane – where she is today, arriving at her laptop screen just before bedtime after helping a friend host a trivia night – where she created the record.

“I was quite antisocial when making the first releases,” says Hatchie (non-pop-star name Harriette Pilbeam). “The music I was listening to was more like the music you listen to in the car by yourself or in your headphones. In the lead up to this record, and while I was recording – I mean, obviously not during COVID lockdown, but in general  – I was a lot more social. I was listening more to music that you listen to when you’re having fun and partying with friends and sharing the experience with people. I think that affected my music.”

She notes that the last gig she attended pre-lockdown was a New Order one, supported by Confidence Man, which spurred a desire to make dancier music. That show, plus a 2019 summer full of festivals seeing a plethora of different bands play live, left Harriette wanting a piece of the pie.

“I wanted to write music that’s really fun to see live; that’s not just about being sad and alone with your feelings,” she continues. “I wanted it to be more of something that you share the joy of with people.”

So writing commenced shortly after the release of ‘Keepsake’, the minute Harriette got a chance to breathe after touring. The major lightbulb moments came the February before everything went down, in the form of two brighter, bolder songs: ‘Lights On’ and ‘This Enchanted’. Created during a writing session with producer Jorge Elbrecht, they saw Hatchie step out of her shoegaze bubble and delve into what else the 90s had to offer.

Where her sound was previously indebted to the work of Cocteau Twins and My Bloody Valentine, this time around, the references span Madchester, acid house, ‘Ray of Light’ era Madonna, and ‘Impossible Princess’ era Kylie Minogue, all of which find their way onto reintroduction single ‘This Enchanted’.

It’s a delightfully bright bop, grounded in distorted guitars and decorated with an intro reminiscent of ‘Step On’; it’s the bang she intended to come back with. Coupled with her most recent single and opener ‘Lights On’, they pick up where she left off on ‘Keepsake’, taking the top-line melodies from ‘Obsessed’ and the electro groove from ‘Stay With Me’ and cranking it all the way up.

“It was really a big moment for us because I was feeling a little funny. I was unsure about what direction I wanted the album to go in because I knew I didn’t want to do the same thing again. And then when we wrote ‘This Enchanted’ and ‘Lights On’ back to back, it was like this huge moment where I was like, okay, this can be something really special.”

“I wanted to write music that’s really fun to see live; that’s not just about being sad and alone with your feelings”

But as luck would have it, the minute Harriette started mingling more, the pandemic came along and put a stop to it. That’s when she turned inwards.

Like most of us, Harriette found locking yourself up for a year led to a whole lot of introspection. If she found herself questioning her life choices before the pandemic, she absolutely was as it went on.

“I went through a lot of changes with my confidence, and outside of music, I discovered a lot about myself. I’ve changed so much in how I process my thoughts and feelings, approach friendships and my romantic relationship and even my sex life; things like the clothes I wear and my self-esteem have all really shifted. It was really important for me to address all of those things because I felt like I was doing a disservice to myself by just writing about really vague topics earlier.”

These topics manifest in ‘Quicksand’, an existential crisis anthem that embodies Harriette’s career anxieties and creative blockages. Written with Dan Nigro (whose collaborators span Olivia Rodrigo, Caroline Polachek, Carly Rae Jepsen, Sky Ferreira and Conan Gray), she held onto it after finishing it in early 2020.

“I was really struggling with a lot of things, and I was feeling awful about it, especially because I felt like I didn’t deserve to feel sad. Like, I felt guilty for being so ungrateful about my life. Because on paper, my life was amazing.”

It sits beside the titular track ‘Giving The World Away’, which literally questions our life’s purpose as she asks, “What is it that makes us feel so invincible? Could you regenerate all you’d hoped for yourself? Could you start again?” in succession.

Between the singles, the album tracks slide between both sides of this spectrum. There’s the pure euphoria of ‘The Rhythm’, an enormous synth-driven dance track that feels as confident as its lyrics, there’s ‘Take My Hand’, where Harriette addresses the self-esteem issues she found herself battling, ending on the sky-high ‘Til We Run Out Of Air’, it’s the point of the record that pushes our post-pandemic dread aside to make way for hope.

“The album starts off really excited, and then it goes through this rollercoaster, and you’re not sure where it’s going to end up – whether it’s going to end on a sad note – but then it picks back up with ‘Til We Run Out Of Air’. It’s a really hopeful song; I think we are trying to convince someone that there is more to life than how awful they’re feeling and that things can get better.”

The love songs she became known for writing aren’t gone for good, though. Created at home (hard to believe considering how huge the record sounds, but really it was, hop over to her TikTok to see footage of them recording in the ‘fancy studio at home’) with long time collaborator Joe Agius, who she married at the Graceland Chapel in Las Vegas last year, tracks like ‘Sunday Song’ feel obviously dedicated to their relationship.

“It’s cool. It’s definitely amazing,” she says of working with her now-husband. “Living together means everything gets done really quickly, and you can do it in the moment when you really want to do it. We just understand each other so well because we’ve known each other for nearly a decade that we almost have a shorthand. We get the references each of us is making, and we understand what each of us wants to get out of a song.

“We have a really similar work ethic when it comes to motivation to work on the project. It means everything to both of us. You can feel quite exposed sharing personal lyrics with somebody, but I don’t feel that way because we know each other so well. I feel like I can say anything to him. I can write any lyrics and not feel weird about it.”

Although Hatchie is largely known as Harriette’s solo project (although she admits she doesn’t know whether it’s a solo project or a band), it becomes apparent that ‘Giving The World Away’ is a collaborative effort, Harriette noting that this time around they just wanted to do what was best for every song.

Joe also takes the reins on the visual front, which are stronger than ever. Retro-futuristic music videos and a fairly obvious nod to Baz Luhrmann’s Romeo + Juliet on the album cover make for a darker, more grown-up version of their past work. Much like the record, the visuals are mostly DIY’ed, but you’d be forgiven for thinking they had a main pop girl budget. When Harriette is in the back of a stretch Hummer singing about her quarter-life crisis in the ‘Quicksand’ clip, she’s every bit a pop icon.

“I thought it was important to show that dichotomy, I guess, and just accept that I’ll always have both of those parts of myself. I’ll never completely erase the anxious version of myself, but I can have that confident version of myself as well.”

Amidst all of the uncertainty, Hatchie has never felt more in control. ■

Taken from the May 2022 edition of Dork, out now. Hatchie’s album ‘Giving The World Away’ is out now.

Niall Horan will drop his new single ‘Heaven’ next month