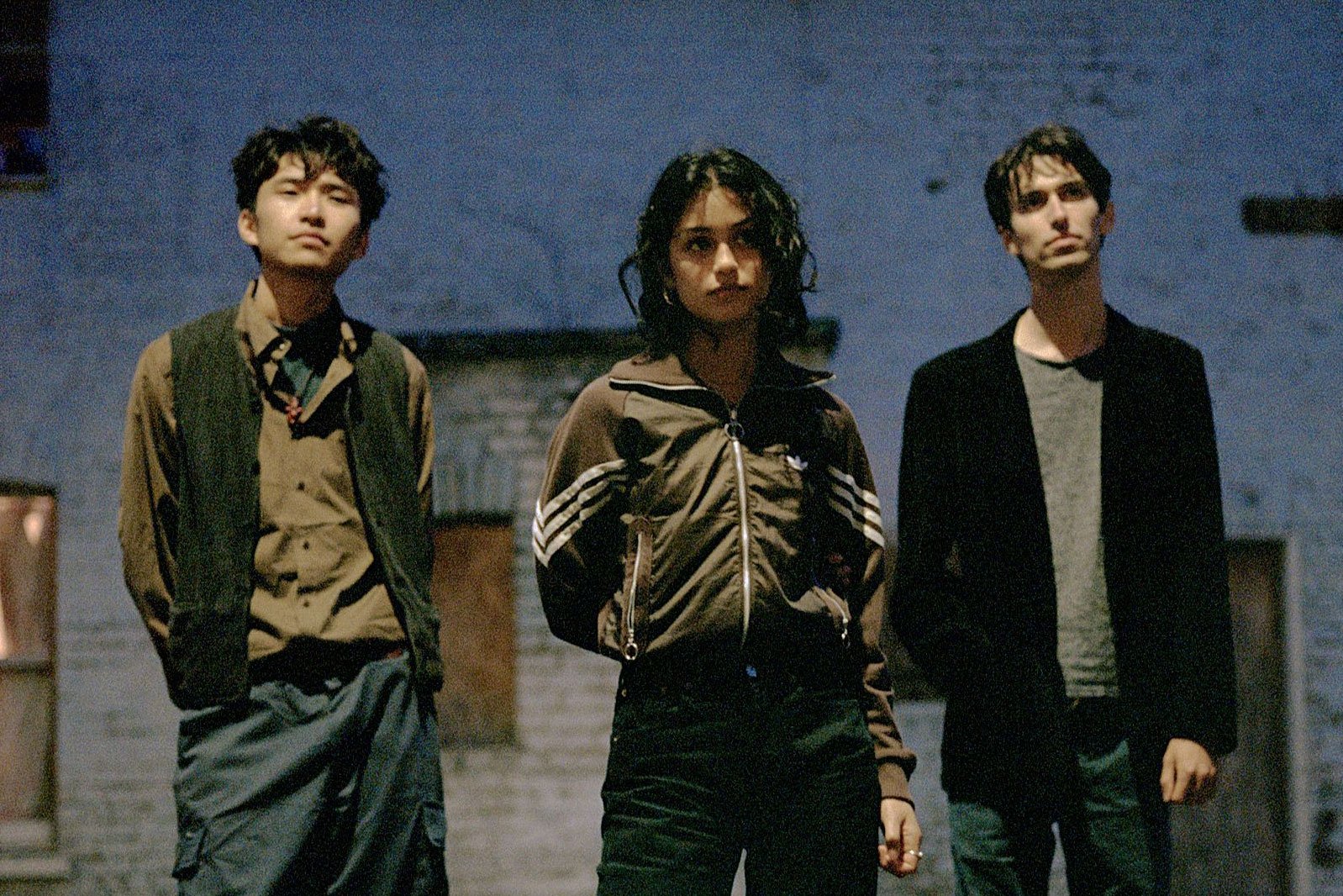 Honeyglaze: “Just go with the sound”

With their debut album about to land, something’s smelling good for Honeyglaze – and it’s not the bins.

It’s a lovely Wednesday evening, minutes after London trio Honeyglaze have dropped their most recent single at the time, ‘Female Lead’. After all the Zoom introductions, bassist Tim Curtis gets straight down to business, addressing drummer Yuri Shibuichi. “Yuri, you got a new smell?”

“I went out of my house, and I smelled something really nice,” Yuri explains. “This, like, barbeque? I look around the corner, and there’s a garbage truck.”

We’re already being welcomed into the club as a fellow sufferer of phantom smells, while Tim describes a ghostly pong that has followed him around since a nap he had earlier.

Through some masterful segueing, we’re quickly past the odorous conversation and onto their broody, brilliant self-titled debut album – something the band have jumped straight into without taking that industry-approved standard route of releasing an EP first. Lead vocalist and guitarist Anouska Sokolow confesses: “That was Dan!”

“We self-produced an EP, and then we were gonna get someone to mix it,” says Tim, “but then he was like ‘I saw your live set, let’s just make an album.’”

The Dan in question is Speedy Wunderground producer and indie-rock svengali Dan Carey, who picked up Honeyglaze after seeing their live session for FarmFest on YouTube.

It was a big step for the band. “We were fucking terrified,” Anouska laughs. “We were like, ‘We only have like seven songs, how are we gonna do that?’” Of course, they pulled it out of the bag, ending up with an eleven-track debut that flows with the cohesion of a live set.

“We were gonna do it a couple of weeks after he met us at first, so that was really scary,” Tim explains. With the band having formed not long before the first lockdown, things were moving with breakneck speed. “We managed to postpone it after another wave of Covid, and then we had a few months. Then it wasn’t so scary.”

Their origins remain enigmatic, with previous interviews suggesting a fateful encounter on an ice rink in which Yuri removed Anouska’s larynx with an ice skate. When we indicate the story seems a little far fetched, Tim is insistent, “That’s how life is.”

“That’s actually a common misconception. We met at circus school.” Anouska clarifies, which would explain their proficiency in juggling pensive tones with playful lyrics on the album.

Straight out of clown college and with a few months of live shows under their belts, Honeyglaze were quickly plunged into lockdown in 2020. “We’d only just got into the swing of things, really,” Anouska recalls. “It didn’t feel too crazy because it was almost too good to be true.” However, Yuri seems more optimistic, describing it as an opportunity to hunker down and write music, working on a solid foundation that they would lay down live when things opened back up.

Where most bands hone their craft with a live audience, Honeyglaze worked in reverse, refining their sound in isolation. The benefit is crystal clear in the record’s intimacy, where each song plays almost like a confession of a hidden feeling or embarrassing story. It’s the same energy as the whispered conversations of a sleepover at 2am.

That might be thanks to their rehearsal and writing process, which saw the band playing for eight hours a day in the dark to set the tone. Tim sums it up nicely, “We’d get food and get really, really silly.” “Eat loads of sweets, get really hyper,” Anouska adds gleefully.

It makes for an album packed with fun. For every ounce of drama, there’s an equal measure of levity, too. Even when touching on co-dependent relationships in ‘I Am Not Your Cushion’, there’s an air of playfulness that comes from its casual delivery and hazy bass noodling.

Like so many bands that weave between genres leaving the resulting sound is almost impossible to categorise or define, Honeyglaze have occasionally found themselves dumped into the post-punk blur. “I do find it funny when we get put with the Speedy bands.” Anouska posits, “People hear ‘Speedy’, and they’re like ‘Ahhh, Black Midi!’” As they put it, genre isn’t a concern when making an album. You just go with the sound.

“Someone did a review of ‘Creative Jealousy’ and said ‘the newest in guitar music’, but there’s no guitar on that track,” recalls Tim. Anouska laughs, “I forgot about that! Not a single guitar on it!” When asked what they would call their music, the band pause before Anouska offers “Epic” with absolute confidence, quickly followed by an embarrassed, “What the fuck…?” from Tim.

With the album recorded in a flash over just five days in April 2021, Honeyglaze haven’t sat idly by waiting for its release. They’ve just finished a UK tour with Lounge Society and are gearing up for a slew of dates supporting Wet Leg before a headline tour of their own in the summer. Not to mention Green Man, which Yuri exclaims when asked what they’re most excited for. “It just happens to be one of the best festivals around,” Tim insists.

It’s hard not to admire their fortitude while things move into hyperspeed, but after waiting a year for the album to be released, they’ve gone through every emotion. “The first two months after we did it, it was like, ‘Come on, I want it out now!’ It feels weird that it’s finally happening,” Anouska says. With the release looming ever closer, Yuri’s feeling the excitement. “Thinking that ‘Female Lead’ is out today and in less than two months the album is gonna be out, it’s such a great feeling.”

Honeyglaze continue to grow and develop. Even in the run-up to the record’s release, they’re recalibrating their creative process. “Before the album, I was writing the songs and then bringing them to the boys and arranging it together,” Anouska explains, “but now we’re doing a lot more stuff more communally.” You can’t help but get excited for more “epic” music that could be on the way after Honeyglaze’s debut.

Whether you fancy their heartfelt bangers, light-hearted lyricism or their fiery passion for new smells, Honeyglaze are bringing the best of all worlds. ■

Taken from the May 2022 edition of Dork, out now. Honeyglaze’s self-titled debut album is out 29th April.