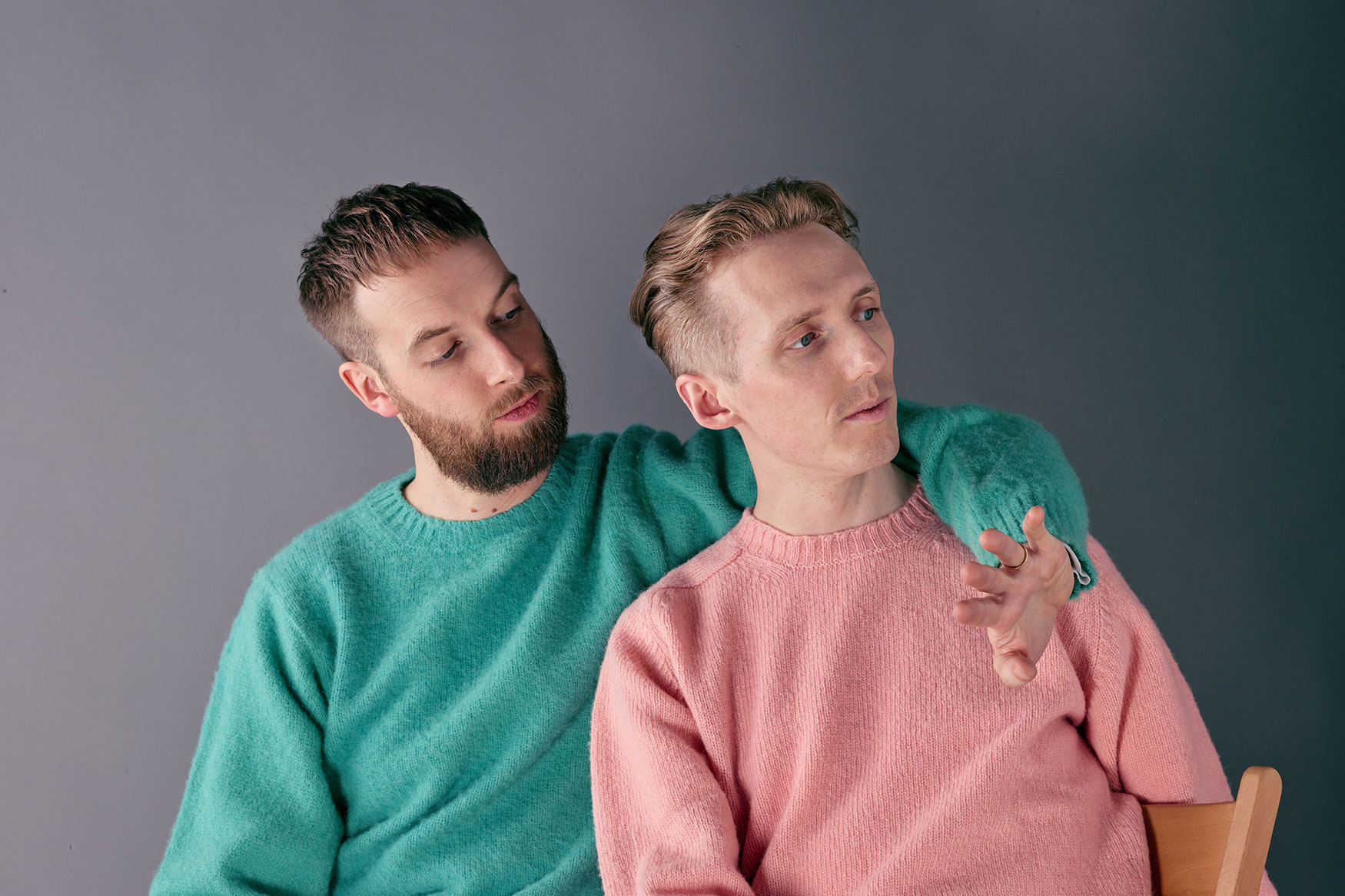 HONNE: “You’re only as good as what you do next”

HONNE are back with their third full-length ‘LET’S JUST SAY THE WORLD ENDED A WEEK FROM NOW, WHAT WOULD YOU DO?’ – mouthful of a title, but easy to swallow with their free wheeling alt-pop perogative.

After a brief detour into raw, soothing acoustics with 2020’s ‘no song without you’ and its ‘dream edits’ rework, HONNE are embracing their quirky pop energy once again – and taking it to new heights.

Five years into a career of electro-romance bops, the duo – comprised of Andy Clutterbuck and James Hatcher – are unafraid to embrace the moment. While their futuristic, heartfelt tunes have become a staple, they’ve recently ventured into lo-fi soul with mixtape project ‘no song without you’ and a raw rework of ‘dream edits’ that sought to calm rather than energise at a time when people’s thoughts needed a slowdown.

“I’ve been wanting to do stuff like that for a long time,” shares vocalist Andy. “It was nice to write songs on an acoustic guitar, stripping the production right back.” Fellow producer and multi-instrumentalist James shares similar sentiments: “Taking acoustic elements but using production to make those elements sound old and vintage, like they’ve all been recorded to tape, was a fun challenge. It came at a good time during the pandemic when people needed a bit of comfort and reassurance.”

Moving forward, it’s clear this new experience has invigorated the pair. “It taught us that we should stop worrying about things and just enjoy making music. It definitely helped us feel more confident that we can give our ideas a shot and people will follow us along the way,” James reflects. With a solid fanbase – dubbed the ‘HONNEtourage’ (amazing) – following each and every step, the electronic musicians have learnt that they can birth projects that live by themselves. “Even though musically things can change, the theme is still positive, romantic music about love,” Andy adds. “Whether it’s acoustic, electronic or poppy, people will still be able to enjoy that same underlying message.”

The newest project from HONNE comes in the form of upcoming third LP, ‘LET’S JUST SAY THE WORLD ENDED A WEEK FROM NOW, WHAT WOULD YOU DO?’ While it hardly rolls off the tongue, the words sound slick when consumed as part of title-track ‘WHAT WOULD YOU DO?’ which was penned pre-pandemic. “We were none the wiser, and these words were plucked out of my brain as an interesting question that would spark a conversation,” Andy says. “Obviously, since then, it’s become a lot more serious, and for some, it does feel that the world has ended. The whole album was born from that idea, and here we are.”

Featuring R&B singer-songwriter PinkSweat$, the song takes the band’s slick structure and production to new heights. “It is poppy, but with HONNE’s twist – we’re never going to go full-on pop. It’s got all the quirks and charisma that our music normally does, but is also one of our most collaborative projects to date,” the singer offers.

“We wanted to make the biggest, most interesting songs possible”

While working with pals is always fun, the creative benefit of these ventures is clear across this record, with this first collab being a prime example. “We had written a verse before we asked [PinkSweat$], but when we asked him to record the verse, he said no,” James recalls. “’I don’t really sing verbatim’, were his words. So we said, here’s a blank verse, do what you want. What he sent back completely changed the song’s trajectory and took the song on a different journey – ‘WWYD’ is a better song because he had free rein.”

In such a competitive field, it can be easy to slip into jealousy when eyeing up the streaming numbers of your peers. Fortunately, the humble members of HONNE naturally find themselves prioritising their own development. “There will always be people getting more streams and on bigger playlists, and there will always be people getting less,” James comments. “It’s important to stay focused on the positives. Music should be about the art and enjoying the feeling that it gives you, rather than stats.”

“It can actually be quite motivating if you see people doing well – that’s great and should be celebrated. It inspires us to try new things for ourselves; to try more, do more, achieve more,” James says cheerfully. This upbeat and optimistic attitude is an essential part of the close friends’ careers, and it is admirable to see it in action.

As well as invigorating their own horizons with the contributions of others, team HONNE are ensuring growth by, paradoxically, learning to care less. Andy says that, “for the first two albums, we thought they had to be super cool. This time, we scrapped that, and wanted to make the biggest, most interesting songs possible that were satisfying to listen to.” James resumes this train of thought: “We want the choruses to be big and give you goosebumps. When we play them live, we want people to yell them at the top of their voices because they’re excited, and it sounds massive.”

With ‘Warm on a Cold Night’ and ‘Love Me/Love Me Not’ already forming their own legacies, work has been put in to ensure that this third offering can develop its own unique identity within a growing discography. “It’s important that each new release has its own vibe and story that people can get attached to specifically; that’s how we’ve grown up with music,” James states analytically. And as for how they process the success of such vibes? “We never really feel successful, so there isn’t much to process,” he half-jokes. “The numbers look crazy, and we think they’re really good? You’re only as good as what you do next, really. If we had a song on this album that got 50 billion streams and was the biggest song of the year, my viewpoint would be: now I have to make a song that equals that. That’s almost a worse position to be in!”

The balance of perspective – inward and outward, optimistic and realistic – is a driving force behind the success of HONNE. Andy and James are the Yin to each other’s Yang, and their subtle difference has had ever-present but unforeseen benefits. “He’s an internal processor; I’m an external processor,” James explains. “Andy’s an introvert; I’m an extrovert. That combination allows us to complement each other’s attributes. When Andy’s down and needs picking up, I can help with that. If I’m going nuts and getting stressed, Andy can bring me back down to earth.” Andy quips: “It’s a happy coincidence that we met.”

Such a meeting has now resulted in an inspiring and energised LP with a clear message. “Wherever you are, this album is trying to symbolise that there is a light at the end of your tunnel, and things do get better. Hopefully, after your first listen, you’ll feel a bit of love, a bit of positivity, and know that things will always get better. The message is always love and will always be love, because that’s all that matters in this world.”

Taken from the November 2021 edition of Dork, out now. HONNE’s album ‘LET’S JUST SAY THE WORLD ENDED A WEEK FROM NOW, WHAT WOULD YOU DO?’ is out now.