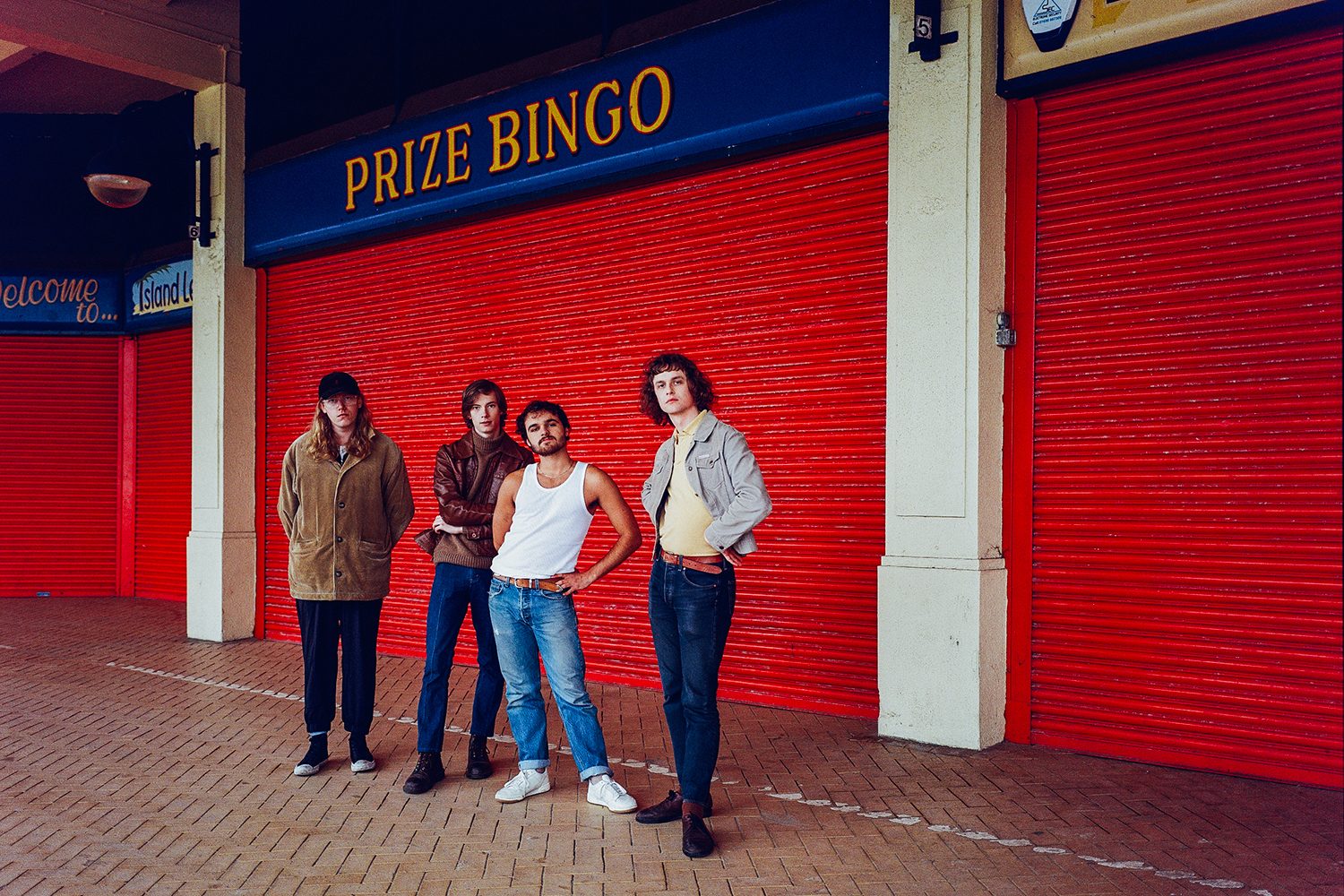 Tom Rees from Buzzard Buzzard Buzzard may be the most honest man in rock’n’roll. In amongst “ripping off T-Rex songs” and “licking John Lennon’s arse” – and a second national lockdown – his band have made lemonade out of the very bitter lemons of 2020, embracing the time off to really get their creative juices flowing. Producing as much content as possible has always been important to them, and after a productive year, they’re teeing up for a big 2021.

Welcome to lockdown 2.0, will you guys be doing anything different this time?
It’s felt a lot less lockdown-y. Like, Greggs is still open. I’ve been coming to the studio on my own to mix stuff; we’re working on an album. I’m in a very fortunate situation, I understand that there’s probably not a lot of musicians that have a space that they can go to. They probably just cooped up inside their homes, which is not the greatest thing. But we’ve been quite fortunate.

You’ve just released’ 30,000 Megabucks’, was that track intended to open discussions about dodgy practices in the music industry, or was it more to purge you of pent up anger?
It’s the kind of the song that exists in this weird, ironic space where we’re talking about how horrible the industry is, when really, we’re functioning as part of it. The concept of owing people money is one of the strangest things. It gets really depressing, but I kind of just thought whatever, I’ll just be in debt. The sad thing about it is that we didn’t get any backlash from it, and I kind of wish we did. The guy in the company I wrote it about probably doesn’t even know. He’s sat on his yacht somewhere. Having a glass of fucking bucks fizz. He’s got no idea.
I’m not a conflict guy anyway, so that’s a good thing. Passive aggression, I think they call it.

What an apt time to release a song to ‘take down the man’, when we’re all being encouraged to re-train.
Yeah, that’s really interesting. It could apply specifically to what’s happened to the music industry itself, and probably other creative industries as well. In the beginning of lockdown, I thought, maybe just maybe all the big labels or big publishers, and big agencies, will realise that they’ve got no more work for the next two-ish years, and they’ll be like, “maybe we should actually pay musicians and artists, these are our lifeblood, as soon as these guys can’t do anything, we then can’t do anything”. But unfortunately, what’s happened is that the responsibility of all these things has fallen in on the artist.
For instance, previously, it was enough to get a press day, or do a photoshoot. Now, you’ve got to be able to handle a camera. You’ve got to be able to shoot a livestream. I think it addresses that area well, of how artists continuously adapt to what seems to be this strange free-market economy, but free-market economy of the musicians and not of the music. Today you find people buying into the music industry as a whole and how good they are at TikTok or whatever.

“Passive aggression, I think they call it”

Your virtual gig, The Beautiful Show, sounds exciting – how will a classic Buzzard Buzzard Buzzard show translate in a virtual format?
I’m very excited about it. It’s going to be held at Portland House in Cardiff, which used to be an old bank. It’s very lush, very big with all marble walls. Very fucking decadent for a rock show. We’ve got some guests coming down as well, making appearances and stuff. We’ve got one really fucking insane guest, who I just cannot believe is actually happening. It’s very cool. I wish I could tell you, but I feel like I’m in like the next Avengers, like I’m holding in that Iron Man died or something.

If there was one thing you’d want listeners to take away from your music, what would it be?
Being a musician is usually wrapped up in the idea of egos, the idea of “me”, and I think this is an instance in which it is really easy to give a dishonest answer. Just to say, ‘Oh, I hope they just enjoy it’. Every musician whenever they write music or release music, they’re always thinking of some legacy: ‘Am I gonna be remembered? Am I gonna do this?’ And so I think that’s the primary thing for me. I got a really emotional reaction when we first did the EP, and it came back as a physical copy. It was this idea of legacy that had me thinking, ‘Well, I know that this is in my hands right now. And if in 50 years, this is in some granddad’s basement somewhere, and some grandchild finds it, then I’ve done it’. That’s the primary function of creating music, to stay out of place in history a little bit. That’s sounds fucking huge, it sounds like a massive thing to say.

What can we expect from Buzzard Buzzard Buzzard in 2021 – where is the band going, what is the band doing?
Just playing as much as possible, there’s been such a drought that I find myself fetishising shows in my dreams, just imagining the first gig back and how amazing that is going to be. We’ve always felt like whenever we’ve gone on tour, it’s never been enough shows, we’ve never been ready to go home, and we always want to do more. And ideally, we want to be on the road 300 days of the year.
For some reason, going on tour is the only time I actually feel like I’m doing work as a musician because all the rest of it is just getting pissed and just playing music with your mates hanging out and being in a band. And getting out on the road is something that actually feels like good honest work, you know? Because I always struggled to justify having a studio and just recording music all day, when there are builders who do manual labour in some really honourable profession, and I’m just always in here playing chords to myself.
Just you watch, next time I speak to you, I will have been on tour for like two years straight and just dreaming of another lockdown for some time off.

Who would be on your Hype List for next year?
There’s a band I’ve been working with in Cardiff called SHLUG, and they haven’t released a single song yet, they’ve got them recorded and ready to go. But they’ve just got an online presence which I’m told in this day and age is a really hot thing to have, like Black Country, New Road have, that vibe that says “We’re online, we don’t have any music out yet, but just trust that we’re cool”. They’re like one of the heaviest bands that I’ve ever heard in my life. I used to play drums in doom rock bands when I was younger, so it kind of fulfils this strange part of me. They’re really, really good. Lots of great energy. Whenever things sort themselves out and life sort itself out. There’ll be crushing around the UK, no doubt.

Fletcher has announced a headline North American tour for early 2022.