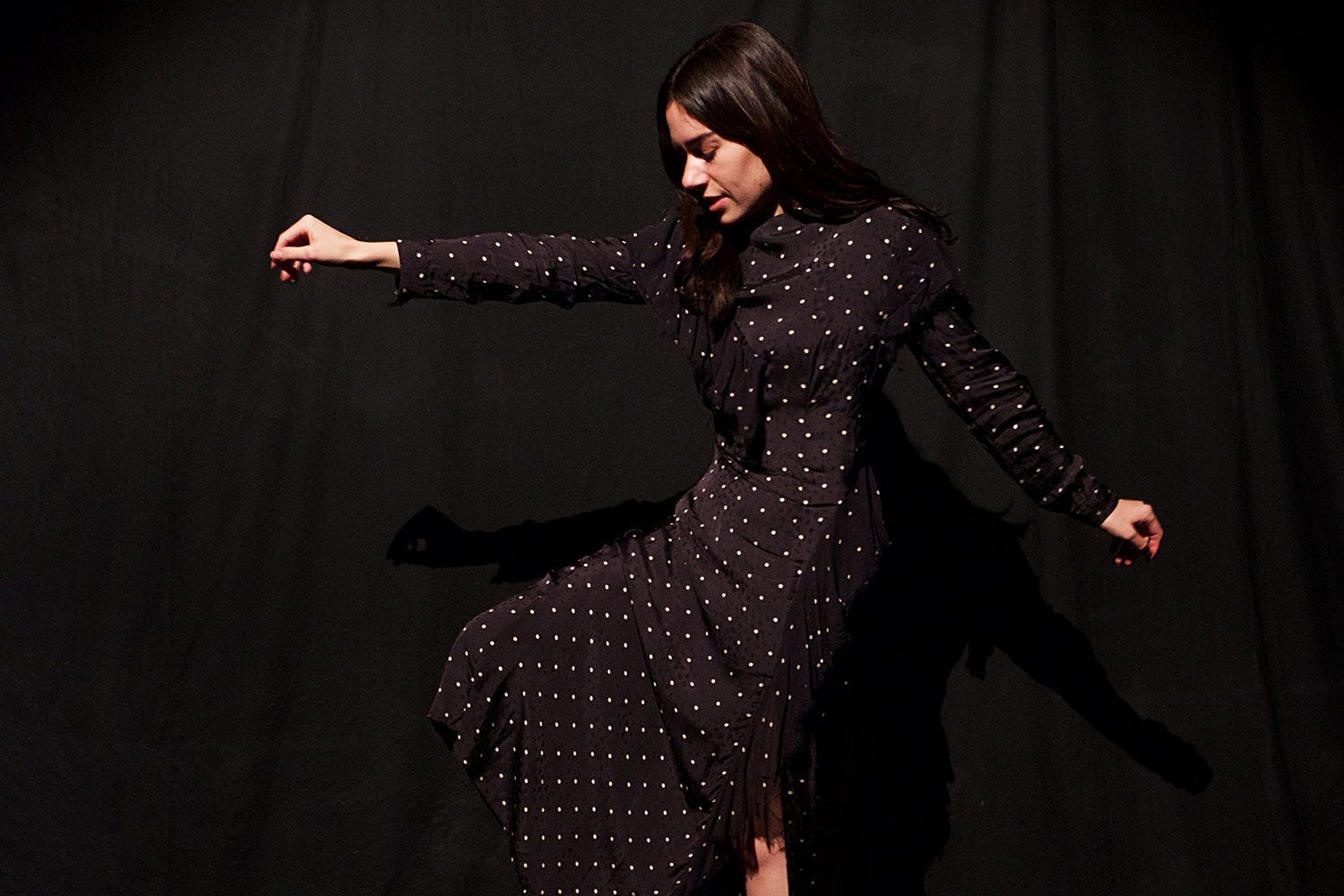 Sinead O’Brien is at the forefront of a new wave of Irish poets.

In her creative life, Sinead O’Brien often faces a choice between two options. Fortunately, she’s a dab hand at having her cake and eating it too. By day, she’s a senior designer for endlessly renowned fashion provocateur Vivienne Westwood, while by night she’s a post-punk poet, drawing acclaim from everyone from John Cooper Clarke to Speedy Wunderground’s Dan Carey. That embrace of two sides, of yin and yang, seems to date back to one simple choice she faced, day-in, day-out throughout her upbringing. It’s a question most teenagers probably ask themselves at one point. Vivaldi, or The Beach Boys?

“My mom had like a tiny little Ford Puma, do you know those cars? It was in the 90s. It looks like a cat, but it was silver. She only had a tape player in the car, and two tapes that she owned: Vivaldi and The Beach Boys. So every morning on the way to school, I had this great choice of which to listen to. I think it was the perfect smash of references – Beach Boys or Vivaldi – equally on this light, high headspace. It’s like the scales of justice.”

Sinead’s own work might not immediately call to mind either Baroque classical music or 60s chamber pop, but there is something she does share with Antonio Vivaldi and The Beach Boys’ Brian Wilson: an ear for composition. Taking up the piano aged 6, her first brushes with music were rigidly classical, a direct inverse of the tumbling energy of her recent output. “I don’t think any of that went into the music itself. It was maybe the piano teacher I had who had such an effect on me, and on the rigour and the discipline in my approach to working. There’s an element of conducting the band as well; I really love that role.”

Several moons on, and a few diversions later, Sinead has dropped the piano and dropped her first EP, the excellent ‘Drowning in Blessings’. Now, her eyes are trained on further experimentation. “I’m never really happy to sit where we are, we’re always like trying new things.” Like Brian Wilson, Sinead is as much the lead singer of her outfit as the driving creative spirit, curating mood, theme and pace. “I’ll have a set of lyrics ready, and then Julian [Hanson, guitarist] will just do some sketches. He’ll send four or five different ideas. It’s not really random, it’s kind of hard to explain. We’re quite connected, quite deeply connected, me and Julian, so when I give him a reference, there’s a lot more to it than what I say that day. He knows more than what I’m telling him.”

It’s those lyrics that have set Sinead apart as such a striking musician, and cemented her place as a worthy entry on Dork’s 2021 Hype List. Her half-spoken, half-sung style is “just the way it comes out”, though the technique reaches far further back to a tradition known as “sprechgesang”; literally, “spoken singing”.

“That’s an ancient word, actually. I’m always reading about Greek mythology. The most ancient Greek and Roman plays had music behind them, and then lyric poetry emerged from that. It just isn’t the most popular method of creating music right now, but it’s not really a new system or anything. It’s kind of fun for me to discover that there were roots there, as far back as that: maybe before song, who knows? I think people were speaking before they were singing, right?”

“I’m obsessed with cello. I feel like I should put an ad on the bottom of this like, call me if you play!”

If the twin choice of Vivaldi or The Beach Boys provides part of the bedrock of Sinead’s approach to music (though she’s taking more inspiration from David Byrne’s book How Music Works lately), then the daily nature of that decision drives another key part of her creative process: repetition. “We had years and years of the same choice,” she says, referring back to her school commute. “Which I think, that repetition, it’s my own torture. I love to repeat phrases or songs or music. That was my first lesson in repetition in music.” It’s no surprise that each line at the start of ‘Most Modern Painting’, the first track on ‘Drowning in Blessings’ leads with the phrase snippet “This could be…” Through repetition, Sinead hones in on the ambiguity of language.

“Repetition in habit, in daily habit – I do find it quite soothing. It’s almost like if you visualise it as a circle, and every time you do the repetition, new meaning emerges. You revisit a place, and you revisit it differently. You, yourself, are different, and the place itself is different. When you look at an atomic level, nothing is ever the same. Like at any time. Repeating is how you re-experience things differently with what you’ve learned or how you’ve grown. I’m a really strong believer that the words aren’t all they mean. How you say the words or how you intend them to be – you can really load them.”

Still, it’s significant that Sinead made a quick reference to repetition as torture. It’s hard to talk about routine and cycles of behaviour in 2020 without acknowledging the totally unprecedented, but mostly deeply boring cage we’ve all been rattling around. “I made it my task to adjust myself to the indoor-ness, like everybody else, and come up with a whole new world of routines. I put imagery that I loved, and that was inspiring to me and things that I’d never seen before all over my wall, so that separate to work I had windows into different avenues I might write about, or things I might dream about,” she says, framed against those same bedroom walls for our Zoom call. “The feeling of other places is really important to keep connected to. There are other places; it’s not just your bedroom.

“I think it’s about finding new routines and not flitting around too much. This is the thing: in lockdown, you feel like everything and nothing is possible. You have an amazing opportunity to write your life story, but you also have… not. It basically balances out more or less the same as before, because you can go nowhere, but you can do everything. Try making sense of that.” In many ways, the first lockdown represented another split path, another double life with a new set of habits. For Sinead, those new routines centred largely around roaming the nearby nature reserves and marshes, something she’d never really been into before. “I found that really, really great. I think this time around what I’ll do differently is… I’ll try to walk further away. I got so sick of my morning walk; I got so sick of it. But, in the autumn, everything looks different.”

It makes sense for a songwriter who’s as much a poet as a singer that her writing process is driven by observations, both personal and of the natural world. In fact, she’s just gotten back from a spontaneous solo trip to Newquay (“It was kind of like Agatha Christie Goes Surfing – I was just writing a little bit every place I went”) in what will probably end up being one of the last flashes of freedom before 2021. The importance of serendipity in these moments shines through. “I met a fox the other morning. It was great! He was running and jumping in all these puddles, and when he saw me he was like, huh? It was a really wild fox, like a really free one. I was looking at him, and then I hid behind a piece of wood. I looked back out, and he was looking to see if I was still there, and then I was like… ‘I am still here’. It was so great to have this conversation with an animal. So yeah, anything can happen.”

And while those new routines may have opened up new creative pathways, when we ask what one thing she’d most like to see return in 2021, Sinead is quick to answer. “Live music. I said that like it was such a breath of fresh air, or a sigh. If I hope for that and wish for that, then it would already mean that other things are in place. It’d mean that friends and family can already see each other, and that things are more up and running, and probably there’s a vaccine, and all of that other stuff that really does matter, too.” She pauses, before reflecting on her recent return to live music: a sit-down socially-distanced EP launch at The Windmill in September. “It was like I landed again in the world just looking at people for the first time, like, ‘Oh my God there are people here’. It was really special.”

As for her own output in 2021? It’s set to be the year of the cello (you heard it here first). “I’ve been listening to really weird cello music. I’m obsessed with cello. I feel like I should put an ad on the bottom of this like, call me if you play! Cello has a different vibration, or deeper vibrations… going back to The Beach Boys. And Vivaldi! I can’t wait. I can’t wait! It’s going to be such a treat having been stuck inside for so long. Honestly, I have so much stuff ready. It’s exploding out of me.” Whether channelling Ancient Greek lyric poetry, or her fiery post-punk peers; classical composers or surf rock Agatha Christie, if there’s ever a fork in the road, Sinead will find a way to accommodate both paths. Load up the tape deck, and strap in for the drive.