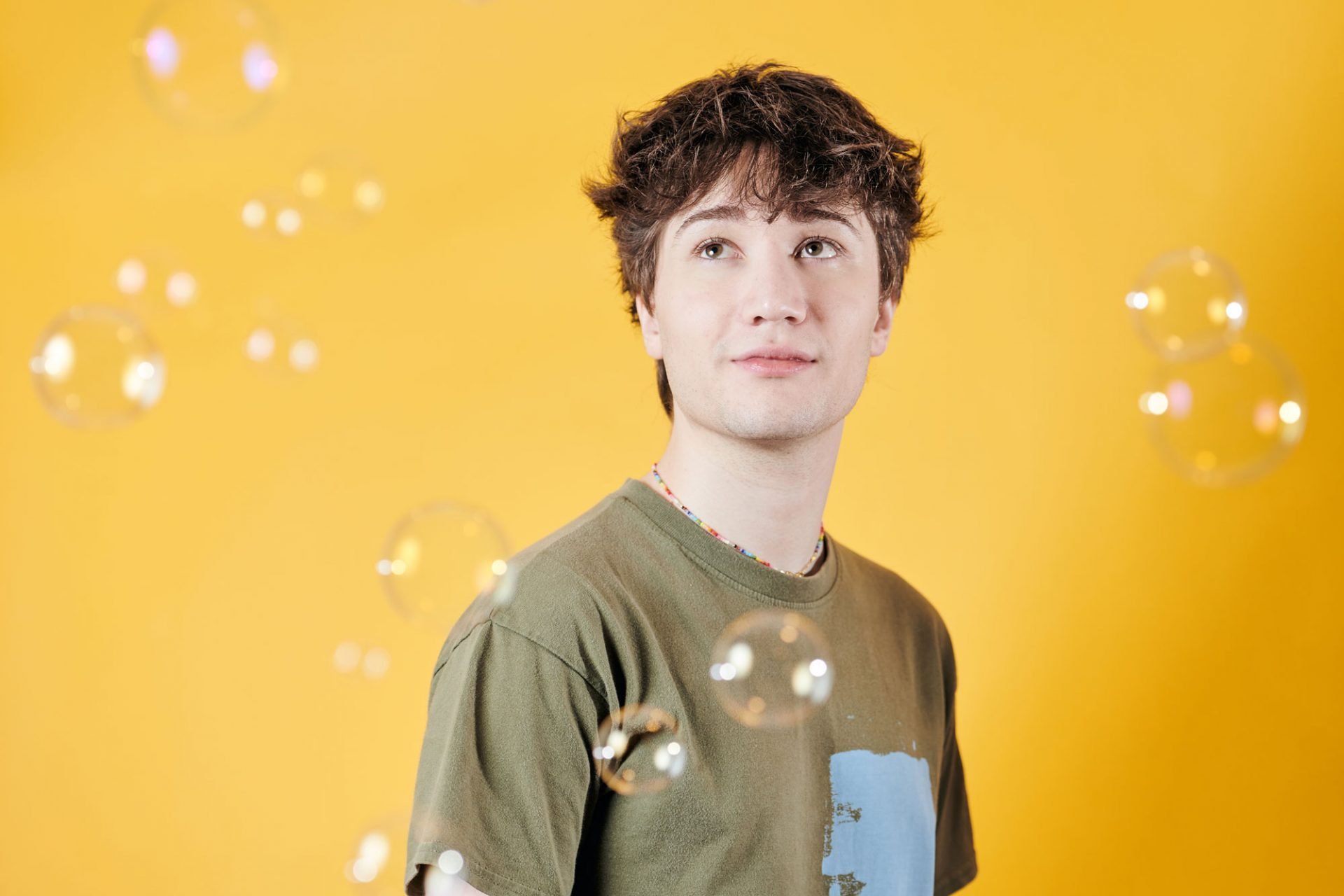 Future popster beaux has a string of EPs behind him, and a new one just dropped – but what really shines through his ambition to keep pushing things further beyond the music he made in his bedroom. What comes next could go anywhere.

In a sense, the last year was the ideal time to be a bedroom pop star. However, emerging on the other side with a fistful of EPs that managed to hit a million listens was naturally quite the jarring adjustment for beaux. With no clue how the reaction to his music would be out in the real world, it was a daunting return to normality for the 22-year-old. Thankfully, he seems to have taken it in his stride. “I’ve never had audience feedback for any of the songs, so it was so interesting seeing an audience react to the music. We did some warmup shows before we did any festivals, and for the first one, I was a bit nervous,” beaux admits. “Mostly about all of the equipment – we were running off of laptops, and I was just thinking, something is going to go wrong, and do I know how to fix it? I don’t think so. But luckily, nothing went wrong, and after the first show, it’s been really good. I’ve not felt worried about the shows; it’s just been really fun.”

Rich, effortless vocals and layers of experimental production define beaux’s sound across his earlier two EPs, ‘I Don’t Want To Make It Alone, I Want To Make It With You’ and ‘a love letter to the moments spend outside’ (apparently, as do long titles). Fast forward to the present day, though, and those qualities are pushed to the stratosphere as he approaches his third EP, ‘memories written down so I won’t forget them’. After signing with Dirty Hit back in 2019, the world effectively became beaux’s oyster. “I make all these songs at home, but I was like, I’ve got this label who are so great and happy to facilitate my ideas, so what can I get? I recorded all these vocals and thought it’d be so cool if a choir was doing this, so I wondered if we could get a choir. I asked the label, and they said we could use the London Community Gospel Choir, who are so good. Then I had some strings that I just programmed, and I just thought, I wonder if we can get real strings, that’d be so cool. It was a moment of exploration of what can I do that I wouldn’t be able to do in my bedroom, by myself? What can I do that’s fun and cool? I was just trying to do stuff that was exciting. It was just a matter of what is possible. It inspired me to be more creative because if you’re doing something like that, you want to make sure it’s worthwhile.”

“You know when you feel like you’re a character in a movie? I’m always writing from that perspective”

That fresh ambition pushes the time-capsule like ‘memories written down so I won’t forget them’ into new dimensions. It’s sweetly optimistic but dripping with nostalgia, fearlessly playing with distortion and tone. As per the title, it’s a collection of happy moments set to those idiosyncratic beaux sounds. “I always forget,” beaux laughs. “I feel like I have no memories before the age of ten, so in a way, the title is funny to me, because I’m literally here trying not to forget these memories. It’s like a journal and a diary from when I was feeling reminiscent about life.”

It bottles up each moment delicately and timelessly captures that sentimental feeling. beaux’s matter-of-fact lyricism is a mainstay of each release, and on his latest EP, it melds with the deeply personal nature of the specific moments that beaux suspends in time. “I think for me, if I try and write too poetically, or I try and make something up, it just doesn’t sound very good; the lyrics don’t work as well. I realised that, and I’ve been writing quite literally.

“Most of them are literally just my memories, and hopefully, people can relate their own memories. I always find, I don’t know if this is the case, but for me, the more specific someone is with their own thing, the more I can relate. When you watch characters in a TV show, you’re not living the experiences they’ve lived in the show, but you’re still able to relate to the character and relate it to yourself. Hopefully, the specificity of my lyrics makes it more easily relatable as opposed to being really vague. I think if something says ‘oh, I was really sad’, you could be like yeah, I guess I was really sad before! But if you explain a specific detail about why you were sad, someone might be reminded of a specific time with them.”

A large amount of the EP chronicles a familiar trajectory of one’s early twenties. They’re familiar and intricately laced with landmarks of that period. From the infuriatingly catchy ‘Won’t You Take Me Far?’ and its hyper self-aware commentary on pandering to social media and yearning to see the world to ‘The Life I Lead’ and its absolute adoration for making music, they’re earnest and intrinsically resonant. “I’m 22, and I started writing these when I just turned 20, so I hope they’re relatable to other people in their early twenties, or looking back,” beaux muses. “I was thinking when I listened to the Olivia Rodrigo record, it sounds so like how a teenager thinks. When you go through a breakup as a teenager, and it’s the biggest issue in the world. I thought that was so cool because it was like a bit of a time capsule listening to ‘SOUR’. I sound like I’m so old! But that perspective of someone in their late teens and how they think – if my music does the same sort of thing, I think that’s really cool, like if you can listen to it and think yeah, that’s how I felt in my early twenties. Olivia’s really cool. Writing music that appeals to teenagers can come across as quite cliché, but hers doesn’t at all; it’s just very cool. She does it in the perfect way; I’m a big fan of her.”

Arguably, a key part of your early twenties is distinctly feeling as though you’re playing the part of adult but it being just that – a part. Especially in the age of TikTok, idealising your life and capturing it just so, in a way that makes it feel important, feels more pressing than ever. beaux completely gets that. Those memories at the core of the EP are filtered and romanticised to high heavens – and wouldn’t we all do the same?

“You know when you’re sitting in a car, looking out of the window or on a train, and you feel like you’re a character in a movie? I’m always writing from that perspective of seeing it in my head like it’s a movie – there’s probably loads of influences in there from TV shows and movies, how they’re made and how characters act. I suppose I write about the stuff that to me is interesting – you’re going to write about the stuff you internally romanticise because that’s what you find significant. I guess you pick those key moments and key memories that when you look back at them, you always look back with rose-tinted glasses. Especially when I’m writing about further back memories, more distant memories, I’m writing through rose-tinted glasses – I just romanticise it in my head.”

That reflection is what makes beaux’s music so evocative and relevant; we’re all guilty of blowing things out of proportion in our mind and crafting something inherently romantic out of nothing. By enveloping those memories in shades of pink, beaux encourages you to hold onto those moments in the present, as they happen. “On ‘the life I lead’, at the end of the song there’s this deep voice that goes on for a while: it’s sort of the negative voice in the back of my head that says even if you’re in a really good place, and you’re really happy; eventually something’s going to go wrong, someone in your family could get sick, or you’re gonna die when you’re 80. It’s just that voice telling you everything can’t be perfect forever. But I do then say, ‘life is like a snapshot of the earth, and then our time’s up’, and that’s the moral of it. Just to make the most of the moments you have. Inevitably, it’s going to come to an end, so try and make the best of it.”

With a third EP now under his belt and the future looking bright, it seems beaux might be clinging onto more of those memories than ever. Come a few years’ time, the next stage of his career might well be the time he looks back to with the kind of nostalgia laced into each beat of ‘memories written down so I won’t forget them’. Let’s hope that songs as great as these are born of those memories, too.