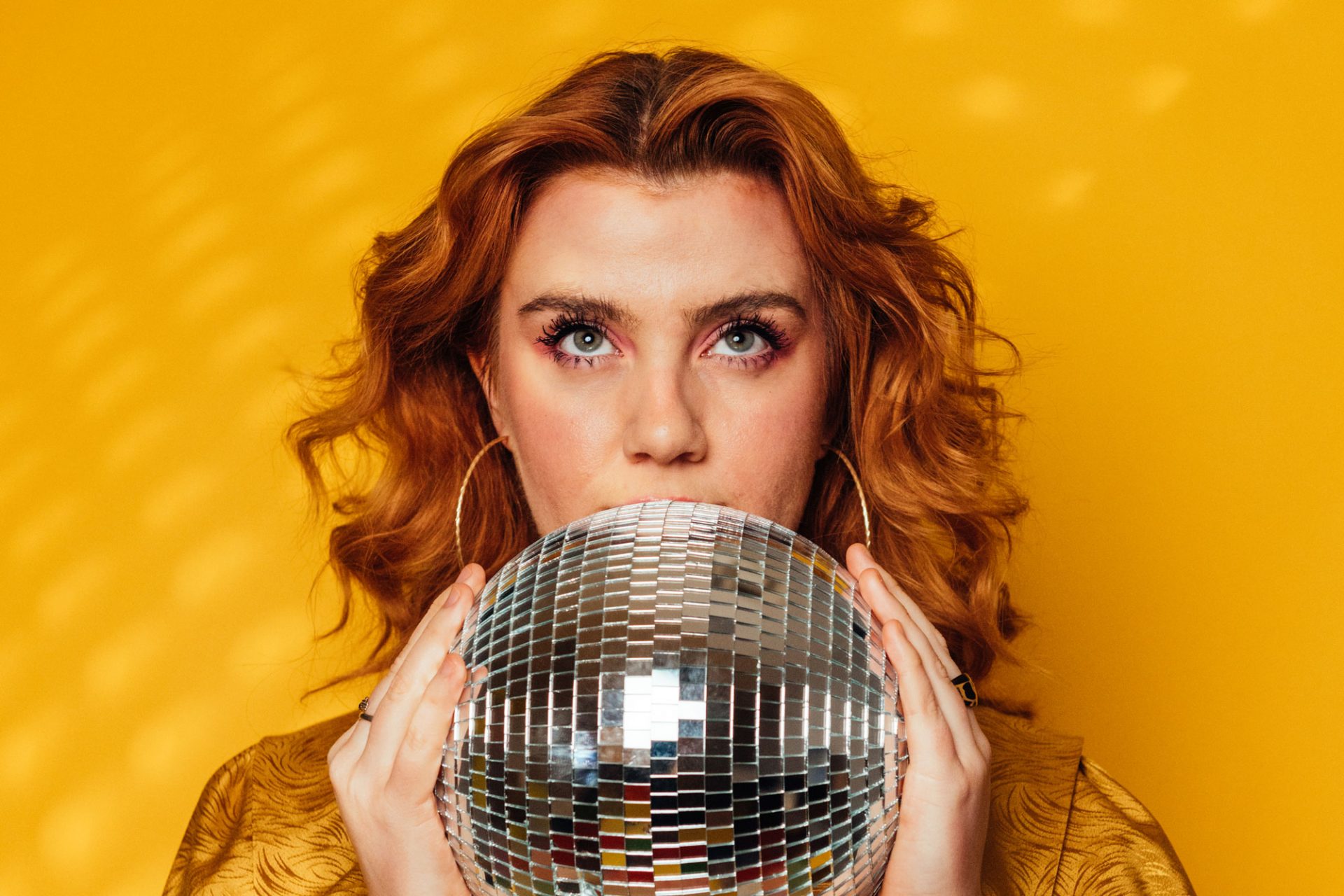 If you already know about CMAT, you’ll know she’s potentially the greatest pop star on the planet – mostly because she makes everyone else seem boring.

We love a pop legend, and right now, in the year of our lord 2021, there might not be a bigger new pop legend than CMAT. It’s no exaggeration to say there’s no one around right now quite like CMAT; no one who exemplifies the ridiculousness of pop at its most inspiring and transformative who can frequently make you cry tears of laughter. But, perhaps most importantly, she can also hit you devastatingly right in the feels with a gut-wrenching sucker punch, often within the same song. CMAT can do it all, and she perfectly understands that amazing pop is made by amazing people who dare to be different and forge their own paths. It’s all of this that sees her promising to quickly ascend pop’s mountain in 2022, making us laugh, cry and dance along the way.

In many ways, 2021 has been a pivotal year for CMAT as she made important strides in developing as an artist, writer and person ready to release her debut album early next year. Like everyone, though, it started slowly. “This year was an extension of the musical blue balls that came with the pandemic,” she begins. “I had my Irish tour booked for March and April because everyone was told it was going to happen by then, and then obviously that didn’t happen, and loads of things were still cancelled for the first half of the year. That was upsetting but also because of all the free time that was afforded to me, I was able to finish recording my album a lot faster.”

As we moved into late summer, though, CMAT finally began to experience some of the thrills of being an actual pop star. “From August onwards, this year has been a titslapper,” she exclaims. “It’s been an unbelievable vibe. I got to do festival season. That was mad. I just haven’t played live since before the pandemic. Before the pandemic, the last show I played, there were like 7 people at my gig upstairs at the sound house in Dublin, and nobody knew who I was, and everyone was like, why do you not know how to play your guitar? I had no audience, and I had no music released. Doing festival season and having people who a) know who I am and b) know the words to my songs was mental. That was so confusing. I was like, who are you people? Where have you come from, and where have you been hiding all my life?”

“I don’t know why I make my life so hard by giving my songs these terrible titles; I just think it’s funny”

CMAT is a musical disrupter. She’s here to do exactly what she wants, exactly the way she wants to do it, and she’s going to sweep you along for the ride through sheer force of personality. Sometimes though, some people don’t get it. And that’s fine because CMAT revels in shocking people and is resolutely determined to shake things up. “It was amazing across the board because there were some great shows, and there were some very bad shows,” she laughs. “There were some fucking stinkers with some crowds who were like, why is there a woman on stage in a corset and a tutu? We want the lads back. But that’s amazing because it’s only going to make me better.”

She tells the story of one particularly memorable show this year in Scotland supporting an unnamed band, notably not the very lovely Declan McKenna. “It was the most hostile crowd I’ve experienced in my whole entire life,” she says. “People threw pints towards the stage; people were booing me because they just wanted the main band to come on. There was a group of lads in the front row who kept flashing me messages on their phone saying get your tits out. That should have been a horrific and terrible experience, but I just loved it. I came off stage, and I was pissing myself laughing. I’ve had panic attacks on stage before, and I’ve had really hard shows where I’m not enjoying it, and those are horrible. With this show, I should have had a panic attack, but I didn’t because it was just so funny. I started shouting back at the crowd and just giving out. I’m on fire; shut the fuck up. Even when there’s a really bad show, it’s been amazing. I’m excited for more shit shows in 2022. I’m excited for more people to throw cans at my head.”

It’s that kind of unshakeable confidence and self-assurance that drives CMAT forward, however, it belies the real emotional depth of feeling and vulnerability that goes into her work. The dichotomy between brahs exuberance and introspective melancholy is at the heart of CMAT’s songwriting and makes her songs so resonant. “I think people want something different now. We’ve seen this trend emerging over the pandemic where the bands and acts who are getting attention and support are notably different from the standard that was before,” she says when asked why she thinks she’s connecting with so many people. “People just want to have fun now. I can provide that and can steer the conversation towards fun and humour. I also like to think that as well as accommodating fun and good vibes and legendary antics, I do also suffer badly with my mental health. I don’t make it a part of my personality, and I don’t make it a really upfront thing where I’m like, woe is me, but I do make it very obvious in my songs that that’s what’s going on. It’s at the core of everything. The only reason that any of this is happening is because I am a problem, and I have a problem.”

That sort of unflinching warts and all introspection is a fundamental part of her work. “I’m really honest about that and have never tried to make it anyone else’s problem or anyone else’s fault,” she continues. “The number one response over the comedy and me being really loud or whatever, and the thing people connect to most is the fact that I air out all of my grievances with myself in a very straightforward way. It makes other people more comfortable to be like, I also have a problem, and the problem is me, and it’s not anyone else’s problem, and that’s ok. You can be a bad person sometimes, and it doesn’t have to navigate the direction of your life forever. You can just accept that you’ve done bad things and move on. You apologise and atone for it, but you’ve got to move on. That’s a very big factor in my music and my songs. I think people will recognise that and appreciate that.”

This internal battle comes to a head on her forthcoming debut album, ‘If My Wife New I’d Be Dead’. “I think it’s an Irish problem,” she contemplates. “The people in your life who are the most jovial, the loudest and biggest party animals are the ones who are in the most trouble. They are the ones who are the most vulnerable. That’s the main theme of the album. It’s about the loud and really charismatic people in your life who are like whooo, life’s a party! And they’re the ones that we lose very quickly. That’s a theme across the board in my life. I’ve seen it so many times before. My personality online is jovial and big because I’m not going to talk about anything deep on Twitter.”

When she’s talking about the album, CMAT is positively buzzing with excitement in a positively CMAT way. “You can expect a lot of Catholic guilt and some of the most amazing artwork I’ve ever seen in my life,” she laughs. “It’s the funniest tracklisting that I’ve ever seen. Some of the names of these songs, I don’t know why I make my life so hard by giving my songs these terrible titles, but I just think it’s funny. There will be some laughs and some vibes. It gets pretty dark, but I try to balance it out as much as I can with all the humour. We can expect some rooting tooting country music good time gals. It’s going to be liquid CMAT.”

CMAT was destined to be a pop star. It was written in the stars. “I came out of the womb wanting to be a pop star,” she says. There’s a childlike wonder to her songs that go back to her formative memories of listening to music as a kid. “All of my favourite music sounds like it was made for children. There are songs on my album that I specifically wanted to produce to sound like they could have been in the original muppets series. I would play a clip of the muppets to my producer, and he’d be like, hmm right, ok,” she laughs. “That’s the side of music that will always appeal to me in a very extreme way. I wanted my first releases and first album to musically pay homage to the music that I listened to when I was a kid, The Beatles and The Beautiful South and Boney M and Scissor Sisters. It’s gorgeous and memorable and colourful and fun,” she says. A perfect description for the whole CMAT aesthetic.

2022 promises to be a significant step up for CMAT on every level. Not only do we have the album but some mega tour dates too, and now she has an actual band. “The band is hands down the most beautiful band I’ve ever seen in my life,” she says with typical confidence. “Every single member is an undeniable 10/10 looks-wise. There’s not a single dud in my One Direction. Everyone’s hot. Everyone’s beautiful. Everyone is very kind and amazing musicians, and they’re all going to wear matching outfits because I’m going to tell them to.”

Creating her own weird and wonderful but deeply human and relatable world, CMAT has carefully nurtured an aesthetic that is both modern and retro. She’s equally adept at channelling 70s country-pop or the hottest memes on social media, and she’s funny and heartbreaking in equal measure. 2022 will offer the full CMAT experience in all its bonkers glory.