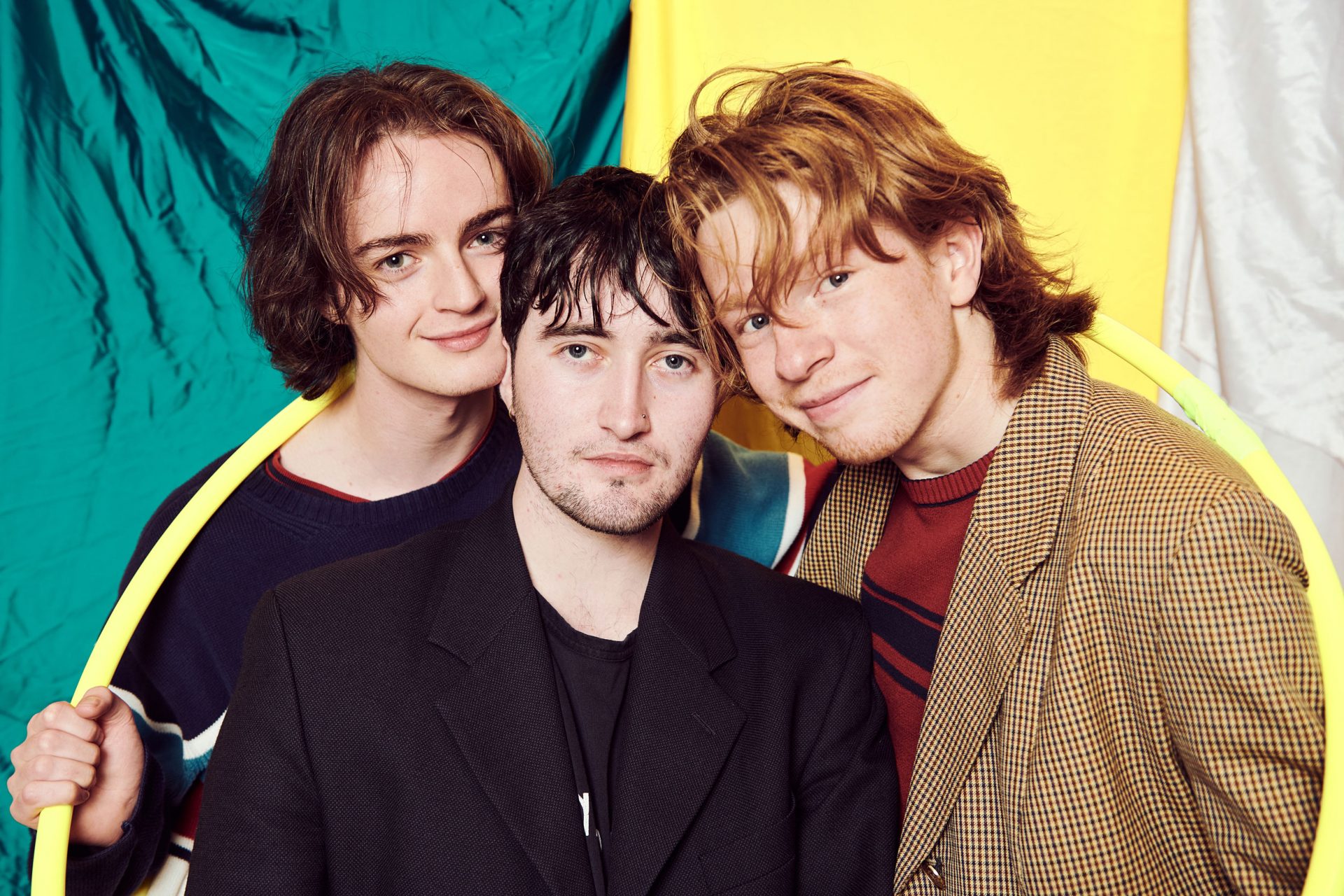 Hype List 2022: Courting: “No famous bands have ever come from here; it’s just us and The Beatles”

Sometimes, a band just fits. That’s how we felt from the first time we heard Courting. Not just because of their brilliant bangers, but because of their willingness to engage in a bit of Dork own brand nonsense. With live music back in full-flow and a new year round the corner, the future looks bright for Liverpool’s new favourite sons.

“We discussed pancakes and potatoes in our last interview, didn’t we?” Yes. Yes, we did. Maybe this time, we’ll stick closely to an in-depth discussion of the intricacies of Courting’s upcoming releases with frontman Sean Murphy-O’Neill though. Cut to twenty minutes later, as he’s trying to text Sir Paul McCartney’s burner phone to get him in for an audition and failing to make ‘using a phone’ work. Pure chaos energy reigns supreme; all is right with the world.

Rewind a year, and Courting were on the edge of being really proper good and exciting. ‘Popshop!’ and ‘David Byrne’s Badside’ had built on the early promise of ‘Football’, and in the absence of, y’know, being able to leave the house and stuff, their Twitter game was strong enough to keep them in the limelight. This year, despite only releasing one EP, they smashed over that edge with a crash and a bang. Finally able to play shows, a headline tour has followed, and now they’re going to be ending it in Brixton Academy alongside permanent close friends-meet-deadly enemies Sports Team. 2022 is shaping up nicely, with a couple of new songs starting to slip into setlists. Tennis, anyone? So how much tea can Sean spill about their plans then? “Practically none,” he grins. Cheers, always great to chat.

“We’re the sleepiest band in showbusiness”

“I can’t remember too much about this year,” he admits. “Everything just kind of blended and became a bit of a mess. Our first proper tour, our first proper release, we’ve had a lot of things change and been all over the place.” With guitarist Michael Downes and bassist Sam Brennan leaving the band over the last year, the core trio of Courting remains firmly in place, even if they are somewhat ready for an early night these days. “We’re very tired,” agrees Sean. “It’s kind of our brand; we’re the sleepiest band in showbusiness.” Strangely competitive about how sleepy they each are, he proudly states, “I am known for being the least sleepy in the band. Drummer Sean [Thomas] is a sleepy man, and Josh [Cope] can sleep anywhere anytime after doing any amount of activity. One task, and he’s conked out.”

Living those rock and roll dreams to the full, we chat about whether their first headline tour was full of debauchery and excess and instead inexplicably end up talking about carpets. “Before this, the only places we played outside of Liverpool were Manchester and Glasgow,” he says. “We played everywhere. The London show was a lot of fun; Bristol was CRAZY!” How so, Sean? Why did The Louisiana tickle you so? “It’s the only venue I’ve ever been to with a carpeted floor, really cool.” Right. No other reason? “The number of venues we went to that were really kind of dirty, that venue is the most clean,” he reasons. “They’re definitely getting that steamed regularly. It was nice. What a job that is, nothing but respect for the person who deep cleans the carpets there, it must be the most under-appreciated job of all time.” He’s so happy talking about this that it feels rude to move the conversation on. “I’ve lived my own dream here,” he says. “I’ve created it, and now I’ve lived it. It must be nice to be the first person to walk in after they’ve cleaned it.” He pauses. “Well, I guess that was us because we were the first people to walk in that day. It did smell nice, too, if I remember correctly. Though, to be honest, the crowd were really polite, and not much seemed to get spilt. Maybe they’re just very cautious and polite in Bristol.” Why’s that then, Sean? “Because they have a carpet in the venue, I can appreciate that.”

Carpet or no carpet, the tour was a success with most nights sold out and, finally, a sense of momentum to match the frenetic energy of their recorded output. “It reassured us that we were doing something right,” he says, though as with most things, he’s already moved on to the next thing. Work on ‘something’ has been ongoing since the release of the ‘Grand National’ EP, but what it might sound like is still under wraps. “I’d say if the leap from what we were doing before the EP to the EP was tenfold, then this is like a thousandfold or something,” he says. “It’s the best thing ever, and I’ve heard it. I’m very proud of what we’re working on, but it’s very different to what we’ve been doing.”

He talks about how good it has been to see IRL reactions to the new songs after such a long period of writing in lockdown, especially as many of these songs have already been recorded before anyone’s even heard them. “It’s actually very hard to predict what people are gonna think,” he says before admitting that they’ve pulled back from playing too many new cuts. “We’re not self-indulgent enough to do that,” he explains. “So we just went back to playing some of the other ones five or six times instead. I think that’s more fair. We did five versions of ‘Football’ in Cambridge; that was a good day. A really polite show where people were shushing each other.” Another polite affair, it seems. “We tried to leave, and they made us do it again!” he pleads, somewhat misunderstanding the power dynamic between band and audience. “We’re a democratic band,” he says. “If people want us to continue playing ‘Football’ at various increments of speed, then who are we to deny the public what they want?”

As well as the sheer flex of playing the same song five times in a row, another gig highlight for Sean is perhaps a surprising one. “I hold an actual belief that the best part of any set is the walk-on music,” he states, potentially forgetting the bit where his band is meant to play their songs after that bit. “I’m being serious! You’re waiting to see a headliner; you’re bored out of your mind. The second that those lights drop, you get a complete vibe, and I can tell, based on what that song is, how funny someone is. I was at Leeds once, and The Courteeners came on to ‘Live Forever’. I just thought, my God, that is shit.”

Sean’s passion for walk-on music gives context to how sad he was at having to walk on for their set at Live At Leeds to silence. Desperately trying to convey to the sound guy at the last moment that he would like him to play ‘American Boy’ by Estelle using only the medium of sign language didn’t work, perhaps in part to there not being a universal way of saying ‘please play ‘American Boy’ by Estelle’ in sign language. Also, perhaps more importantly, the sound guy couldn’t see him anyway. “It was too late, devastating,” Sean remembers. “So we had to play a cover of it instead.” Estelle is a firm favourite these days, the band having given tracks like ‘Sexyback’, ‘Bangarang’ and ‘Where Them Girls At’ a try first. “We’ve got a whole playlist of basically bad songs from 2010 which are good in hindsight,” he explains. “And The Pink Panther theme. And that ‘video piracy is a crime’ message over some beatboxing. And then we come on stage, and it’s just shit. But until we can write a song as good as ‘American Boy’, then realistically, I don’t mind that being the peak. It’s written across our practice space wall as a to-do.”

Ask him about Estelle, and he’ll chat all day, but ask him about 2022 release plans and he is much less open. “I feel like early on, we kind of gave people a very open communication in terms of what we were doing,” he says. “But I think that’s boring; I like to surprise people. So in three months time, when we drop an a capella Estelle cover, nobody will see that coming. Especially not now I’ve said it here.”

“In three months time, when we drop an a capella Estelle cover, nobody will see that coming”

In the meantime, they’ve got a bloody big tour support to wrap up, despite those absolutely made up rumours of an internet ‘beef’ between Sean and Sports Team Henry. “In reality, nobody in the whole music industry has ever argued,” points out Sean wildly. “These beefs are all just tricks. Nobody has seriously beefed with us ever. Apart from that one person on Twitter who told us we ripped the logo off. And I just retweeted him because, I’ll be honest with you, I did rip it off.”

Sean says he enjoyed the Margate bus trip with Sports Team, despite not being on the bus – which in many ways explains his enjoyment of it. “It’s just a shame we’re the only band from Liverpool ever, really,” he says sadly. “Because it’s such a big drive to come down south. No famous bands have ever come from here; the fact that it’s just us and The Beatles is quite interesting, really.”

Would Courting get the big thumbs up or down from ol Macca, we ask. “Oh, he said we’re good,” Sean says. “But he’s yet to follow up on that, so who knows?” As we chat, Sean starts to follow him on Twitter, hoping doubtlessly for an immediate response. “Oh, he only follows sixteen people,” he says, quietly disappointed. “Ringo, the ghost of John Lennon, Paul McCartney Español and Paul McCartney Japan. Hmm.” Spotting a mobile phone number in McCartney’s bio, which is DEFINITELY his personal number, he texts him to ask him if he fancies auditioning as the new bassist. He can’t get it to work, reducing his chances somewhat. “I’ve just noticed that The Beatles had very similar haircuts to Feet,” he ponders. “I wonder if there’s some conspiracy there, like when McCartney was actually dead. I wonder if Feet are dead? I’ll ask and find out.”

With our time nearly up, we chat about what else he’s got planned for next year. “Complete world domination, really. Well, hopefully,” he smiles. “Release a load of stuff. Everyone’s gonna say, ‘well this is better than expected’. People will ask us for an arena tour, we’ll say ok, and then we’ll headline Glastonbury. Come out to ‘American Boy’, and PHWOAR, we’ll get Estelle out to sing it for us. I really hope she’s doing well. I don’t think we’ll get Kanye, though.” You heard it here first, folks.