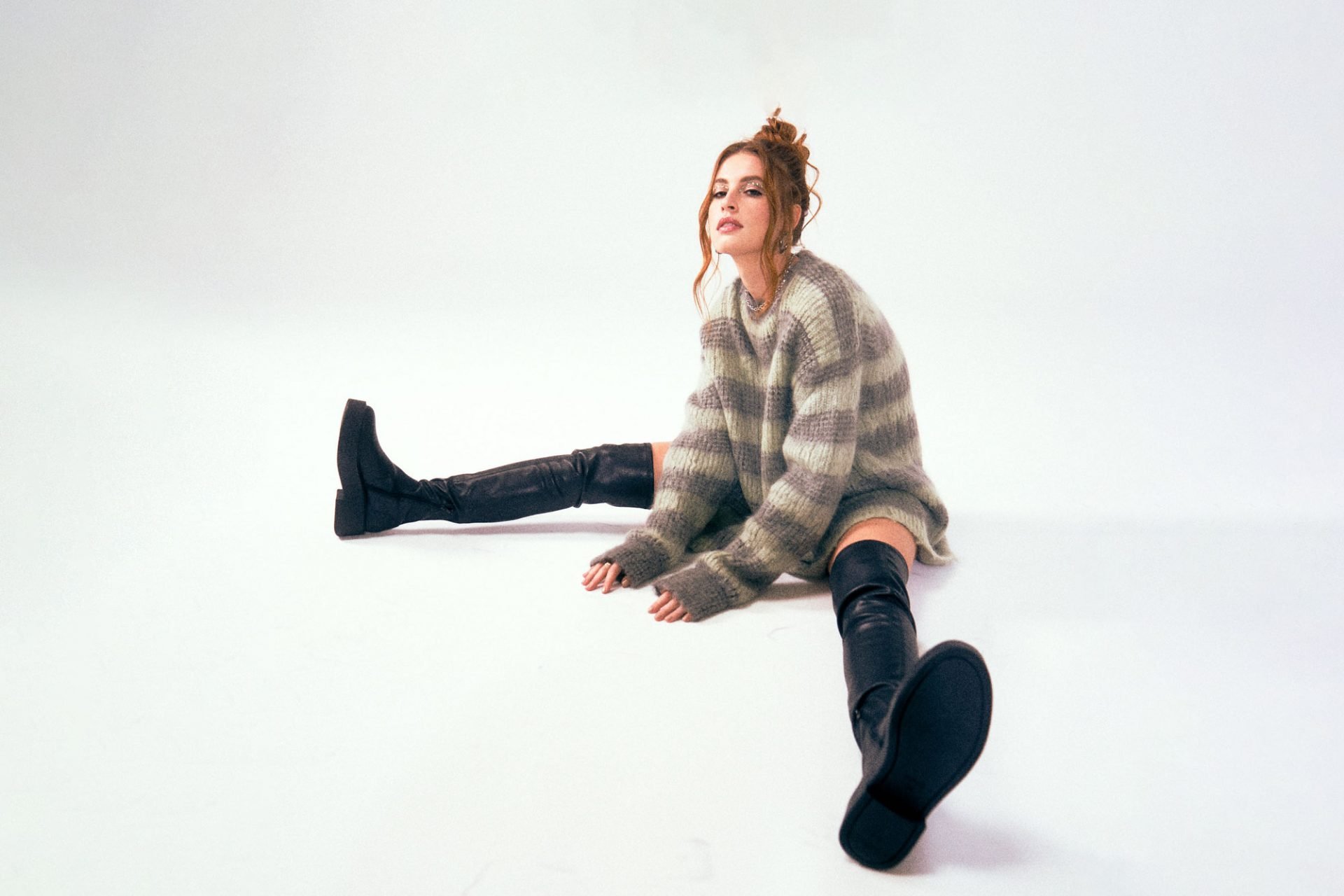 Fletcher already feels like she’s well on her way to pop superstardom. Selling out UK venues and delivering solid gold bangers as she goes, she’s the kind of artist who feels made for the biggest stages.

Sometimes life isn’t all glamorous thrills for a rising pop legend. “I’ve been such a homebody grandma recently,” laughs Fletcher as she recounts some of her more recent passions. “I’ve gotten really into cooking. I’ve been saying that I want to date somebody who loves cooking next, so I’ve been trying to manifest that, but y’know what I need to be what I’m manifesting, so I’ve decided to become a chef myself. I’m Italian, so I’m a sucker for really good pasta. I made a homemade pizza the other day. That’s kind of been my vibe recently. Simple.” With the rise Fletcher has been on over the past couple of years, we can definitely allow her the opportunity to relax and enjoy some of life’s purer pleasures as it’s been quite a ride from talent show auditionee to bona fide new pop icon in the making.

“It’s been quite a journey,” explains Fletcher as she recalls the past few years. “Being an artist is so intertwined with your humanity, and I’m somebody who has really written about my life and my personal life in such an open way. It really weaves between what I’ve been through in my life with my artistry and who I am as a person. The journey has been beautiful. It’s been a wild roller coaster, and I’ve had some shit times, and I’ve had some of the best times of my entire life. It hasn’t been all sunshine and magic. I’ve definitely been through it and thought about quitting at certain points. I feel blessed and humbled to be on the journey I am now.”

“It hasn’t been all sunshine and magic; I’ve definitely been through it”

Fletcher makes capital P Pop in the purest sense but what makes her so compelling is the depth of emotion and real resonant feeling with which she imbues her bangers. It’s a passion that comes from wanting to seek inspiration that she felt was missing as a young girl in a music culture that, although there’s still much to do, has drastically changed for the better for an artist like Fletcher. “I was growing up with examples of people, especially women, in pop music, and I didn’t really see myself,” she says. “I knew that I was queer from a really young age, and I just saw this perfectly packaged presentation of what it meant to be a female in pop. I wanted to do this, but I didn’t see myself here. I’m not a good dancer. I don’t tick off all of these boxes. I knew I needed to be the artist that I needed to see when I was little. Every decision comes from that place. I’m constantly checking in and asking, would little me have needed this? That’s how I formed and how I continue moving forward and making decisions and pulling from that vision of who I needed when I was younger.”

The vision Fletcher is bringing to life now is one of inclusivity and openness. A vision of liberation and freedom. Freedom of expression both in the musical sense and personally. “Representation is everything,” she says confidently. “It’s important for people to be able to see themselves in somebody else and know that something can exist to show people that they have a choice to be themselves and not only accepted but celebrated. It took me a really long time to feel like I could celebrate myself. It feels extremely important to me to uplift other talented queer people and talk about my experiences. I’m super privileged to be in a position to talk about my experiences as openly and freely as I do. I do think it’s becoming a more open and accepting space because more people are becoming unafraid to own their truth. Being yourself is the most revolutionary thing that you can do.”

Fletcher’s whole ethos is how to make pop music that truly transcends. Pop music that cuts deep and touches your soul. “With anything, whether it’s pop music or art, the question is what is the intention?” she asks. “Are you creating something with intention? With this, I want people to laugh or have fun or make people feel something, to really feel seen and connected to one another. The whole world has been through the fucking ringer the past year and a half, and we’re all just really trying to be better and feel connected to one another. With music, you have to say something that matters. What are you contributing to a world that, for the most part, has been a really difficult place for people? What light are you contributing?”

“I’ve always been the heartbreak bitch”

In keeping with this desire to make a statement is this year’s definitive Fletcher banger ‘Girls, Girls, Girls’, which assuredly points the way towards her much anticipated debut album arriving next year. With its homage to Katy Perry’s iconic ‘I Kissed A Girl’, this is a game-changing song. “My mum was dropping me off to middle school when that song had come out, and my mum had gasped at the lyrics, and I was like, ‘fuck, I think I like girls’, right at that moment,” laughs Fletcher as she recalls the first time she heard Katy’s classic. “That song marks the beginning of a queer journey for me and helped me explore my truth. It was really transformative for me, and I was lucky enough to get the blessing from queen Katy Perry herself to interpolate it for my single ‘Girls, Girls, Girls’. It represents a celebration of me and feels super unapologetic. It feels like I’m stepping into a place where I can own this and own who I am and be really proud of that.”

The song acts as a launching pad that sees 2022 promise to be a year in which Fletcher truly blossoms on a global stage. With world tours, exciting collaborations, swish videos, and a newfound sense of uber confidence Fletcher is ready to ascend to the top of pop’s mountain. Despite her rising persona, though, some things will never change. “I’ve always been the heartbreak bitch,” she laughs. “ I’m always writing about heartbreak and my exes, so there’s definitely some of that on the album because I don’t know who I’d be if I didn’t sing about exes. There’s juicy songs on there and also the flip side of my self-exploration and coming into the relationship with myself for the first time. It’s going to be all the feels. I always provide the feels. That’s my MO. I can’t put out anything If it’s not a chaotic rollercoaster.”

The next stop on that roller coaster is a super exciting new collab with fellow pop legend Hayley Kiyoko on her forthcoming next single, ‘Cherry’. “It’s the prequel to ‘Girls, Girls, Girls’, those two go hand in hand with each other, and Hayley Kiyoko is lesbian Jesus as we know,” says Fletcher excitedly. “It was such an honour to collaborate with her.” When the album drops next year, we’re sure there promise to be some similarly thrilling surprises.

For a lot of artists, the pandemic provided a point of reflection for a lot of artists. Some used it to feverishly create new sounds and styles, some used it to take a break and do nothing at all, and others like Fletcher used the time for some much-needed self-care and introspection that shapes the next phase of her career as she shoots off into the pop stratosphere. “Over the last year, I’ve become such a different person because I’ve finally had to look at myself in the mirror for the first time and face myself,” she explains. “It’s been interesting wondering how that person now shows up in the world as Fletcher. It feels like a rebirth. It’s going to be really beautiful.”