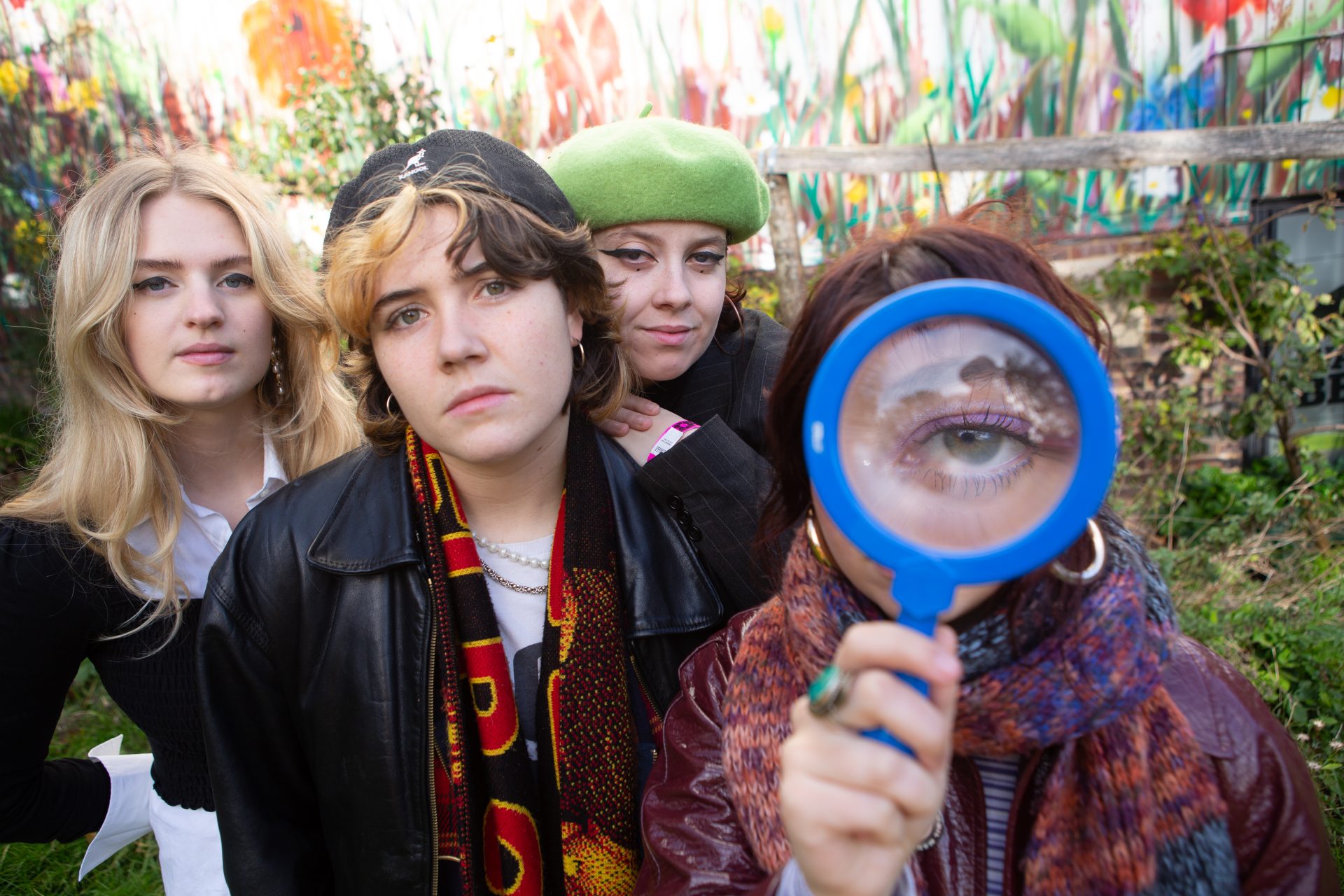 Brighton’s Lime Garden have that certain something that leaves you certain that their future will be as bright as the citrus from which they take their name. Their smart, brilliant indie clatter promises much, and delivers everything.

Since the world forcibly shut up shop back in early 2020, bands have been hit bad. We’ve seen some truly storming debut albums, no doubt, and since live music’s grand return earlier this year, we’ve seen them take on new heights, but newcomers grabbing that attention and running with it? Well, Lime Garden know all about that.

“It’s been such a weird time because the four… wait,” starts drummer Annabel Whittle. “Five? No. Well, however many tracks we’ve released, they’ve all been released during some form of lockdown. It’s only our latest song [‘Clockwork’] that’s actually come out when people can come and see the shows.”

“Yeah,” adds guitarist Leila Deeley, picking up from a rightful blur of a year that has seen Lime Garden quietly going about being one of the most exciting and inventive new bands going. “It’s been weird because a lot of our growth was in lockdown, and so we’re only now just seeing what’s happening. It’s quite funny, but we’re enjoying it.”

The jump from where Lime Garden’s early roots were before lockdown to where they find themselves now is stunning. The Brighton four-piece – completed by vocalist/guitarist Chloe Howard and bassist Tippi Morgan – not only switched up their name (previously going by Lime) but also evolved as musicians. While it put a considerable pause on their plans, coming out the other side has been a revelation.

“Before this, we were really just playing local gigs to like our mates,” explains Annabel, recalling to those early markers, “and then suddenly it’s like – ‘ohhh, this is a big place to play, right?!’ Like, we’re seeing people wearing our merch now. Someone spotted someone at a Fontaines DC show wearing one of our shirts. I was like, woah – that’s weird!”

“People singing our songs back too,” continues Leila, “every time that happens, it’s like, HOW DO YOU KNOW THEM?!?!” she laughs.

It’s clear why things are dialling up, though: Lime Garden have the sort of rich musical world building around them that’s impossible to resist. Moving between different lanes of alternative music with each release, you can never fully predict what a new Lime Garden track will sound like.

“I don’t think we ever deliberately go, oh we want to try out a certain style or certain genre. I just think we’re quite impatient people,” cracks Annabel, looking back at their ever-evolving catalogue, which over the past 12 months has seen the talk of the town turn to newcomers who feel refreshingly untamed by expectations.

“There are different iterations to what we do and what we’re listening to,” Leila notes. “We’re always trying out new stuff and always changing. Even with old songs that we’ve worked on for ages, we’ll just write them off at a point and be like – let’s move on.”

Lime Garden are constantly on the hunt for something new, for a twist that they’ve not tried out before or a flipping of the script that nobody expects. If it’s not exciting and different to them, then there’s no point exploring that avenue – and the results speak for themselves. ‘Sick & Tired’, released earlier in 2021, was a turning point where Lime Garden seized the eyes and ears of many. A bubbling track that feels both full and overflowing with ideas and grooves, it laid an understated blueprint for who Lime Garden are.

“That definitely felt like a step up,” says Annabel, “it was when we signed to So Young Records and got it on vinyl too. What was weird is that we weren’t too sure about it before.”

“Yeah, that audience reaction afterwards really made it clear that it was a turning point,” adds Tippi. “Seeing the audience respond well since has been really eye-opening!”

It’s helped shape what has come next. “90% of our music is bouncy and dancey,” says Leila, “always keeping that with everything we do, I think is the idea.”

One look at what came before ‘Sick & Tired’ and where they’ve gone since shows the evolution of Lime Garden. Despite finding the first few months of lockdown particularly uninspiring, the resulting ‘Pulp’ and ‘Clockwork’ are self-assured statements of intent. Vibrating with a measured pose that sound like the sort of twisted disco grooves you’d find storming around late-night city life, their growth in the space of 12 months finds them firmly centred around the identity Lime Garden now own.

“I think for all of us, the past year, we’ve all just grown up a bit,” reflects Leila. “Writing so much over lockdown gave us loads of time to kinda perfect and play around with what we were doing as a band. We’ve come to find our sound a bit.”

Tippi and Annabel nod in agreement. “I definitely agree,” confirms the latter. “Finding our sound and this cohesive image of what we want to be as a band; how we want to come across. Before with the first tracks we put out, they were a bit more jumbled, I guess… a bit more surfy! We wanted to look and be something different, whereas now we have that clearer idea of who we want our music to appeal to.”

Confirmation has come ever since those live doors opened again. Stepping straight back in with a prized slot at Latitude in July, the resulting reaction and experience served as a further confidence-booster that they were onto something pretty good. Oh, and Rick Astley. Rick Astley was there too.

“Just before we went on, the festival guys came over and were like – by the way, Rick Astley is going to be playing a secret set after you,” beams Annabel. “He did a Foo Fighters cover, a bunch of other stuff – normal day, that!”

“We had no idea he was backstage with us,” smiles Leila. “That whole weekend was amazing. We literally hadn’t been clubbing or anything, and we were just like, oh my god. It was our first festival AND also the first festival back, and it was just great. It made me want to cry. I was so happy.”

As they sit gathered in a Brighton bedroom, it feels like Lime Garden are on the cusp of a takeover. Just weeks later, they’ll be playing in Paris for their first European show, and after coming off a summer supporting Katy J Pearson on their first ever UK tour – these all feel like opening gems/steps for a band who already sound unique. Effortlessly cool and radiating the sort of wide-eyed ambition that comes with simply being able to do this all with your best mates every step of the way – Lime Garden are turning the mosh-pit into a dancefloor, and we’re here for it.

“We want to just keep getting better and better. It’s just so much fun not only writing music but these experiences that you get with it. The idea of playing certain venues or dreaming about playing in different countries, the idea of that always gets us really pumped. We’re really excited to do more,” lays out Leila.

“Stressful though, ain’t it?” laughs Annabel.

If that’s the only worry Lime Garden have, then it’s safe to say that 2022 and beyond will be one shining brighter in the disco-ball than ever before.