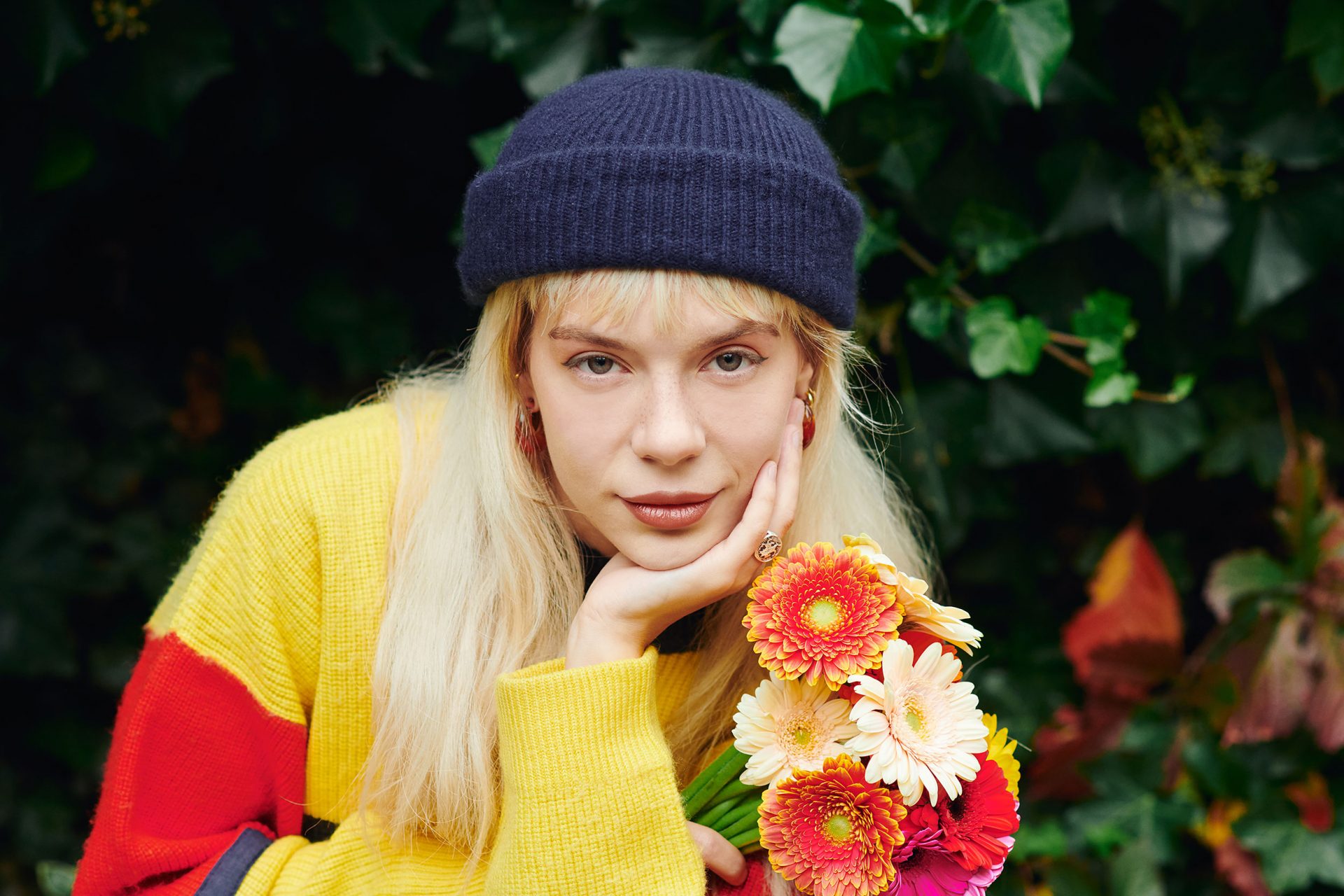 After two delightful EPs in one chaotic year, dazzlingly expressive indie-popster Pixey shows no signs of slowing down.

Pixey may be a sweet and succinct pseudonym to encompass an artist adorning herself in complex layers of whirling sound, but 2021 has put the human underneath – Lizzie Hillesdon – through a real ringer of experiences. Thankfully, few musicians have proved themselves so definitively worthy of attention.

While March’s ‘Free To Live In Colour’ established an ear for glamour, the demand for live renditions as the world reopened showed Pixey that when it comes to the stage, there really is no place more vulnerable. “Playing live is a whole new thing,” she explains. “I never got to play the songs I’d written for anyone before this summer. It was bizarre hearing them sung back to me; I wasn’t expecting that at all! I went from playing to people who had no idea who I was to rooms filled with people there specifically to hear my music… I couldn’t wrap my head around that.”

Having now graced the boards of 110 Above, Dot To Dot and Sound City just to name a few, a new skillset has been engrained through necessity – with “every sound problem known to man” surfacing, adaptability became vital. “I can’t tell you how different it is to be a performer as opposed to a writer and producer,” she reflects. “I thought I had it all nailed; I was set in my ways, then I realised I had to change and adapt to deliver the best possible version of my performance.”

Some artists may claim to step into an alter ego once the lights go down, but this Liverpudlian isn’t one of them. “I wish I could do that, but I’m so annoyingly unchangeable that I can’t help but completely wear my heart on my sleeve,” she reveals. “If I tell a joke that flops on stage, Pixey doesn’t feel that – Lizzie does. I have to manage my emotions on stage. It’s still me completely, and I do feel most in my element up there.”

Fortunately, a well-deserved following – now dubbed her ‘Pixies’ – are there to support her along the way. Manifesting streaming numbers into crowds at headline shows has had a profound effect: “I can’t explain how much it means to me when I’m told that my work means something to someone.”

However, the fans are not the only ones reaching out; whilst she might have recently been considered a mentee, Pixey is now stepping into the large and surprisingly comfortable shoes of a mentor for others in the industry. Specifically, fellow Chess Club signees and buzzy duo The Let Go have tapped into her focused expertise.

“I constantly watch how other women in the industry are navigating everything,” Pixey says. “When I see someone where I was in the past, it becomes my duty to give as much information as I can because I would’ve loved to have that.” She’s certainly not one to shy away from self-development, either. “I still feel like I’m finding the perfect balance. I always feel like I’m still learning, which is something that I embrace. I don’t let that scare me.”

Despite claiming that her career to date is “all a stab in the dark”, Pixey’s latest offering (the ‘Sunshine State’ EP) is further evidence of a coherence and consistency that can only be achieved through vast planning. Carefully curating the flow of each release by picking and choosing through a vast catalogue of mood and genres, a focus on the glee of summer felt a timely celebration in the wake of a triumphant return to the outdoors. She confirms: “That mood just seemed to come naturally. I’m obsessed with the seasons; they can portray a mood so accurately, so I just had to use that. Summer is my favourite season of the year, so to release an ode to how I would sonically recreate that warm energy was fun. If summer has a sound, I wanted to embody it in this EP.”

Pixey glorifies the enchantment we’ve all experienced from returning to our normal unruly routines, but it turns out it’s not all fun and games behind the scenes. A picturesque and vibrant sleeve cover by Cameron JL West was birthed from a less pristine photoshoot. “We went to a park in Reading where there was this lake – the picture looks so sunny and beautiful, but that lake is the grimiest thing I’ve seen in my whole life. I was so cold, and my feet went right into some green sludge.” Oh, to be a pop star.

The most striking aspect of all Pixey’s music is the unique production fingerprint carried across her entire discography. While co-production credits are smartly utilised to find the best of both worlds, there is no doubt that whittling away on various outdated laptops has paid off in dividends, giving her output a distinct and undeniable flavour. She recalls and praises the journey it took to get here: “I didn’t want to find my sound and my identity around someone who I didn’t know – it’s very intimidating starting to produce, and you can easily feel out of your depth. If you can portray your sound and find your own sonic identity, particularly as a woman, it can be very powerful.”

This sentiment is particularly striking when you consider that fellow Dork fave Orla Gartland also voiced the fact that women in music often have their technical capabilities dismissed in the industry, which immediately knocks the confidence of rising talent. Pete Robertson, who worked on part of Orla’s 5-star debut LP ‘Woman On The Internet’, has boosted Pixey’s self-belief on this new record too. “When you’re starting out, and you haven’t proven that people want to hear your stamp of production… I just had no clue what I was doing,” she confesses. “Even now, I worry that I’m not qualified enough. Pete eased that and taught me that production is just embracing how you want to portray your sound to people.”

Her vision for this portrayal is evidently strong, but even so, people have more than once suggested she hand over the reins to someone who ‘knows what they’re doing’. “That made me upset; it really affected me because part of why I enjoy music so much is being able to play around with production non-stop,” Pixey says. “It goes hand in hand with writing; I can’t imagine being a songwriter without being a producer also.”

Now shutting these naysayers up and then some, 2021 has truly documented the journey of an artist coming into her own. “I’ve never not felt confident in my music because I don’t write for anyone’s approval. The fact that people enjoy it though… nothing makes me happier,” she gleams. “My songs are just me making sense of my feelings, and putting that into the world can be scary sometimes. I want to be a little bit braver in terms of what I’m releasing.”

As a name embracing the very spirit of Hype, Pixey is certainly not afraid to plan ahead: “I love thinking about the future!” she boldly claims. “I find focusing on what’s next excites me for the now as well.” And what might the next year have in store then? “I have so many things that I cannot wait to share. You’ve not heard my best songs yet,” she teases. “I don’t feel like I’ve had my big moment yet; I’m still exploring styles and finding what I enjoy… but I’m ready for anything.”