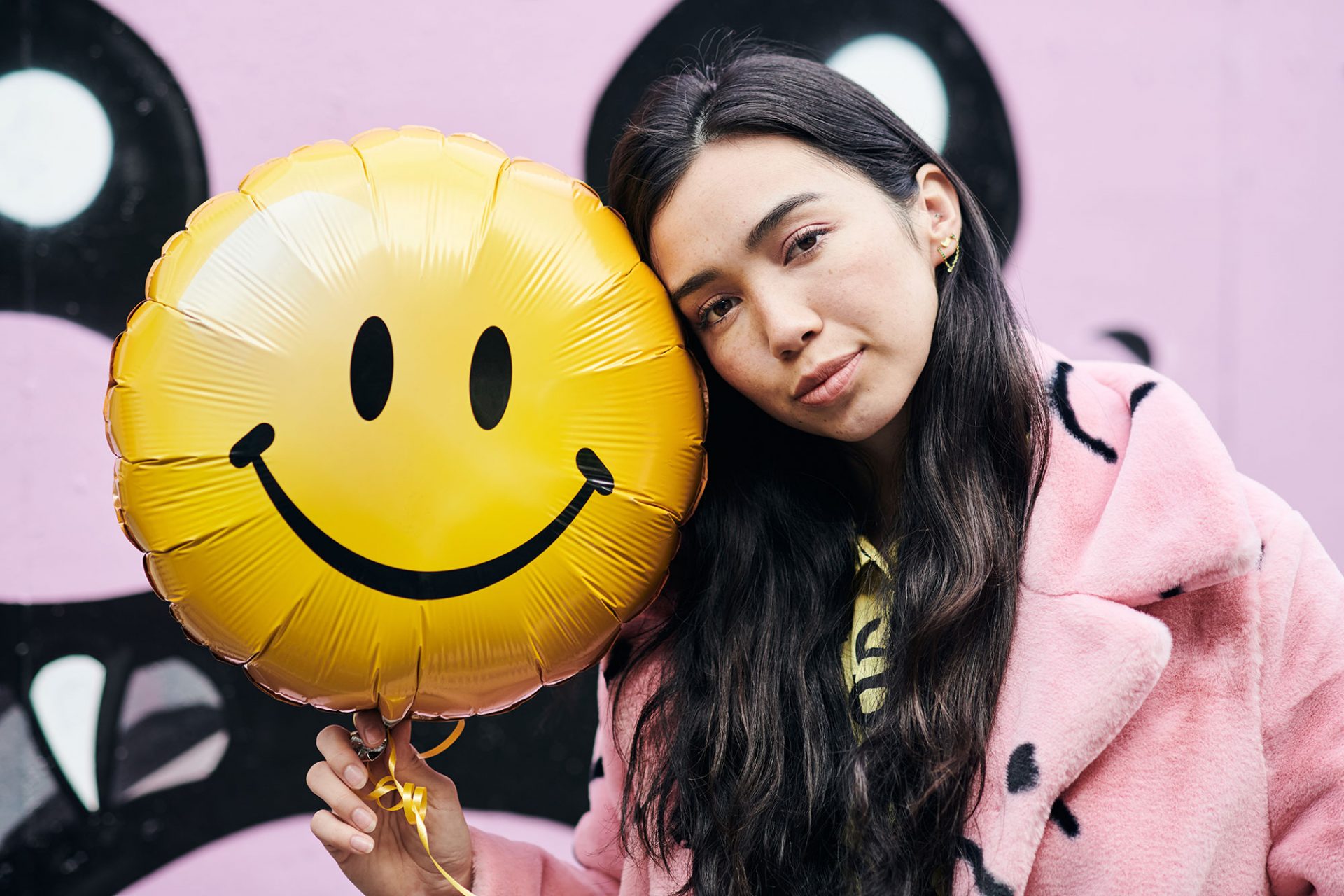 Freshly inked with Dirty Hit – home of The 1975, Wolf Alice and Beabadoobee – it’s safe to say that alt-popster Wallice is on the right track to hit the very top.

A year ago, Wallice released ‘Punching Bag’, a chirpy, scrappy number about being forced to move on, delivered with a roll of the eyes. The 23-year-old had been writing songs with her friend/producer Marinelli since she was 17, but this track was different. It marked the start of a new chapter.

It took them a while to find a balance between

Wallice’s alternative rock influences and what the fledgling artists could actually create with the tools they had available to them. “It just never felt wholly authentic,” says Wallice, who still loves her old material but has since outgrown it. “I always wanted to make music that I would want to listen to, but we didn’t know how to do that,” she continues. “’Punching Bag’ was the first time it really felt right.”

It paved the way for the brilliant debut EP ‘Off The Rails’, a raw, witty six-track record that wasn’t afraid of a little confrontation.

The pair describe their process as “making garage rock music on a computer”. Wallice admits that having a band would be fun – and in the future, they’re going to experiment with live instruments during recording – “but what I love about having this solo project is creative control. Maybe it’s because I’m an only child and an Aries that I’m more stubborn and hard-headed, but because everything is under my name, I can really fight for what I want.”

Exactly 365 days after the release of ‘Punching Bag’, Wallice signed a record deal with Dirty Hit. Despite having half a million monthly listeners on Spotify, Wallice still felt like an imposter as she went to sign the contract (running thirty minutes late, thanks to London traffic). “Two kids in a trenchcoat is the perfect description of how I feel in this industry right now,” she says.

It marked the end of a hectic few weeks for the singer, who’s also just played her first-ever proper live shows supporting Chloe Moriondo in America. “I’ve played open mics before, but one of the shows was at The Roxy in LA. I’ve seen so many bands there,” she says. “Honestly, I haven’t processed either of those crazy life events,” she adds, drinking coffee to try and deal with jetlag.

Wallice might be taken aback by her achievements, but that isn’t down to a lack of ambition. As soon as she set her mind to becoming a musician, she gave it everything she had.

Growing up, Wallice’s dad was very strict, and when she told him about her dreams of attending New School’s Jazz Vocal Performance program in New York City, he suggested she think about studying business as a backup. “I know it was logical, but that sounded like a nightmare.” Luckily her mum couldn’t have been more supportive. “She’s my number one fan.”

“She grew up wanting to be an actress and actively pursued it,” says Wallice. “She always said she thinks she could have made it if she kept going. It’s just how long you want to chase your dreams for, because LA, it’s very delusional. Anything can happen because anything does happen.” It’s where Wallice’s drive comes from, though. “I grew up in LA surrounded by people who didn’t have real jobs, who somehow made that into their jobs.”

She adds: “I didn’t grow up with everything just handed to me, which I’ve seen with a lot of people. I used to have a day job, working at my mom’s salon. I did eyelash extensions. I hated it, obviously.”

New standalone single ‘Wisdom Tooth’ is a “very transitional song” between her first EP and her second. “It’s an extension of ‘Off The Rails’, but it’s not quite part of the  next EP,” she explains.

‘Wisdom Tooth’ was written the day before Wallice was due to get her wisdom teeth removed, and she was really nervous, “just because I’ve got really big teeth and a smaller mouth and jaw. We were working on the song, and the dentist called and started talking about bone grafts. It’s all I could think about.” The finished song compares a relationship with pulling teeth. Like a lot of Wallice’s songs, it stems from real-world events but isn’t held back by something as boring as the truth.

You might think Wallice might be feeling the pressure ahead of the release of ‘Wisdom Tooth’ since when she released ‘Off The Rails’, she had a modest fanbase. Now, there are millions of people waiting to see what she does next. Keep up, Wallice has had her battles with self-doubt ages ago.

See, ‘Off The Rails’ was written in a week last March, as Wallice and Marinelli made the six-hour drive to her grandparents in Utah. It was then finished off a couple of months later. “After that, we had another week to start work on EP two.”

The new EP is “the next chapter”, according to Wallice. “When we wrote ‘Off The Rails’, we were both living at home, dreaming of being musicians. Now we’ve both moved out, and this is our job, rather than a hobby we’re chasing. I feel more like an adult now.”

“The second EP is a little more mature,” she continues before quickly adding, “But it’s still filled with humour and sarcasm, which is really important.” It’s that attitude that Wallice believes is why her music has been so successful. “People connect to my music because of the humour, and that’s something that’s really genuine. It’s not going anywhere.” For the most part, this new EP deals with the idea of “being larger than life”.

“There’s a lot of pretending to be a celebrity, even though that’s not how I feel or act. There’s a lot of checking your ego.” There have been a couple of times Wallice has felt close to celebrity, though. “After the shows with Chloe, I would go into the crowd to watch her because she’s amazing, and people would ask for a photo with me. That was cool. Somebody had me sign their phone case in a Sharpie, which is a big ask. My friend once asked Lana Del Rey to do the same thing.”

Wallice’s music is lo-fi, produced in a bedroom and tackles Gen-A anxiety with a sarcastic quip. On paper, it should be part of the same bedroom pop world as Clairo, Cavetown or Spill Tab. But there’s something rowdy about it.

“The themes are very bedroom pop,” agrees Wallice, “but because I’m influenced by Weezer, Radiohead and Nirvana, it’s a little rowdy. We’re not necessarily making music for cool people. It’s always been the goal to have a rock band sound.”

“I really like that, though,” she continues. “In person, I’m a little more reserved and calmer, so it was fun to play these songs on stage, whip my hair around and run up and down. I need to start doing cardio to prepare for the next tour, though.”

That next run of shows comes in January, with Wallice supporting Still Woozy. “I’ve been listening to him since I was 19. I once DM’d him saying I loved his music and we should work on something together. He replied, telling me to send him something, but I never did.” Wallice isn’t as reserved anymore, though.

“I don’t need to be selling out arenas, though that would be cool. Who doesn’t dream of doing that? But I love what my music has done so far, which is help people feel not so alone. Being relatable to so many people is amazing.”