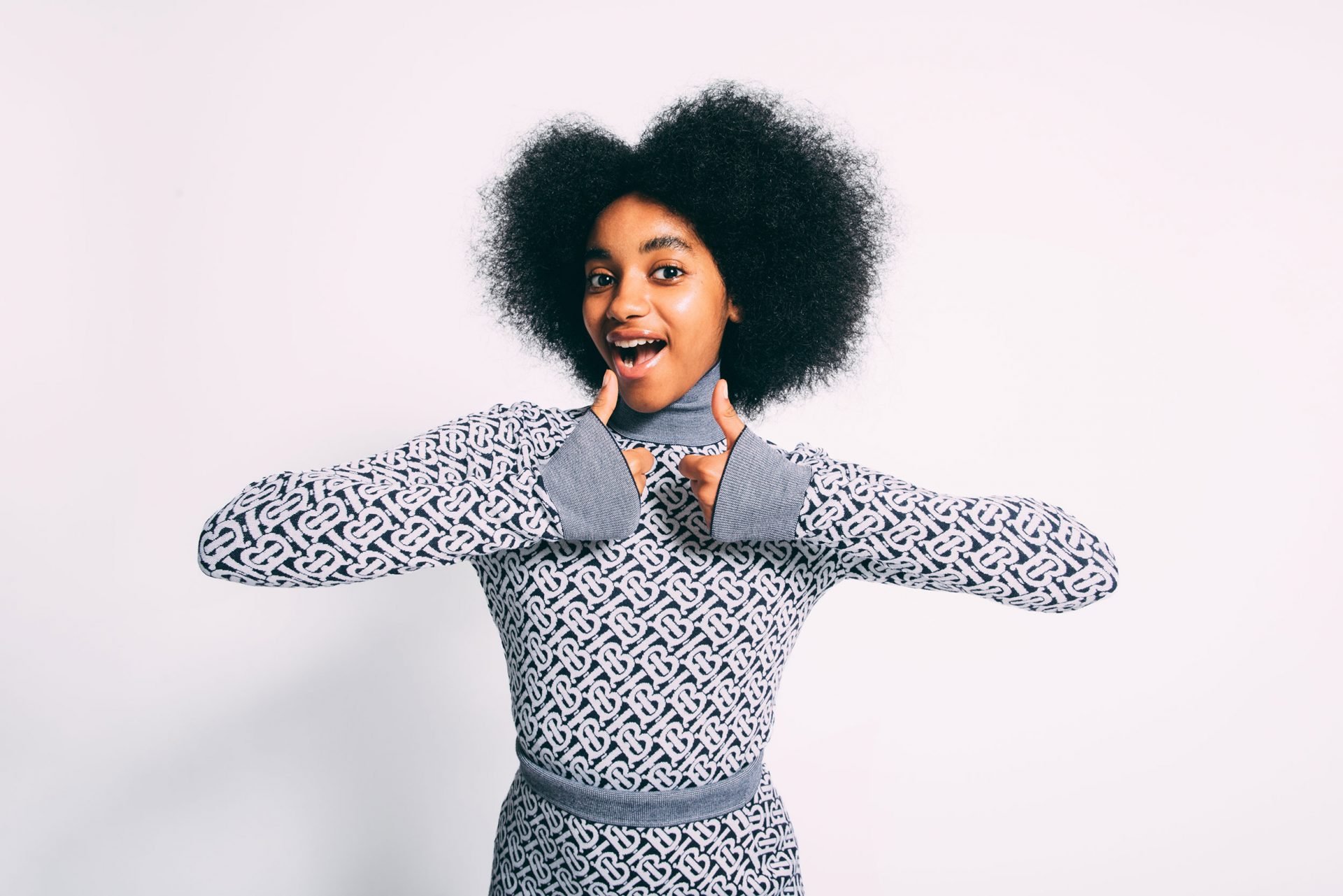 Hype List 2023: Flowerovlove: “I’ve learnt to separate myself and my self-esteem from numbers”

Flowerovlove perfectly encapsulates what it means to be a Gen Z pop star, making music on your own terms with a singular vision steeped in the pop cultural wonderland in which you’ve grown up, warping and blending it into a compelling and idiosyncratic confection. Joyce Cisse is a true generational talent. Incredibly driven, sharp and perceptive, the 17-year-old musician knows exactly who she is, what she wants to do and how she is here to spread the ethos of Flowerovlove.

The south Londoner’s rise has been swift and striking. “It’s only really been a year of consistently releasing music,” she tells us. “I released two songs in 2020, but then I took a break because I was like, I want to be a model. Then I decided I don’t want to be a model anymore because it’s not what I thought it was, and then in 2021, I was like, do you know what? I want to make music.”

There’s a carefree breeziness to Joyce that belies her innate confidence and her grounded nature as she relays that the life of a pop star in 2022 isn’t all just immediate glamour. “I would characterise my journey so far as a lot more work than you think because there’s a lot of things that go into being a musician,” she explains. “You’re not just a musician; you’re also a marketer and, in a way, a model too because you have to do all this magazine stuff like photos all the time. You also have to push your outfits as well. You’re basically an influencer because you do the whole social media thing. There’s so much that goes into being a musician. You’re also a creative because you come up with the ideas.” Despite all these demands, there’s one constant for Joyce. “The outcome is always fun,” she beams.

That fun, playful spirit is at the heart of Flowerovlove’s music. The music itself is wonderfully fluid and dynamic as her sound morphs and changes from song to song. And she’s released a lot of songs. Joyce is incredibly prolific, with 14 singles already released, including the stunning ‘Think Flower’ EP in 2021 and the odd pop viral smash of this year’s ‘Hannah Montana’. There’s a restlessness to her and a desire to just constantly make things happen. “I’m always in a rush when I write music,” she laughs. “I’m in a rush to get things done. I work well under pressure. There’s no one pressuring me, though. I just like to get it done so I can make another one quickly. I like to listen to it at the end, and I’m just so excited for that, so it’s like, let me write this thing really quickly.”

Joyce’s ability to write quickly and create sounds and styles seemingly with ease comes from finding the clarity of what Flowerovlove is and developing the skills and confidence to realise her vision. “I used to be quite shy,” she confesses. “I’ve gotten a lot more confident in songwriting specifically. I know what sounds good and what doesn’t. I’m just a better musician. It’s more of a practice thing where every time you do something, you get more comfortable, and you fall into the routine of ‘I am a musician’ and not just I’m making songs. There’s a massive difference between that.”

With that inspired mindset, endless possibilities opened up for an artist with a gloriously creative imagination. Her whole process is akin to something elemental and beautiful. “I’ve learned that I’m a lot more talented than I thought I was,” she reflects. “I never go in with an idea; I usually just do it on the spot. I always say I’m a subconscious writer. I never have an idea of what kind of song I’m going to make. If someone said, ‘write a song right now in ten minutes’, I could definitely do that.”

“If someone said, ‘write a song right now in ten minutes’, I could definitely do that”

Over the past year of hype and attention, Joyce has had to adapt to the new music economy of virality and numbers and just generally being always on. Something that’s important for any new artist in an incredibly pressured and crowded environment. “Being confident and secure in yourself is a big thing,” she explains. “I’ve learnt to separate myself and my self-esteem from numbers. There’s no point in connecting it to you. It’s so easy when you have a different name from your music. Having Flowerovlove, I just see her as my company. I want my company to do well, but it’s not going to affect my self-esteem if the company is not doing well. I just have to make sure the company is doing well.”

Every company has a mission statement, so what’s the vision for Flowerovlove, then? “World domination, but that’s just for the company,” she answers with an ease that makes you feel there is absolutely no way this is not going to happen. Aside from taking over the world, though, there’s a softer, more holistic goal to Flowerovlove that you can hear in the gentle tenderness that can be found in a lot of her sweet and wide-eyed songs. “For the fans, it’s mainly for them to feel nostalgia and to hopefully gain more love for themselves,” she says. “That’s always my intention with every single song. You know when you watch a Christmas movie growing up, and you wait until the end of the year to rewatch it, and you look forward to it and then go outside, and there’s all these Christmas decorations up and lights everywhere, and everyone’s happy? It’s that sort of nostalgia. Whatever that warm and fuzzy feeling is.”

Nostalgia and evoking feelings that hit you right in the sweetest of sweet spots is the magic of Flowerovlove’s music. You can really hear it in her latest release, the ‘A Moshpit In The Clouds’ EP. It’s a title that also has a deeper context within the wider Flowerovlove world. “When I listen to my music, I always think of the phrase ‘A Mosh Pit In The Clouds’,” says Joyce. “I always see those words. It’s not actually reflecting a moshpit because I’m not promoting aggression or anything, but it’s just the feeling of dancing in your room is what it feels like to me what the clouds can be. No one knows what the clouds feel like. It could be like candy floss, or they could evaporate, and you could just fall right through. I like the mystery of that. When you’re dancing in your room, it’s such a good feeling to dance alone. No one’s watching you. You just feel free. You can go crazy and pretend you’re at a concert or you’re the one performing. I always envision that with my song playing.”

There’s always a sense of dynamics and playfulness in Flowerovlove’s music that makes her stand out from the crowd. She does things other artists don’t, and it’s all the little quirks and side steps that make her so special. “I listen to most songs in a sped-up version,” she laughs as an example of how she does things a bit differently. “I don’t like songs that are too long because I don’t want to get lost in the song. I feel like the shorter the story, the better. You can listen to it again and come up with a different meaning, or it just hits more because you’re like, I need to replay this. I really like songs that just get straight to the point.” It’s little wonder then that with this gift for brevity, she’s become so popular on TikTok. “I think they’re great platforms to promote music, and they do crazy things for musicians,” she says about her various social platforms.

Despite the amorphousness of her music and the way her songs can change from one single to the next, there is a consistency to her music in its spirit of invention and freedom. “I definitely feel like there are no boundaries,” she says excitedly. “I don’t think it would be such a surprise if I released a Bossa nova song or something. The thing is, if I was to do that, it wouldn’t be all over the place like she doesn’t know what kind of music she wants to make, so she makes everything; it’s more like this is the feeling, and this works but it always still feels like Flowerovlove.”

Perhaps the most exciting thing about Flowerovlove is that she still has barely scratched the surface of her potential. “I don’t know when the first album will come out, but I’m not in any rush for it,” she explains. “It’s definitely ready. I always pre-make music, and there’s a certain sound I’m going for for next year, which is already done now. It feels like a home.”

One of the songs she has ready to go could be one to truly take Flowerovlove to the next level. Joyce herself describes it as a song that encapsulates everything about Flowerovlove and what she is trying to say. “There’s this one song that will 100% be on the first album; it’s called ‘Love You’,” she reveals. “I’m very connected to this song, and when it was made in the room, we all said that this is my stadium song. It’s the type of song that has to be sung in a stadium, and it expresses a lot of my personality and what I want to say. It’s not sad, but it has an element of turmoil in it but also absolutely gorgeously nostalgic. This is the most nostalgic song I’ve ever made. The feeling of it is exactly what I want to portray.”

It sounds like 2023 for Flowerovlove then is going to be pretty damn special. Get those stadiums booked. ■